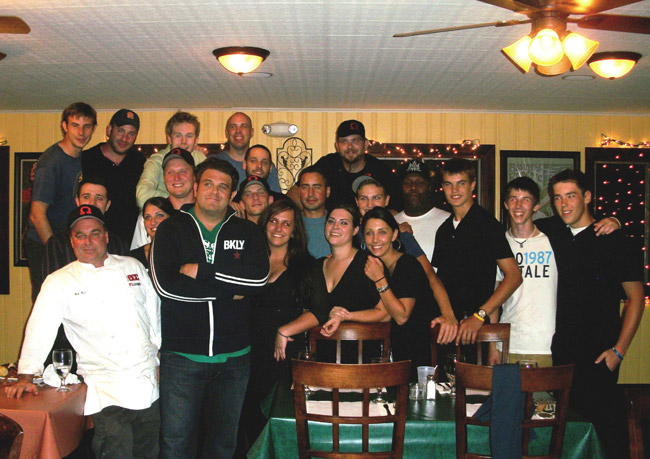 Travel Channel visits WNY for second time in a year

In the battle of man versus food, Grand Island won.

The town, and the Riverstone Grill in particular, will be featured this fall on the Travel Channel as part of "Man v. Food." Show host Adam Richman and his film crew visited the Grand Island restaurant last week to film a segment for an upcoming episode.

On the program, Richman travels around the country in search of unparalleled food challenges (as in, eating 50 chicken wings in 30 minutes, downing 180 oysters in an hour, scarfing up a 12-egg omelet or drinking almost a full gallon of milkshakes). Prior to the culinary showdown, he visits local restaurants to sample popular cuisine. That portion of the show is what brought him to the Riverstone Grill, where he tried dishes including the "Bone in the Stone" steak.

Riverstone Grill owner David Hughes said he and his staff were limited on what they could or could not say about the filming. Still, word got out, and by Thursday evening a crowd was gathered at the restaurant hoping to get a glimpse of the action.

Richman and his team arrived at the Riverstone Grill around 2 p.m. The original goal was to have all filming completed by 8:30 p.m. However, with the temperature outside hovering in the mid-80s, and hot camera lights inside, production halted several times.

"Once we got into the kitchen is when everything started getting crazy," Hughes said. As the temperature there rose to a whopping 130 degrees, Hughes said, "They had to stop about every five minutes for Adam to dab his face and put makeup on.

"The heat really delayed the shooting."

"From the moment he got there, he was really interested in the restaurant and the people there," Hughes said.

"He really seems to enjoy what he does," Hughes added. "He's a really down-to-Earth guy."

Filming continued until about 11:15 p.m. At around a quarter to 11, Richman sat down with Hughes to film the evening's final piece. The two of them tackled the "Bone in the Stone," which is a rib eye steak that ranges from 32 to more than 50 ounces. The meat is butchered and prepared on site, and the finished product comes accompanied by 10 ounces of regular french fries, 10 ounces of sweet potato fries, and corn on the cob.

Hughes said he was initially a little nervous about his on-screen debut. However, "Adam got me into a good zone," he said. "'He really put me at ease."

They both had to film the piece multiple times, as producers and cameramen opted for multiple comments, angles and lighting options.

"It was a unique experience," Hughes said.

The "Bone in the Stone" (from $36, depending on size and toppings) is a newer dish at the Riverstone Grill, and one that Hughes said, "People seem to really enjoy."

Richman had only a few bites on camera but made a special request to have the rest packaged so he could eat it after filming wrapped.

The affable and popular "Man v. Food" host stayed at the restaurant until almost 2 a.m. signing autographs and taking pictures with wait staff and customers.

"It was great; people really enjoyed it," Hughes said.

"(Adam) was really accommodating of everyone," he noted.

That night, and in the week following the TV shoot, Hughes said the response from Grand Island residents was terrific.

"Thanks to everyone on Grand Island who supported us," he said.

The Riverstone Grill episode of "Man v. Food" will air in either September or October on the Travel Channel. New episodes air Wednesdays at 9 p.m., and then repeat throughout the week.