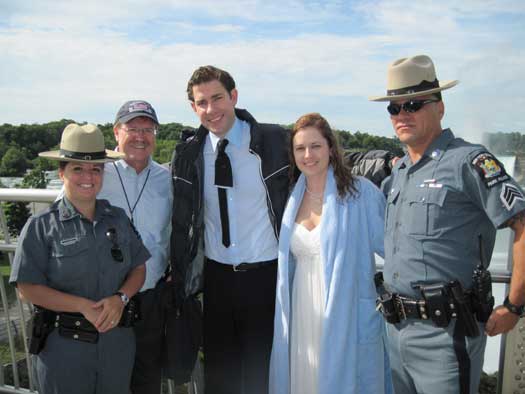 There's no debating the comic value of NBC's "The Office." The Emmy-winning sitcom was created by Ricky Gervais, the godfather of modern TV humor, and is undeniably one of the funniest programs in prime time.

It's also surprisingly romantic. The office workers in the Scranton, Pa., branch of the Dunder Mifflin paper supply company all have big hearts - though they are deeply flawed and socially inappropriate. So, we, as viewers, have become invested in their storylines, and root for their happiness.

At the end of season two, salesman Jim Halpert (John Krasinski) confessed his love for receptionist Pam Beesly (Jenna Fischer), his close friend and apparent soul mate. Though she rebuffed his advance - she was engaged to someone else, after all - the two ended the episode with a passionate kiss.

Throughout season three, Pam realized her mistake and worked to bring a departed Jim back into her life. By year's end, he asked her out on a date. She accepted, and the two were soon engaged.

On the Oct. 8 episode of "The Office," Jim and Pam will wed in Niagara Falls. Their co-workers will be in attendance, as will their boss: the oh-so-off-beat Michael Scott (Steve Carell).

"Jim and Pam decided to get married in Niagara Falls because they wanted a destination wedding that was close to Scranton. Their original hope was that, by making it a destination wedding, their officemates wouldn't come - but of course Michael makes it possible for the whole office to attend," Fischer told "Behind the Screens." "They wanted to pick someplace fun and adventurous, but with a retro appeal.

"Jim and Pam can't afford to get married in Mexico. Niagara Falls makes for a unique wedding at a cost that fits their budget."

At the end of August, the cast and crew of "The Office" came to Niagara Falls to shoot portions of the wedding episode. Angela Berti, who serves as New York State Parks' western district marketing and public affairs coordinator, said scenes were filmed inside Niagara Falls State Park, on the Maid of the Mist, and at the Red Coach Inn.

In addition to what's shown during the episode, Berti said the film crew "did a drive-through of the city for the opening (credits), which I'm so excited to see."

Such an opening montage would take the place of the show's traditional Scranton shots.

"Overall, they couldn't speak more highly of their time here," Berti said of the "The Office" team. "They all had a really great time."

The cast and crew flew in late Wednesday, Aug. 26. They shot all day Thursday in Niagara Falls, and departed on Friday. While the trip was short, Berti said filming generated $35,000 into the local economy.

"That's a pretty big economic impact for a one-day shoot," she said.

"We had a wonderful time at Niagara Falls," she said. "Our first night in town, we ate dinner at (the) Top of the Falls (restaurant). The view was amazing - and so were the chicken wings! Mindy Kaling ordered the nuclear wings. I didn't dare try them, but they were a huge hit at the table.

"We were in town less than 48 hours, but we did a lot. The town is charming, the food was great, and the people were so warm and inviting.

"We rode the Maid of the Mist three times while filming. It's breathtaking. I've never seen anything like it. I would recommend this to anyone visiting Niagara Falls."

To celebrate "The Office," its trip to Niagara Falls, and Jim and Pam's nuptials, the Hard Rock Café will host a special screening of the wedding episode on Thursday, Oct. 8. Festivities will begin at 7 p.m., with the show airing at 9 p.m.

Berti, who coordinated the event with the restaurant, said admission is free (reservations are required), and cake and champagne will be served.

"What we're sort of staging is a wedding reception for Jim and Pam," she said.

Guests attending the event can bid on a number of "Office" prizes, including a cast-signed script of the wedding episode (entitled "Niagara"), and an autographed DVD. Proceeds will benefit Niagara Falls State Park.

"It's a fun way to celebrate," Berti said.