Season four of NBC's "The Voice" kicked off with some promising singers, a former "American Idol" finalist and, well, a whale.

Meet some of the early standouts: 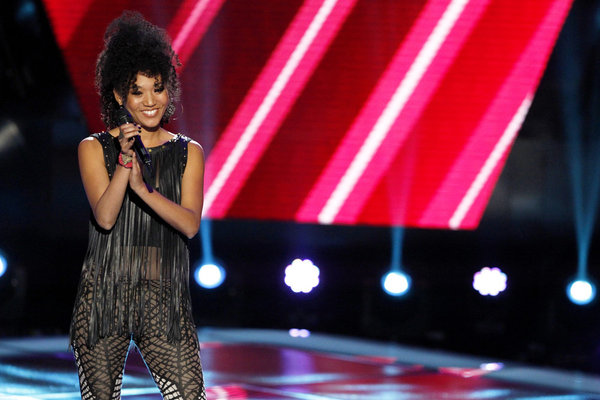 What's more impressive: getting four "Voice" coaches to turn around for you, or singing backup for the late "King of Pop," Michael Jackson?

Judith Hill can claim both.

The So-Cal singer was with Jackson when he launched his "This Is It" tour. When he unexpectedly passed away, Hill performed at his memorial service.

At that time, she had no shortage of interest from record makers. Surprisingly, Hill said "no" to her potential suitors.

"It was a very, very, very sensitive time. I mean, the world was in mourning and, you know, Michael had just passed and there was a lot going on emotionally with me. And I was - I was in a place where I was just overwhelmed and I needed to take some time and really process things and go through my journey," Hill said. "And also just take the time to write more and just, you know, I had a lot of work to do, and I think that it was important to respect the time that we had on stage with Michael and not to come out and try to capitalize on it, but to really just respect it."

Now, just because Hill said no doesn't mean she stopped performing. In the years since her first breakout moment, "I did a lot of woodshedding," she said. "I got in the studio and just did a bunch of songwriting and artist development and worked on my sound and what my sound - what I want my sound to be and just practicing and getting better.

"And I spent a lot of time doing that. The last three years have been primarily that; also singing backgrounds with other artists and making - trying to make a living, you know, trying to do as much as possible to pay the bills and hone in my craft as an artist."

Hill saw the opportunity to audition on "The Voice" as the right time to launch her solo career.

"I feel like I've come to a place now where I'm excited to be on 'The Voice' and share kind of what I've been doing now with everyone," she said, adding, "I'm glad because the time I took away allowed me to really kind of figure out more of who I am as an artist. Because then, I think, at that time, I wasn't really ready and also I just had a lot going on.

"So I think 'The Voice' is now a perfect time for me to come out and - I love the show, because it allows artists to do covers and you have a chance to make your own rendition of songs, and it's such a blast. So I'm having a great time and I'm really excited for this chapter in my life."

After the first week of "The Voice," Hill, 29, was definitely the singer to beat in the competition. When asked if that's an enviable spot to be in so early in the season, she said, "It's hard to tell. There are so many incredible artists on this season. Just hanging out in the hotel and hearing everyone sing has just been incredible and mind-blowing.

"So you've got - you've got a lot of great talent coming in the next (episodes). And this is just the beginning; and I'm just really so blessed and honored to be able to have my audition there like that.

"But, you know, it's a long road and we all just do our best. And I can only do my best and we'll see what happens."

Hill's rendition of Christina Aguilera's "What a Girl Wants" earned her the approval of all four "Voice" coaches. After thinking it over, she chose Adam Levine's "Team Adam."

The Maroon 5 frontman put a hard sell on Hill.

"You are the first person to come on this show and do a Christina song as well as Christina Aguilera," he said.

"I am going to light myself on fire to make sure that you are on my team!" he joked. 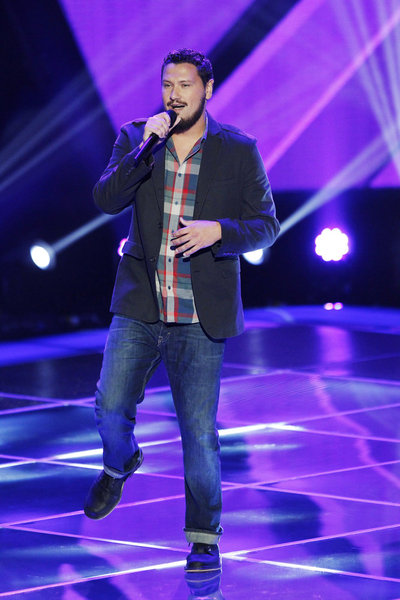 On stage, Mark Andrew couldn't have been happier.

He had a solid backing band, comprised of close friends. The "cohesive unit," as he called it, even performed at some music festivals.

Andrew's drummer was tragically killed in a DUI and his guitar player also passed away.

"I couldn't find somebody to really replace them," Andrew said prior to his "Blind Audition." "It's hard to deal with."

Today, Andrew, 27, is using "The Voice" as a stepping-stone for a solo career. He said the switch from being in a band to going it alone has been difficult, but rewarding.

"You know, it's kind of tough to make that transition," he said. "I've always been in bands and - like, I've done my brother's band for a while and it's - moving into doing my own thing is - it's different than - I don't know, it's hard to explain.

"Just - I don't know, when you - when you step out on your own, it's a whole new experience, because you have to expose yourself and - kind of like your soul to the world. And it's challenging, but it's also exciting at the same time. So I get to - I get to show that part of me, and hopefully people like it."

Two of "The Voice" coaches definitely like the new Mark. Andrew netted chair turns from Levine and Shakira upon his performance of "Knockin' on Heaven's Door." He chose the latter after she said, "I loved your performance from top to bottom. I am so passionate about you. ... I haven't felt this way so far." 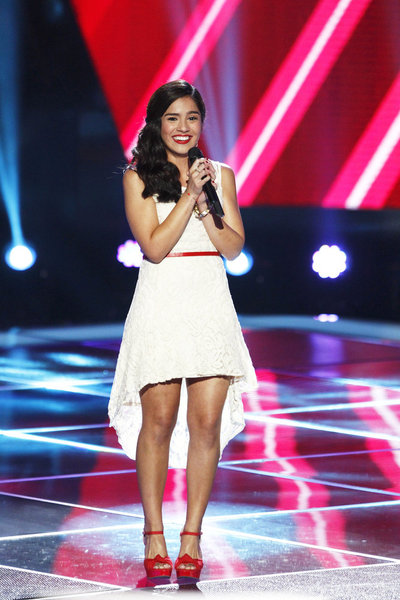 Hands down, the singer with the liveliest stage persona in "The Voice's" first week was 19-year-old Cáthia, who performed in Spanish. She captivated the crowd with her rendition of "No Me Doy por Vencido" ("I will never give up"), and then played with the panel of judges, giving each a joyful shout-out. She even teased Adam, who didn't turn his chair in support of the Bronx native.

Shakira, Usher and Blake each made a case to recruit Cáthia. After some deliberation, the bilingual singer opted to go with the show's own dual-language singing sensation, Shakira.

"As a performer, I guess I just try to go with what feels natural to me," Cáthia said. "I smile a lot, I'm a very bubbly person, and I just want to transmit my positive energy to anyone who is watching me. That's one of the reasons why I picked Shakira, because I know she can help me with my stage presence."

Speaking of Cáthia, Shakira said, "You were phenomenal," and asked the young songstress - in Spanish - to please join her team.

"I am going to have to go with someone I know will understand me," she said. 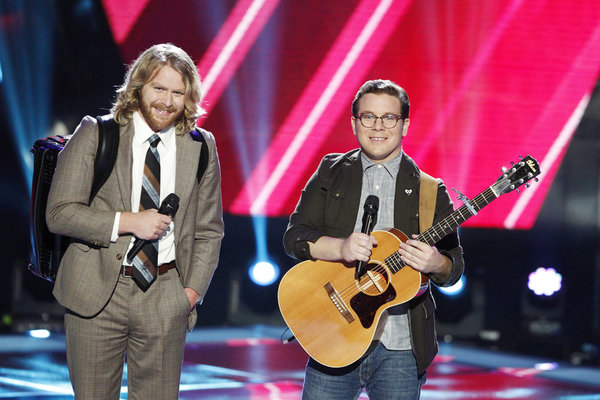 JPL, as he was known when he appeared on season three of "American Idol," said he was reluctant to appear on a second reality singing competition. He agreed to try "The Voice" primarily because he could perform with Hayes.

"I think as a musician, you know, you try to pursue every avenue in front of you, you know?" Lewis said. "And some friends of mine had been saying that I should go on the show. And, you know, I wasn't - at first, you know, I was hesitant because of my history with 'American Idol.' But when I found out that they would allow a duo, I immediately kind of thought that would be really interesting and fun to do, and asked Ryan if he wanted to do it. (Hayes said, "Might as well.") ... That's where our name came from. ...

"It was just kind of like one of those things that the more I thought about it the more I was like, you know, 'Why not? We should give it a shot.' "

Lewis finished eighth on "Idol." This time around, his plan is simple: "To win," he said.

"I mean, I would love to accomplish that," Lewis explained. "Aside from that, I mean, I think this being a different project and not necessarily being about me - it's more of a duo - it's about getting a new project, some recognition, and some exposure."

For most singers on "The Voice," performing for a TV audience is new and exciting ... but somewhat distracting. Lewis, however, knows all about reality television and its twists and turns. That should allow him more time to work on his music.

"Yes, I mean, it definitely gives me the benefit of hindsight, you know?" He said, "I have learned a lot from my experiences there, so I think it helps me out."

"You guys are so good, and so distinct," Levine said.

"There are two people singing together. And there are duos. They are a real duo," he added.