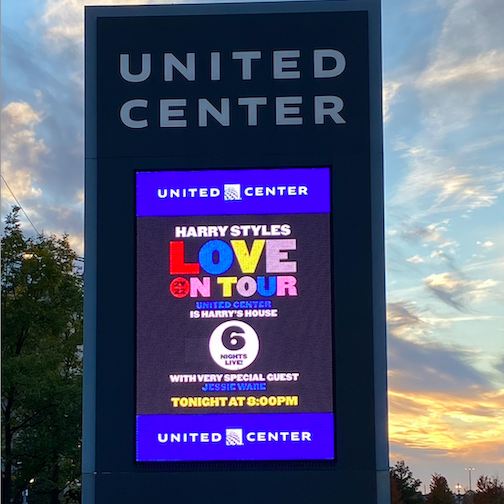 It’s time to twist the night away. It’s time for dancing in the moonlight. Concerts are back and it’s time to lose yourself in the music.

The coronavirus put an end to live performances starting in 2020, since it was difficult to social distance, and large groups of people were strongly discouraged. Now, more and more artists have announced their world tour dates and fans are getting excited.

Pitbull, known by fans as “Mr. Worldwide,” announced his “Can't Stop Us Now” summer tour earlier this year. This was a big deal to many fans because they had been listening to his music for ages and hadn’t had the opportunity to see him perform live. At venues across the U.S., people came from all over to see him, excited that things were starting to feel somewhat normal again. Groups of friends took buses or carpooled to the show and tailgated before the concert. Some fans even showed their enthusiasm by dressing up to look like “Mr. Worldwide.”

Jillian Roggie, 19, of Buffalo, is a long-time fan of Pitbull who attended his concert at Darien Lake in Darien Center in July. “It felt refreshing to finally be able to enjoy social life after not having that many opportunities in a while. But it also felt different and unnatural since I hadn’t been out much due to restrictions from this pandemic,” she said.

Harry Styles, an artist in his prime, announced his “Love on Tour” at the end of 2021 for his “Fine Line” album. Earlier this year, he announced the extension of his tour that would still cover his “Fine Line” album, but would be more geared toward his new 2022 album, titled, “Harry’s House.” Styles’ popularity severely increased and he sold out consecutive nights at multiple residencies throughout the U.S., in arenas such as Madison Square Garden in New York, the United Center in Chicago, and the Kia Forum in Los Angeles.

Some fans purchased tickets to multiple nights and spent money on flights and hotels. His concerts are a major event where fans dress up in 1970s-inspired outfits and boas, make signs, and have fun with friends or make new friends with the people sitting around them.

Lily Dziak, 17, of East Concord, was fortunate enough to see Styles during his “Love on Tour” in Chicago in October. “It was really fun to be in that kind of atmosphere again where everyone could just have fun and get together to watch someone we all love,” she said.

Another well-known artist, Ed Sheeran, who performs a wide variety of music with different musicians, hasn’t toured North America since 2018. Sheeran is one of the most streamed artists throughout the world and has had a growing fan base since the 2010s. He announced the North American leg of his “Mathematics Tour” in early October this year. Sheeran’s tour is attributed to a variety of his music from his “ + ” album that was released in 2011 to his newest album “ = ” that was recently released in 2021.

With all of these artists announcing tours and having full capacity concerts again, competition for tickets has become a massive issue. Although there are several ticket resale sites to buy and sell tickets, when artists announce their tours, most often, fans turn to Ticketmaster for direction.

Depending on the artist, there is an option to register to be a verified fan on the website, which allows early access to tickets. A fan isn’t guaranteed to be chosen to be verified or selected for presale, but if they are, it increases their odds of getting a ticket. Every increase in odds matters when there are thousands of other fans competing for seats at the same show.

Those who are verified and selected for presale receive a code to use that allows them early access to tickets. If you think you can relax after getting an access code, you’d be wrong.

All presale tickets are available to everyone with an access code, and fans have to be as fast as lightning to select them before another fan does. You might think you selected tickets, but when the site finally loads, it will likely say another fan beat you, taking you back to the homepage. Once you finally select tickets and they are transferred into your cart, you have a limited time to officially buy them, or else they are returned to the home page for other presale fans to buy. The whole process can be very stressful, especially for popular artists with large fanbases.

Taylor Swift is the very definition of an artist with a large fanbase, and they have been waiting for her to tour since her 2020 tour titled “Lover fest” was canceled due to the coronavirus. Since her canceled tour, she re-released two of her albums, titled, “Fearless (Taylor’s version)” and “Red (Taylor’s Version)” in 2021. She also released three new albums, titled, “Folklore,” “Evermore” and “Midnights” since the pandemic began in March 2020.

Swift's fans, who call themselves “Swifties,” were anxiously waiting for her to announce a new tour when they saw other artists started playing concerts and were coming back into full swing.

Nov. 1 was the day every Swiftie was probably screaming in joy when Swift announced her upcoming tour, “Taylor Swift: The Eras Tour,” which will consist of songs from all of her albums throughout the years. Her fans were ecstatic about the possibility of seeing her in person and being able to experience a Swift concert.

Fans were registering for presale on Ticketmaster and, those who were lucky enough to be selected, fought for tickets online as if their life depended on it.

With so many fans trying to get tickets at the same time, Ticketmaster kept crashing, resulting in issues when trying to purchase concert tickets. The site crashing and glitching out made the experience of trying to get a ticket that much harder and added an increased amount of stress.

One of Swift’s fans, Lauren Holmes, 19, of Syracuse, shares her Ticketmaster experience trying to buy a “Taylor Swift: New Eras Tour” ticket. “I feel like I was really lucky because I got in right away. Although, once we made it into the seat selection part, it kept glitching like crazy and would say our seats were gone every two seconds. When we could finally check out, we saw that the tickets had such a high Ticketmaster fee. For example, my tickets were originally supposed to be $265, but I ended up paying over $330 for them,” Holmes said.

Many fans choose to buy tickets from other sellers or sites such as Seatgeek. Fans might look on those sites if the Ticketmaster supply is starting to dwindle. The problem with resale sites is that they might not be as trustworthy as Ticketmaster. People reselling also increase the prices, in some cases substantially. For example, StubHub, another resale ticket website, was selling Taylor Swift tickets for way more than face value.

The whole ticket buying and selling process is problematic, especially with high-demand artists who can be seen now more than ever coming out of the pandemic.

Are your favorite artists going on tour soon? With concerts being back to normal and more and more artists announcing tours, fans will have to fight for their lives in the chaotic, increasingly competitive ticket process. As Swift once said, “Let the games begin.”