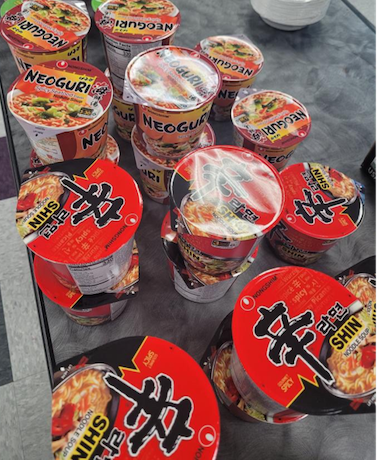 Shin Ramyun is the most popular in Korea. It is made of spicy beef broth, and Neoguri is combined with the thick, udon-style noodles and spicy seafood flavor.

Korean ramyun captures the world with its completely new taste

Hot, Spicy and Red are the pronouns for Korean food. The image of loud red is mainly used for describing Korean food. Koreans have a special affection for spicy food to the extent that they are known as combatants for their spicy taste. The reason is in the hot regions of summer in Korea eating a lot of peppers is common.

When Shin Ramyun, which contributed to the spiciness of Korean ramyun, was first released, there was a stereotype that “Ramen should not be spicy.” This common belief results from the fact that Japanese ramen is not usually spicy because it has a milder and more subtle taste. Korean adapted Japanese ramyun in the Korean way by adding peppers, vegetables and chopped meat. In addition, the term “ramyun” is generally used in Korean instead of the Japanese term “ramen,” because ramen and ramyun are totally different food for Koreans.

After Shin Ramyun is taking the center stage in the Korean ramyun industry, many ramyun companies compete for spiciness and ramyun became even spicier in Korea.

Since “Parasite,” a South Korean black comedy thriller film directed by Bong Joon-ho, debuted all across the world, Korean ramyun started to be in the limelight. 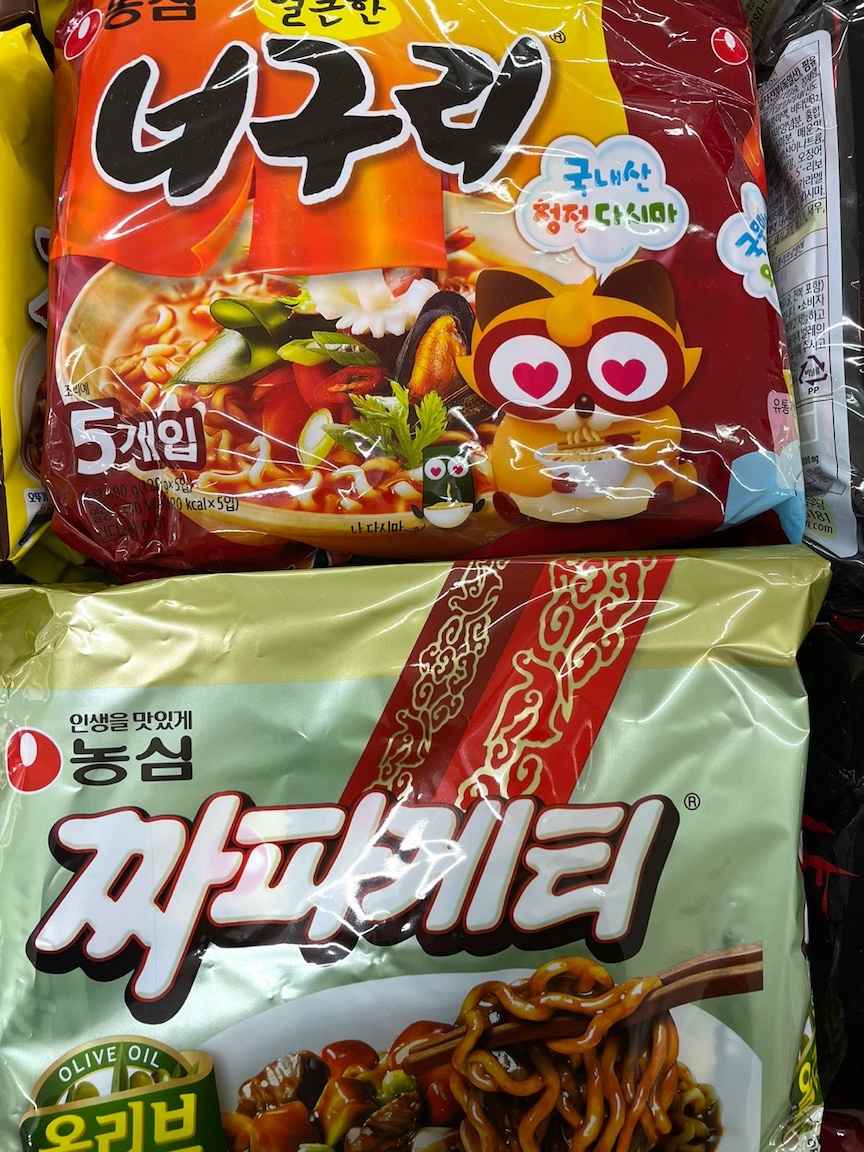 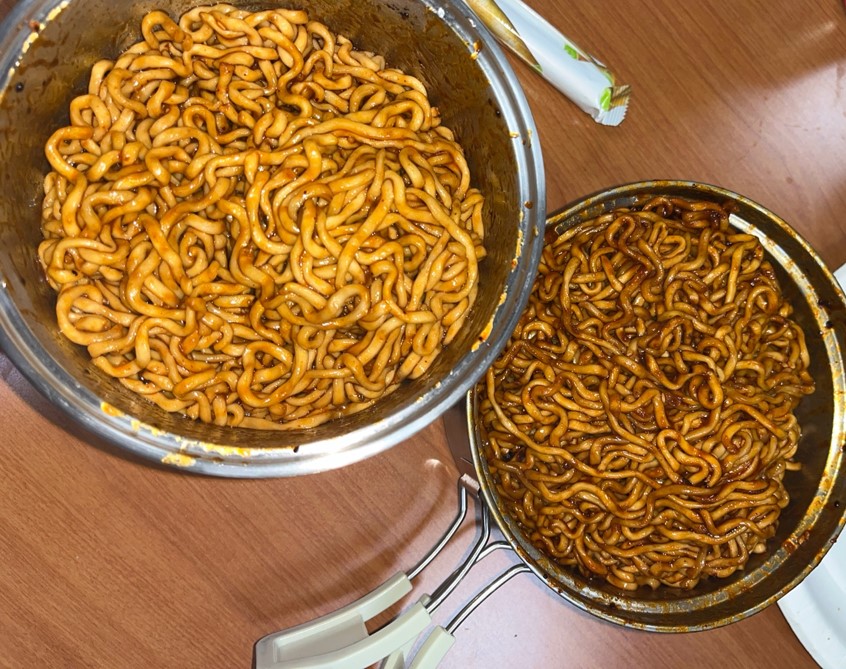 Specifically, Jjapaguri/Chapaguri, is a combination of two different types of Korean noodles, Chapagetti and Neoguri.

According to Wirecutter, Anne Perling wrote in her article, NongShim Shin Black Noodle soup, a noodle with milky and thick savory broth including peppers, mushrooms, garlic, and onions, is placed first. Moreover, Jjapaguri/Chapaguri took third place in this article.

It is not the only reason for the “Parasite” effect, but Korean ramen has a unique taste, which is a strong spicy flavor, and that is the reason why various people from different nations keep buying and eating Korean noodles.

Yeo Do-young, a Kunkuk University student, claimed, “Many Koreans are obsessed with spiciness. It is not too much to say that they are born and grown with spicy flavors. That is why Korean noodle companies always exaggerate ‘spiciness’ when they promote new packs of noodles.”

“Korean ‘spicy’ does not only mean spicy itself, but it is the taste of red pepper powder and other condiments, not the spicy taste of the hot sauce of Tabasco. And it is the reason why foreigners feel a new stimulation of Korean ramyun, because it is a completely different taste that they have never had before,” said Ock Su-yeon, a Shingu University student indicated the diversity of Korean ramyun.

“When I first had Shin Ramen, I think I was 16 and couldn’t deal with any amount of spice in food so, at first, it was hard to eat. But then I started having it more, and it was just so good once I got over the spice level. The flavors were really good; they all mixed very well together. If I could try it for the first again now with a higher spice tolerance, I easily would,” said Michaela, a member of the global leadership program at NU.

For the reason why Korean ramyun captured the global people, Ock Su-yeon said, “I think Korean ramyun is unique in that it is fun to choose and eat because of the variety of ramyun, such as Carbo buldak, Nagasaki jjamppong, Mala-related ramyun, etc.

“Growing impact of media and the global interests of Korea are not negligible. Even before ‘Parasite’ had a breakout hit, throughout the YouTube channel, ‘Korean Englishman,’ Buldak, a heavily spiced Korean ramyun, was introduced to a global audience, and there was a challenge to try it. Also, the growing interest in Korea is increasing thanks to the global hit of Korean culture, such as BTS and ‘Squid Game.’ ”

Yeo Do-young pointed out that it is because Jjapaguri in “Parasite” was a symbolic meaning, so they tried once for curiosity and then challenge other Korean ramyun. She also added, “Combining two other types of ramyun in one bowl became a huge global trend as well, which is what Korean people used to do. Eating combination is another flavor that cannot be tasted in commercial products.” Two other Korean students of NU, Kim Ju-hyeon and Lee Yoo-rim, also commented on combining two other ramyun: normally, one type is high spicy noodle and the other is not spicy, is for neutralizing the degree of spiciness. And they think it is derived from an instinct to create something new or make original “cuisine,” not a ramyun anymore. “People feel proud when they create their own ramyun recipe, so that is why they keep challenging,” said Kim Ju-hyeon, a Korean exchange student at NU. 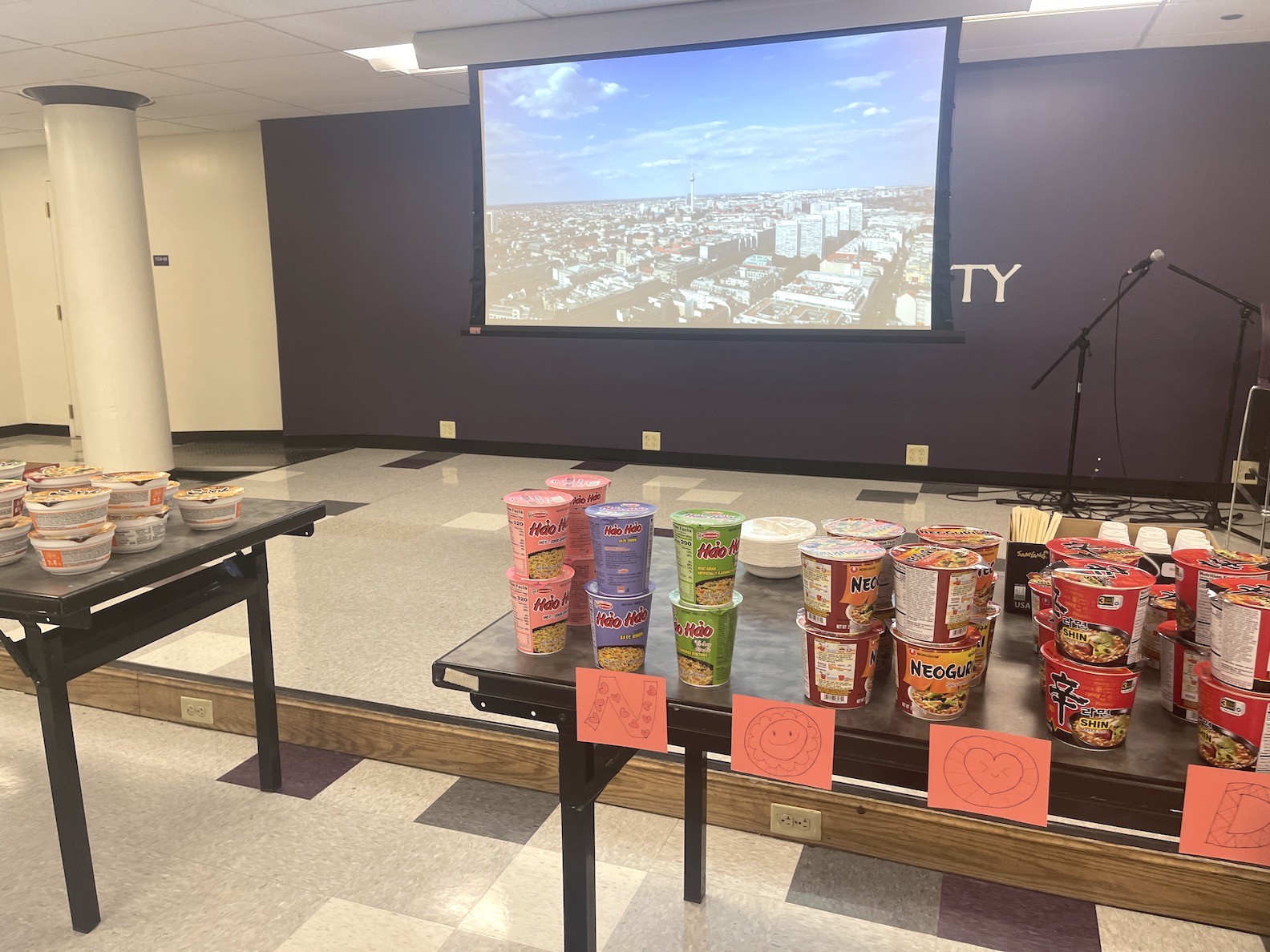 More than 30 students came and enjoyed ramyun, especially Korean ramyun. Students challenged their spice level. One of the students who tried Shin Ramyun for the first time, and said he was embarrassed by the high level of spiciness.

“It was too spicy for me, so I really sweated. However, it was delicious. I was so surprised that other Koreans were eating it very calmly. I think Koreans are relatively stronger than other people in terms of spicy food,” said Shinnosuke Ouchi, a Japanese exchange student at NU.

“When I ate Korean ramyun for the first time, I felt it was spice, but I could bear it. Comparing it with a Vietnamese ramyun, Korean noodle is thicker,” said Van Anh Quan, a Vietnamese exchange student at NU.

“Korean ramyun was the top popular on noodle night, so we prepared several different kinds of Korean ramyun but all of them ran out very quickly. I did not expect that many people would come and they have an interest in ramyun, especially in Korean ramyun,” said Cho Yu-jeong, a global leadership student at NU.

For Korean, ramyun is not instant meal but more than soul food. For people around the world, it became a medium of new flavor.

For more information about the global trend of Korean ramyun, visit https://thetakeout.com/all-about-ramyeon-the-korean-comfort-food-that-s-more-1846338956, and more details about the term “ramyun” can be found at https://www.koreaherald.com/view.php?ud=20220829000604.