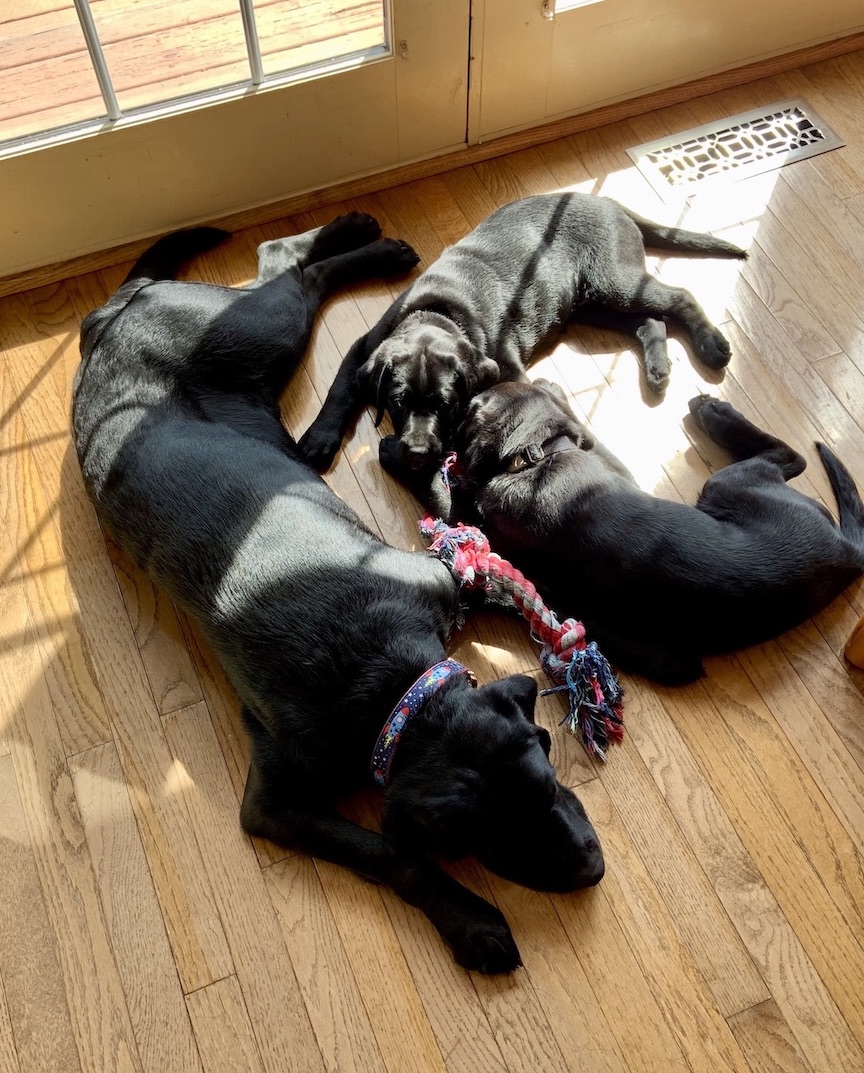 Rocket, Chait and Dickens: The three puppies the Coyne family trained with Guiding Eyes for the Blind.

Turning puppies into heroes: How Guiding Eyes for the Blind is changing lives

If there’s one thing parents encounter, it's the “Can we get a dog?” plea from their kids at one time or another. Chris Coyne and his family were no different.

Around 2015, his stepdaughters had been begging him and their mother to get a puppy, full-heartedly believing they had what it took to take care of one. However, Coyne and the girls’ mother, Kristie Robertson-Coyne, were hesitant, as they didn’t want a permanent dog. So, they looked for other options.

After doing some research, they stumbled upon Guiding Eyes for the Blind and its puppy raiser program, not knowing that their lives would be forever changed.

Guiding Eyes for the Blind is a nonprofit organization that provides and trains guide dogs for people with vision loss. For over 60 years, it has strived to connect seeing-eye dogs with visually impaired people to help them regain freedom in their everyday lives.

“It was one way that we could raise a puppy and, in a huge way, make a difference for somebody,” said Coyne, a three-time puppy raiser for Guiding Eyes for the Blind. “It was a grand opportunity to teach the kids the importance of giving back, and the importance of picking up something that you love and sticking with it.”

In order to actually start puppy raising, however, there are several requirements that a future raiser must satisfy before receiving a dog. Some of these requirements are filling out an application, going to at least three basic training classes, completing a “background check," participating in an orientation and puppy-sitting for another raiser.

One of the most important requirements is the “house check,” where the regional coordinator of the specific chapter will check out the house and make suggestions to make sure it is safe for the puppy.

“It’s very similar to baby-proofing your house,” Livingston said. “Putting wires out of reach and pointing out obstacles that might be dangerous to the puppy, stuff like that.”

For Guiding Eyes to the Blind, the puppy’s safety and security is the most important thing.

Soon, the raiser will receive their puppy and the “training” begins. Although, according to Livingston, it is the raisers that are being trained, not the puppies. People do not need any experience to be a raiser, as Guiding Eyes for the Blind will teach them everything they need to know. Puppy raisers just need to come equipped with an eagerness to learn, and the time/ability to give the puppy the proper training that they need. 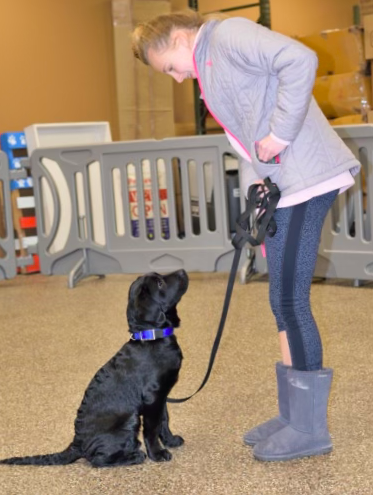 Rocket training with one of Coyne's stepdaughters.

Guiding Eyes for the Blind uses the Successive Training & Enrichment Program (STEP) to train the puppies, alongside positive reinforcement and food rewards. STEP focuses on building a trusting relationship between raiser and puppy, as the puppy learns essential skills in sequential steps.

“We allow our dogs to make the right choices,” Livingston said about the STEP method. “The more often you allow your puppy to make the choice on its own, the more embedded the behavior will become down the road. The puppy is much more likely to perform a certain way if they made that choice on their own.”

Final training is completed at the Guiding Eyes for the Blind campus in Yorktown Heights. Here, the puppies have their In-For-Training (INF) test, which reviews their medical history and progress, as well as evaluates them through practical tests.

This designates each puppy’s future, as the successful puppies may go one to formal guide dog training and/or be a part of the Brood Stud Program, which deals with the breeding of potential new guide dogs. 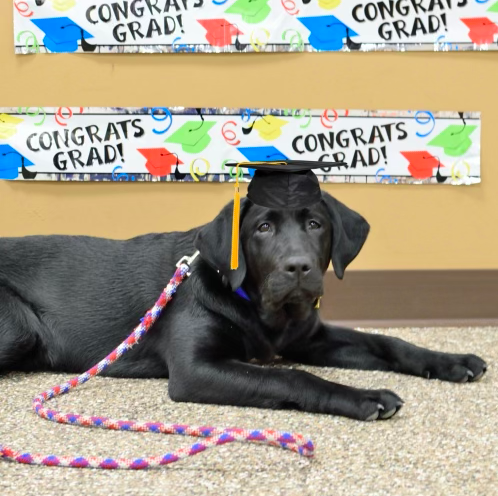 Rocket at his graduation from his initial training.

At graduation from formal training, the puppies are matched with their visually paired person and the raisers get to see their puppies all grown up.

“I think it’s probably one of the toughest things you have to do,” Coyne said. “But hearing from other individuals whose lives were changed by the puppies you raised makes it easier.”

“It’s like the best feeling that you could imagine,” Livingston said. “Of course, you feel a little sad, but I think the overwhelming feeling is a lot of pride.”

Terry McCann, a visually impaired man, received his guide dog, Mac, through Guiding Eyes for the Blind. Since they first met on Nov. 16, 2016, McCann and Mac have been inseparable.

“It was amazing,” McCann said. “It’s like he had been expecting to meet me and he ran over and jumped on me.”

McCann’s life has changed completely since he has met Mac, as he finally has the independence he has sought for a long time.

“The change has literally been from feeling very limited with just the white cane skills, to being able to travel everywhere practically,” McCann said. “I have a lot of freedom in my own community.”

A study done in Austria found that visually impaired people with guide dogs felt more confident in their health and ability due to the independence that they were given.

For the puppies that did not become seeing-eye dogs, however, there are plenty of other options. They can go on to become bomb-detecting dogs, search-and-rescue dogs or therapy dogs.

“I think dogs are greatly underused for what their potential is,” Livingston said. “I think we’re only just now starting to really understand what positive roles dogs can play in our lives.”

The puppies that are taken out of the program due to medical issues can even be offered back to the owners as a personal pet before being up for adoption by the general public.

Guiding Eyes for the Blind has provided over 10,000 people with guide dogs since its birth in 1954 and has impacted even more individuals.

“I think it’s a very honorable and rewarding thing to do for both the puppy raiser and the person that ends up getting the dog,” McCann said.

“It has definitely given me more confidence, especially with my own business, as I’m a professional.” Livingston said. “This is a wonderful way for me to help people by doing something that I really enjoy doing.”

“Puppy raising is a great opportunity to learn about visually impaired/blind individuals and organizations,” Coyne said. “People struggle to connect with individuals that have disabilities, but they aren’t different from us, they are still fascinating people to get to know.”

If people are unable to raise a puppy, however, there are still many ways to support Guiding Eyes for the Blind. Some other ways to help the organization are through donations, volunteering, and through puppy sitting.

“There’s a lot of people that don’t want to give up a dog, and I understand that,” Coyne said. “But they could try puppy sitting, which is an integral part of the organization.”

The first of three dogs that Coyne and his family trained, Rocket, was able to stay with them permanently after a liver shunt had stopped him from progressing onto final testing. So, as ironic as it is, Rocket became the permanent dog they had sought to avoid. Now he is one of the most beloved members of the Coyne family.

For more information about Guiding Eyes for the Blind, go to https://www.guidingeyes.org.