The Island Shoppe's new location on Grand Island Boulevard is visible from a busy intersection.

As visitors enter the Island Shoppe, at 2335 Grand Island Blvd., they are greeted by a large, pink Christmas tree placed in a predominant position. The store’s owner, Josephine Ciffa, explained why she decided to put a personal flair on the Christmas tree concept.

“Last year, we had a lot of fun selling ornaments. I had a small Christmas tree,” Ciffa said. “I figured that I’d step it up, and why not make it pink and just fill it up with whatever we can? There’s more than just ornaments. We’ve got hats, socks, gloves, a bunch of fun things on it.”

Ciffa said she was feeling enthusiastic about kicking off the Christmas season on Small Business Saturday, set for this weekend. 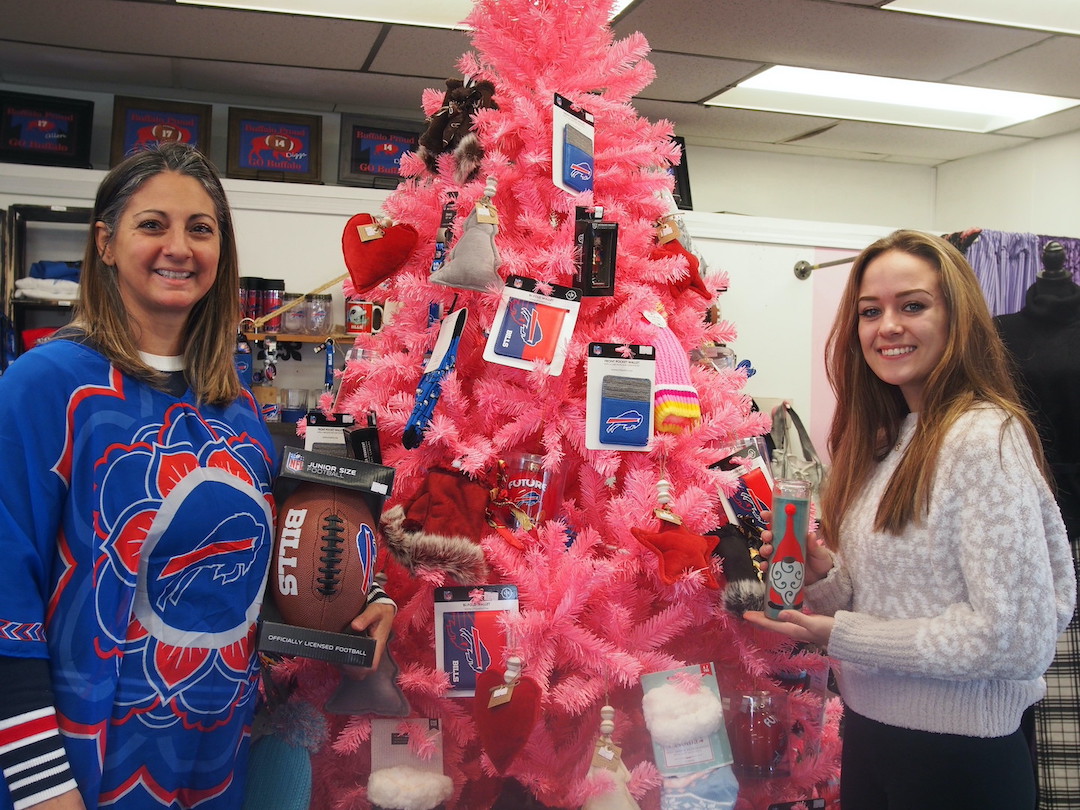 Josephine Ciffa and Libby Madigan show off merchandise and a pink Christmas tree.

Libby Madigan, who works in the store, said, “I am so excited for it because I remember last year when we had Black Friday. Everyone was coming in, and we had really good sales. Christmastime is my favorite here because we make everything Christmas. Everybody does their Christmas shopping. Even in October, people come in and say, ‘I’ve got to do my Christmas shopping here. I’m so excited.’ ”

To make the Christmas shopping unique, the store will offer many selections from local artisans, Ciffa said. “We have a lot of local artists, with everything from watercolor painting to handmade jewelry, oil on canvas, and mixed media. They are mostly Islanders, but we have a few people from the city. We have graphic artists, too.”

Local artists with gifts for sale at the Island Shoppe include Dennis Upton, who makes planters and hot pads; and Kath Schifano, who makes desktop calendars with a different print of her paintings for each month of the year, among others. There are also decorative loaves of bread, made by Pat Shaw.

There are also selections from the Grand Island Candle Company for sale at the store.

Everything Grand Island also sells an assortment of clothing.

“We have a little of everything, from kids to adults,” Ciffa said. “I do have more men’s, because of all of the hoodies and football gear and socks. We’re doing very well with the Buffalo football apparel, from T-shirts to hoodies. I’m trying to incorporate dress clothing, casual dress clothing, because we don’t have anywhere on the Island for that.” 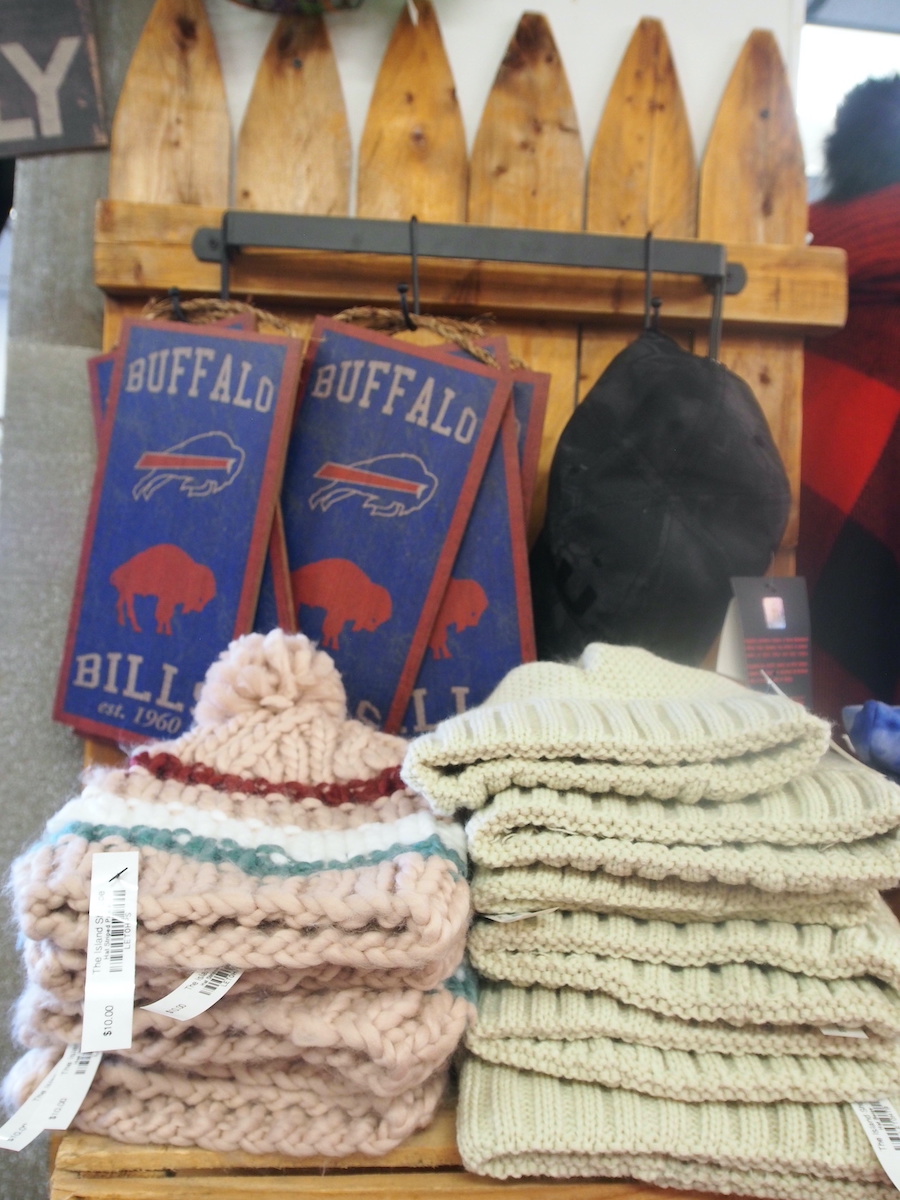 There is plenty of Buffalo Bills gear and warm apparel available at the Island Shoppe.

In addition to the gift shop, Ciffa owns a CBD company, which she created five years ago. “It is my product’s label, but I have manufacturers in Niagara Falls and Nevada do my producing for me, and we’ve been working with these companies for the past four or five years. The products are unbelievable.”

Everything Grand Island had previously been located on Baseline Road and, early in September, moved to the building that had housed Adrian’s, which moved across the street in May of 2019. “I love being right in the middle of the Island. There is very high traffic here. They don’t miss it. I love the building because it’s all wide open. I think that this location, this building for the future, has a lot of potential,” Ciffa said.

The response to the store has been positive, Ciffa said. “I feel that everybody loves it. A lot of customers come in and say that it’s well overdue. It’s what the island needs. As they’re walking out, they turn back and say ‘I love it here. See you later.’ It’s a warm feeling.”

Ciffa said she has a passion for owning and operating retail stores and that she has been in business since she was very young.

“I love the retail business,” she said. “I love meeting new people. My first business was when I was about 19 years old. I had a hat store in North Buffalo. I’m very inspired by fashion, and I want to share that with everybody. I want to bring my ideas and share that. I love making things. I’m an artist at heart. This is my passion. This is what I’ve always wanted to do. Through the years, from then until now, I’ve had a couple of different stores and boutiques. I had one in the Grand Canyon, a souvenir store. So, I’ve got a lot of experience with it. I enjoy making things and people enjoying it when they buy it.”

Madigan said, “I absolutely love it here. It’s awesome. I love how we change everything out for the different seasons and how happy everyone is when they come in. We definitely needed this on the Island. It’s a nice feeling.”

After Ciffa moved to Grand Island in 2009, she opened a store on Grand Island Boulevard called “Lilacs for Lucy.”

“It was a little boutique, all hand-crafted. Stuff that I had made,” she said. “In the back, I used to do our classes. I used to have theme parties for kids and stuff. Its timing wasn’t great for me because the kids were young. There were different situations involved. I did it for a year and a half or so. And then, I got involved with other things. So, the idea for the Island Shoppe was always there. We created our CBD company five years ago. I wanted to continue doing what I was doing with the CBD, so I was thinking, ‘Let me do a gift store again.’ That’s what I really love.”

Ciffa said her hopes for the future of the Island Shoppe include expanding it, to give it more room, and to give customers experiences.

“I’d like to put some chairs and some tables out there and encourage the community to come and hang out back there,” she said. “They can read a book or have a conversation with somebody. A friend of mine donated a hand-crafted wooden chess board. I’m going to make a table out of it (for people who) want to come out back and play chess or checkers. The future goal would be to enclose it, to winterize it, and to open up this back to it so it’s all one. I don’t know how soon a future that would be, though. As the weather changes and the winter passes, I will utilize that for the community as it is, the way it is now.”

Encouraging more local artisans to sell their wares in the Island Shoppe is also another one of Ciffa’s goals. “Come on in. Bring some of your materials. Let me look at them, and let me make room on the shelves for them. We want to show your artwork. There’s probably 50-50 here. Local artists and corporations. Eventually, it would be nice to go all local artists at some point.” 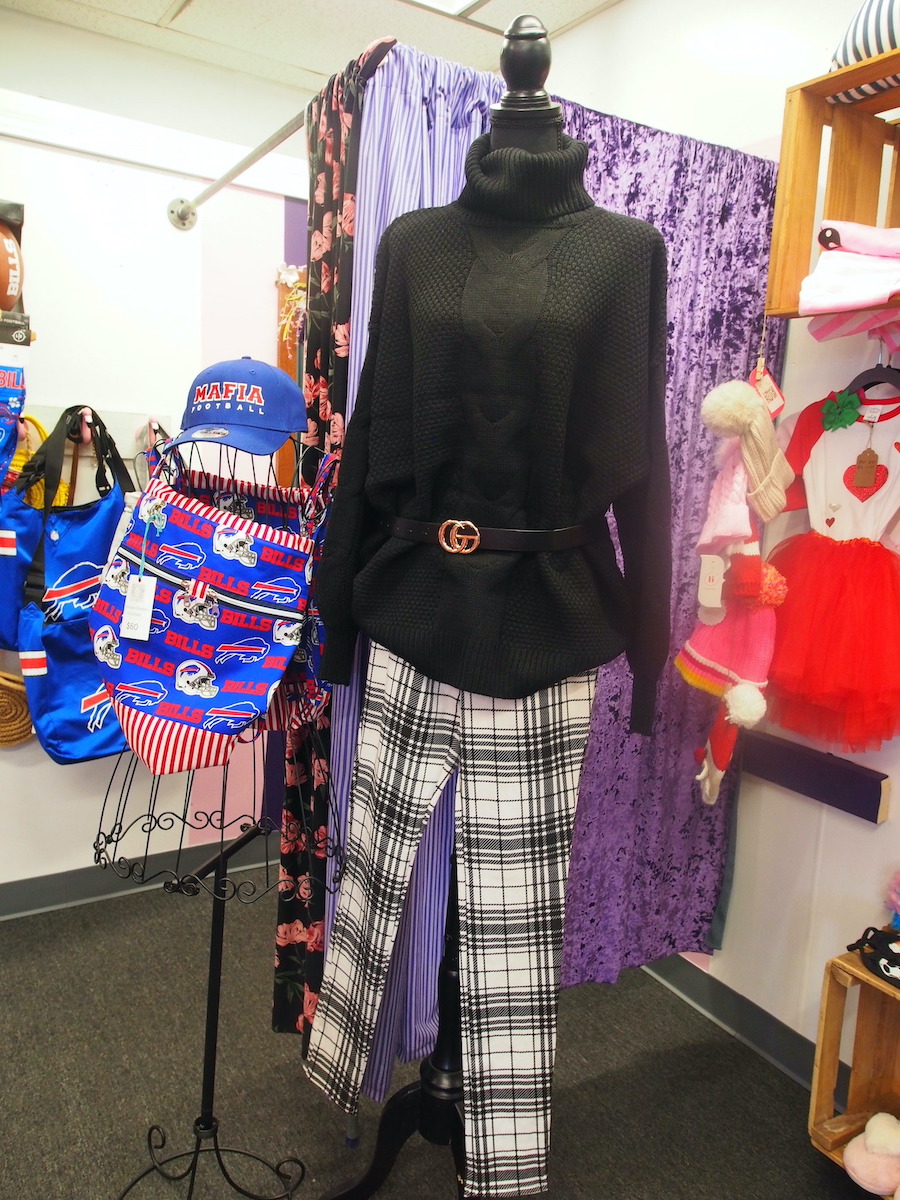 For people who want to try on clothing, a small fitting room is available.