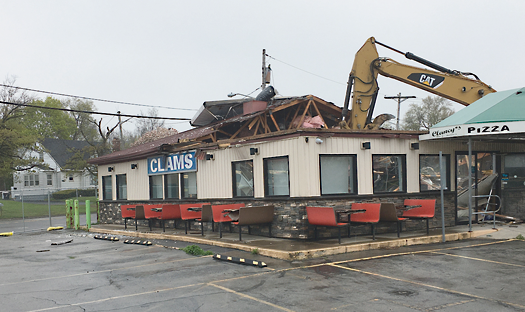 Last Thursday, demolition crews began tearing down the vacated structures located at 7001 Packard Road in the Town of Niagara. The location was most recently the site of Clancy’s Restaurant. However, for many locals, the location will forever be remembered as the home of Page’s Whistle Pig.

The site, which has been vacant since 2019, is set to become a Speedway gas station.

“It was a great place when it was up and running and flourishing but, unfortunately, it has been an eyesore for a number of years now, and we’re happy we can move forward with a new project,” he said. “I think – even though a number of folks aren’t happy with the Speedway – I think they're gonna like the sight of that more than what's been sitting there for a number of years.”

Once the demolition began, many residents took to social media to share family photos and memories from the historic spot. Although the business was closed for years, the memories, it seems, were still fresh.

“Making whistle pigs for dinner. Almost like a memorial dinner,” said another.

In a phone call with the Tribune/Sentinel, Clancy’s owner Don “DD” Spacone also shared nostalgia for the iconic location – not simply for the time he spent at the location managing his own restaurant, but also as a resident who enjoyed the Whistle Pig tradition growing up like so many others.

“I’m sad to see it go. We all went there when we were kids, going on the rides and all that. It was really the place to be when we were growing up,” Spacone said.

After the demolition began, he said he was immediately inundated with calls from friends and neighbors who said they couldn’t believe the site is actually gone.

“I was up to 40 phone calls of people calling me, and calling me and calling me: ‘You won’t believe what they're doing (to the Clancy’s/Whistle Pig site). We gotta go – you think it’s OK to go over there and get a brick?’ You know, as a souvenir? I said, ‘Go, go; take a chance; get one.’ I did!” Spacone laughed. “But I mean it, I stopped counting at 40 calls; but that was the history of Niagara Falls. You're talking about the Whistle Pig, man! Whistle Pig and Clancy’s!”

Spacone detailed the site’s history and explained the remarkable path that led to his own tenure at the location.

Pete Page and his son, Bernie, first opened Page’s Whistle Pig in 1939. Named after the eatery’s trademark bacon-wrapped hot dogs smothered in cheese, the Whistle Pig quickly became renowned in the area as a premier summertime spot for both great eats and – through its adjoining custard stand – ice-cold treats. Not long after opening, the Pages added several amusement park-style rides for youngsters, including a carousel, a wet boat ride and even a helicopter ride that soared through the air.

The company was a popular seasonal mainstay in the area throughout its run until 2003 when Peter Page, the founder’s grandson, announced the family was selling the restaurant as well as the popular amusement rides. The business remained on the market for three years until the building and naming rights were sold to Tim Shiah, a Niagara Falls resident. After extensive repairs and renovations, Shiah reopened the Whistle Pig in 2011 where the restaurant enjoyed a pair of strong seasons.

Despite the success and Shiah’s plans to purchase the rides back, health issues forced him to close the restaurant again. This time it would be permanent. Shiah passed away in 2015.

It was around this time Spacone was coincidentally looking to move on from the Clancy’s location at 16th Street and Pine Avenue, where it had stood since 1985. As Spacone tells it, the popular sports bar had its own intriguing history before making its way to the corner of Packard and Military.

Prior to opening Clancy’s, Spacone first ventured into the restaurant business as the owner of a north-end eatery called the Delmar Grill for 10 years. Later, he purchased the Hitching Post, located at 1416 Hyde Park Blvd., from its founders, the Donato family. The Hitching Post – well-known for having a train car out front, which had been converted to a unique dining space for patrons to eat in – was a popular establishment upon opening in the 1940s. Spacone even claims the eatery was the first to bring beef on weck to the Falls.

But despite its popularity, Donato always longed to move operations to Pine Avenue.

“I’m an Italian kid from Niagara Falls. I always wanted to be on Pine Avenue!” he explained.

He sold the Hitching Post to Joe Anderson in 1985 and founded Clancy’s, which went on to be a popular sports bar in the area. The Hitching Post went on to change hands a few times over the years before it eventually settled into what it is today: Porky’s Hot Dogs – now a summer staple in the Hyde Park area.

It was in 2011 when Shiah, a longtime friend of Spacone, approached him to see if he wanted to move Clancy’s into the Whistle Pig restaurant space. Spacone agreed and sold the 16th Street location to Buffalo-based real estate firm Ellicott Development. Not long after, Ellicott Development also purchased the entire Packard Road property from Shiah.

Spacone entered into a lease agreement for the restaurant portion of the property, added a bar and, for the first time, utilized the space year-round rather than seasonally.

He described the six years spent there as “wonderful.”

A year-and-a-half ago, Ellicott Development announced it was selling the property and bought him out of his lease agreement. Spacone said the buyout was significant enough that he was essentially able to retire.

“It worked out good. I mean, I was 64 years old. I was ready to retire anyway,” he said. “I’ve been in for 43 years in the bar and restaurant business.”

While there are certainly things he misses – like the regular excursions to travel and watch the New York Yankees, which Clancy’s organized and sold tickets – the timing of the buyout turned out to be a blessing in other ways.

“I got lucky; I mean, I got out at the right time,” he said. “(The buyout) happened right before the pandemic started. I was blessed.”

In terms of future plans, Spacone said he doesn’t rule anything out for the future.

“I do miss it,” he said of the restaurant business. “I mean, I’m enjoying (retirement), but I've been doing this for 43 years, you know? Maybe after all this pandemic stuff goes away, who knows? I mean, I still own the Clancy’s name. I could use the Hitching Post name; I never sold the name. I even own the Whistle Pig name. I bought that; I was incorporated with that name. So, I got a lot of (stuff) going on for me. At the same time, I’m 65 years old. I can’t say I’d jump into something right now. So, I just don't know. …

“But I’m proud of what I had, I was lucky. To come from where I came from. … I was at historical places. I’ve owned landmarks in the area. I’ve been lucky. Very lucky.”

While the buildings are gone forever, a whole new generation can still experience some of the magic and fun that made Page’s Whistle Pig so special.

When the Page family gave up the restaurant in 2003, some of the rides were sold to the Herschell Carousel Museum in North Tonawanda. Interestingly enough, it was the Allan Herschell Company that actually produced those same rides in the 1940s and ’50s.

The rides are now part of the museum’s ​Kiddieland Testing Park Exhibit, where they can be ridden and enjoyed just as so many generations of Western New Yorkers had done in the past.

Kiddieland will be opening for the 2021 season on Memorial Weekend, Saturday, May 29.

According to the museum’s website, “Due to the COVID-19 pandemic, Kiddieland will require a reservation to ensure proper cleaning, capacity, and the following of NY State guidelines. Kiddieland is an additional $5 per eligible rider (children between 34 and 52 inches tall). Each Kiddieland add-on includes up to two adults (who may ride the helicopter ride) at no additional cost, are for 30 minutes, and assures that each rider can ride each ride at least once within their time slot.

“General admission to the museum is required (for non-members); Kiddieland is not a stand-alone attraction.”