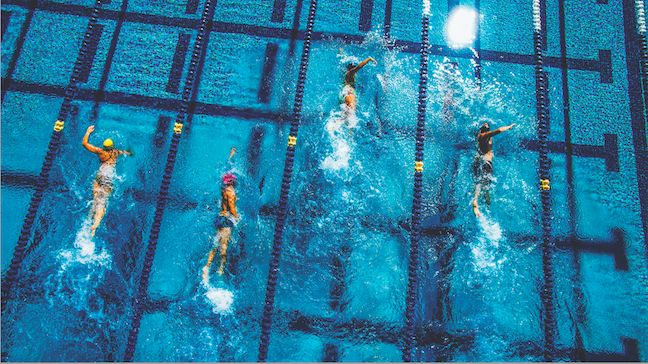 Winter has dealt us a fair share of blows. The holiday season was sure different this year and, at certain times, it really didn’t even feel like the “most wonderful time of the year.”

Despite all the travesty in the world today and not much to look forward to as the dark winter continues, the local high school sports community received a bit of a boost this past week.

While there isn’t many rifle or skiing teams around our local area that come to my knowledge, majority of our local high schools in the Niagara Frontier will be eager to begin their bowling and swimming seasons.

In a press release from Section VI, President Brett Banker said, “We are excited to begin the winter season for the low- to moderate-risk sports. We are very excited for our athletes, coaches and families. Athletes across our region will be able to return to something that is so important to them.”

I can say, athletes of these sports are also excited.

On Tuesday, when the news broke, a student of mine at the school I work at was excited to tell me, “Bowling starts next week and our matches begin shortly after tryouts!”

The excitement in that statement really made me realize even more just how important high school sports are to our local student athletes.

That being said, a lot will be expected of athletes due to the quick turnaround, especially swimmers who need to be in good shape for meets. I mean, can you imagine not being able to swim for months, then being told, “Hey, time to head to a meet!”

Despite the expectations, it’s likely that all participating athletes will be ready to accept the challenge of maybe just a few tryout days, a couple practices and then, boom, right into matches/meets.

In addition, schedules will be much more condensed than usual. For example, one local bowling team has its first match the day after its final day of tryouts, meaning tryouts are also essentially practices.

For the sports starting, it should be an intriguing month to month-and-a-half of competition.

I’m also very intrigued if a trend I noticed in fall will turnover into the winter, as well. During the fall season, for example, guys who would usually play football transitioned to golf this year, because there was no season on the gridiron. While there’s still a glimmer of hope for other winter sports like basketball and hockey, it’ll be interesting to see if some bowling or swimming teams get new faces to the sport due to the lack of other athletic opportunities.

And, although, some of you might be excited to go out and see one of these low-risk sporting events, the Section VI executive committee voted that no spectators be allowed at contests for bowling, swimming and rifle this season.

Speaking of high-risk sports, Section VI is still holding confidence that those seasons will eventually come to fruition. If they’re going to happen, though, they need to happen soon as, before you know it, schools will be heading into the spring seasons as the calendar turns from February to March.

In the press release, Banker added, “We welcome and are ready to begin high-risk sports, as soon as we receive approval from Albany. Members of the executive committee are confident that member schools, athletic directors, coaches and athletic trainers can provide the same safe and nurturing experiences that we did in the highly successful fall season.”

A lot of local high-risk sport athletes, coaches and parents have grown frustrated over the lack of progress in New York, while other states have been playing sports like basketball for months now.

According to a map on MaxPreps.com, New York is one of three states that currently has basketball season as to be determined. Only one state has canceled winter sports in their entirety: Hawaii.

With some sports not playing, some elite athletes around Western New York have decided to transfer to other schools around the country to get playing time.

For example, Lewiston-Porter junior Roddy Gayle Jr., the No. 1 basketball recruit out of New York for the Class of 2022, transferred to Wasatch Academy in Utah. Wasatch is the ninth-ranked HS team in the country and Gayle just started for them Tuesday versus No. 3 Sunrise Christian Academy – also the home of Niagara Falls baller Willie Lightfoot. Despite a loss for Wasatch, Gayle, in just his fourth game with the team, starred with 16 points.

He went from having no season here, to playing some of the top competition in the country within just a couple weeks.

As a high school sports reporter who loves this season, I definitely hope we see some action on the court or ice sometime soon. A lot of old videos and tweets have popped up on my TimeHop app to remind just how much I enjoy the winter season and everything it brings. And I know, if there is a high-risk sports season, it’s going to be quick and condensed, but I will thoroughly enjoy it.

Do your part during these tough times! Stay safe and we’ll continue to fight through these difficult times.