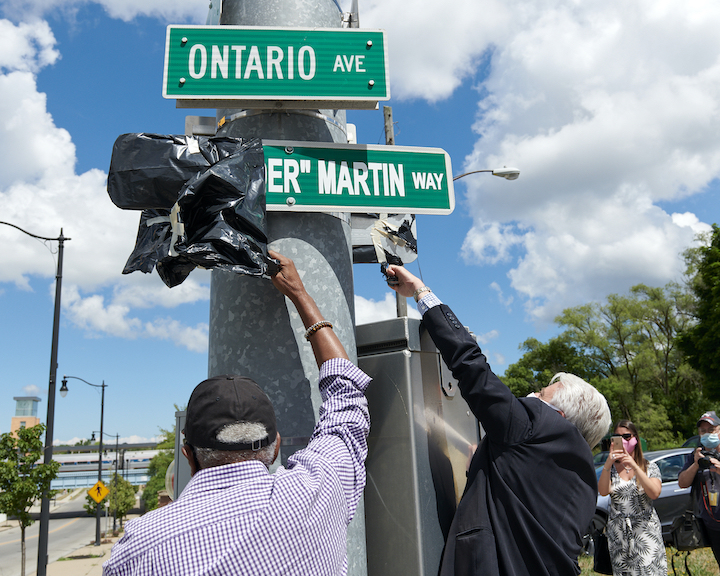 On Friday, the City of Niagara Falls commemorated the life and career of a local jazz and R&B musician, John “Spider” Martin, by designating the corner of Ontario Avenue and Main Street with the honorary name of “John ‘Spider’ Martin Way.”

Mayor Robert Restaino and members of Martin’s family were on hand to unveil the new street sign and express how much his legacy means to the city.

“He’s had an impact, not only locally, but nationally,” Restaino said. “We're here to commemorate that, celebrate his achievements, and remember him for all of the wonderful things – and the great attention he brought to Niagara Falls.”

The intersection was chosen because it was close to the site of the Ontario House, a fabled jazz nightclub where Martin, a gifted saxophone player, first made a name for himself. The Ontario House opened in 1945 and was popular throughout the 1950s and ’60s.

The street is also a short walk from a large mural of Martin, painted by local artist Edreys last year as part of the Niagara Falls Murals Project. The mural depicts Martin from the cover of his 1977 album “Absolutely.”

Martin spent many of his early years living in Niagara Falls before he eventually left to attend the Manhattan School of Music. From there, his reputation grew and he began finding regular work with some legendary musicians including Aretha Franklin, Etta Jones, William Pickett, Joe Jones, Johnny Smith and Nat Adderley.

“These names are the fundamental fabric of music for generations,” Restaino said. “They not only impacted the music of their time, but they impacted music going forward. And our own John ‘Spider’ Martin was right there along with them. This is a man who had the opportunity to grow up out of this city of ours and do great things.”

After years of touring, Martin later returned to Niagara Falls where he recorded several albums on his own. His return also brought many national artists to the Niagara Falls music scene, particularly to the Ontario House, which saw performances by jazz legends Dizzy Gillespie, Charlie Mariano and Lee Konitz.

Eventually, Martin shifted his focus to mentoring and educating students. He co-founded the Production Center for the Arts in Florida, was active in charity work, and hosted several concert series, including the Marathon for Cerebral Palsy. In his later years, he also composed and performed with the Rochester and Buffalo philharmonic orchestras. 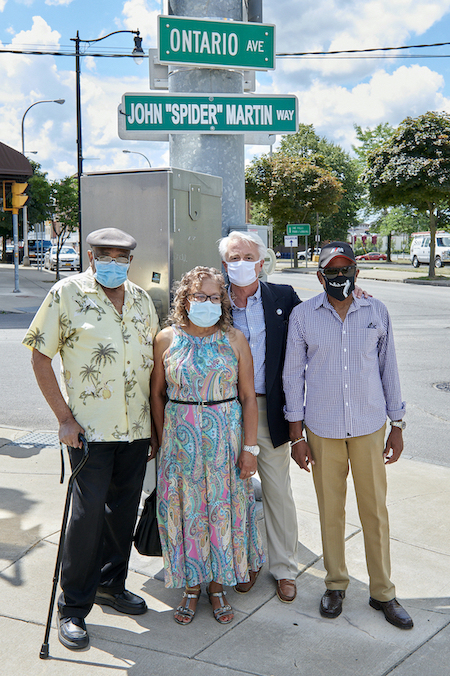 “You know, the City of Niagara Falls has many stories like John ‘Spider’ Martin’s. We don’t take the time to applaud ourselves for all the wonderful people who have contributed something, whether it's in music, education or other arts. Niagara Falls is the birthplace of so many special people that are doing great things throughout the United States,” Restaino said.

Martin’s siblings, Kenny Martin and Daisy Lewis, shared some details about what the famed musician was like as a person.

Although a longtime resident of Niagara Falls, Martin was born in Asheville, North Carolina, in 1931. His family relocated to the Falls when Martin was a young boy in search of employment.

When asked about Martin’s thoughts on the City of Niagara Falls, Lewis said, “Oh, this was always his home. We were all raised with six kids. Our mother worked at Nabisco; our father worked at (Union Carbide). He came up from six children and moved on to better things, but yeah, he loved Niagara Falls.”

Kenny Martin told reporters, “Our house was kind of a hospitality place. Everybody would come there, not only just to visit our family, but to hear the band practice.”

When asked about the significance of the new sign and the corner itself, Martin said, “He contributed to the city. He came from a housing project, which is pretty tough. And now … in history, we can say he did something here. This will last forever and show that people can come out of the housing project and go on to bigger and greater things in life.”

Restaino said the intersection renaming is only the city’s first step in honoring the jazz master. A graphic panel and pedestal is planned to be placed at, or near, the intersection, giving background information on Martin’s history, as well as his relationship with the Ontario House and Niagara Falls itself. Restaino said the city is looking to help develop a walking tour in the heritage area, with Martin’s story being a fixture of that tour.

A proclamation honoring Martin was presented during the Niagara Falls City Council meeting on July 15. It reads, in part: “John ‘Spider’ Martin Jr. passed away April 21, 2000, but his creative genius and musical styles have never been forgotten in the local jazz community, as he was inducted into the Niagara Falls Music Hall of Fame in 2018. ...

“The City of Niagara Falls does recognize that in John ‘Spider’ Martin Jr., we had an outstanding citizen and amazing musician who shared his talent in many ways. Whether it was educating students or entertaining on the big stage, he represented his hometown of Niagara Falls, New York, well.” 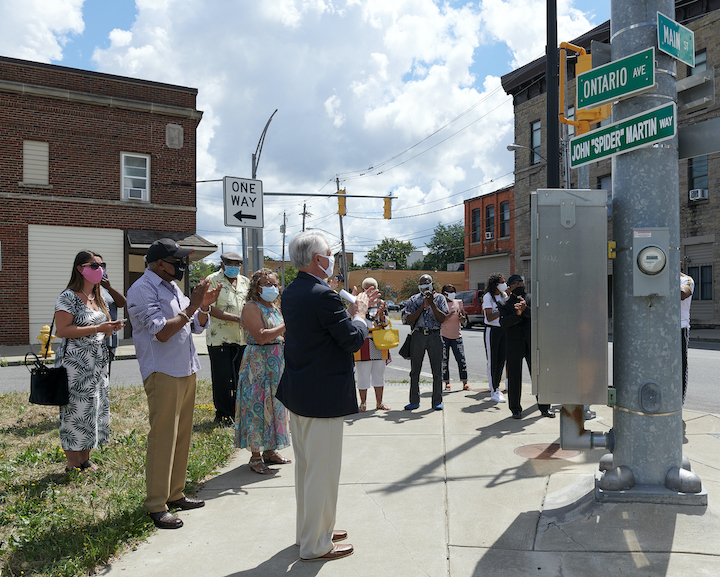