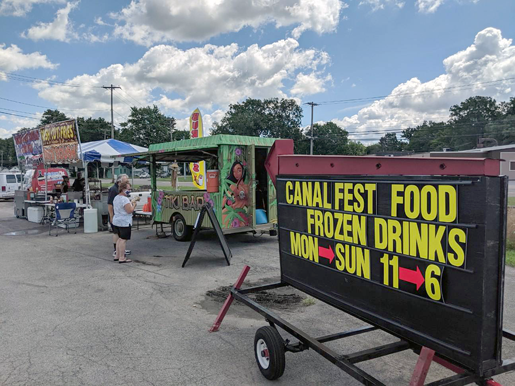 Normally around this time of year, the banks of the historic Erie Barge Canal between the cities of Tonawanda and North Tonawanda are bustling with the sights and sounds of Canal Fest – the eight-day summer festival that the Twin Cities cosponsor together every year.

Unfortunately, in April, it was announced that, due to the pandemic, Canal Fest would find itself among a long list of summer festival closures throughout Western New York.

Recently however, Niagara County Legislator Jesse Gooch decided to give locals at least a taste of what they’re missing this year.

“We wanted to do something special for residents of Niagara County who are missing outdoor events,” Gooch says. “People have just been dying for anything, especially the festival food.”

That’s why, as of July 20, fair-food vendors will be serving up everybody's festival favorites in the parking lot of Gooch’s business, Painters Plus Home Decorating, located at 800 Walck Road in North Tonawanda. Stands are open daily (weather permitting), from 11 a.m to 6 p.m. and, according to Gooch, will remain in operation until the end of summer. Masks, social distancing and other New York state-mandated guidelines are strictly enforced.

On Wednesday, Gooch posted the current festival food menu and prices to his Facebook page. The Meeting Place is offering fairground staples like fried dough, fried Oreos, fresh-cut fries, souvlaki, gyros and italian sausage, while the Tiki Bar is serving up nonalcoholic frozen drinks to help beat the summer heat. Currently, both stands are only accepting cash, but an ATM service is on hand.

For more information, including a complete menu and prices, as well as any recent announcements about the festival food offerings, visit Gooch’s Facebook page at https://www.facebook.com/jgoochproductions.

So far, it seems, the impromptu mini-fair has been quite a hit with attendees.

“We started it on Monday and we had a nice steady crowd. It didn't get the point where it was overcrowded. We maintained our capacity, but it was definitely a very steady crowd. I bet we had a few hundred people that came and went throughout the day,” Gooch says.

According to Gooch, the idea came about while talking to Jeffrey Jamieson, owner of the Meeting Place, with whom he also works closely with for the ‘Thursdays on the Water’ summer concert series – another canceled event.

“He went from doing 60-70 events a year to doing zero. So I wanted to do something to try and help him out, and do something for the community so they could participate and enjoy some of that food,” Gooch says, adding, “The feedback from the people has been amazing. People love it. It really caught a big buzz. People are extremely excited about it, much more than I thought they’d be.”

Lifting people's spirits by way of food has been a running theme for Gooch lately. He recently wrapped up his “Meals With Heart From Six Feet Apart” event, which offered low-cost dinners to local seniors. In the end, he says it’s all in a day’s work and he’s just happy people are enjoying the event.

“I've been doing community events for 15 years; it's something I really enjoy and I’m glad it's working out. So far, so good,” he says. 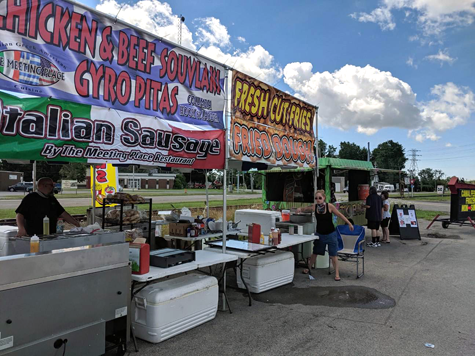