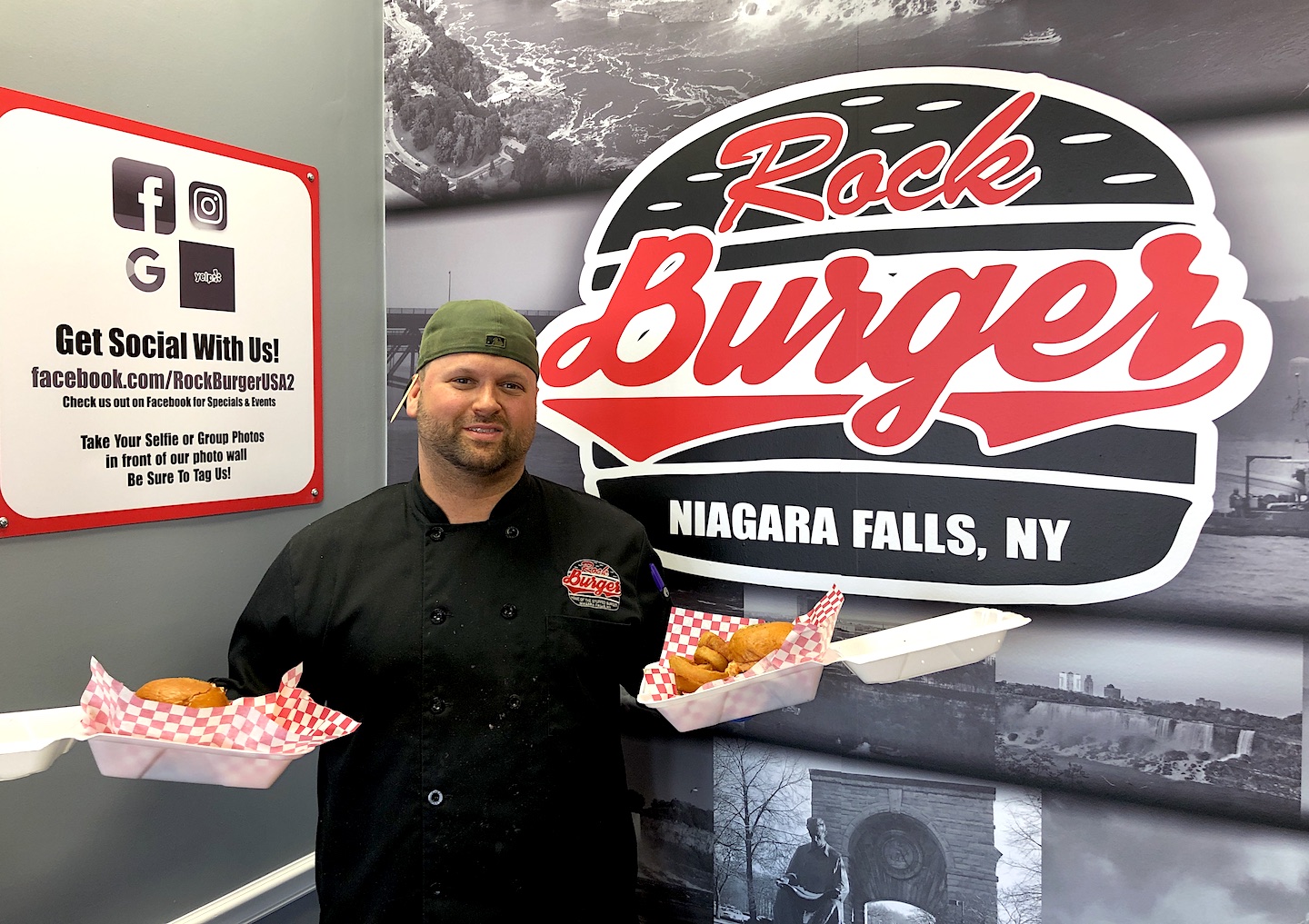 Rock Burger owner/culinary genius Jason Lizardo is shown at the grand opening of his Niagara Falls location in 2019. (File photos)

Rock Burger: 4 years of great tastes - and a delicious-looking future

Four years ago this week, Rock Burger made its debut in Niagara Falls – and waistbands throughout the area are still yet to recover.

With a unique menu specializing in stuffed burgers, the restaurant, which began as a fledgling burger joint operating out of the back of Players Sports Bar on Niagara Street, quickly became a local favorite. Now just four years later, Rock Burger is on its way to becoming one of the fastest growing chain of restaurants in Western New York. A number of new locations are expected to open by early fall.

2020 marks one year since the eatery moved its main operations from Players to its current location at 8529 Niagara Falls Blvd., Niagara Falls. That site is set to open up an outdoor patio in the next few weeks once fencing arrives. It feature specially designed picnic tables embossed with the company’s logo.

Looking back on the company’s beginning, owner Jason Lizardo says he never anticipated the success the restaurant has garnered in its short lifetime. He’s been “humbled” by the overwhelming response.

“It's not expected from anybody, but it's obviously well appreciated and humbling.”

In a post shared on Facebook, Lizardo further reflected on his company’s progress through the years: “When I started this business 4 years ago I had no idea what the future held. I gave up a well paying job to pursue a dream. I was clueless, but I had ideas. Through trial and error I came up with a product that I loved enough to share with everyone. I had to teach myself everyday and learn from mistakes made along the way.

“I can write a lot more but most of you all have came (sic) along this journey with Rock Burger since the beginning. At times I wanted to quit, give up. But it’s all worth it in the end. Sacrifice, get good people behind you, positivity can make things possible.”

Despite the sentiment, however, Lizardo isn’t shy about the lofty goals he’s set for the restaurant looking forward.

“I got something that's unique and that nobody else does. My goal is to become the first stuffed burger chain in America,” he says.

From the looks of it, Lizardo seems well on his way.

Business has been booming pretty much since the first stuffed patty hit the grill, largely through word of mouth. The company’s Facebook page is now flooded with testimonials from customers sharing their personal experiences, a few even detailing hours-long drives to make the pilgrimage to the restaurant, some for the first time, others for the umpteenth time.

For the uninitiated, Rock Burger has made a name for itself with an eye-popping array of stuffed burgers. Its regular menu alone features a seemingly endless variety of incredible creations including specialty burgers stuffed with mushrooms, mac & cheese, chicken cutlets and/or jalapeno poppers.

For those with a more daring sense of appetite, the menu also features a sweeter variety of burger: some filled with Oreo’s, peanut butter cups or even cheesecake. Don’t worry: These burgers aren’t topped with regular condiments like ketchup and mustard (unless you wanted that).

Each specialty burger is individually optimized to showcase and enhance whatever flavor it is stuffed with. The “Reese’s Extreme,” for example, is topped with a strawberry glaze while the “French Oops” – essentially a bowl of french onion soup on a bun – has french onion and mozzarella topping covering the top of the bun itself.

One of the restaurant’s biggest draws is the limited-time-only specialty burgers, which Lizardo posts to social media throughout the week. While some have returned throughout the years, many are only available that week, giving these creations a “get-it-before-it’s-gone” collector appeal.

This week saw the return of the fan-favorite “Ravioli Burger,” as well as the unveiling of “the Macho Man,” which was stuffed w/ cool ranch Doritos & cheese, and topped with (of course) Slim-Jims. 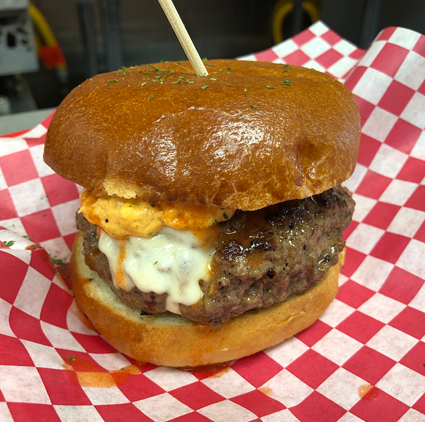 While one never knows what will be stuffed into a Rock Burger, the end result is the same: delicious burgerness.

If you’re wondering how Lizardo comes up with his inventions, you’re possibly overthinking it.

While he admits he keeps a “Burger Bible” close by to work on some ideas, most are simply created on the spot.

“Most of my ideas come from just looking at stuff and using my right brain and saying, 'Well, I bet you that would be good and this will be good.' Then I’ll make it, I’ll try it, and then I’ll sell it that morning,” Lizardo says.

Due to the seemingly endless possibilities, he says he’s constantly solicited with ideas from customers trying to come up with something that he hasn’t thought of.

“I’ve done thousands of burgers and I've yet to have somebody tell me an idea that I haven't already done or I have plans to do,” Lizardo says. “I get ideas from people every day. ‘Oh, I wish you would do this kind of burger.’ Well, we did that burger on Nov. 7 of last year. But you know, it's cool, because I always want to find that one burger that I can do that somebody told me to do and I can say, ‘hey, this was inspired from this person.’ ”

Does it all sound crazy?

Sure it does, but it works.

And Lizardo says that’s kind of the point.

He says he hopes that his restaurant’s success can help inspire people to realize their most far-out ideas.

“The goal really is to just inspire other people to try any idea they have, even if it's as crazy as putting cheesecake inside of a burger and selling it and having it actually working, “Lizardo says. “Don't think it's crazy until you try it. There's always going to be those people that say ‘Ew, I wouldn’t do that,’ but those are the same people who get that burger every single time for the last hundred times.”

The Niagara Falls location is open, and Rock Burger fans can keep their eyes peeled and their appetites ready for the following locations: