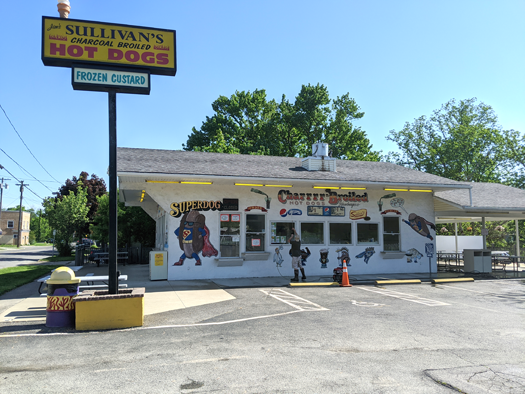 A worker sprays the outside of Sullivan's Hot Dogs in Niagara Falls as the restaurant gets set to open for outdoor eating.

The sun is out, the trees are in bloom, and the intoxicating scent of charbroiled burgers and hot dogs is making it hard for anyone stuck indoors to get any work done. It’s summertime in Western New York and, as you would expect, many of the area’s favorite seasonal eateries are opening back up for business.

But there’s been something missing this season. Due to New York state restrictions brought on by the COVID-19 pandemic meant, picnic tables and patios outside area favorites like Sullivan's Hot Dogs in Niagara Falls, Old Man River in Tonawanda, and various Ted’s Hot Dogs locations throughout Western New York had been noticeably bare – and the festive summertime atmosphere seemed somewhat tainted.

Earlier this week, the owners and managers of these stores lamented the lack of outdoor seating and said they were looking into ways to give customers some sort of viable alternative.

“We just feel bad that customers can’t stick around. They get shuttled into a line, they get their food and they leave,” said Thecly Ortolani, owner of Ted’s Hot Dogs. She mentioned the company was exploring the idea of setting up certain restaurant parking lots for a type of tailgate seating so patrons could dine in the sun.

Old Man River manager Marge Wilkins said her restaurant had moved all of its picnic tables and garbage cans across the street next to the river so people could enjoy the outdoors.

But everything changed Wednesday afternoon when Gov. Andrew Cuomo made the surprise announcement that restaurants could begin opening up patios for sit-down eating. The state released a list of guidelines for restaurant owners and customers to follow to help manage the possible spread of the coronavirus.

Tables must be spaced 6 feet apart, or have physical barriers between them; customers are not required to wear face masks when they sit down (though they are required when ordering or moving about the restaurant), and large parties (maximum of 10 people) are also permitted to sit together.

Since then, restaurants have been clamoring to get their outdoor seating arrangements in order.

Customers, it seems, were just as eager.

“We had a few people show up while we were cleaning last night looking to sit down,” said Sullivan's Hot Dogs owner Sean Honan, who was there with workers late Tuesday night getting the patio ready for Wednesday morning.

On Wednesday morning, Ortolani said Ted’s was in the process of plotting out its parking lots to allow for both the increased drive-thru/pickup traffic as well as those who choose to eat at the benches or tailgate by their car.

It’s certainly a lot of work for these businesses to manage in such a short amount of time, but for business owners like Honan, it's all worth it just to give the public some semblance of normalcy.

”This is gonna lighten the atmosphere a lot,” Honan said. “People have just been kind of stuck inside and I think it's going to be a good thing for people’s psyche to finally get out and enjoy a meal outside of the house.”

For those who might not feel safe returning to an outdoor seating arrangement, customers should know that, per the governor’s plan, daily health screenings are mandatory for all restaurant employees, and each of the restaurants listed above feature safe, streamlined take-out ordering options for all of your summertime favorites.

Sullivan’s features an outdoor takeout window, while Old Man River has set up curbside pickup for those who don’t want to enter the store. Ted’s Hot Dogs not only has order-takers outside its stores for drive-thru service, but also online ordering system via www.tedshotdogs.com.

In the end, no matter what inconvenience these eateries have had to endure, each of the managers and owners interviewed insisted the safety of customers is all that matters.