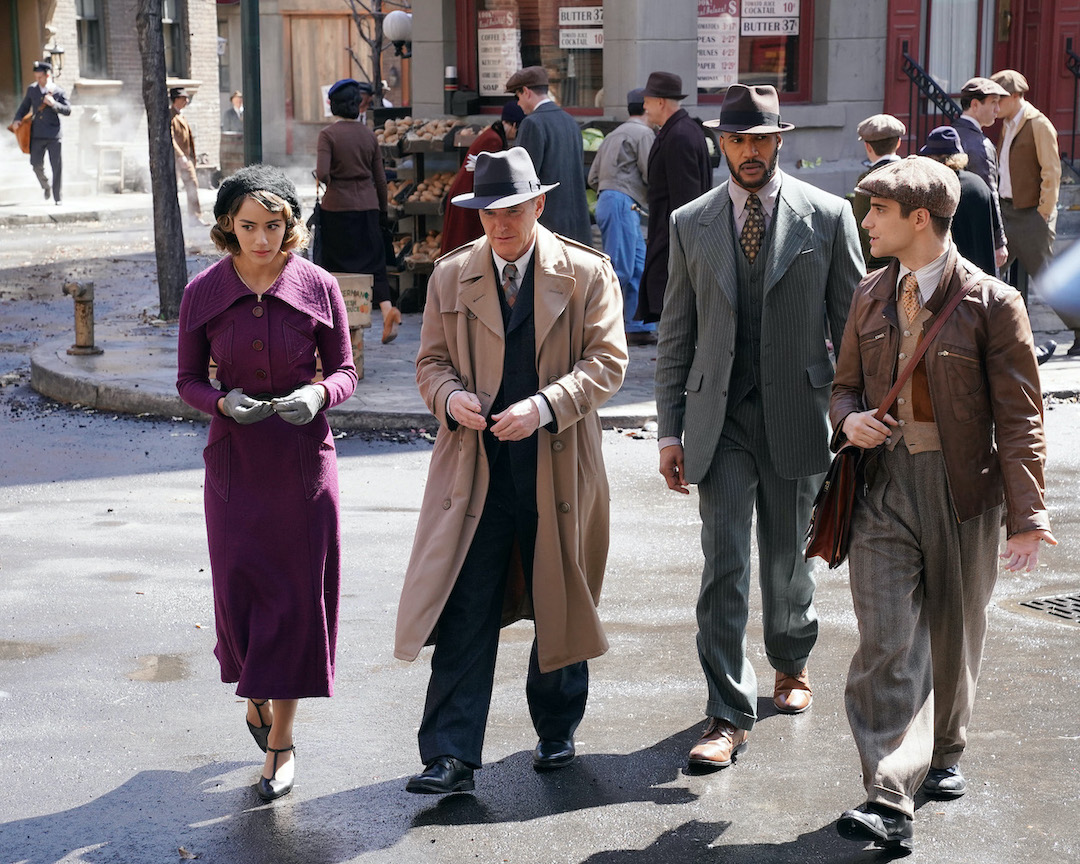 In "The New Deal," Coulson and the agents are thrust backward in time and stranded in 1931 New York City. With the all-new Zephyr set to time-jump at any moment, the team must hurry to find out exactly what happened. If they fail, it would mean disaster for the past, present and future of the world on the rip-roaring season premiere of "Marvel's Agents of S.H.I.E.L.D.," airing Wednesday, May 27 (10 p.m. EDT), on ABC. Pictured are Daisy (Chloe Bennet), Coulson (Clark Gregg), Deke (Jeff Ward) and Mack (Henry Simmons). (ABC photo by Mitch Haaseth)

Broadcast TV's super superhero saga, 'Marvel's Agents of S.H.I.E.L.D.,' goes out on its own terms

It took a few episodes for this writer to settle into ABC’s “Marvel’s Agents of S.H.I.E.L.D.” The series came on the heels of “The Avengers” – the greatest gathering of superheroes ever assembled on screen – and it had, well, none of them.

No Iron Man. No Captain America. No Thor.

Just a bunch of suits, led by Phil Coulson (Clark Gregg), whom we thought had died in the movie.

Left with no Avengers, “S.H.I.E.L.D.” had to rely on storylines and character development.

Now, in theory, that’s what makes a show rich and rewarding. But, once you’ve watched the Hulk flip Loki around like a pancake, it’s hard to not want or expect some good, old-fashioned popcorn CGI.

“S.H.I.E.L.D.” would offer some limited tie-ins to the subsequent “Avengers” films, and it did ultimately slide in the Inhumans, while turning Skye into Daisy (Chloe Bennet), and then “Quake.” Most notably, it brought in Robbie Reyes, aka Ghost Rider (Gabriel Luna), in season four.

While those things grabbed our attention, it was the human conflict – Fitz (Iain De Caestecker) and Simmons (Elizabeth Henstridge) trying to reconnect while lost in space; Melinda May (Ming-Na Wen) finding her humanity in an unexpected romance with Coulson; Mack (Henry Simmons) coming to terms with the framework, the loss of his daughter, and finding Yo-Yo (Natalia Cordova-Buckley) – that took hold of our hearts.

In the process, “S.H.I.E.L.D.” was able to combine action/adventure with sci-fi, romance, comedy, and, on occasion, a sprinkling of the big screen Marvel Cinematic Universe to become the best comic book-inspired series on broadcast or cable television.

Better than “The Flash,” “Arrow” or “Supergirl” (and their weekly “Oh, we’re never going to make it; we’re the worst!” brooding). Even better than the other Marvel shows that actually had more-famous characters – your “Cloak & Dagger” and those “Inhumans.”

The agents will begin their final mission tonight on ABC (10 p.m., WKBW-Channel 7). This is the final season of “S.H.I.E.L.D.,” and it's bound to delight fans who’ve stuck by it for six seasons and counting.

Simmons, whose Alphonso “Mack” Mackenzie has grown from a reluctant agent to a worthy director, spoke with BTS ahead of the season seven premiere. The actor explained Mack’s appeal – he is the team’s shield (no pun intended), protecting its members from crossing that proverbial line or becoming a villain. Mack doesn’t have superpowers, but, man, can he throw a punch when necessary – or wield a shotgun-axe. 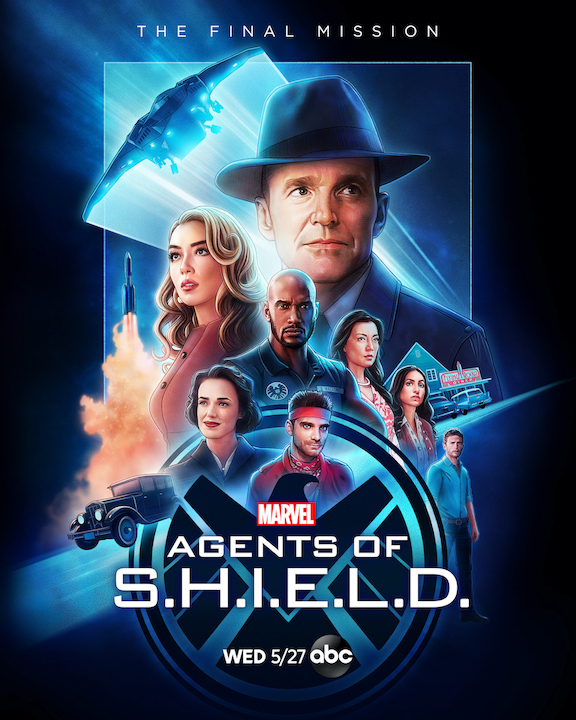 Q: So, Henry I've talked to several of your cast members over the years, and it occurred to me that there's one big question that I haven't asked them that I need to get your insight on. When this show started, Marvel had introduced us to the Avengers, and then they gave us a show that had none of them. And you look at the DC properties, they have Green Arrow, The Flash and Supergirl – even some of the other Marvel shows have had Cloak & Dagger and the Inhumans. Your series has the Agents of S.H.I.E.L.D. and not the famous superheroes of Marvel. And yet, as far as I'm concerned, it is far and away the best of all these shows. So, the question is, how did that happen?

Henry Simmons: Here’s the thing: When I look at superheroes, you're looking at – you’re watching them do something that is supernatural, obviously. Their abilities are supernatural. So, you're watching them accomplish something. And so, in a way, you're kind of removed, because you're a spectator. Whereas, I think, with our show, we're normal people – in abnormal circumstances. We’re just regular people in these circumstances that are otherworldly.

I think it's a little different there, because it actually engages the audience more, because they see themselves in each of our characters.

Q: To that end, your character is not only the most human, in terms of emotions and empathy, but the human we most want to be like, I would say. Are you happy that you were afforded the chance to play this character, this way, or would you, maybe, have preferred portraying someone with superpowers?

Henry Simmons: Let me say this; I’ll be honest with you: When they started handing out superpowers like they were candy – just like pieces of candy – they were like, “OK, now you can have a superpower; you can have (one).” I was like, “Oh, wow, man, I would love to have a superpower!” But, quite honestly, looking back on it – and I realized this probably in season four with the framework … I'm so happy I don't have superpowers. I'm so happy that my character didn't have that; because my character’s just a normal guy, and in these incredible circumstances.

And we don't know whether he's gonna win or lose – and there were times I lost. I would lose, because I'm just a normal guy. I didn't walk into a situation cracking my knuckles and, you know, cracking my neck, being like, “Oh, this is gonna be fun.” And you know right then that this person is going to beat the heck out of all these people. No, I walk into a situation, and it's like, “Oh, man, is Mack gonna get his butt kicked in here, in this situation; is he gonna die?”

You didn't know, and that's what I loved about it, because it was a just a regular man trying to overcome almost insurmountable circumstances. And then also becoming director. I could not rely on any powers to get the job done. I was still a normal man that had to figure out how I would use the team in the best way to put out this fire; to solve this problem.

And I'm so happy they didn’t give me powers; I thank them for not giving me powers. 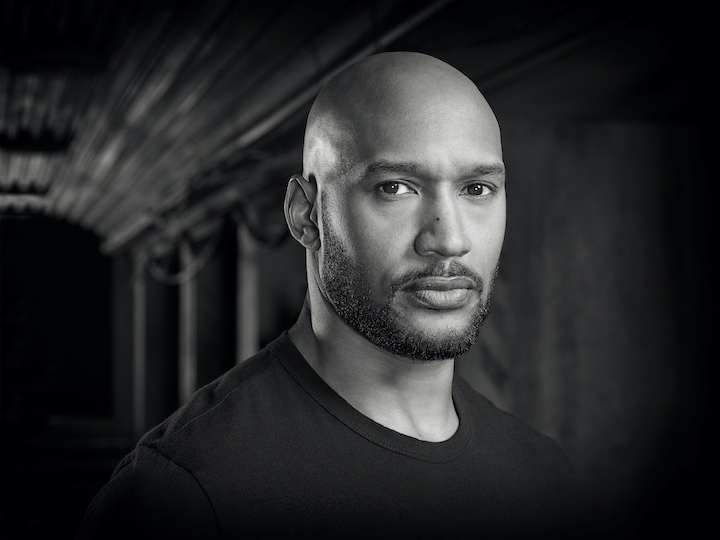 Q: You know, you're part of the MCU; you're part of what is probably the biggest thing in entertainment and pop culture in the past 20 years. It's surpassed “Harry Potter”; it's suppressed “Star Wars.” I'm sure that that in and of itself is a lot to wrap your brain around. But when you interact with fans, is that the thing that resonates the most with them is, like you said, the fact that you are human; you didn't have those powers; that you had the everyman's struggle?

The second thing probably is because I'm a normal human being. I'm a regular guy. I don't have powers and, again, it's something that they can relate to. They can relate to me maybe a little bit more than somebody that has the power to, you know, wipe out a whole town with one wave of their hand or something like that.

Henry Simmons: Immensely proud – and also a bit surprised. I think most of us thought that season six was going to be the end. And I mean it, really, honestly, everything after season three, I’m like, “OK, this is it! This is it (laughs).”

So, we got the call that we were going to do a season seven, and it was going to be the final season; and, yeah, there was a satisfaction, I guess, was the first thing that I felt. Because you knew it was the end, and it was the end on our terms. It wasn't like we were cut short. We had the opportunity to tie up stories, and to have these characters have their stories tied up in some way. And for the writers to end the show the way they want to end it, instead of it being so abrupt. So, in that sense, it's very satisfying. It's very satisfying. And I just hope that it satisfies the audience, as well.