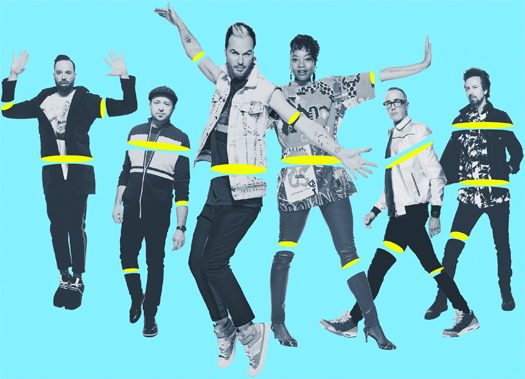 Fitz and the Tantrums (Image courtesy of Donovan Public Relations)

Q&A: Fitz and the Tantrums bringing 'All the Feels' to the Falls

Albums are often filled with hyperbole – like “It’s raining men,” “Baby, you’re a firework,” or “Your body is like a backroad.”

… I’m still not quite sure how that last one works.

But when Fitz & the Tantrums set out to create “All the Feels” … they actually imagined fans would experience “all the feels.”

On their 2019 release, the six-piece crafted a dozen-plus songs that explore doubt and the struggle to succeed; the give and take of love – of pushing someone away while also desperately trying to keep them close; and the soaring highs that come with performing in front of thousands of adoring fans.

And, as this is Fitz and the Tantrums we’re talking about, these lyrics are placed within music that will bring you to your feet and have you moving around.

One moment you’ll be pondering life; in the next minute, you’ll be wildly flailing those arms and hopping around with your friends.

Fitz and the Tantrums’ songs will make you feel, well, “All the Feels.”

The band will bring its new material – and a bevy of songs you’ve heard in TV, film and commercials – to Niagara Falls, Ontario, as part of a headlining gig this Saturday at Fallsview.

NFP caught up with Fitz in between concert dates. An edited Q&A follows.

Q: How's it been going on the road so far?

Fitz: Oh, it's great. It's been a lot of fun. For us, it’s where we live; where we flourish; where we cut our teeth and built our name as a band. And you know, for us, every time we write a new record, you just kind of make it in a bubble; and you put it out to the world; and you can't tell really what's going on with it. And then you get to the shows, now, and you play in front of people every night. Seeing their reaction to the music, and they’re singing every word, it's just honestly the most exciting part of the whole sort of journey.

Q: And that's what I'm curious about. In the Buffalo market – despite the fact we've got a wonderful reputation for all of our snow – we really get a lot of great tours. But I find the dynamic of audiences is interesting these days. A lot of people come to shows and they're on their phones, or they're sort of distracted. Looking at the reaction for your shows, it really looks like the crowd is into it – that they're excited; that they're giving you guys a lot of love every night. What do you think the key is to that – and what are you guys doing that other bands are not doing to get that kind of reaction?

Fitz: We have always put on an incredibly intense, high-energy show. Anybody that’s seen us play before, they know that you're not just going to come and stand like a wallflower. I literally sometimes joke with the audience – I'm like, “You're not allowed to be a wallflower, texting on your phones.”

It's about being in the moment with us. And, you know, we do a lot of crowd participation. We’ve always, for 10 years now, tried to make the audience the seventh member of the band, because we found the more energy we give and get the crowd into it, the more they get into it, the more we get into it, and it becomes this, like, infinity loop of energy that just becomes almost like a pressure cooker.

And it's funny, you know, different cities have different kind of body temperatures, almost, or vibes. In some cities, they're like ready to party and go crazy with us from the first second. Some cities are a little more reserved. But, usually, like a couple of songs in, they see like, “Oh, I can loosen up.”

We just really want people to have fun and, if we could give people an hour-and-a-half escape from their worries from their long day, have some fun with us and bring a little bit of joy, then that’s the most we could hope for or ask for, really.

Q: I know Wikipedia is not always gospel truth, but something I saw on Wikipedia that I thought was interesting is you guys have a Buffalo concert specifically mentioned as an on-the-road achievement. I know you play a lot of different places. Is there something about the Buffalo/Niagara Falls market that stands out to you? What are you anticipating or looking forward to when you come back this way?

Fitz: I mean, that’s the thing is that we have always played (smaller markets). We’re not a band that just plays the 20 big cities across America. Last night we were in Greensboro, North Carolina. The night before, we were in Columbia, South Carolina.

We have just found that – to me – the smaller the town, the more away from a big city, the more vibe, the more energy. And especially like Buffalo, I mean, we've done so many riverfront concerts there. We just have, now 10 years in, we have such a long relationship, especially with the Buffalo/Niagara area, you know, that it's like we really put in the time. And that's what's cool, is you come to a city once, the first time you play, there might be a couple of hundred people. Then next time more and more. And you really build this relationship with the city.

And for us, Buffalo, since the very beginning, has always been a huge supporter of us. You know, we’ve had great shows up at Niagara. It's always been this place that has welcomed us, and we keep coming back to it. The city and the region just has vibe and an energy. … (People) just come to have fun and bring it.

Q: I want to talk to you about “All the Feels.” It’s a high-quality piece of music – and congratulations on that. A couple of interesting themes on this album: I find a lot of times people make assumptions that bands or musicians that have had success that, you know, everything is sort of a cakewalk, and everything comes easy and there's no challenges. A big theme on this album is the idea of striving to be successful versus doubt, or I guess fear, or the things that would hold you back. There's also the idea of love versus loss of love.

You're tackling some pretty serious topics on this album. What was the mindset going into this record?

Fitz: I think it’s a fallacy. From the outside, you can look at somebody who’s living their dream and there’s almost more of a pressure – like, “Well, you’re getting to do exactly what you want to do in life; you should be happy.” But we're all still human beings, and you have your ups and downs.

Our life is always in flux, always in movement. We are the transient element. There's no grounding nature; it's very isolating; you're away from your friends and your family. I have kids now; you’re away from them. It can be just a very weird thing where you're in an empty parking lot behind the stage of some venue that's in the middle of nowhere, on the outskirts of town, feeling very lonely and isolated, and then, all of a sudden, two hours later, you're playing in front of a couple thousand people going crazy.

So then it's like really high-high, and then an hour after that you're walking through 1,000 red Solo cups on the floor of an empty venue; and then, all of a sudden, it's like empty again. It’s a very crazy thing.

And I think, in terms of the album and stuff, you have to write about what's going on in your life, and try and include some sort of truth of your experience; because, ultimately, I think that's what's going to resonate with people, and people are going to relate to.

And for me, you know, I'm a human being; like anybody else, I've had my ups and downs. I have struggled with depression, with anxiety, with stress. And at the same time, you know, want to speak to that stuff, but also speak to the ability to overcome it.

A lot of the songs, the verses are talking about the dark side of things, and then a lot of the choruses are almost the anecdote. I would say sometimes even the pep talks that I try and give myself to overcome that adversity.

And so, for me, that's just where you have to speak and be truthful about, if you want to write something that feels halfway authentic.

Two nights ago – we also do a meet-and-greet with concertgoers every night. You make music and you forget the importance that music can have. And this woman came up to me, and she just said, “You know, I just have to tell you how much you guys' music has meant to me. It's just gotten me through a divorce and a serious bout of depression.”

And her sincerity in that moment, it wasn't disposable; it wasn't bull$hit. It was like, you could really feel the weight of what that meant to her, because obviously these feelings and this journey that she was going through was very raw and still very fresh.

And then we're playing the concert, and she's in the front row; and we have a song on the new record called “I Need Help.” And we start performing that song, and I looked down at her, and she's crying – with tears of joy, relating.

And, look – I don't claim that we make the most profound music of all time, or that what we do is that important – but in that moment, had to realize that, when you make something, you put it out in the world, it has meaning. And people take it into their lives, and it can be something to them. And to see that power is like a real reminder that what you do can have an impact on people.

I think we were all in the band so touched by her comments before the show, and then to see her there, it was a powerful moment that really reminded me of – it just helps to make up for the sacrifice of being away from our family, and always being in transition.

It’s physically and mentally very demanding to be on the road as much as we are. But those moments, you know, it just helps. And you're like, “OK, well, this is why we do what we do.”

And for some people, there's not that weight. Some people, they come, they just want to have some joy and some fun. And I also feel like, in this world right now, it feels like so divided and dark and tense, that it’s also wanting to put out some truth, but also some positive messages, as well.

Fitz and the Tantrums bring “All the Feels Winter Tour 2020” to the Fallsview Casino Resort Avalon Theatre at 9 p.m. Saturday, Feb. 22. Click here for more information or to purchase tickets.