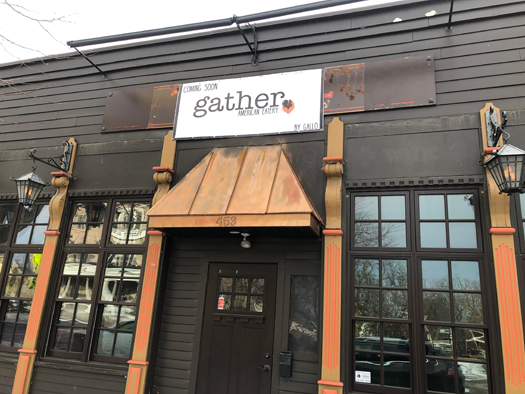 “With this location, the owner of the property (Al Muto) had asked us a while ago to see if we wanted to put a concept in here,” Hibbard said. “And it kind of went on the back burner for a while,” because he acquired a second property at the corner of Center and North Fourth streets. “He came to us and said, ‘Hey, you’ve got to help me figure something out for here.’

“We sat down and talked and said this is what we think can work. And he said, ‘Well, you guys can do it then, right?’ (Laughs) So, I guess that’s the point we’re at right now.

Hibbard’s pastas and wood-fired pizza – not to mention price point and wrought metal décor – made Gallo an overwhelming success when it opened in 2016. Its popularity resembled Krispy Kreme, or what Cheektowaga has with Chick-fil-A. The eatery had a steady stream of hungry customers, and continues to do very well.

He pitched a similar concept – this time with a courtyard and grab-and-go options – for the main building at Fourth and Center. The Village of Lewiston Board of Trustees approved Hibbard’s proposal in August.

This new location will be the third full-fledged Gallo restaurant.

“What we’re doing with the Gallo concept is, the existing Gallo, that’s gonna turn into a Mexican restaurant,” Hibbard said. “This is going to be more like steaks and burgers.” The second location, abutting Sgt. Peppers Hot Sauces and Brewed and Bottled, will be “the Gallo with the pizza and pasta.”

Hibbard said the plan is to have all three locations open – ideally by summer – before the original site transitions into a Mexican restaurant. 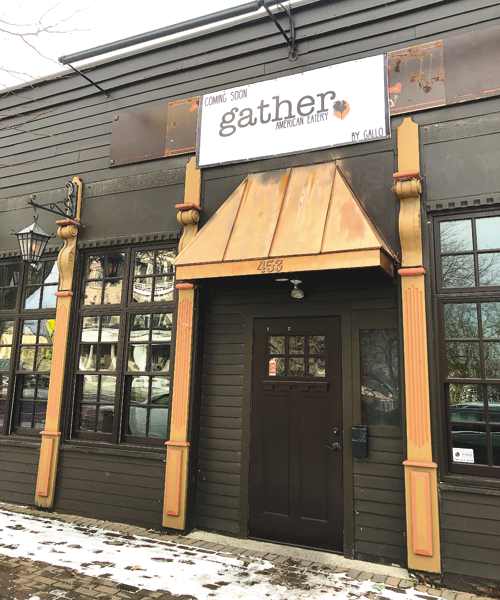 A new sign above the door at 453 Center shows the restaurant name (Gather) and Gallo logo.

When people learned Hibbard was involved, he received “A lot of positive feedback, just because I feel like this concept in Lewiston, it’s something that a lot of people loved,” Hibbard said. “It’s a beautiful bar here. I think that little-bit-older demographic, my age, mid- to late-30s, all the way up till 60s, 70s, they love to be in here at this bar. So, that’s really kind of what we’re going to be focusing on with this location. And they love the atmosphere in here.”

Brickyard owners Ken Bryan and Eric Matthews operated Center Cut. They decided to focus on the Brickyard Pub & BBQ and the Brickyard Brewing Company, and let go of both the steakhouse and Tin Pan Alley.

Hibbard said, “They did a beautiful job in here. They really did.”

In an interview with The Sentinel earlier this year, Matthews said, “I don’t think the village was looking for 50-dollar-a-head, steak-price-type-things.”

Hibbard explained, “I have four kids. So, when we go out to dinner, we don’t go to a place that is on that higher level with the kids. That’s something that my wife and I just go to. This, I want it to be where my wife and I can come in, have a great meal, and my kids can order something, and not have to walk out of here spending $200.

“I think it’ll be pretty much for everybody. You could come out, you can have a sandwich or a burger for $13, $14; or you wanted to get a steak for $30 – but your steaks are going to come with your potato and salad.”

Moreover, the restaurant’s name signifies “Being able to gather at a place in this community, whether with your kids, with your family, with your friends. It’s really a gathering place that they can come in and feel comfortable, and almost feel like home,” Hibbard said. “We have a fireplace in the back.

“I think that’s really one of the reasons why I came up with that name, was just the sense of community that I feel like we’ve achieved, even at Gallo, as well.”

Hibbard has given thought to how his Center Street operations will complement – not compete with – one another.

“Here versus the Mexican restaurant, versus Gallo, they’re different atmospheres. And the style of food is going to be different across all three. So, we feel that it’ll give somebody, a family, every week they could really stop at every location and have something totally different, with a different atmosphere, different vibe, and a different menu. We feel like that’s something that we have to really work towards, and really ingrain that into people’s mind in this community.”

He expects to have 20-25 employees at Gather.

“We estimate, with all three locations, we’ll have 75 to 100 employees – mostly part-time, but a lot of full-time people that really we’re going to need here,” Hibbard said.

Mayor Anne Welch said, “I’m very excited that Michael Hibbard is opening another restaurant in his hometown in the Village of Lewiston,” and “offering more delicious American cuisine.”

“Mike has proven to be a very successful restaurateur, and his restaurants are an asset to the community,” she added. “His good business sense along with his love of good food will definitely serve him well.

“I have personally known Mike all his life, and know him to be a very intelligent, talented and energetic young man. He is also very involved in the community. I am so pleased that he has chosen Lewiston to open his restaurants.

“I have no doubt that his new restaurant, Gather, will be a terrific success.”