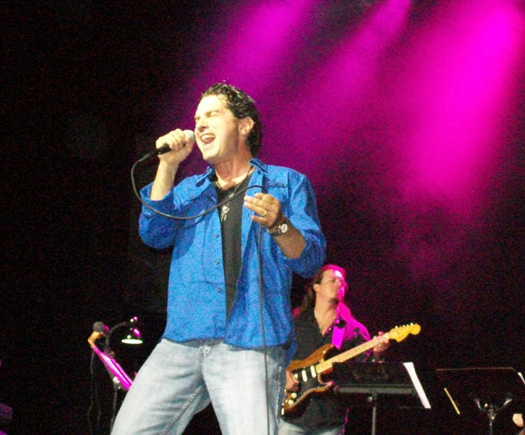 T.J. Insana is shown performing at a past concert for the Theresa Insana Scholarship.

If you’re going to stage “Jesus Christ Superstar” – as it’s celebrating a 50th anniversary, no less – then you better bring out the big guns.

Assembling performers who have staged the iconic Andrew Lloyd Webber musical over the past five decades is a good start.

That’s what Niagara Falls High School teachers will do next week with their retelling of the greatest story of all time.

“It’s our second annual alumni performance that we’ve done,” Tom Vitello said. “My coworker, Dennis Wilson, and I started this alumni production company. It’s the Niagara Proscenium Alumni Players. We started it last year, and here we are in our second year.

“And it really started as just kind of an off-the-cuff kind of an idea. A bunch of friends and I were together at Wine on Third a couple years ago, right before the ‘Jesus Christ Superstar Live’ screening on NBC. And, you know, we’re talking about the show. And we said, ‘Wow, it would be really cool to do an alumni production. And this would be a great show.’

“As we’re looking around the table, it’s like, ‘Oh my god, we have the cast right here!’ Well, of course, those people are not in the show, with the exception of T.J. (Insana) and Dennis!”

As the friends reminisced, “We kept brainstorming, and we decided to start this theater company,” Vitello said. “Under the guise of Niagara Proscenium Players, which is our student theater company at Niagara Falls High School. We decided to add this third show each year. And so, last year, when we were doing this, (we thought), ‘You know what? “Superstar” is a little bit too big for our first go at it.’ So, we did a cabaret-style show: ‘Smokey Joe’s Cafe.’

“It was received tremendously by the audiences. Everybody just really loved what we did. The people in the cast were excited that they got to be back on stage. People in the audience said, ‘Oh my god, I would love to be a part of something in the future.’

“In looking at what we were going to do this year, we were like, ‘OK, this is the year. This is where we have to do “Superstar.” ’ So, here we are (laughs).

“It’s a huge undertaking; because it’s a full-blown production. It started off being just a concert version, but, as we started putting our heads together, the production team, we were like, ‘No, we need to do this; we need to do it pretty much full-on.’

“It has a little concert feel to it, but everything else – in terms of the songs and the cast – it’s all full staged in front of the band and our student chorus.”

The cast of 20-plus is comprised of alumni from Niagara Falls, Niagara Catholic and LaSalle high schools.

“I think our oldest class member was from the Class of 1970. Our most recent is Class of 2019. We’ve got quite a spread of graduating classes represented here,” Vitello said.

“In addition to the alumni, we also have current and retired faculty and staff members in the production, as well,” Vitello said.

Insana, a noted singer and pianist, Berklee College of Music graduate and occasional Western New York headliner (Insana lives out of state), will play Jesus – as he did at NFHS.

“T.J. lives in New Jersey with his wife and two children. He’s graciously coming back to do this,” Vitello said. “This was his senior musical in high school in 1989. So, he knows the book really well; and he’s been rehearsing on his own, because he is a musician in his own right.

“He actually came in this past Saturday to do a run-through with the cast. He was here for less than 24 hours. He literally drove in, did a rehearsal, stayed the night at his parents’ house, and then drove right back to Jersey. …

“He’s phenomenal. He’s so talented. We’re so blessed to have him as a part of the production.” 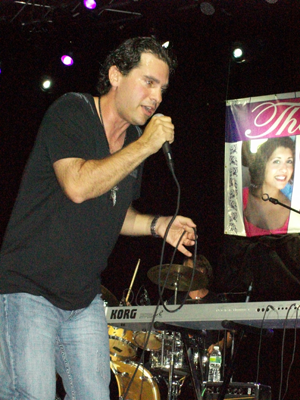 “Dennis was talking about starting that alumni thing, where they’d get people to come back and do shows,” Insana recalled. “They’re like, ‘If we do “Superstar,” would you come back and do it?’ And I was like – thinking they would never do it – I was like, ‘Yeah; sure; I’ll come back.’ And they’re doing it (laughs).”

“I think it’s good, because they’re raising money for the drama program at the high school, which is great – you know, keeping the arts in schools is important to me,” Insana said. “And they’re also donating to the Theresa Insana Memorial Scholarship fund this year, which we’ve been a part of for the last 15. So, I thought it was a good opportunity for me to do this, and help out some people. And then at the same time, it’s probably going to be a pretty good time.”

In 2004, Theresa Insana, T.J.’s cousin, was murdered while living in Las Vegas. Her case remains unsolved, and was featured in an episode of NBC’s “Dateline.”

The Insana family created a scholarship to honor Theresa’s memory.

“For each of our shows that we do, whether it’s the two student shows or this alumni production, we try to give back to the community; whether it’s like, in this case, the Theresa Insana Scholarship, or, last year, for our spring musical, we did Broadway Cares/Equity Fights AIDS,” Vitello said. “We’re looking at some other local kinds of things for our upcoming productions that we can give back to the community.

“It’s one of our goals, for Dennis and I, is to make sure that our kids understand the importance of not only what they do on stage and learning about theater, but to give back to the community; to teach them the importance of philanthropic work.

Vitello noted, “It’s just a great opportunity to give back to (the Insana fund), because their scholarships ultimately go to two females from Niagara Falls High School each year. So, it’s going right back into the school.”

Insana has scored tracks for major motion pictures and has shared the stage with Western New York’s top musicians.

Still, he joked his performance of Jesus 30 years ago bothers him to this day.

“You know, it was kind of a departure for me, because I had never done theater,” Insana said. “Just before that, I was just basically singing in a band, which has its theatrical aspects. But, you know, when you’re dealing with character and that kind of stuff, it was a challenge.

“I was a kid, so I’m sure I didn’t meet the challenges great. I have an opportunity here to maybe do a better job with it.”

Insana said he expects this will be a fun production, but also one that is professionally crafted.

“I think most of the people that are doing the show have done theater in the past. And this is a show that everybody’s familiar with, so it’s not a ton of work for people,” he said. “I know they’re getting together two or three times a week at the high school with the locals. I’ve only been to one rehearsal, and they all seem to be, you know, everybody is in good spirits, and there’s no egos on the table. Everybody’s just having a good time.

“Dennis is very good at directing and not being overbearing. It’s light-hearted. And, you know, everybody’s putting forth the effort. Everyone sounds good. There’s some really talented people in it. We have the experience behind us, so it’s not too much trouble for anyone.”

“There are a lot of really talented people in the area,” he said. “You go out to any of these shows, and these guys are top-level players. In the show, Jamie (Holka’s) playing guitar. You got Rob Thurman playing the drums. Jim Wynne’s playing the bass. There’s a lot of talent. I love playing with these guys – and hopefully they like playing with me. It’s a good situation all around. I’ve never had a problem. You know, I’ll put together a show from 400 miles away, and these guys pick it up like nothing.”

“Jesus Christ Superstar” will be performed at 7 p.m. Oct. 23-25 at the Niagara Falls High School Performing Arts Center, 4455 Porter Road. Tickets are available at the door, starting at 6 p.m.