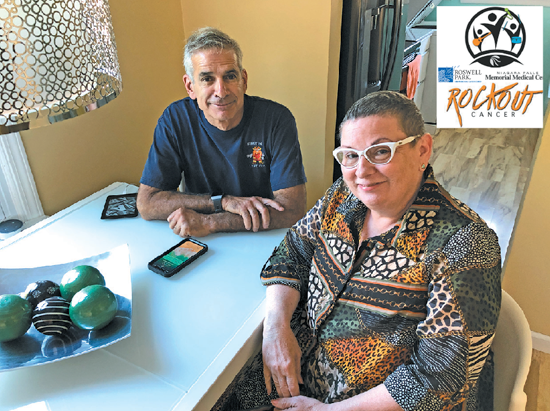 When Greta Kargatis was diagnosed with breast cancer in January, she had “Tons of doctors’ appointments, tests – you name it,” she said. “Seen different doctors trying to figure out who I’m going to go have the surgery with. Stuff like that, you know? And then, I think I’ve had three or four CAT scans. You know, a lot of medical that I did not plan on having.”

The last thing she needed to deal with was a utility bill.

Of course, her medical condition didn’t stop collectors from calling.

The Lewiston-based group “really helped me immensely,” she said. Greta was provided with Tops gift cards “to help me with my grocery expenses, and then some money also to help with my monthly bills. …

“It’s like you can get bombarded with all these bills. … The tests that I had run for those two months, every month, I was shelling out an extra thousand dollars.”

Lower Niagara Community Survivors President Emery Simon said, “We gave her Tops cards, so we gave her money for food. We took one month of her bills – all her bills, every one of her bills – and we literally reimbursed her for those bills. That literally took the next month where she didn’t have to write a check for anything that was non-medical.”

“That’s what we’re trying to do with what we did was by paying one month of her bills, it took that monkey off of her back.”

“Like I said, there’s just so many other added expenses,” Greta said. “Plus, not only that, I was working part-time. I couldn’t work anymore. I mean, some people, God bless them, I don’t know how they go through chemo and all that and go to work. There are a lot of different types of chemo and that, too. But there’s no way I could have went to work.”

Of the benefits she received, Greta noted, “It was fabulous. I was, like, shocked when they contacted me about it. I was overwhelmed. It was great. ... I think it’s a wonderful program.”

Greta explained, “Cancer is stressful and you just got to kind of get your brain in the right area – what to think about, how to handle it. Because you can’t dwell on it; ‘Oh, my God, I might die?’ We can all die tomorrow. But you can’t think like that. You’ve got to get a positive attitude.

“And not worrying about a little bill here and there – it’s a lifesaver to have something like that. It is. You don’t want to have to worry. You’re worried enough about going to your doctor’s appointment and seeing what they’re going to call and tell you what happened. … You know, it’s so much more of a help when you don’t have to worry about the financial end of it, either.” 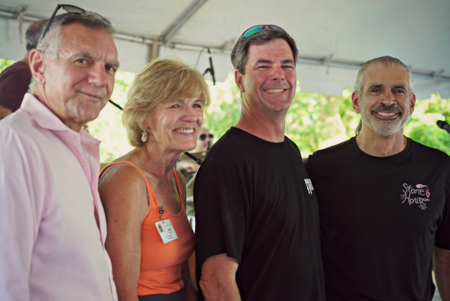 Helping Those In Need

“In my family, there’s a history of cancer throughout it,” Simon said. “I’m fortunate, and my family’s fortunate, that we didn’t need the help, that we had enough internal help, financially and physically, to help everybody. Just like she said, taking somebody to the doctor and such. What it did was get me to think more and more about the people that are less fortunate, that don’t have the resources to help themselves.

“The more you talk to people that are going through cancer, they tell you the same things. ‘I’m overwhelmed. I’ve had to change my life. I can’t work. I can’t do the things that I like to do before.’ You get some people, they love to mow the lawn. Now you take away mowing the lawn, it’s a huge thing to them. I can’t drive the car. You know, your car is your independence. Imagine somebody telling you. … ‘I want you to take the next month-and-a-half off of driving a car.’ And not because you did something wrong, because you physically shouldn’t be driving a car.

Initially, the goal was to provide services to those fighting cancer: mowing lawns, removing snow from driveways, arranging or providing rides.

“We’re still offering the same things. We’re just not doing the service ourselves. So, we’re reimbursing you for that service,” Simon said. “We want to grow to a point where we actually have people that want to volunteer to do that. But, unfortunately, in today’s day and age, the liability is a huge issue. And in order to deal with the liability, we have our basic insurance policy right now in place. And hopefully, as the organization grows, we’ll be able to grow with it, insurance-wise.” 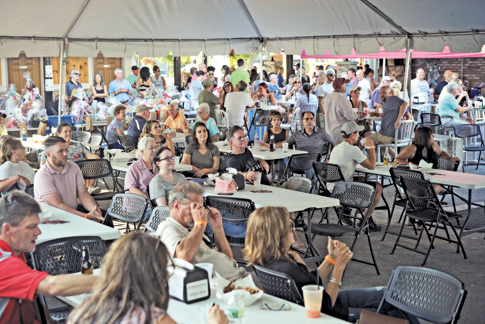 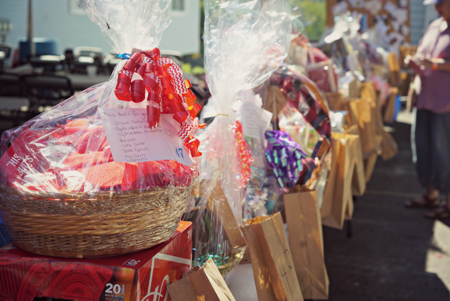 The Lower Niagara Community Survivors group sought to seed its good-deed-doing through “Rockout Cancer.” The debut event in 2018 featured a full day of food, live music and games.

A sequel has been set for Sunday, Sept. 15. The second annual “Rockout Cancer” will run from noon until 8 p.m. at the Lewiston Stone House, 755 Center St.

“Last year we had Casa Antica and Gallo, and Brickyard was the main food sponsor. This year, we’ve got the same three, and now we’ve got Aimee from Just Desserts, is going to do desserts,” Simon said. “One hundred percent of that is donated. So, there’s zero cost in that. That’s how we were able to achieve getting $22,000 last year; we didn’t pay for food. We didn’t pay for anything.”

Simon said attendees at last year’s event raved about “how much fun they had.”

This time around, the “Rockout” will start with a Saturday night pre-party. The Summer of ’69 will take the Stone House stage at 7 p.m.

“Everybody loves The Summer of ’69 band; they’re just a great band; they’re a great group of guys. And their contribution to this is to try and get people through the door.

“Memorial, last year, was our key sponsor. And being a medical facility, it was a big jump for them … to do something like this … and put their name on it. And I like to think that they did it because, A) our cause, and it’s the right thing to do,” Simon said. “Now, this year, we’ve grown, and we’ve got Memorial, and now we’ve got Roswell.

“I think it’s important for people to know that, when they come here, there will be people here should they have questions. You know, a lot of times people don’t want to go (to the doctor). They feel ill at ease going to a doctor, going to a hospital. In a friendly environment like this, it’s easy to strike up a conversation and, you know, ‘I’m experiencing this,’ or ‘My mother is having this problem; my dad’s having that problem.’ They could talk to somebody, maybe make them feel at ease, to a point where they will go get checked.

“The two main focuses that we want to do here is that we want to raise money to help people. But we also want to create awareness, the awareness that, when you reach 50, you should start going and getting colonoscopies. When you’re a woman, you should be getting breast exams; you should be checking yourself. Unfortunately, our area is very high in cancer. A lot of people think, ‘If I don’t feel bad, why should I go get checked?’

“Our big thing is, we want to instill people to, ‘Hey, I just read this story about somebody who went through it,’ or ‘I know this person.’ ‘You know what? Maybe I should go get this physical; maybe I should go get checked.’ And I think that that’s huge. So, if we can help people financially, and we can get people to go to the doctor, I think that that’s two big pluses.”

In a press release, Memorial President and CEO Joseph A. Ruffolo said, “It was an honor for Memorial to sponsor the inaugural event last year, and we are pleased to share the headliner sponsorship this year with our partners, Roswell Park Comprehensive Cancer Center. Through the new Roswell Park Comprehensive Care Network, the world-renowned services of Roswell Park – the region’s only comprehensive cancer center – are now available to Niagara County residents through the Thoracic Center and Lung Cancer Screening Clinic located on our Tenth Street medical campus in Niagara Falls. And we have more collaboration planned for early 2020.”

Candace S. Johnson, Ph.D., president and CEO of Roswell Park, said, “ ‘Rockout Cancer’ is a great way for us to reinforce our commitment to making sure those living in and around the Niagara Frontier can access outstanding cancer care close to home. The event will be a great complement to our clinical program, as every dollar raised will support the everyday needs of cancer patients from the Niagara community.”

For more information, or to apply for assistance from the Lower Niagara Community Survivors group, visit http://communitysurvivors.org/. 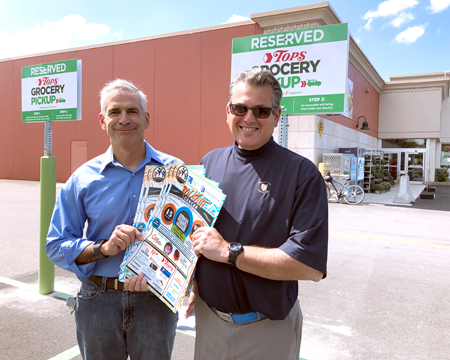 Emery Simon expressed gratitude to those who helped the Lower Niagara Community Survivors Group get off the ground, and thanked this year’s “Rockout Cancer” sponsors.

Simon explained, “We’ve gotten a considerable amount of food cards through DiMino’s Tops. And those food cards. … That was huge. … Anthony DiMino of Tops, I think that was a huge donation for him to help us with the food cards.”

He added, “I’d like to also point out, we have people, like Sterling Glass, who gave a substantial donation just out of the blue. There’s people out there, that have been touched by cancer, that just wanted to do it. They weren’t doing it for the recognition; they’re doing it just because someone’s been touched by it.”

Simon recognized his name sponsors in the feature article above. 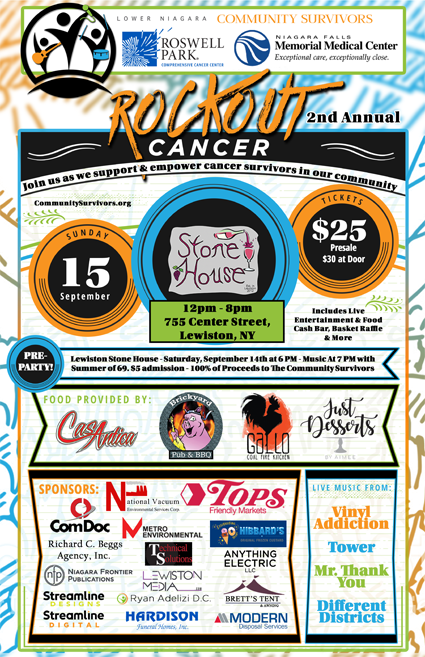