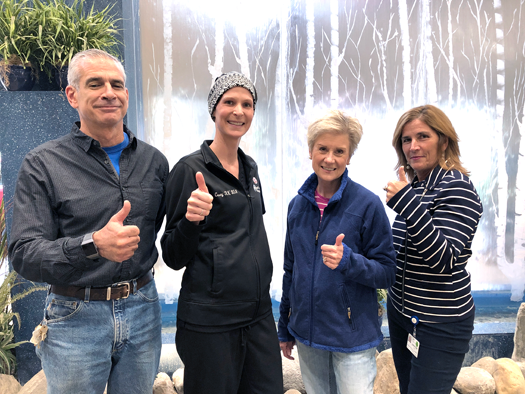 Though Casey LaFlair is from Pittsburgh and has no family ties to this area, she volunteered at the first “Rockout Cancer” event in 2018. LaFlair worked alongside the Lower Niagara Community Survivors group in raising funds for others – for people she didn’t know and had never met, who were battling the disease and in need of assistance.

What she didn’t know then was that, one year later, she would be a recipient of funds raised at the Lewiston Stone House event.

“In July this year, I was diagnosed with breast cancer,” LaFlair said.

When she began treatment, LaFlair was reminded of the Lower Niagara Community Survivors group.

“When I was diagnosed, I was sharing with my coworkers and friends at the hospital, and I told Chris. She reached out to me and said, ‘Hey, do you remember when we were at this fundraiser? Take a look at this. You should see if you want to fill out the application,’ or whatnot, so I did.”

LNCS board member Dina Potenza explained, “We gave her a call to find out what’s going on and see what her needs were going to be. We met with her. And then we took on some of her monthly bills.”

Simon said, “One of the reasons that we took care of her was the fact that she had been somebody who had actually, before she had cancer, that she had actually come forth and volunteered. Not ever suspecting that she would ever need help, she was somebody who was out there trying to help others. So, in the case of worthiness, she was extremely worthy of being helped.

“The other reason is that what she’s going through now is what one of our members had just gone through years prior. And so, we were very familiar with the struggles that she was going to encounter. So, we wanted to help her. Because when one of our board members had had cancer, there was not an organization like this out there to help people.”

LNCS provides support to people who are fighting cancer and in need of a helping hand with day-to-day challenges – whether it be maintenance work or monetary concerns.

Having the organization’s support, “It was really great,” LaFlair said. “It showed a lot of community support, I think to me. … I was at the fundraiser, which was kind of random that I had been with (them) before, knowing (the group) before this was in my life.

“And my family’s out of town. I’m a transplant to Buffalo. My husband and I don’t have a lot of people here, so it’s like another extension of people that are supportive and helpful. Because it’s kind of just us a lot of the time.”

Those in a similar situation are encouraged to visit http://communitysurvivors.org/.

“If they just apply, then we can meet with them; we can see what their needs are, and go from there,” Potenza said.

“See what we can do to help them,” Simon added. “If there’s anything we can do to lighten the load, we want to do something to help people, is our goal.”

LaFlair said her perspective on life has changed considerably in the past year, since she volunteered at the “Rockout Cancer” fundraiser.

“And I do look at things different now. Next week I’m going to do the American Cancer Society walk with some of my in-laws in Rochester; and we have raised almost $500 just on Facebook, doing that. So, I am more active in those kind of things now.”

LaFlair moved to Niagara Falls because, “I met my husband (Matthew) in college, in Morgantown, West Virginia. And he is from Syracuse. This is kind of in the middle of Pittsburgh and Syracuse. So, when we graduated, we moved here and he’s a Bills and Sabres fan.”

Notice she said, “he’s a Bills and Sabres fan.”

“I’m Steelers and Penguins. But we both like the Yankees,” LaFlair said, smiling.

The second annual “Rockout Cancer” event was held last month at the Stone House. Early signs point to the event raising more money than the $21,000 or so donated in 2018.