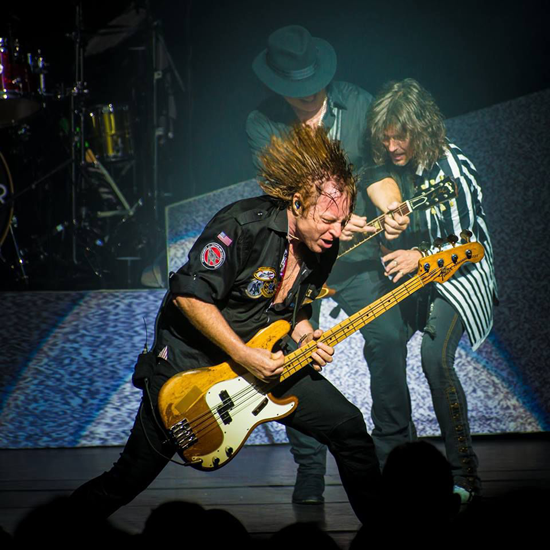 With Foreigner, it's all about music (not members)

Some fans had a bone to pick with Foreigner when the band performed at Artpark in 2012. With founder Mick Jones not on stage in Lewiston, there were no original band members in the lineup.

Still, once the music began and all those familiar songs started playing – “I Want to Know What Love Is,” “Waiting for a Girl Like You,” “Head Games,” “Double Vision,” “Juke Box Hero” – it was hard to find someone not having a good time.

Jones’ status for next Tuesday’s return trip to the outdoor amphitheater is uncertain.

In a phone interview Wednesday, bassist Jeff Pilson said Jones is “very healthy” and “doing great,” but not performing at each concert this summer.

“You know, I think it’s kind of a beautiful thing that he doesn’t have to play all the shows, that the music is such a loud statement of Foreigner that he doesn’t even have to be there,” Pilson said. “But when he’s there, it’s great. We have a lot of fun.

“His health is good. I mean, he shouldn’t do the kind of schedule that we do – not really for health as much as he doesn’t have to. So, you know, let him be Brian Wilson. Stay at home and work on music.”

Foreigner is sort of a unique entity. Much like Menudo, The Beach Boys and The Mighty Morphin Power Rangers, it’s the end product that matters – not necessarily the players involved. The performers might change, but the entertainment value remains.

“I’m just so pleased that we are the kind of band that can do that. Because not every band can; not every band is able to have the new and the old incarnations of the band get along and play together and have fun. But we are,” Pilson said. “And to me, it speaks volumes about how great the individuals are. I mean, the original band guys are just great people. And we’ve become very close over the years now. And every time we do these shows, it’s so much fun.

“And like I say, what a fabulous thing: You get to give the audience the history of the band right there on stage. And that’s just, to me, that’s just incomparably cool compared to what most bands can do. And I’m very proud of the fact that we can do it, and the show’s just come off so amazing every time. And it’s just ridiculously fun.”

He said fans “love” “Super Foreigner” – but, regardless of who’s on stage, “It’s the music of Foreigner that’s brought everybody together. It’s never been image or any of that extraneous stuff. It’s always been about the music. And watching the original band do the music, and watching us to the music, it’s two different interpretations, but it’s the same music, and it’s the same band. And that’s just awesome.”

“We hear that every single day; many times. You know, we had 16 Top 30 songs and people kind of don’t realize that. And you’re gonna rock; you’re gonna have a lot of fun; you’re gonna be singing and participating; and it’s gonna be a real fun time.”

Plus, frontman Hansen will likely scale the side of the stage.

“He’ll climb up something, I’m sure (laughs),” Pilson said.

Foreigner headlines the final 2019 Artpark “Tuesdays in the Park” concert of the summer season. The Aug. 27 show begins at 6:30 p.m. For more information, or for tickets, visit www.artpark.net, or stop by the box office at 450 S. Fourth St., Lewiston.