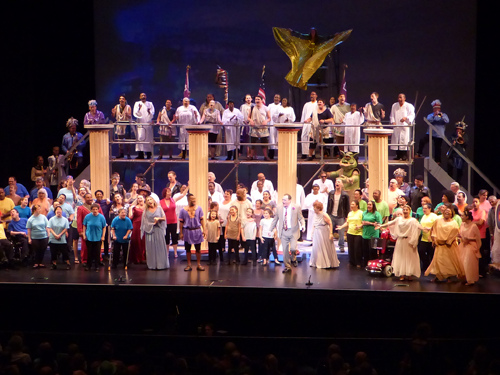 "Artpark Bridges" participants are shown in the 2018 production of "The Odyssey."

On Tuesday, Artpark & Company’s concert season will come to a close with classic rock hitmakers Foreigner returning to the amphitheater stage. The Aug. 27 concert is part of the “Tuesdays in the Park” presented by M&T Bank series. The show will begin at 6:30 p.m. (gates open at 5 p.m.).

The Thurman Brothers, a local musical mainstay, was selected in an opening act contest conducted by local radio station 97 Rock.

Foreigner’s live shows are packed with memorable songs such as “Jukebox Hero,” “Double Vision,” “Feels Like the First Time,” “Cold as Ice” and “Long, Long Way From Home.” A highlight of their concerts is when the band invites a local singing group on stage to help out with their biggest hit, “I Want to Know What Love Is.”

At Artpark, the band will be joined by People Inc., participants in the “Artpark Bridges” community engagement program, as well as students ages 9-17 from the Artpark Theatre Academy. The choir, made up of about 20 people, has been rehearsing the song over the past few weeks with Artpark Theatre Academy Music Director Patrick Towey.

Foreigner has confirmed they will donate half of the evening’s CD sales to “Artpark Bridges.”

Limited general admission tickets remain and are $22. Purchase tickets online at artpark.net or tickets.com; by phone at 1-888-223-6000; or in person at the Artpark box office, 450 S. Fourth St. The listed ticket price includes a facility fee; additional fees apply for online and phone orders.