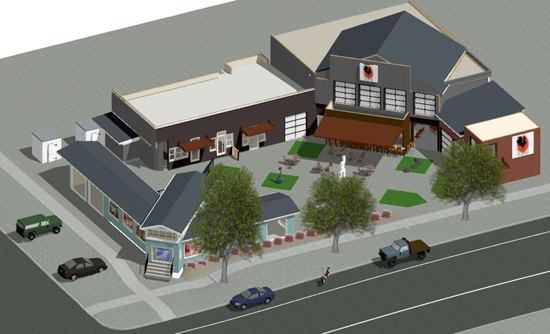 Pictured is an artist's rendering of the potential "Gallo 2" and Fourth and Center streets plaza remodel. The property is located at 402 Center St., in the Village of Lewiston. (Images courtesy of Giusiana Architects & Engineers

Fine art will meet coal-fired pizza when Michael Hibbard makes over the corner of Center and North Fourth streets in Lewiston.

The restaurant owner and artist submitted plans to convert the former Grandpaws Pet Emporium and a portion of the current Brewed and Bottled into a larger Gallo Coal Fire Kitchen. His proposal calls for Brewed and Bottled to move down into the space closest to Fourth Street. What’s more, Sgt. Peppers Hot Sauces will occupy the plaza’s middle unit; and the corner pavilion will be mostly enclosed, with spaces designed for art or retail.

“The main thing is we needed more space for the existing Gallo,” Hibbard said Tuesday. “At the time, we were negotiating a space in Buffalo that made sense for us, as well, and we would operate two: one in Lewiston and one Buffalo. This opportunity came up, to purchase the space on Center Street, and what we projected out for the Buffalo location, we really felt strongly that we could do the same thing in Lewiston. So, numbers-wise, it made sense.

“And also to look at that piece of property that was so underutilized, and be able to develop something that is really what the village needs – you know, not only a restaurant, but a community space to represent art and represent not only our business, but other rental businesses in there – which we anticipate three – would be a great use of the space.”

In moving his signature eatery to Fourth and Center, Hibbard will have additional space to offer outdoor seating, a patio bar and a second-floor banquet room.

“The new Gallo will have Gallo Coal Fire Kitchen in it, (plus) Gallo Pronto, which would be our quick service concept that we do right now with wineries and breweries and distilleries,” Hibbard said. “What that is, is you can kind of walk up to a counter and get premade sandwiches – more of a café style.”

Sgt. Peppers owner Neil Garfinkel said both his business and Brewed and Bottled – owned and operated by his daughter and son-in-law, Jessica and Chris Budde – were on the verge of moving before Hibbard took control of the plaza.

“I’m very excited,” Garfinkel said. “We were about to leave. … Chris was three days from taking his cooler out. And they saved us.”

Business acumen notwithstanding, Garfinkel noted, “Gallo is my favorite restaurant; I go there once a week.

“The design of the plaza is fantastic. Just excited about art, and a beautiful plaza. This has looked bad for years. And we’ve had tenants in and out. Now we’re gonna have strong tenants.”

Hibbard said, “There was obviously somewhat of an emotional connection to both of those tenants. And not only moving our concept down there as a restaurant concept would help make more use of that space, but we also were connected to those two business owners, and really felt that, if they were gone from this community, it just really didn’t make sense.

“They’ll be in a location now that we’ll all feed off of each other. And I firmly believe that the more business and the more activity in Lewiston, it just benefits everybody.”

Architect David Giusiana of Giusiana Architects & Engineers detailed Hibbard’s plan at Monday’s Village of Lewiston Planning Commission meeting. One of the biggest changes, he noted, will be removing both the metal fence and the majority of the pavilion’s pillars.

“The first big gesture is that we’re going to be taking down the lion’s share of all this whole big section in here,” Giusiana said of the posts in front of Brewed and Bottled. “All of those pavilions and columns will be removed in an effort to open up the courtyard and hopefully make the commercial space both for the Gallo restaurant, Brewed and Bottled and Sgt. Peppers a little more accessible, a little more open.”

He further noted, “What would be the previous Grandpaws space and the current Brewed and Bottled would become the lion’s share of the restaurant. There would be a small addition that would link the existing space with a section of the previous pavilion area out in front. That would become the new entryway. Again, another attempt to try and bring the building closer to Center Street, and engage, and make it more commercially viable.

“Brewed and Bottled would continue in there, but would take over what’s been different cafés and tearooms … the space here on the end.”

Hibbard has spoken with local elected leaders about adding pieces of art in the village – specifically in the plaza.

Giusiana said, “Another big sort of development gesture is that the corner pavilion, especially the kind of higher elevated space, would all become an enclosed art gallery space. It was actually the mayor who suggested the idea of having a whole series of windows and have them look into the space and allow you to see the gallery when it’s closed.”

The project, as proposed, wouldn’t require any new variances – and actually calls for less structural coverage. Parking spaces, or lack thereof, won’t be an issue, either, as the Zoning Board of Appeals already waived such requirements for this parcel of land.

Planning Board Chairman Norm Machelor said, “It’s nice to see.” He called the plan, “a big improvement,” and “hard not to like.”

His colleague, Joseph Sorce, noted the corner would become “another destination for our village.”

Their board approved the proposal by a 4-0 vote. Member Tasia Fitzpatrick was excused.

Hibbard’s plan isn’t expected to meet much friction from the Board of Trustees. Mayor Anne Welch already endorsed his plan at recent events.

If Hibbard does, in fact, receive final municipal approval in coming weeks, he said, “We hope to be open by April/May of 2020.

“The involvement with not only the restaurant, but the art space and the community space, which I’m working on right now with organizations like Castellani Art Museum, Artpark – we’re working with them right now, as well. We’re working with the municipalities, the Town of Lewiston, the Village of Lewiston. To make that the right community space is important for all of us.”

Pictured is an artist's rendering of the potential "Gallo 2" and Fourth and Center streets plaza remodel. The property is located at 402 Center St., in the Village of Lewiston. (Images courtesy of Giusiana Architects & Engineers