On Tuesday, a Beilein was in the national spotlight, as John Beilein was formally introduced as the Cleveland Cavaliers head coach.

Beilein was introduced by Cavaliers Majority Owner Dan Gilbert, as well as General Manager Koby Altman, in front of a jammed crowd at the Cleveland Clinic Courts in Independence, Ohio.

Beilein was joined by a plethora of family members in the audience, as they watched John make the leap from the college basketball ranks to the National Basketball Association.

Beilein recently coached at the University of Michigan, where he guided the Wolverines to two national championship appearances. Prior to Michigan, Beilein coached at West Virginia, Richmond, Canisius, Erie Community College, Nazareth and LeMoyne. Beilein is also a Niagara University alumnus.

Gilbert opened the presser with some remarks regarding Beilein. Gilbert noted his collegiate success, as Beilein has reached the NCAA Tournament with five different programs, but also Beilein’s ability to work with a young roster. Currently, the Cavaliers roster holds players between the ages of 19 and 29, which is relatively young in the NBA.

“He develops young players and he has an instant bond with young players,” Gilbert said. He added how he noticed Beilein working with Cavs forward Larry Nance Jr. prior to the introduction.

“He’s a coach by nature. As a person – I met John 11 days ago – and we hired him eight days ago. Then seven days ago, we went to the (NBA) draft lottery together. It happened very quick. … They (Altman) uncovered many great candidates and finally ended up with John Beilein, who I think is the best choice for the Cavaliers. … John’s experience and what he brings, all the qualities he has, he’s authentic, he’s charismatic, warm, he has all the integrity in the world, (is) a tireless worker, he’s tough, he’s direct, he’s honest. He’s a guy you would want as head coach,” Gilbert said.

Gilbert added that, with Beilein, he feels “very confident” in the team’s future moving forward. He also thanked Altman for his search efforts and hard work in the process.

Altman had similar praise for Beilein, and said the 800-plus wins and countless NCAA Tournament appearances felt like a formula that could bring success to the Cavs organization.

“Beyond all of that, this is an incredible human being,” Altman said. “You feel that the second you’re in his presence. That’s sort of what we needed. … We wanted a cultural driver and a leader. We wanted a teacher, we wanted an innovator – someone that’s going to be able to adapt on the fly to personnel and to the times. And then we wanted an incredible communicator. On top of that, we wanted someone who embraced analytics. Coach Beilein checked all those boxes, to the point where, after our initial meeting, some of my guys were looking like ‘What’re we doing here? This is our guy.’ ”

“We’re going to really rely on John to start a culture here of core values, to create a foundation for our guys to be successful and we’re just super excited for him to drive this thing forward,” Altman added.

Beilein agreed to a five-year deal with the Cavs last week, which he said all came together quickly. While the move from what he called “the greatest university in the world” was difficult, he said the transition to the Cavs seemed like a perfect move.

“I see a lot of potential and a high, high ceiling with the Cavs organization that I saw at the University of Michigan, that I saw at West Virginia, that we saw at Richmond, Canisius, LeMoyne and all the way back to Erie Community College and Newfane Central. It’s been a great week, not a good week, but a great week.

Despite all of Beilein’s collegiate success and move to primetime in Cleveland, he began his career as a head coach at Newfane High School in Niagara County. He flashbacked to his days at Newfane and how he thought, at one time in his life, that job was the best to have. Additionally, he said his climb up the ladder in the coaching ranks has truly gone through every rank.

“When I got the head job at Newfane Central in ’77 I think, that was like ‘I made it.’ I’m a varsity high school coach. And then, when I went to Erie Community College, my dad said, ‘Why are you doing this?’ I was making $7,000 a year at the time. ‘You’re leaving a great job that pays $7,000 per year, why are you leaving? You’re in the union,’ ” Beilein said with a laugh. “It is unusual, I guess. This is another opportunity on this incredible journey that Kathleen (Beilein’s wife) and I have been on.”

Beilein said to the audience how he grew up cheering for the Buffalo Braves and Buffalo Bills, which further showed his Western New York roots. Additionally, he said his first Major League Baseball game was attended in Cleveland.

Beilein will take over a Cavaliers team that finished 19-63 last season. Additionally, he’ll lead a roster that has the likes of past all-star Kevin Love and veteran Tristan Thompson, as well as budding stars like Cedi Osman and Collin Sexton.

The Cavs own the fifth pick in the upcoming NBA draft, which will give another young talent for Beilein to develop. 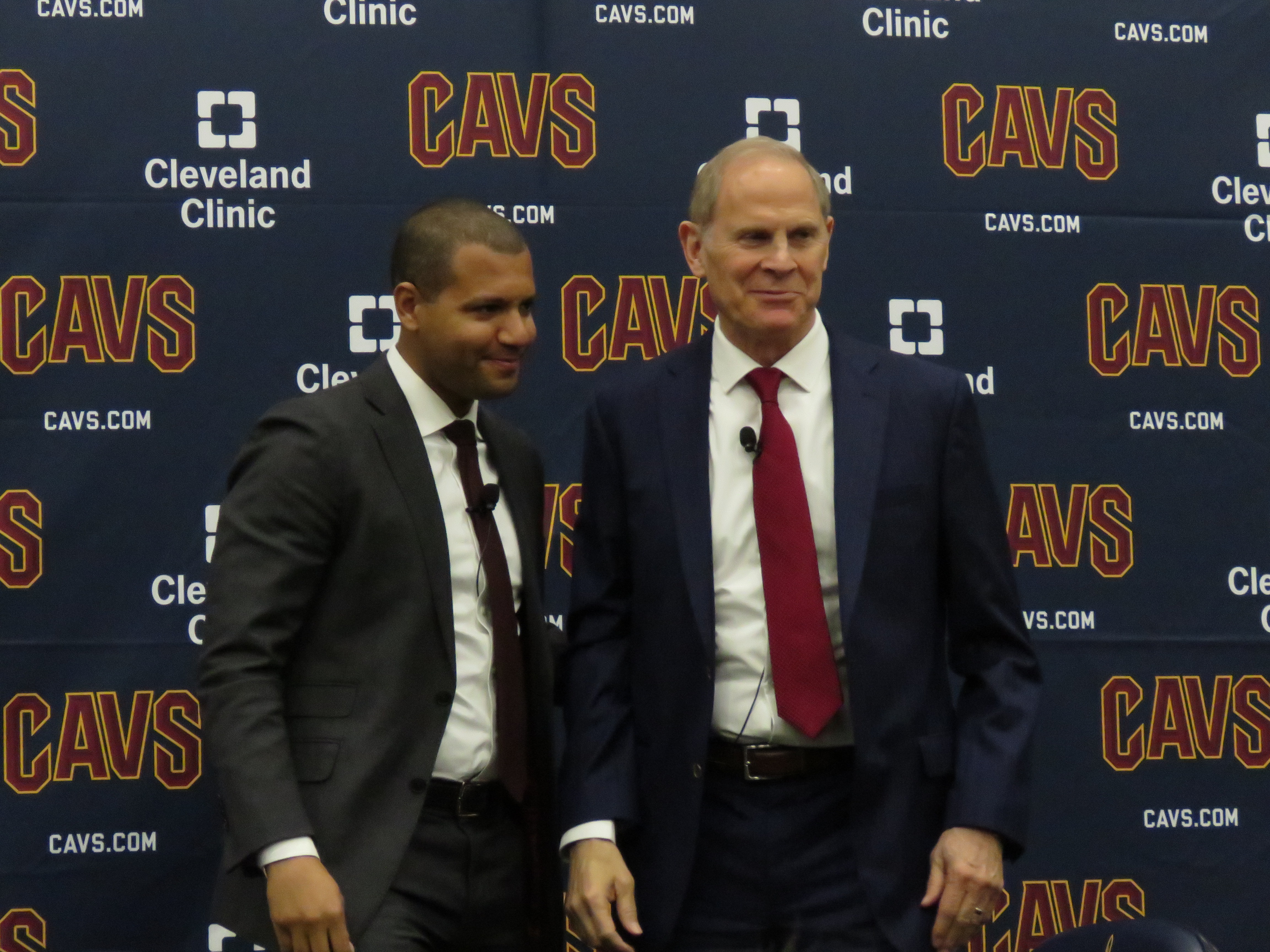 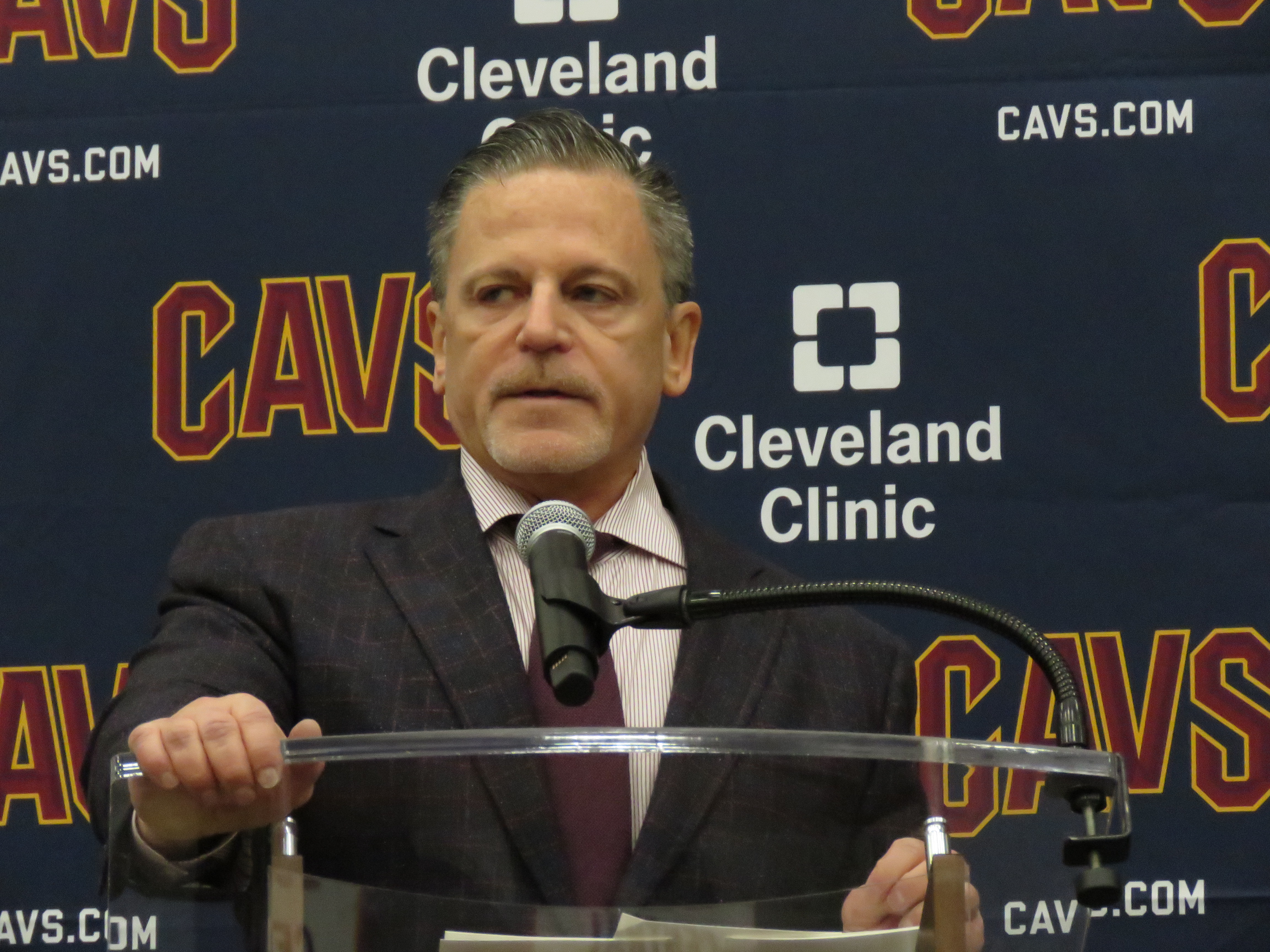