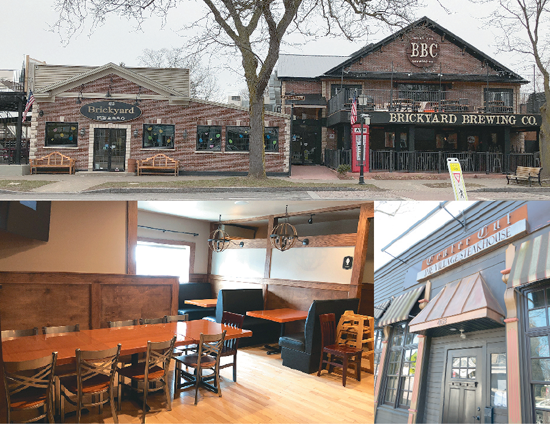 Big changes are taking place at The Brickyard Pub & B.B.Q. and Brickyard Brewing Company. At the same time, patrons have found more menu options at Center Cut: The Village Steakhouse.

The year was 1994, and two fresh-faced college kids were looking to buy a restaurant in Lewiston. They wanted to open a barbecue joint on Center Street, but a property owner told them they were too inexperienced.

So, they headed over to Cayuga Street, and opened Tin Pan Alley, instead.

Now, the business partners – who also own The Brickyard Pub & B.B.Q., Brickyard Brewing Company and Center Cut – are about to pay it forward.

“Changing of the guard,” Matthews said.

“Changing of the guard,” Bryan echoed. He explained, “One of our employees, he heard rumors that people were starting to come to us, looking if we wanted to sell (Tin Pan). We hadn’t really thought about it. And you know, Eric and I had a conversation. And one of our employees got nervous that it might be changing hands, and came and asked if we’d sell it to him. And we decided it was good timing for Tin Pan, and for us, for him – to give him an opportunity.

“It’s treated us great for 25 years. It’s given us what we have here. Let somebody else have a chance in town – a young kid who’s worked for us for 10 years. He deserves the opportunity to make it work.”

Tin Pan chef William Castiglione is finalizing a deal to purchase the restaurant from Bryan and Matthews.

“It needs some love,” Bryan said. “Right now, with the expansion of the brewery and what’s going on over here, we don’t have the time. It’s not fair to the staff, to the customers, to everybody. We don’t spend enough time there. It needs an owner-driven operator.”

“The biggest thing for us is we’re trying to promote our beer here” at the BBC, Matthews said.

Since opening in May 2017, the BBC’s second-floor banquet room has become the go-to place for large events, club meetings and fundraisers. And those who’ve eaten there – or driven by on a warm night – can attest to the fact the first-floor restaurant also is jam-packed on a regular basis.

Bryan and Matthews are working with brewmaster John Meteer to expand the BBC’s popular line of craft beverages.

“We’re trying to promote the off-site sales of beer – trying to get kegs in different locations, and working with a couple of distributorships down state to try to work things down there,” Matthews said. “And in order to do that, we have to ramp up what we have to do here.

“There’s just not enough hours in the day. I mean, we both put in 60 hours a week-plus. In the summertime, it gets even worse. So, we kind of saw the writing on the wall to kind of consolidate – to where you put your eggs in one basket and try to do the best you can.

“It’s not that we don’t love Tin Pan, it’s just that 25 years – somebody’s got to take the torch and keep it going.”

Selling Tin Pan to Castiglione will enable Bryan and Matthews to help a budding restaurateur in the same way property owner Bill McDonald once helped them get their start at that location.

“That’s how we looked at it,” Bryan said. “Eric and I talked, and we said it’s a feel-good sale, that someone that’s worked for us and has worked hard is going to be given the chance, and hopefully take it and run with it.”

Tin Pan’s pending sale is one of many changes across Bryan and Matthews’ four-restaurant footprint.

Over the winter, Bryan and Matthews renovated the back of The Brickyard, removing the banquet room, adding additional seating, and redoing the bathrooms.

“It was time to make a cleanup,” Bryan said.

Matthews noted the renovation was possible because groups could use the BBC while The Brickyard construction took place.

When the work was finished, “We gained about 35 seats, and two brand-new, beautiful bathrooms,” Matthews said.

Customers now have additional space to eat or drink when The Brickyard gets busy.

“On Fridays and Saturdays when you are at capacity and don’t have a patio in the wintertime, it’s nice to have an extra 20-30 seats,” Matthews said. “Plus, we added booths back there, which everybody loves booths.”

“We’re quite happy with it. People seem to notice,” he added. “That’s the best thing about it, is when people actually come in and tell you. Plus, they’re handicapped-accessible now. … It’s nice when somebody actually comes in and acknowledges your work, because it makes it worthwhile.”

“We try to keep our properties to the best of our ability,” Bryan said. “I mean, that’s a constant update. We have a lot of people that come through the doors in here. So, there’s a lot of wear and tear. It’s tricky to do without really closing down for long periods of time. And we were fortunate enough, with BBC over here, that we just sort of shifted for a couple of days.”

For the first time, the BBC was open for lunch while The Brickyard was transforming. That gave Bryan and Matthews an idea. 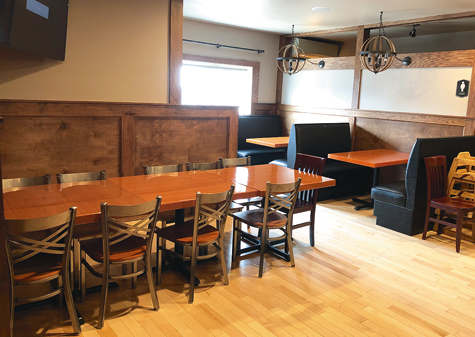 The renovated Brickyard back room. 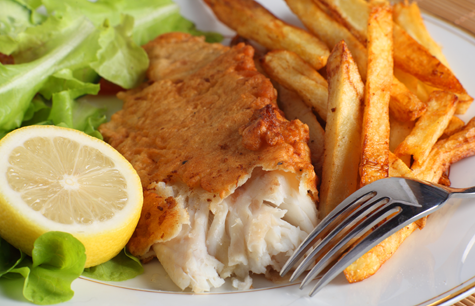 LUNCH AND FISH FRIES AT BBC

“That’s what we’re hoping,” Matthews said. “As long as we can get staffing.”

“I think this menu is more adapted to what a lot of people are going after these days, which is like almost a lunch-all-day-long experience,” he explained.

The BBC offers an assortment of sandwiches, wood-fired pizzas, salads and finger foods suitable for any time of day.

“A lot of people don’t go out for like dinner dinner anymore,” Eric Matthews said. “You’re either going upscale for dinner, or people just want to go out for burgers, sandwiches, stuff like that; salads. I’m sure if you go to all the chain restaurants, they’re not serving traditional smothered chicken and mushroom dinner anymore. You get a chicken sandwich or a chicken club sandwich with fries or tater tots, and that’s what you’re serving.”

The BBC recently made another noticeable change to its meal plan. Right before Lent, the restaurant began serving a Friday fish fry.

“It’s a big thing in the area, and we weren’t doing it,” Bryan said. “People were asking us to do it.”

“People enjoy it, and it’s ramped up through Lent,” Matthews said. “Hopefully, we can continue it on and keep it going” the whole year.

“It’s a staple in the Western New York area,” Bryan said. “This time of year, we’ve been almost maximum capacity on Fridays. And you have all your churches and firehalls and charity places doing fish fries. So, that’s good for us. It’s good for everybody.”

During this Easter season, The Brickyard also serves a Friday fish fry – with a barbecue flair.

“We do a Cajun crunch, which is Cajun-breaded, and then a beer-battered and a regular broiled,” Matthews said. 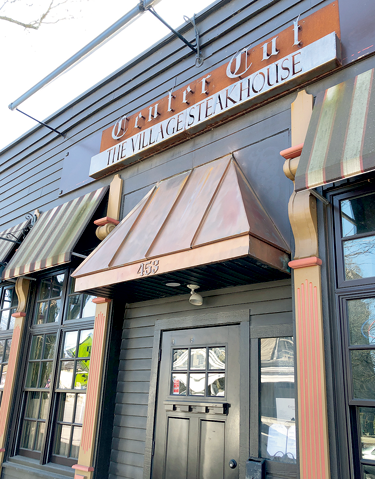 Rumors have circulated of late that Bryan and Matthews have shuttered their steakhouse, Center Cut, which is almost directly across the street.

That’s not the case.

They have a lease that runs through November. Between now and that time, Center Cut “is 100% open; going strong,” Bryan said. “Keep people coming.”

Center Cut has added smaller dishes, appetizers and bar foods to its menu of top-flight steaks.

“A little bit of modern prices,” Matthews said. “I don’t think the village was looking for, you know, 50-dollar-a-head steak-price-type-things. So, we kind of cut back a little bit.”

“We have a lot of single people come and eat, whether at the bar or by themselves,” Bryan said. “So, you know, we tried to create a little more value. We’re going to do that going forward. There’s going to be some more menu changes – more value-driven.

“It was a high-ticket item; and it works in the summer, but the other nine months of the year it’s tough around here.”

For those who do want a finer dining experience, or are celebrating a special occasion, they can still get a 10-ounce filet with lobster or other premium dishes. 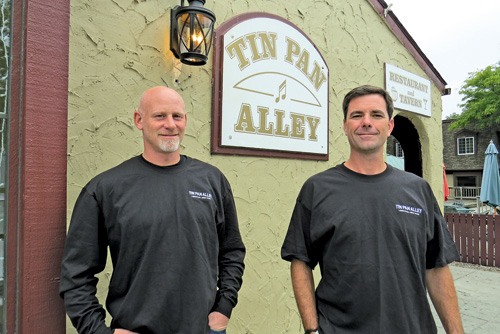 Castiglione, 35, is from Lewiston and has cooked in the village since 2002. The Lewiston-Porter graduate, on occasion, would speak with Bryan and Matthews about branching out.

He described Tin Pan as a unique property with a special level of loyalty.

“This place, it’s a staple in Lewiston,” Castiglione said. “The clientele we have is just phenomenal – not to mention it’s kind of just that neighborhood bar. It’s just got that real homey feel to it.”

“And one of the other things I really like, from the culinary aspects, is we run daily lunch and dinner specials. So, it gives me a chance to go outside of my menu on a daily basis. I have my regular big menu, but then on a daily basis I get to try new things. I get to get feedback from the customers on the specials and everything. It gives me a wide range of what I can actually put out from the kitchen, which I really like.

“I’ve worked at other restaurants where you could have the best special in town, but people come in and they like their consistent stuff they get off the menu, and nobody ever tries it. Here, our specials sell really well on a daily basis, and it really gives me an opportunity to explore different avenues of food and whatnot. I really like that aspect of it a lot.” 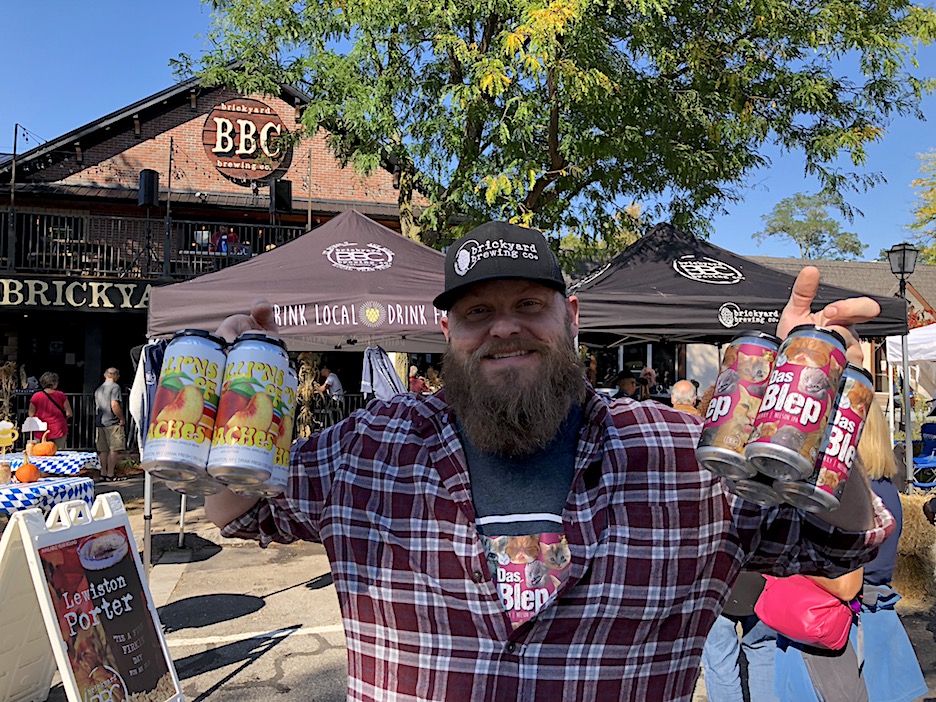 John Meteer outside of the BBC. (File photo)

Earlier this spring, Bryan and Matthews began transforming their Ridge Street property – a building that sits right behind the BBC – into something new: The Barrel House.

“We’ve had distributors come to us, looking for us to distribute our beer,” Bryan said. “So, we’re doing an addition in the back of the green house back there. The Barrel House. We’re putting in more fermenters.”

“Whiskey, wine. That’s John’s end. Our brewmaster is going to fill it with all kinds of high-end crazy beers.”

Steve Matthews said, “We’re sort of trying to stay on trend with what’s going on in the craft beer world right now. Pastry stouts are huge. Bourbon barrel-aged beers, etc. Everybody’s releasing them. Everybody’s doing it. If you don’t keep pace, you sort of become slightly irrelevant. You know, people want to know. It shows a little more detail in your process, and you know you’re going that extra mile. Sitting on a beer, aging it, and you’re blending it; it’s on par for what’s going on in matching the food world that you’re seeing today.”

The BBC will have more product on hand – which is saying something, because the brewing company already has a class-leading 17 to 20 beers on tap – in addition to creating beers for outside entities.

In the back building, “It’s going to be a little bit of production; kind of increase our ability to pump out everybody’s favorites – you know, 10 Pints, blueberry, White Bronco,” Meteer said. “We sell so much of those, especially in the summer, that it gives us a chance to brew those on a larger scale. And then there’s going to be a lot of (extra) room. We’re going to have a pilot system out there, and a lot of barrels: bourbon barrels, tequila barrels. … We’re going to put a big, burly Scotch ale in there.”

“We’re going to get weird, and then keep everybody filled with their favorites at the same time,” he added.

“We hear a lot of people, at beer events, they keep coming back to our table,” he explained. “And they say, ‘This is the best beer here.’ That kind of gives me a little confidence when it comes to getting White Bronco to a larger audience.

“It’s going to be a good summer, that’s for sure. Lots of good beer.”