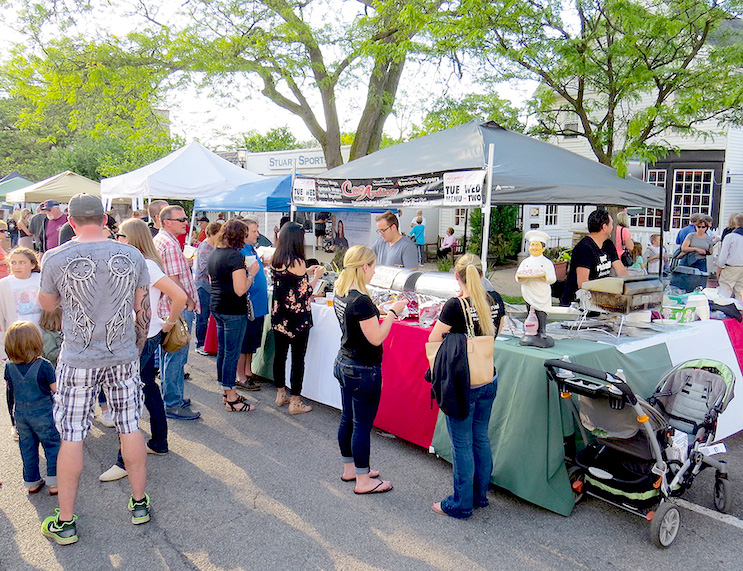 The Taste of Lewiston has been a popular stop for foodies in recent years. (File photo)

The Taste of Lewiston is returning this year – but with a twist.

It was announced at Monday’s Village of Lewiston Board meeting that the Niagara River Region Chamber of Commerce will coordinate the event, which is slated for Memorial Day weekend. Also new for 2019, participating restaurants will not use tickets, but rather charge a fee projected to be between $1 and $7 per tasting item.

The Lewiston Council on the Arts resurrected the dormant Taste of Lewiston in 2017, teaming with Corey McGowan Productions to present the Center Street celebration of food. McGowan recently sold his company and will not be a part of this year’s festival.

Chamber of Commerce board member and Apple Granny co-owner Chuck Barber on Thursday said, “We were very worried about losing the momentum of people coming down to kick-off the summer in Lewiston; to come down to the village, kick-off Memorial Day weekend, and enjoy all the tastes and sights of Lewiston.

“The restaurants were able to partner with the chamber, and the chamber was able to really step in and facilitate it this year, to keep it going so we’re not losing any momentum.”

He added, “We’re very excited to keep it the Taste of Lewiston, first and foremost. It’s the Lewiston restaurants that are going to be the primary people there.”

“The restaurants have a little bit more control of how everything’s going to be handled. We’re going to be offering different tastings, different samplings for locals and for nonlocals, as well, just trying to show the world what Lewiston has, as far as our culinary expertise goes.”

Barber said, “It’s been very successful; well-attended; a lot of people come down to the Village of Lewiston. So, it was important for us restaurants to keep it going.”

Restaurants and food trucks will keep Taste of Lewiston funds this summer. In the past two years, the LCA used the Taste of Lewiston as a fundraiser, requiring participants to give back a percentage of proceeds.

Rykaszewski said the monies received went into the community via LCA programming and events.

The Taste of Lewiston will take place Saturday, May 25. The Chamber of Commerce is making a donation to the LCA, which owns the event name and logo.

Also on Monday, trustees approved a number of summertime activities. The board approved:

•A motion to grant a request from Lewiston’s Memorial Day Remembrance Committee to hold the annual parade at 11 a.m. Monday, May 27. Center Street will be closed as the participants march down to Academy Park for a remembrance ceremony. A free luncheon will follow. During the parade, traffic will be temporarily detoured from North Ninth Street to Mohawk Street.

•A motion to approve the facilities request from Inter-Community Services Inc. (Ransomville Care-n-Share Food Pantry) to collect monetary donations on Portage Road at the Artpark entrance prior to “Tuesdays in the Park” events. A similar vote of approval was given to Community Missions, and Heart, Love & Soul to solicit donations on North Fourth Street ahead of the popular music concert series.

This is the collection drive’s 11th year.

Community Missions Director of Public Relations and Development Christian Hoffman said, “We continue to see more and more demand each year. When I started about six years ago, we were about 70,000, 80,000 meals that we were asked to provide to the community every year. Two years ago, it was 109,000. This past year it was 119,000.

“As the collection has grown each year, we just are so grateful for the opportunity.”

Mayor Anne Welch said, “I think it’s great that you do this, and we’re just glad that we’re able to allow you to come into the village and do that.”

•A motion granting the facilities request from the Niagara Wine Trail to host the 11th annual Niagara Wine Festival at Academy Park on July 27 and 28. 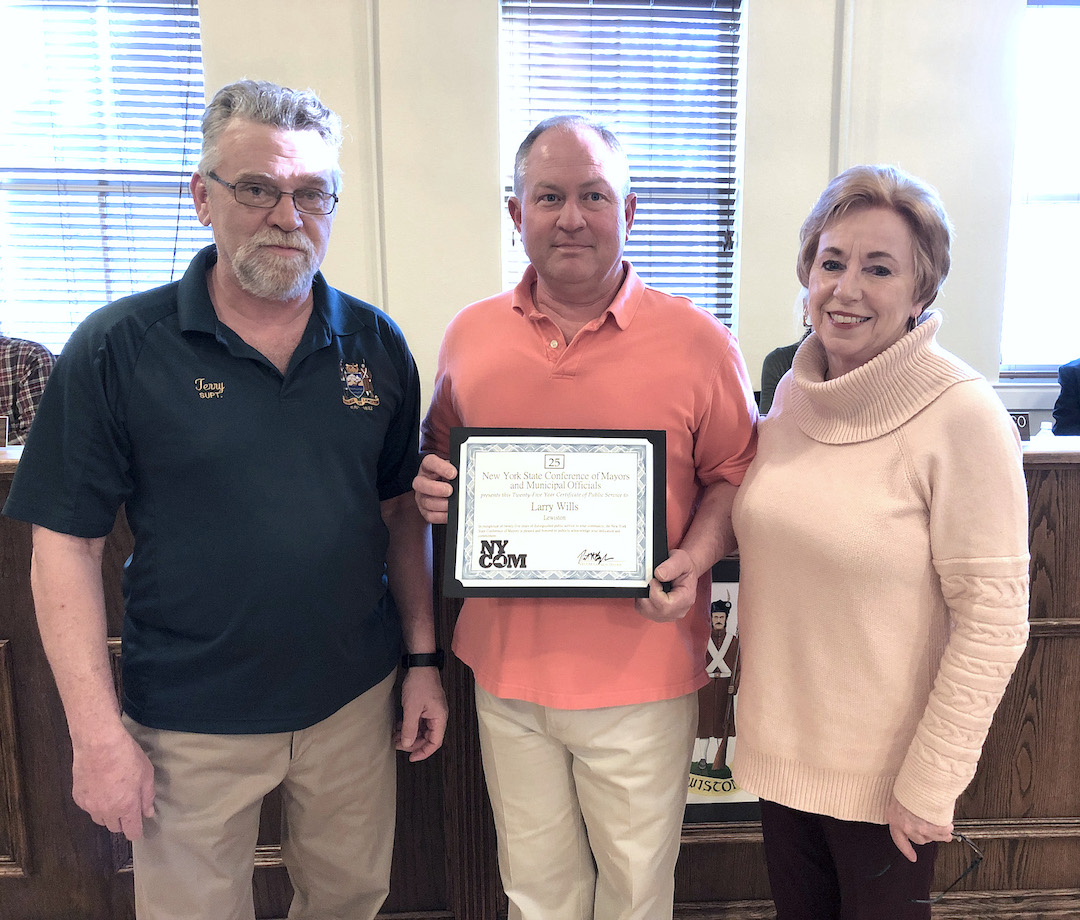 Department of Public Works employee Larry Wills was presented a 25-year certificate of public service award from the Village of Lewiston and the New York State Conference of Mayors and Municipal Officials. He was cited for dedication and commitment. Wills is shown, center, with DPW Superintendent Terry Brolinski and Mayor Anne Welch. 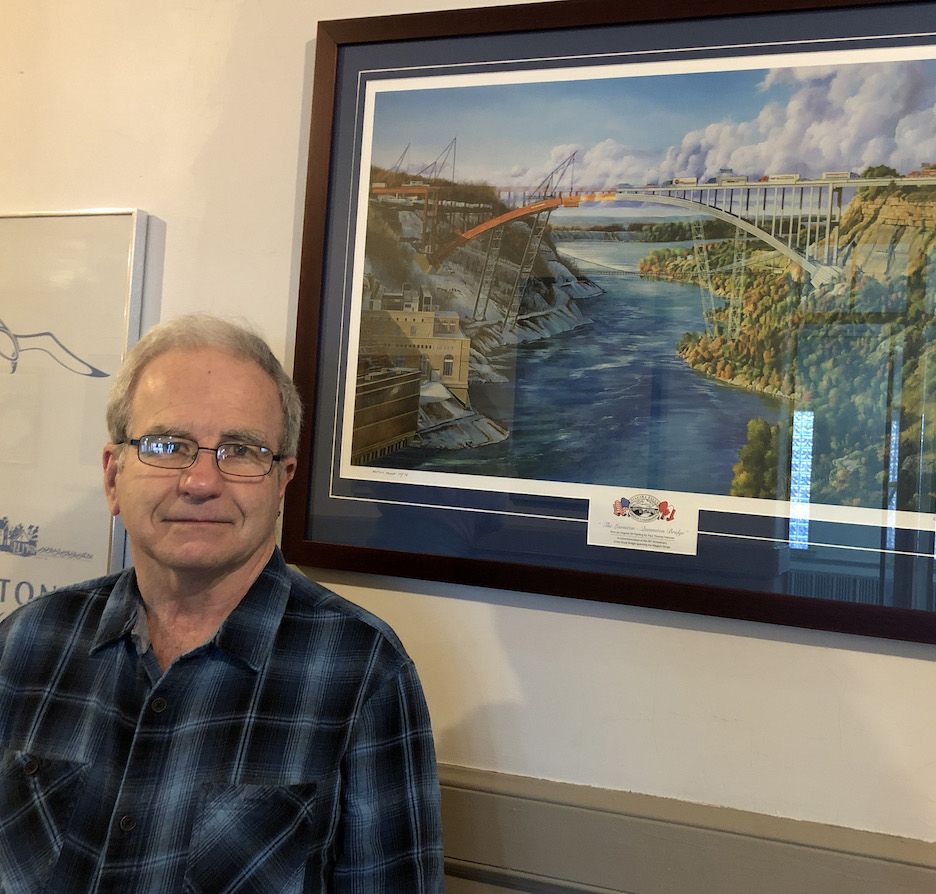 Village of Lewiston Historian Russ Piper has acquired a low-number Niagara Falls print from the estate of the late Paul Thomas Hanover, an award-winning artist. The original oil painting “was commissioned by the Niagara Falls Bridge Commission to commemorate the 50th anniversary of the new Lewiston-Queenston Bridge,” and is hanging in the organization’s office building, Piper said. “Paul struck 75 lithographs from the original, and there are a few signed prints.”

Piper said he was informed of the print’s availability by Sue’s Frame of Mind owner Sue Sullivan. He explained the Hanover estate was willing to donate the work under the condition it would be hung and preserved.