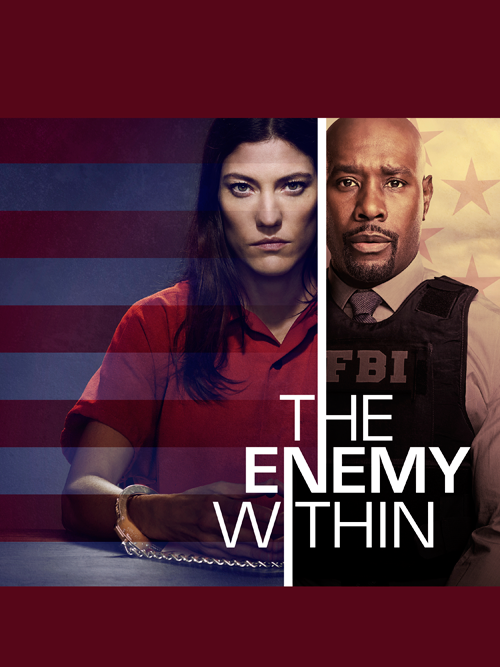 Erica Shepherd (Jennifer Carpenter) and Will Keaton (Morris Chestnut) on "The Enemy Within." (NBC key art)

'The Enemy Within' brings new twist to crimefighting drama genre

Had NBC pitched its new drama, “The Enemy Within,” as the story of an FBI team tracking down a revenge-seeking terrorist, we probably would’ve yawned and said, “Next.” I mean, how many times have we flipped on a show where the good-guy government is in deep pursuit of the bad-guy foreign operative?

Fortunately, NBC was smart and, instead, aired commercials wherein the lead, Erica Shepherd (superbly portrayed by Jennifer Carpenter), is imprisoned. The “hero” is a traitor – a former CIA agent who willingly gave up the names of her team members to a fanatic who promptly had these law-enforcers killed.

The promo worked, and we watched – and wondered.

Now, we know Shepherd must’ve had a good reason to do this evil act of espionage. Sure enough, we learn it was to protect her young daughter, Hannah (Sophia Gennusa), whom the terrorist, Tal (Alex Feldman), had targeted.

Not wanting her daughter to grow up bearing the weight of being the reason why four agents died, Shepherd didn’t reveal her motive. She quietly went to prison, and remained there for three years.

Cut to the present, and Tal has resumed his efforts to eliminate more agents seeking his incarceration. This forces FBI supervising agent Will Keaton (Morris Chestnut) to seek out Shepherd’s help. He is won’t-go-to-the-dentist reluctant to do this, because, as we soon learn, one of the agents Shepherd gave up was Keaton’s fiancé, Laine Heffron (Chelsea Watts).

Shepherd is skeptical, and not really interested in working with Keaton. However, seeing this “partnership” as a way to reconnect to her daughter, she agrees.

As she joins Keaton’s team, we see Shepherd has a beautiful mind. She is socially awkward, ends justifying the means driven, and keenly aware of what everyone around her is up to. And yet, we’re not entirely sure what she’s up to. Having spent so much time behind bars – and with so much guilt, shame and loss – what does Shepherd really want? Does she have a hidden agenda?

These questions, and this approach to storytelling, have made “The Enemy Within” different from other cop-type shows. The overall storyline is interesting, the two leads work well off each other – again, Carpenter is a stud as Shepherd – and the weekly crimefighting seems to mean more. This show is not a typical, miss-a-week-and-it-doesn’t-matter procedural.

On Monday, “The Enemy Within” gains a new cast member. Cassandra Freeman joins the show as Jacqueline Pettigrew, whom the network describes as an infusion of action and humor.

The actress has experience in comedy, but hasn’t yet tried her hand at this kind of action-oriented role. Freeman is the daughter of a journalist, and formerly ran a beauty/spa website, where she served as editor. She also hosts a podcast wherein she speaks with other actors and creative types, discovering what led to their “big break.” Freeman is naturally curious, and has carefully considered who Miss Pettigrew should be, and what she’ll add to Keaton’s team.

Learn more in this edited Q&A. 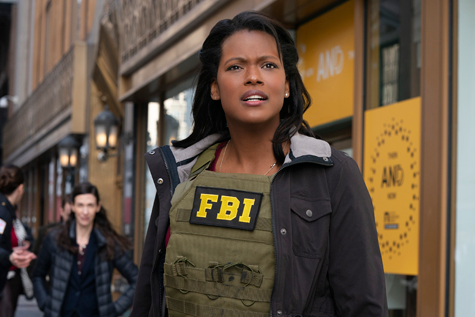 Q: I find “The Enemy Within” to be different. What did you like about this show?

Cassandra Freeman: It’s so funny: It's always been on my bucket list to be the super-edgy, hardcore, you know, she can kick someone’s butt sort of character. First of all, that was always on my bucket list, because I am the opposite of that. OK. I am nothing like that. OK. I used to be a comedian; like I'm very silly. But, I've always wanted to play one of these types of roles. That's one.

And then two … for me, it was also so different, that the main bad person is this woman; and her relationship with her daughter is so different. And also how this woman uses her skills to open up cases is very different than a lot of shows, too. ... She's very meditative. She’s like chess. This woman puts everything together like a great chess match. Where Keaton, he's much more action-oriented.

My character is much more action-oriented. We're sort of like, "Let's go do it; let's go do it."

And (Shepherd) sits there, almost like an actor, really, and thinks about, "But what is the motivation?" "But why?" She is the person who makes you slow down, and think, and she’s much more thoughtful. And in a way, it's much more female to go a little bit slower and be, almost, I want to say like nurturing. Like, "Why would someone want to do that? Let's go deeper." And then, once you go deeper, she uses that information to manipulate the crap out of the people.

I have not seen that show before.

Q: What did you like about Jacqueline Pettigrew, in particular? And tell me a little bit about how she's going to fit in with the team.

Cassandra Freeman: Jackie Pettigrew is perfect for me, because she's like a breath of fresh air for the team. Everyone else sort of has their heads down in their files, and I think you see this a lot – especially with my relationship with (Jason) Bragg (Noah Mills) on this show – we become sort of like a partner duo out there in the field, and they have a very great sort of repartee with each other. I love it; it’s just a little bit of ‘Moonlighting’ between the two of them, because there's something there brewing; maybe romantic? Who feels that way about whom? You got to watch the show to figure out who feels that way about whom on the show.

So, between that, and her wittiness, and her sassiness, it's pretty cool. But I love how she can switch that all off in a second to go back into a job. And there's an episode later in the season that really shows why she's so great at what she does.

Q: The sassiness and the humor, obviously, is no problem for you to bring to the table. But, like you said, as far as the action and the experience that the character has, I mean, to get into the storyline, we have to believe that all of these characters have this very complex and very sophisticated training – whether they've gone to Quantico or what have you. And so, you've got to sort of play this and make it believable that you have all of this crime knowledge and this law enforcement knowledge, but also the physicality of it, as well. And I'm wondering, how do you prepare for that, and what is the challenge in making us believe that your character – that you on screen – can really do all of these things?

Cassandra Freeman: What's great is, when you meet Jackie, you see her training the kids at Quantico. And she's basically a specialist with hostage negotiations, and she's a specialist with tactical issues on the ground – with how to hit people. But the way to even train for that, I mean, truthfully, a big part of it was we are looking at people who I really admire in TV and film, because here's the thing: This isn't a documentary we're doing. It’s an action/spy thriller show.

So, I was interested in just the physicality – like you said, how do people pull that off. Well, Sigourney Weaver killed that genre for me. I love Sigourney Weaver. I mean, I trust anything she does. If she has just a tank top on, you know she’s about to save that day. So, a lot of it comes from her.

So, having all those people on set every day has really been helpful, because I’m not as graceful as Jackie is; and she's very solid on her feet, and I am not solid on my feet like Jackie. 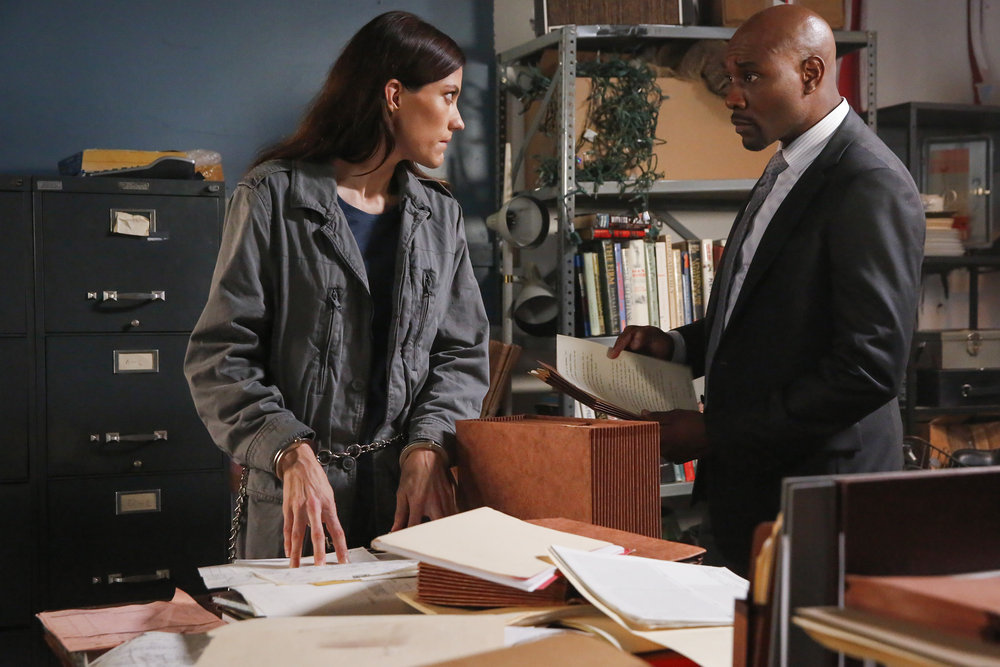 “The Enemy Within”: Jennifer Carpenter as Erica Shepherd and Morris Chestnut as Will Keaton. (NBC photo by Will Hart)

Q: You've worked with some really great actors throughout the course of your career (including Denzel Washington and Mike Colter). I've seen Morris Chestnut in a bunch of things. He's always been fantastic. Jennifer Carpenter is sort of a new entity for me. What have you gleaned from Jennifer and from Morris? I know you've only been working with them for so many months, but what can you tell me about them as actors?

Cassandra Freeman: From the moment we sat down to do our first table read, with Mark Pellington and our amazing showrunner, who is just so collaborative and, like, his brain, I don't know how he comes up with this stuff. He's like a genius, but he is the sweetest, most collaborative man ever probably on TV. Period.

So, we all sat down to do our table reading. To see Jennifer Carpenter act was like an acting class.

Jennifer Carpenter, if you meet her, she seems like the girl next door. And then to see her act is an acting class. I keep telling people she's like the mama bear with the dragon that comes out once you start to poke at it. Like, a dragon comes out of her. Her whole face and demeanor changes. If nothing else, it’s worth watching this show for that performance.

And, even if you know Morris Chestnut as an actor, I think you’ve never seen him play this type of character before. The type of pain that he brings to his character every week, and yet strength, and this feeling of, like, he literally would walk through fire for people. I've never seen Morris Chestnut play that type of character before. And to be up close and personal to it, and to see him be the type of actor who can literally be cracking a joke with you one second and then on action bring the fire – it's a rare thing.

And like you said, I've worked with many different actors, and not everyone's able to do that on the flip of a dime. And he's in every scene, Morris Chestnut, and then the two of them together – I really think it makes for great TV.

I haven’t seen anything like this on NBC. It looks like a cable show on a network.

“The Enemy Within” airs at 10 p.m. Mondays on NBC – directly after “The Voice.” Learn more about the show at https://www.nbc.com/the-enemy-within.