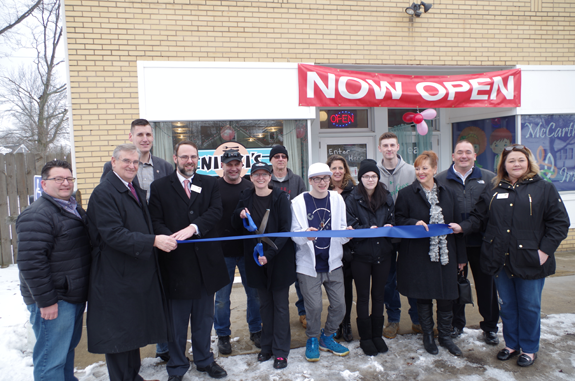 Nikki Pelsoni cuts the ceremonial blue ribbon on Thursday to mark the opening of Nikki's Eats in Sandy Beach. (Photos by Larry Austin)

A woman who can feed an army has enlisted in the Island restaurant business.

Enlisted may not be the word. Drafted? The new eatery Nikki’s Eats in Sandy Beach was the vision not of its eponymous owner, Nikki Pelsoni, but her spouse.

“It was my husband and his friend’s idea,” she said. “He came home from working with his friend on one of the cars and he said, ‘You’re going to open a restaurant.’ And I said, ‘Okay.’ It’s a little weird, isn’t it?”

Despite having no restaurant experience, the couple has opened Nikki’s Eats in a building at 3432 Wallace Drive that at various times has been home to a beauty salon and dance school.

An Islander for the last seven years, Pelsoni said her main strengths in the restaurant are “I like to cook and I always cooked enough for an army.”

The menu is a mix aimed at the working class, for “guys heading to work, just getting out of work, heading to school, like teachers,” Nikki said.

Before the café opens at 6 a.m., Pelsoni makes her chicken noodle soup with homemade noodles, and black bean chili. Thursdays and Sundays, Nikki’s Eats has sausage, gravy and biscuits.

Eric Fiebelkorn, president of the Grand Island Chamber of Commerce, joined the Nikki’s Eats service when he had a BLT at the ribbon-cutting “with very light mayo, in case my wife reads this.”

“And I didn’t eat all the bread, if you believe that.”

“Sorry. I ate it all. It was great. The whole thing. I had extra mayo. Fine. Because my wife knows anyway,” Fiebelkorn said.

Fiebelkorn said the decor of Nikki’s Eats reminded him of another beach community, Margaritaville.

Nikki’s Eats is located in the heart of the hamlet of Sandy Beach on the Island’s north side and is home to one of the Island’s densest neighborhoods.

Though hamlet businesses are tucked away in corners of the Island, Nikki’s husband, Lou, looks at that as an advantage.

“We started looking for a place and I wanted something in a close neighborhood setting, not on the main strip to compete with everybody out there,” Lou said. “Just like what I had in the Falls. I lived at Ontario and 24th Street and had two small places like this to go for breakfast.”

“We looked at other places, but when we found this, I loved it because it had a little homey thing,” Nikki said. “It was a small, quiet neighborhood. As we got going and we opened, we got to meet all the neighbors. Everybody comes in and they’ll sit down and chat. I mean, we’ll get tables full and all of us will just be having one conversation together. It’s not like everybody is separate. Everybody, even if they don’t know one another, they’re talking to one another. So it’s very nice to have that.”

Lou said when they found the building, the owner, Dan Drexelius, helped them out with navigating the minefield of state red tape in order to open.

“I called New York state and tried to get those answers. Where do I go for this? And I got nowhere. Dan, within 15 minutes of talking to him, solved every question that I had spent days calling about,” Lou said.

Nikki’s Eats is open Tuesday through Saturday from 6 a.m. to 2 p.m.; Sunday from 7 a.m. to 2 p.m. The cafe is closed on Mondays and every third Sunday. 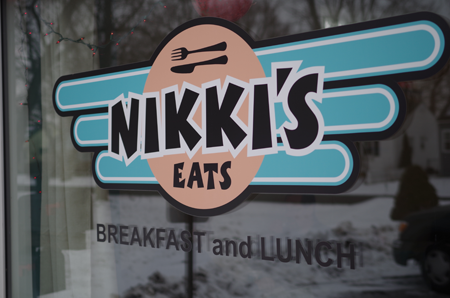 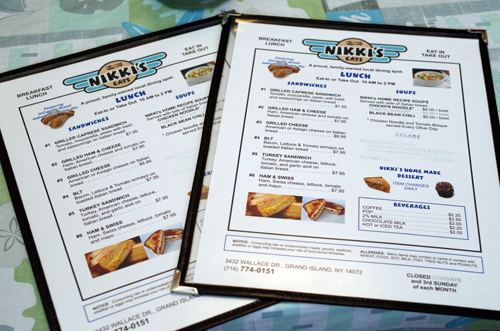