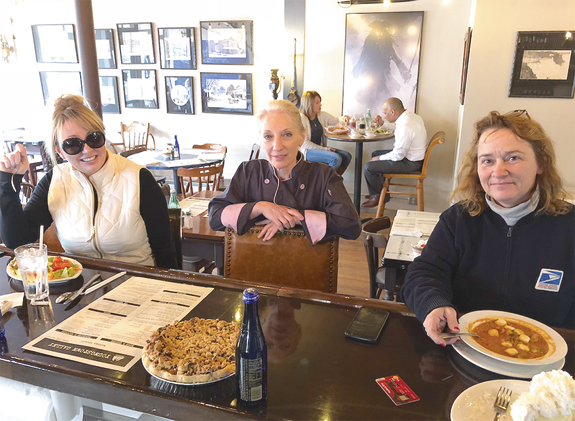 Rebecca Poletti is pictured, center, with Youngstown Galley patrons "Erin Mahoney" and Renee Higgins. Poletti also is shown with some of her kitchen creations.

by jmaloni
Sat, Nov 24th 2018 07:00 am
By Joshua Maloni
Managing Editor
Rebecca Poletti is typecast.
Though presently operating a full-service restaurant, the former Mangia Cakes Café owner is still thought of as a baker in some parts.
"It's interesting," she said. "I went to the store one day, and I had a huge flatbed of dinner items. And I walked out, and the lady goes, 'Oh,' she says, 'You're doing a lot of baking today.' And I looked down, and I went, 'There's meat here - like steaks - I don't get it.' Everything for dinner. But she called me a 'pastry chef.'
"It's like being an actress, you know? You got that one part you play and that's what they think.
"I totally am typecast."
While some people would fret at such labeling, Poletti said it actually makes for a lightbulb moment at her new restaurant, The Youngstown Galley.
Customers, she said, "are pleasantly surprised when they get here to see what's offered."
In her first year of business on Main Street, Poletti has, essentially, reinvented herself. A chef who was famous in Lewiston for her cookies, scones, pies and, more recently, heavenly breakfast offerings, has come to Youngstown and discovered dinner.
Afternoon and evening items of choice on the Galley menu include an assortment of salads, gourmet burgers and housemade fries, chicken and biscuits, stuffed meatloaf and a Friday fish fry.
"The way we're going is more Italian," Poletti said. "It seems to naturally go that way with me. I am Italian - Italian descent. So, we're doing more of chicken cacciatore, vodka sauce, Bolognese sauce, different sauces. Lasagnas. Gnocchis. People seem to like the scampi.
"I think the Italian's turned out to be my strong point."
Galley also offers a full bar and promotions such as "Wine Down Wednesdays." Of this, too, Poletti said patrons are "surprised at the extent of the wines that I have, and the beers. I don't think they realized to the extent that we have stocked the bar. They're just completely surprised."
Pleased, it would appear, as well, judging by the filled tables on recent visits.

To find success in a new endeavor is a challenge - and Poletti said she had plenty of speed bumps early on. However, she sought a new adventure and, over the course of the past year, Poletti realized she not only embraces change, but "I seem to enjoy it immensely. Starting new things, new ventures. I didn't know that about myself until I took this one on."
She added, "I've always taken on new projects. Even back in the day when AM&A's opened in The Summit Park Mall. I started there when they were brand-new. I worked at McDonald's when I was a kid. I worked in all the new stores. So, I'm kind of seeing this pattern in myself, now, that I seem to like new ventures. I opened up the McDonald's in the City Market when they first opened. I was 16 years old. But it was new. So, everything I've ever done, it's always been something new."
"This, by far though, with the beer and wine, has been the biggest and the hardest for me. I think just because of ... the magnitude of it. For me, it's a lot. But it's been good."
With her new, expanded menu, Poletti has found a new, expanded audience.
"People are coming from Ransomville now; coming out from that way, up the lake; Lockport. A lot of new people from the Youngstown area," she said. "The front table there, they're my old customers from Lewiston. So, they're still coming and enjoying it, too. It's changed a little bit, but the demographic has grown."
Now, while Poletti has found success with her lunch and dinner offerings, she hasn't forgotten about the most important meal of the day. Galley offers a full breakfast menu, with out-of-this-world omelets, homemade pancakes and rosemary-infused biscuits, vanilla brioche french toast, and the River Region's best home fries.
Customer Renee Higgins of Sanborn said, "Her eggs Benedict is the best eggs Benedict I've ever had. Her quiche is really, really good, and you can't get it anywhere else. And her pies are outstanding, too."

Shown are some of the restaurant's breakfast items. 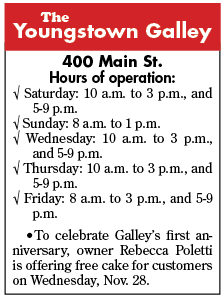