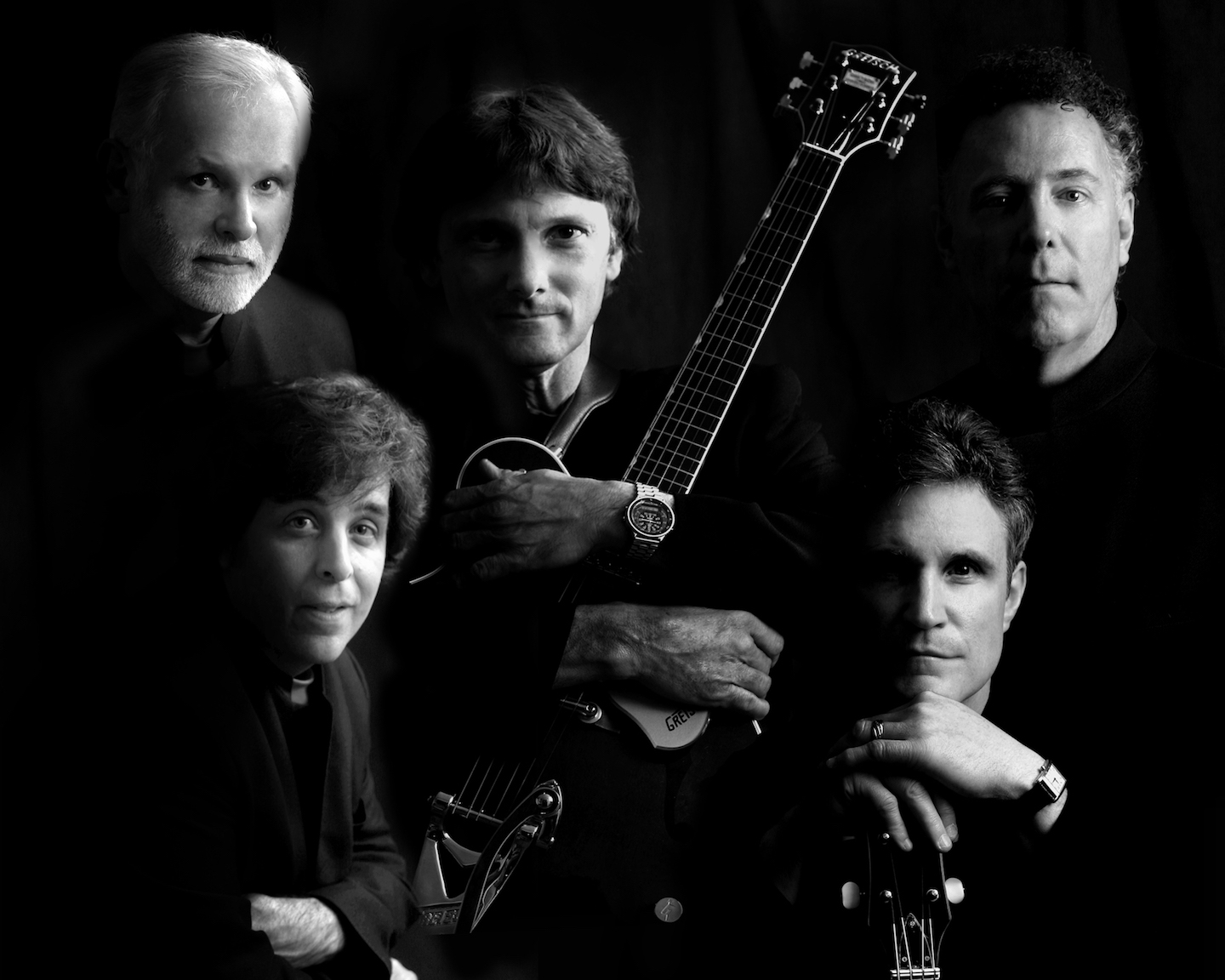 Wed, Aug 8th 2018 09:55 pm
By Zackary Kephart
While the Beatles led the British Invasion back in the 1960s, the BBC Band just may be leading the Western New York invasion right now.
The BBC Band, according to its website, is "a group of talented Western New York area musicians dedicated to capturing the original sound of the Beatles and other '60s music."
Unlike other tribute bands, several members have special links to members of the actual Beatles.
Gary Astridge, vocalist, drummer and percussionist for the group, says, "My introduction into the Beatles was watching them on 'The Ed Sullivan Show' when I was 7 years old way back in 1964."
"My parents told me the next day I was pretty much banging on all sorts of things. My father got frustrated, so he found a couple old metal coffee cans and he just cut the top and bottoms out with the plastic lid on top. They were kind of like bongos, so I guess it was sort of like my first drum set" Astridge says with a laugh. "I just wanted to play drums!
"Once I got into my 30s, I just realized, you know, I have a job, so how come I don't have a Ludwig drum set like Ringo (Starr)'s? I started doing research and found a drum kit in Pittsburgh. The guy who owned it shipped it to me and all I could think when I got it was, 'This doesn't look like Ringo's!' So I went even further with my research until I collected everything.
"My research turned into a passion. Once I collected everything, I wondered what was next, but I learned a lot, so I thought, 'Why not just put it on the internet to show everyone the knowledge I've gained?' "
This led to Astridge making his website, https://www.ringosbeatlekits.com/.
"The goal was to share my information and to also give people the blueprint for making their own Ringo drum kit," he says.
Astridge received a call in late 2012 from someone working on a Starr project involving his drums, someone who said Starr's drums were not well-documented.
"Nothing was organized. They were scurrying around on the internet trying to find information and all they kept finding was my website," he recalls. "For the longest time I never actually met him (Starr). I just met people working with him.
"Out of the six drum kits he used with the Beatles, he still had five of them. At the time I got involved, nobody knew where a lot of things were, such as his cymbal stands, cymbals, original bass drumhead and other pieces. They were planning on putting two of them on display at the Grammy Museum in Los Angeles. The condition of one of them was so bad that I offered the idea of donating the parts off my collection to Ringo to make them whole."
Starr agreed, leading Astridge to further catalog and document everything during the project.
"There was one point we had a long conversation and he thanked me for the research. He said I brought back a lot of fond memories for him," Astridge said.
John Connelly, bassist and lead vocalist for the group, had the chance to meet Sir Paul McCartney.
"He was at the Air Canada Center around five or six years ago. I'd actually attribute the whole meeting to my wife. She put me on the phone one day with someone from Platinum American Express. She starts to describe these VIP packages, which included a sound check and dinner. After that you're seated in the center section anywhere from rows 1-10. There was no guarantee McCartney was going to be at the sound check or the dinner though," Connelly says.
He went with his wife and his two daughters.
"I had my daughters dressed in these Hofner Beatles-based T-shirts," Connelly says. "I heard if you made signs and you put the request of what you want on the sign, and he saw it, he'd make good on the request. My girls had a sign that said, 'Make our dad's dream come true.' While doing the sound check, he saw the sign and said, 'Don't worry girls, put your sign away. I'm going to meet your dad after the sound check.'
"As we're walking backstage, I see him from the back on the stage thinking, 'This is really happening.'
"He's super-personable. He comes over, shakes my hand, gets down on one knee and immediately takes control of the meeting. Then he asks a little bit about me. After our conversation, he tells me, 'John, it looks like I've really touched you with my music.' Afterward, he wanted a hug. He's very dialed in with people and sensitive in terms of what matters to people." 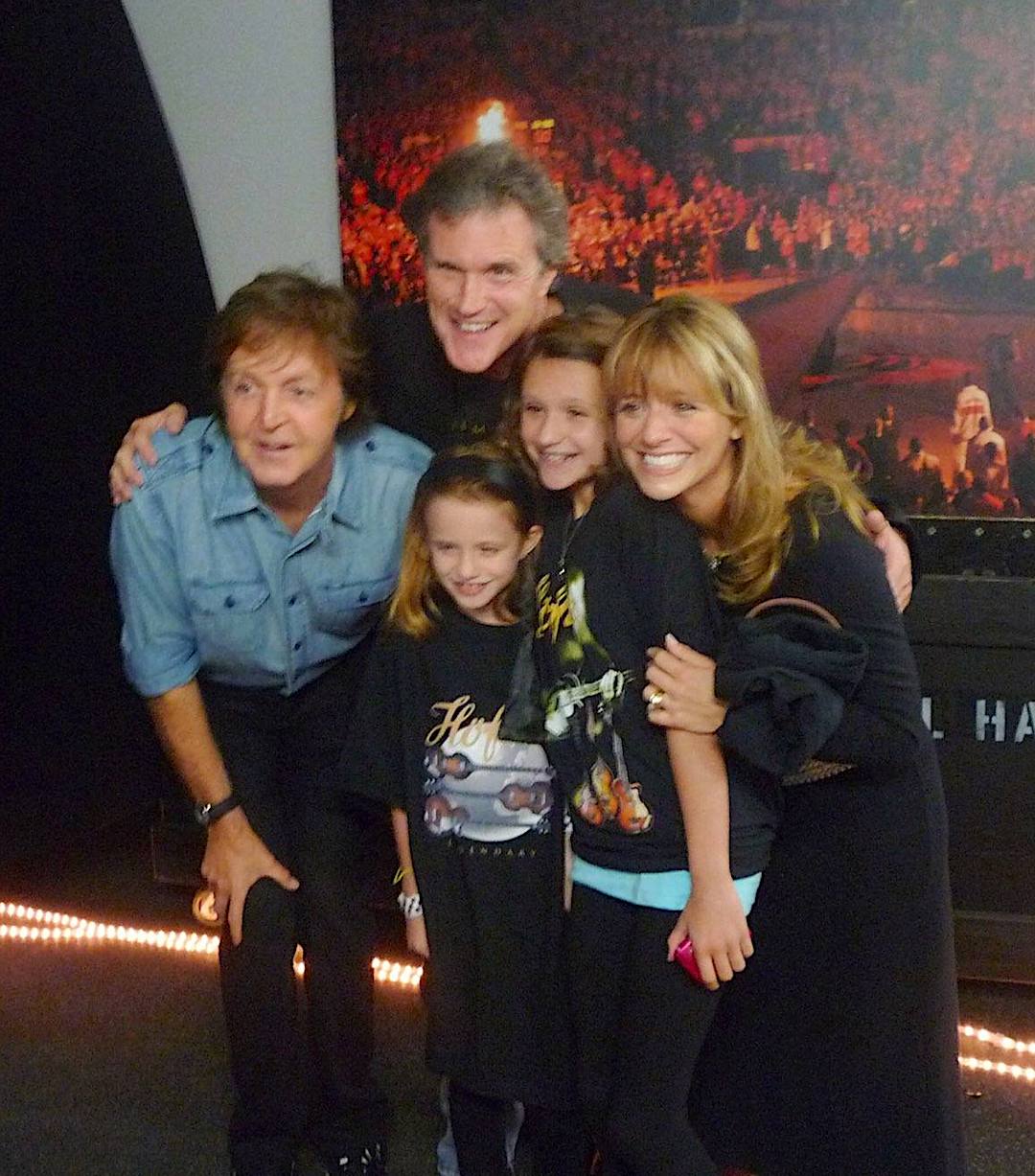 John Connelly and family meeting Sir Paul McCartney (Submitted photo).
As to what he learned from the experience, Connelly says he understands now that McCartney was born to play music: "He knows it's all about the people he's played for and the people that have bought his records. He's extremely humble.
"Everyone in life wants to do something special. If I asked you about your bucket list and you told me what was on it, I'd tell you to go after it. If someone showed me this experience beforehand and asked me what I would have paid to live it, I would have paid 10 times more than what I paid. It's not about the money, it's about the experience. We all make excuses as to why we don't want to do things, but to me, I say, 'Figure it out!'
Connelly says, "If you come to see our band live, you'll find something special. We're not only doing the music closely and accurately to the original songs, we want to connect people to another place in time. People want to hear a song the same way they heard it the first time, and we understand how important that is. We go after the exact same harmonies, bass lines, lead guitar lines ... everything - at least as close as we can get."
In addition to performing Beatles material, the BBC Band also performs songs by The Who, The Hollies and The Kinks, along with other music of the '60s.
The band is also traveling abroad to Liverpool, England, later this month.
"A guy contacted us recently and asked us if we did any marketing for the band for our Liverpool trip. We told him we had done a few things, but nothing major. So now, on Aug. 16, we're doing a free, one-hour lunchtime concert in front of Buffalo City Hall on Niagara Square in the circle. Mayor Byron Brown is going to be there and he's going to declare the day as the 'BBC Band Day.' We couldn't be any more excited" Astridge says. "Going to Liverpool is the first time we're playing out of the country. To be able to perform in hometown of the Beatles and to perform in the Cavern where the Beatles played over 300 times is just going to be an emotional experience. We're playing there a total of six times and I'll be doing three talks there."
In addition, the band is also conducting its third annual Christmas show at 8 p.m. Saturday, Dec. 8, at the Tralf, 622 Main St., Buffalo.
The BBC Band is comprised of Astridge; Connelly; Frank Grizanti on vocals, lead guitar and keyboard; Bob Volkman on vocals, keyboard, percussion and harmonica; and Russ Thomas on vocals and guitar. Thomas, incidentally, is a long-time friend of Peter Best, the Beatles' first drummer, pre-Ringo.
Find more information, visit online at http://www.thebbcband.com/index.php.
Categories
Dispatch Dispatch feature Entertainment Home feature NFP