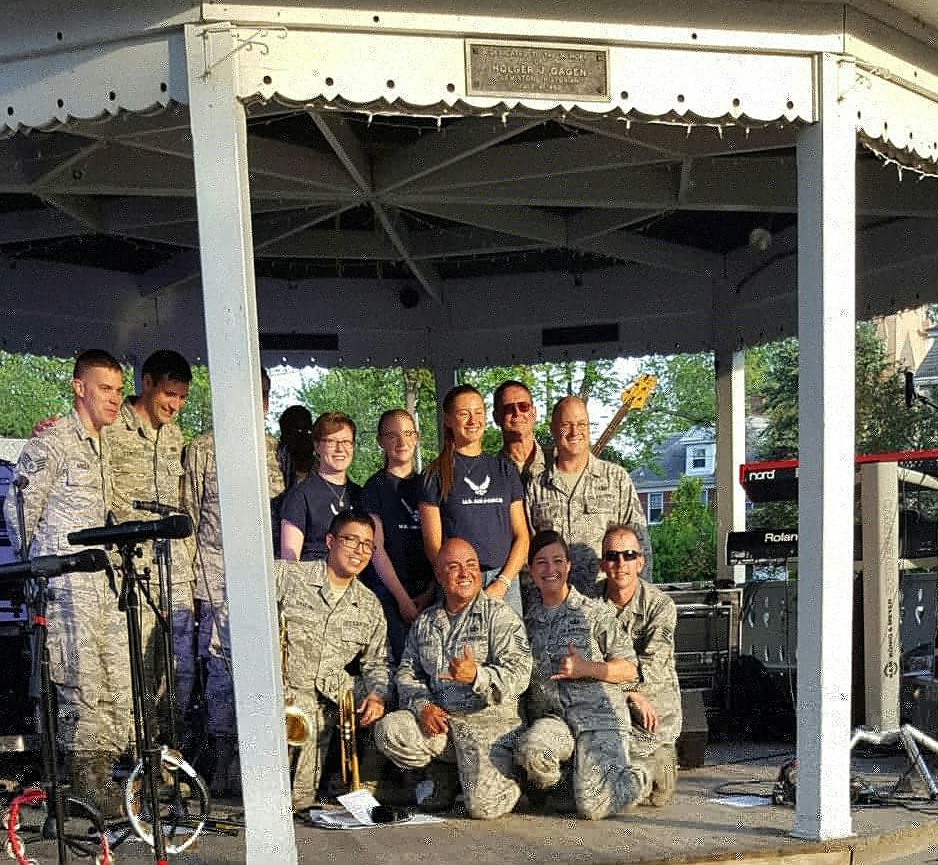 The Blue Aces Band performed Thursday in Lewiston and will play again at The Thunder of Niagara International Air Show this weekend.

Fri, Jun 8th 2018 08:30 pm
By Zackary Kephart
With beautiful, warm weather, a good-sized crowd and the perfect venue, The United States Air Force Blue Aces Band of the USAF Heritage Band couldn't have picked a better night to play at Hennepin Park in Lewiston than Thursday.
At 6 p.m., the event began, with vocalist and MSgt. Richard Vasquez Jr. leading with the national anthem.
Before the band played, 1LT Kimberly Hanley welcomed guests and reminded the crowd the band would also be playing this Saturday and Sunday as part of the 2018 Thunder Of Niagara International Air Show at the Niagara Falls Air Reserve Station.
Deputy Mayor Bruce Sutherland, a former Air Force pilot, read a proclamation before the event in honor of the Air Force's 70th anniversary.
The band kicked off its set with a roaring rendition of "Sir Duke" by Stevie Wonder, a song which was just one of many that got the audience to clap along.
Vocalists Vasquez and SSgt. Grace Huntoon made sure to get the crowd involved throughout the night.
Afterward, the Lewiston-Porter Band joined forces with the Blue Aces to bring some community flair to the event. Together, they performed electrifying performances of "Perm" by Bruno Mars, "The Middle" by Zedd, Maren Morris and Grey, and "Sorry Not Sorry" by Demi Lovato.
Once the band thanked the students, Vasquez told the crowd with a grin, "We're going to take it back a few years with this next one" before playing "Signed, Sealed, Delivered" by Stevie Wonder.
Medleys were also an important part of the event as well as a testament to the band's versatility. Vasquez said in a comment afterward that his favorite performance is when he gets to partake in the Red Hot Chili Peppers medley.
The medley, which includes some of the band's hits such as "Can't Stop," "City Of Angels," "Give It Away," "Aeroplane" and "Hump De Bump," was a burst of energy.
The band members each got their own time to shine as well, with MSgt. Kenneth Maurais delivering a riveting bass solo during "Give It Away" and A1C Michael Ferrante tearing it up on the saxophone during "Stand By Me." A1C Ryu Yamakawa showed off his electric guitar skills prior to that.
One lucky audience member got to join the band when it ripped through a Bruno Mars medley.
Vasquez told the crowd "I've seen her singing along to every song, so I had to bring her up here." He then serenaded her with Mars' "Just The Way You Are."
Like any good concert, there was also a chance for the audience to participate. "Sweet Caroline" allowed for the audience to sing back the memorable chorus to the band, with SSgt. and bandleader Ryan Rager dropping a stellar performance on the keyboard.
Vasquez also taught the audience a Hawaiian dance (Vasquez is from Honolulu), which involved the audience throwing its hands up, down, side-to-side, doing the wave, rubbing them together and then finally rubbing one hand over their bellies.
It's safe to say this was a crowd favorite.
Of course, the show wouldn't have been complete without an encore ... which was encouraged by Rager's humorous chanting of "one more song" once the final song was over.
In honor of their fellow men and women in uniform, the band members closed out the set with "God Bless America," a touching way to end the evening.
In comments afterward, TSgt. Mark Nixon, SrA John Lloyd and Ferrante said what they loved most about the evening was the crowd and its energy.
"We're just blessed to be able to come out here, play music and share our stories with you all," Nixon said.
A love for the crowd's energy was also what Vasquez loved most about the night.
Huntoon shared her love for the Village of Lewiston, commenting on how gorgeous it was, as well as being thankful for the nice weather. Like the other members, she, too, loved the crowd's energy most of all.
The crowd loved their energy even more.
For more information, visit the band on Facebook at www.facebook.com/BlueAcesRock or visit online at www.heritageofamericaband.af.mil.
The Blue Aces are:
Categories
Entertainment NFP Sentinel Sentinel HP Feature Picture