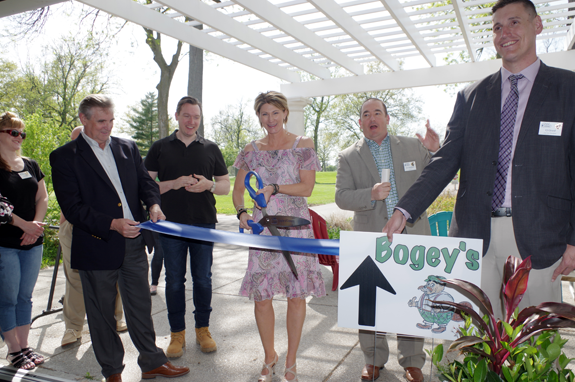 Sat, May 26th 2018 07:00 am
By Larry Austin
Island Dispatch Editor
Within a matter of weeks, Cyndy Montana of Grand Island went from candidate for town government to restaurant operator.
Soon after running for Grand Island Town Board in November, Montana responded to a request for proposal from New York State Parks to operate a restaurant at the Beaver Island Golf Course. The RFP came just six weeks before the start of the golf season.
The Grand Island Chamber of Commerce held a ribbon-cutting May 15 for Bogey's, a grill and bar at the Beaver Island Golf Course that Montana, with help from her friends and the state, has put together in a matter of weeks. The ceremony was attended by representatives of Island businesses and government.
Montana has 20 years in hospitality managing bars, restaurants and hotels, "But I never started one from scratch," she said, admitting the task was daunting.
Without Bogey's golfers at the course wouldn't have anywhere in the park to get even a bottle of water after a round.
Before she cut the ceremonial ribbon, Montana said thanked a solid foursome of help: the state, her staff, her friends, and businesses.
Montana has a lease with the State Parks and a partnership to make Bogey's a success. "It was a last-minute thing, for sure, but they have been awesome to work with," Montana said of working with the state on her restaurant.
"I've asked for so much, and everything I need, they find," Montana said of the Beaver Island Park team in particular.
She said restaurant suppliers not only sold to her, "but helped guide me, and I so appreciate that." She praised three fellow Island restaurateurs who she called a great resource: Chaz Bulera of Riverstone Grill, Mike Carr of the Village Inn, and Kevin Slachiak from Say Cheese Pizza Co. "It just shows how great Grand Island is," she said in thanking them for their for their support and guidance.
She also thanked many friends such as Barbara and Brian Chapin - "my handyman" - and a group of 12-15 young Islanders who make up her staff. The menu is kept basic and the bar is simple, "but we really want good customer service," Montana said, "and we want you to have fun. That's what we hope Bogey's will be to everyone."
Chamber President Eric Fiebelkorn said the chamber has had events, such as meetings and get-togethers, at Beaver Island, but he couldn't recall a chamber ribbon-cutting for a business in the park.
"It's a little bit different," Fiebelkorn said. "This part of the Island, if you don't come here regularly, it's kind of off the beaten path, right on the southern tip. So it's nice to bring everyone out this way and bring some attention to the park, which is really nice."
One need not be a golfer as good as Fiebelkorn to visit Bogey's, because as he said, anybody who plays knows a round is 10 percent about golf and 90 percent about everything else (eating, drinking, socializing).
"This is a really nice place to have that, and you have people running it who are just really great. I think it's a win-win for the community," Fiebelkorn said.
"When you have good owners, you know you're going to have a strong presence of hospitality and welcoming," Fiebelkorn said.
Unique to Bogey's is a retractable wall setup that makes the restaurant as close to dining on the first tee as one can get. Montana called Bogey's "very casual and fun." When the weather permits, the walls of the restaurant open to face the first tee box, expanding the seating area more than 100. Fully enclosed, there is seating for 49.
Montana previously ran two businesses on the Island. She said that while there will be stumbling blocks, the Island has her back. "When you're running a business, there's going to be difficulties and you just take that into account and you work around it."
"There's such a great support system from Islanders for Islanders," Montana said.
Bogey's hours of operation are 6:30 a.m. to dark, seven days a week.
Categories
Dispatch Food NFP Second Helping