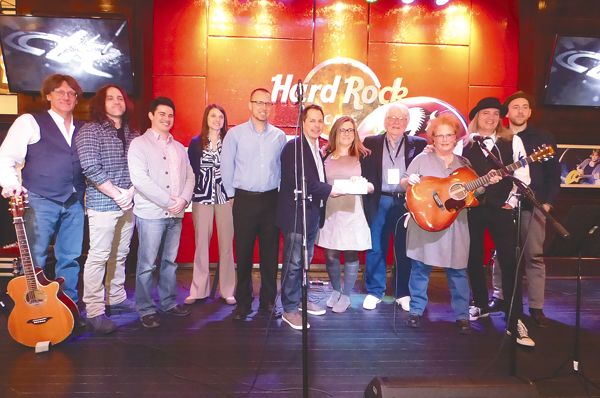 Hard Rock staffers joined with members of the Buffalo Music Hall of Fame and Veterans One-stop Center of WNY at a check presentation on Thursday.

by jmaloni
Fri, Mar 16th 2018 09:05 pm
By Joshua Maloni
Managing Editor
It was almost two years ago - as the Hard Rock Cafe, Niagara Falls USA, was celebrating its 20th anniversary - that Richard Sargent first told this news outlet of the Buffalo Music Hall of Fame's desire to bring its Musician Medics program to Niagara Falls. The local rock 'n' roll stars sought to pay it forward in the Cataract City - but there was a roadblock: funding.
That barrier was broken Thursday, as the Buffalo Music Hall of Fame was presented with a check for $5,000, courtesy of Hard Rock. The funding is the result of the cafe winning a Hard Rock Heals Foundation grant.
"With this Hard Rock Heals grant, we will be able to open up to Niagara County a lot more," Sargent said. He is the program manager and an inductee into the Buffalo Music Hall of Fame, which is located inside the Niagara Falls Hard Rock.
"Now that we've got this, we're going to be doing a lot more work in Niagara County," Sargent said. "This enables us to be able to do that. We wanted to do it; we just didn't have the budget for it. Hard Rock enables us to have the budget for it."
Hard Rock Sales and Marketing Manager Cara Turner said, "We are so thrilled and honored to be able to make this exciting announcement today. Our cafe has been in existence here in the city for 22 years. We're also very proud to house the Buffalo Music Hall of Fame room here in our cafe - going on its fifth anniversary."
Turner explained, "Hard Rock Heals Foundation is a relatively new endeavor for Hard Rock International. It exists solely to be the philanthropic arm for Hard Rock. Its sole mission is truly to support music programs - and music is healing. Obviously a true fit for us, with Buffalo Music Hall of Fame and Musician Medics program."
She presented the check to Buffalo Music Hall of Fame President Anthony Casuccio.
"Our mission is to really honor those musicians who have made an impact in the Western New York music community and beyond, but in addition to that, it's to engage those musicians to use the power of music to service the community. That's what our Musician Medics program does," he said. "I want to thank the Hard Rock, I want to thank Hard Rock Heals, for this amazing opportunity for us to expand our capacity." 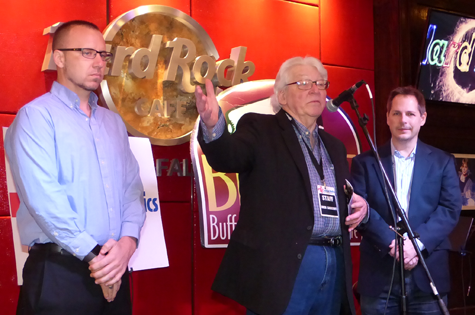 Buffalo Music Hall of Fame trustee and Musician Medics program manager Richard Sargent addresses the media as Jeff Gramlich of Veterans One-stop Center of WNY, left, and Buffalo Music Hall of Fame President Anthony Casuccio look on.
Turner said, "The criteria for the actual foundational grant is that we find a program that supports music therapy and, more importantly, healing through music therapy. When we chose the Buffalo Music Hall of Fame - as a natural fit, being that we are in regular partnership with them - their Musician Medic program is what spoke to us. What they do - going into the area hospitals, going into those health care centers and those facilities, seeing people regularly - just truly singing to them. It's shown, in cognitive behavior, how that helps."
"It truly is a noble program," she added. "All of those musicians are volunteers. They are doing it on their own time. They are driving all over the city in their own automobiles. So, anything we can do to help them."
This is the Niagara Falls restaurant's first Hard Rock Heals Foundation grant, and the top prize presented by the Orlando-based company. Less than half of the cafes (located in 68 countries) qualified for an award. 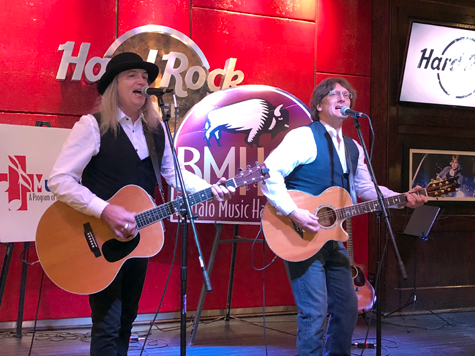 Pictured performing at Thursday's event are Geno McManus and Frank Grizanti.
Prior to the check presentation, BMHOF members Geno McManus and Frank Grizanti performed a pair of songs on the Hard Rock stage.
"What you heard from Geno and Frank is what we do in the hospitals and veterans locations we go to. We've even branched out to a few of the adult communities for Alzheimer's," Sargent said.
He added, "It's a real thrill, and sometimes it's an emotional challenge to go and see some of the kids and some of the veterans. We have World War II veterans. There's a guy (Air Force Capt. Sydney Cole) whose picture is in (the BMHOF brochure), who's 103 years old. He's a World War II hero and he loves music. We perform for him twice a month at the VA."
Musician Medics is initially partnering with the Lockport branch of Veterans One-stop Center of WNY.
"I do believe that this grant is going to go to ... people who are in need," said Jeff Gramlich, representing that agency. "It's a huge victory for not only Western New York, but Niagara County, as it's much-needed up in this county."
Sargent said Musician Medics also is eager to work with Niagara Falls Memorial Medical Center.
Businesses and individuals looking to make a donation to the BMHOF and its Musician Medics program can find more information online at www.buffalomusic.org.
The Buffalo Music Hall of Fame room is located inside the Hard Rock Cafe, Niagara Falls USA, 333 Prospect St. 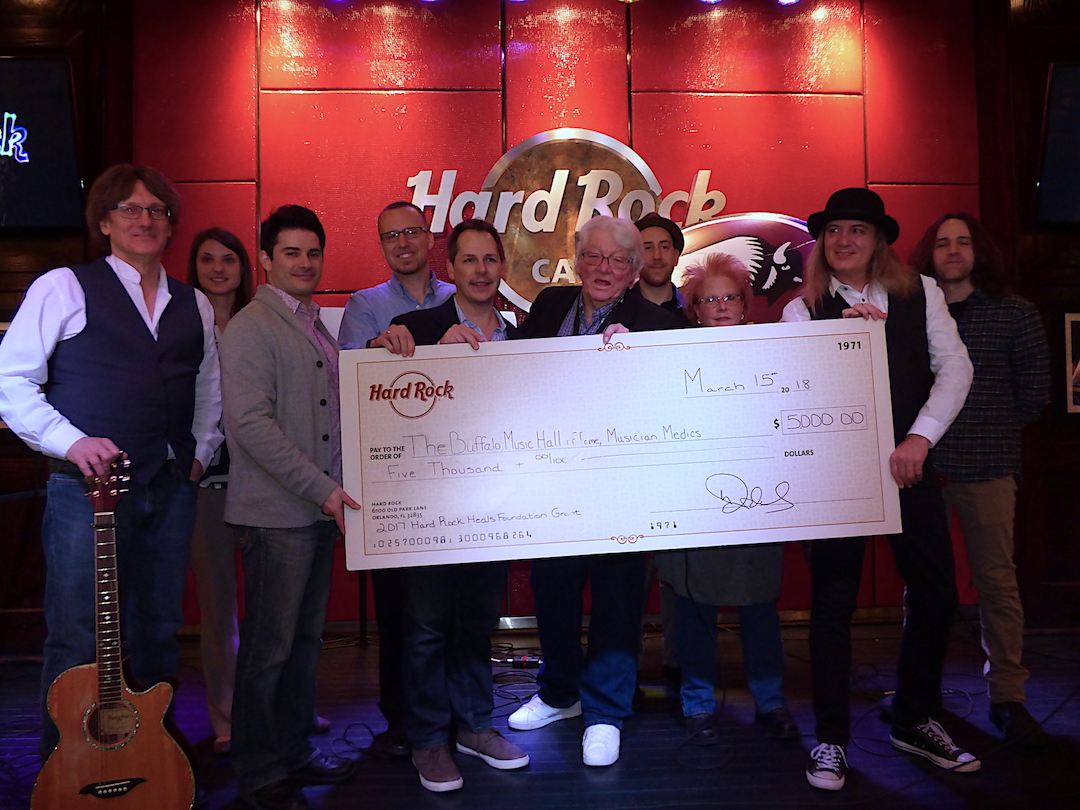