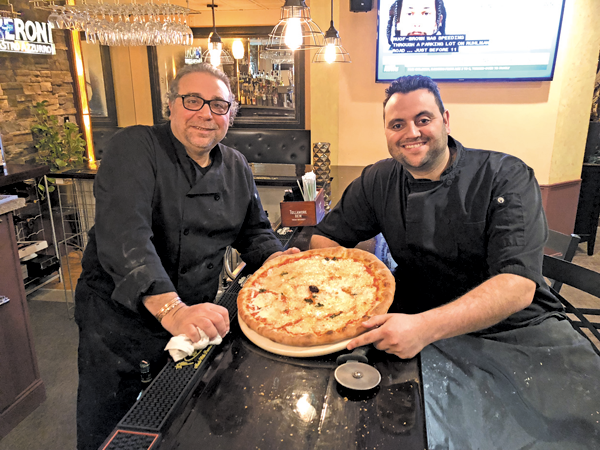 Jack and Charlie Soldano hold the margherita pizza they made from scratch at Casa Antica. The pie is fresh-made dough topped with homemade sauce, mozzarella molded from cheese curd, fresh basil and oil. The restaurant is located at 490 Center St., Lewiston.

by jmaloni
Sat, Mar 10th 2018 09:30 am
By Joshua Maloni
Managing Editor
There is a Netflix series called "Chef's Table" wherein a documentary-style team of creatives interviews and profiles the world's very best chefs.
If you've watched the remarkable culinary masters at work on "Chef's Table" - peaked into their kitchens, identified their farm-fresh ingredients and studied their dishes - you might've noticed something familiar.
Something you've seen in Lewiston.
Something you've discovered as Casa Antica.
Simply put, the head chefs inside 490 Center St. - Jack and Calogero "Charlie" Soldano - are spitting images of their more-famous peers. Like the Massimo Botturas and Nancy Silvertons of the world, they are combining elite ingredients with personal, sometimes unconventional cooking techniques to make from-scratch dishes to die for.
It's for that reason Casa Antica is well-known as a premier Italian restaurant. Menu items such as the award-winning arancini (riceball), pepperoni caldi ripieni (banana peppers), gnocchi Bolognese (meat sauce), ravioli con aragosta (lobster) and pork bracciole are crowd favorites - and each comes in a serving size requiring a take-home bag.
These dishes put Casa Antica on the radar of food aficionados, critics, celebrities and chefs who are commonly seen at the tables by the windows.
The restaurant's success enabled the father-son Soldano team, alongside Jack's daughter, Angela, and her husband, Giuseppe Bellanca, to purchase the adjoining bar once known as Hops-N-Vines.
When the new Casa Antica Lounge opened in 2017, Charlie earnestly began to incorporate something new into the gastronomic game plan.
Pizza. 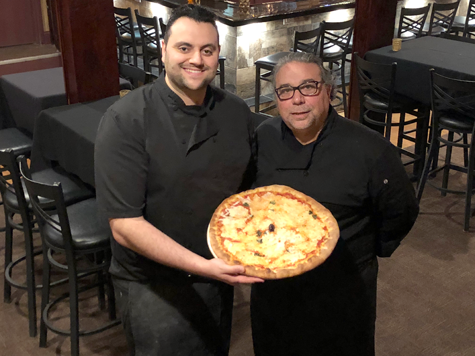 Now, it's not like Lewiston is pie-deprived. Popular pizzerias already existed on Center Street (Vincenzo's, Gallo Coal Fire Kitchen, Brio - now the Brickyard Brewing Company) and in the Cayuga Street plaza (Favorite's). It's just that Charlie is kind of pizza-obsessed.
"I've been wanting to do pizzas since we moved here in 2000," he said. "My father said we had an already-established pizzeria in Queens, New York, and he said let's push more towards the fine dining. I said, 'OK.'
"Every once in a while, I kept bringing it back up. 'Let's do pizzas.' Then, as I'd see more and more pizzerias opening up ... I said, 'We've got to do it.' "
Charlie said he respects the other pizzamakers and their individual processes. It's just that "We were raised on the pizza in New York City (where the family lived prior to coming to Lewiston), and pizza from Italy (where they visit often and still have family). We kind of knew the product and we knew the best pizza and the flavors you should be tasting," he explained.
At Casa Antica, it's "fresh, fresh, fresh," Charlie said.
On the day of this photo shoot, Jack made the crust from scratch before handing it off to Charlie, who worked the dough, seasoned it, and then stretched and molded cheese curd into mozzarella. Oil, homemade sauces and an olive topped the pie before it was placed inside a 425-degree-plus Baker's Pride lava stone oven. In less than eight minutes, the crust was charred, the pizza toppings were cooked, and the pie was ready to be devoured.
Customers, "They love it," Charlie said. "It's the closest to New York City pizza."
For Charlie, "(Pizza) was my first love: Watching my father at 5, 6, 7, 8 years old - and my mom picking me up at elementary school and dropping me off at the pizzeria - I was watching him make pizzas," Charlie said. "That was the first thing I really learned, at like 8, 9 years old, was pizza. How to make the dough and proof the dough. And sometimes I'd go in the basement with the workers to shred the cheese.
"That was always my first love - and who doesn't love pizza? I'm passionately in love with pizza." 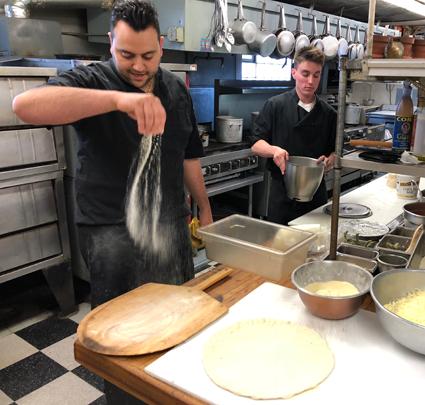 Charlie at work in the kitchen. 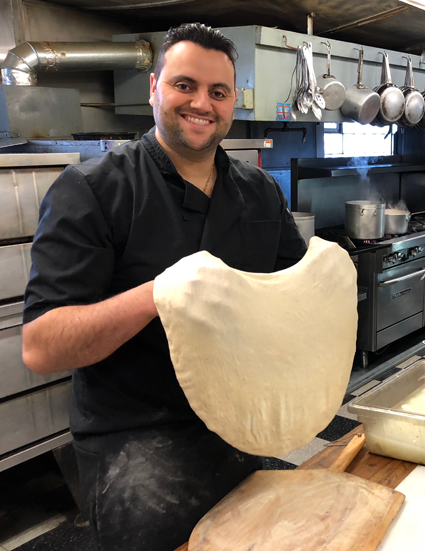 Jack said it's all about "quality cheese. Experience. Experience is No. 1. The old-fashioned way - the way our grandfathers used to do it. Today they have all these fancy ovens with conveyor belts. They don't work the same way. Everybody works with frozen dough. There's no real craftsman."
Craftsmanship, he said, is what makes Casa Antica's pizza special.
"You see any place that's original, people always look at it differently," Jack said. "They praise it differently."
Jack was making pizza in Brooklyn and in Queens in the 1970s and 1980s. He actually began in a section of Manhattan now known as Tribeca. The likes of Meryl Streep and Blondie would walk by on a regular basis.
In the 1990s, Charlie said, "I would put my little chin on the table and watch them make pizza."
Today, he's making it himself ... staying up to all hours of the night watching pizzamakers work ... swapping ideas with other chefs in Italy ... and fine-tuning his craft in Lewiston.
At Casa Antica, he offers thin-crust pizza and a half-tray Italian stagioni (four sections).
"And whatever you want on it," Charlie said. In addition to 10 everyday pie choices, customers can build their own pie with, well, whatever's in the pantry. "We've been doing any style you want."
Mozzarella di Bufala, homemade sausage, sopressetta, prosciutto, seafood, eggplant - heck, even French fries, seafood and chocolate can go on a pizza pie.
"If we have it, I'll make it, honestly," Charlie said. "I'm creative - (and) who doesn't want to call someplace that you know has good, quality products and kind of push their limits?"
"It's all about creativity. That's what you've got to love about pizza," he added. "You could do it 10 million ways, right? It's all about your imagination and your love of it. As long as you've got a good dough and good products and fresh ingredients, I say go for it."
Menu prices range from $14-$17. During winter, pies are offered each day the lounge is open, and select days in the main dining room (mainly weekends). It's suggested customers call ahead to check on availability (716-754-2581).
Tis the season at Casa Antica 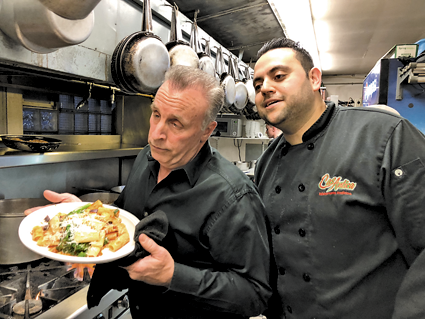 Casa Antica will once again offer up a traditional St. Joseph's Day table. Seatings will begin at 2 p.m. Sunday, March 18. Reservations are requested. Call 716-754-2581.
Casa Antica also is offering special St. Patrick's Day dishes.
Have you ever thought about trying traditional Irish food made in an Italian restaurant?
"It was wild last year. We had a great time," chef Charlie Soldano said. "If you want to have the best corned beef and cabbage, look no further."
And don't forget the soda bread. "We grew up in Queens. Half my block was Irish," Soldano said. "I know all about that."
Last weekend, comedian Vic DiBetto stopped by for dinner (and a kitchen tour) before headlining a show at the Historic Riviera Theatre in North Tonawanda. He is pictured with Soldano. 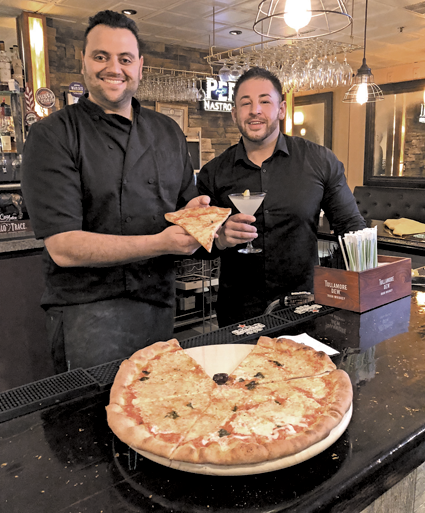