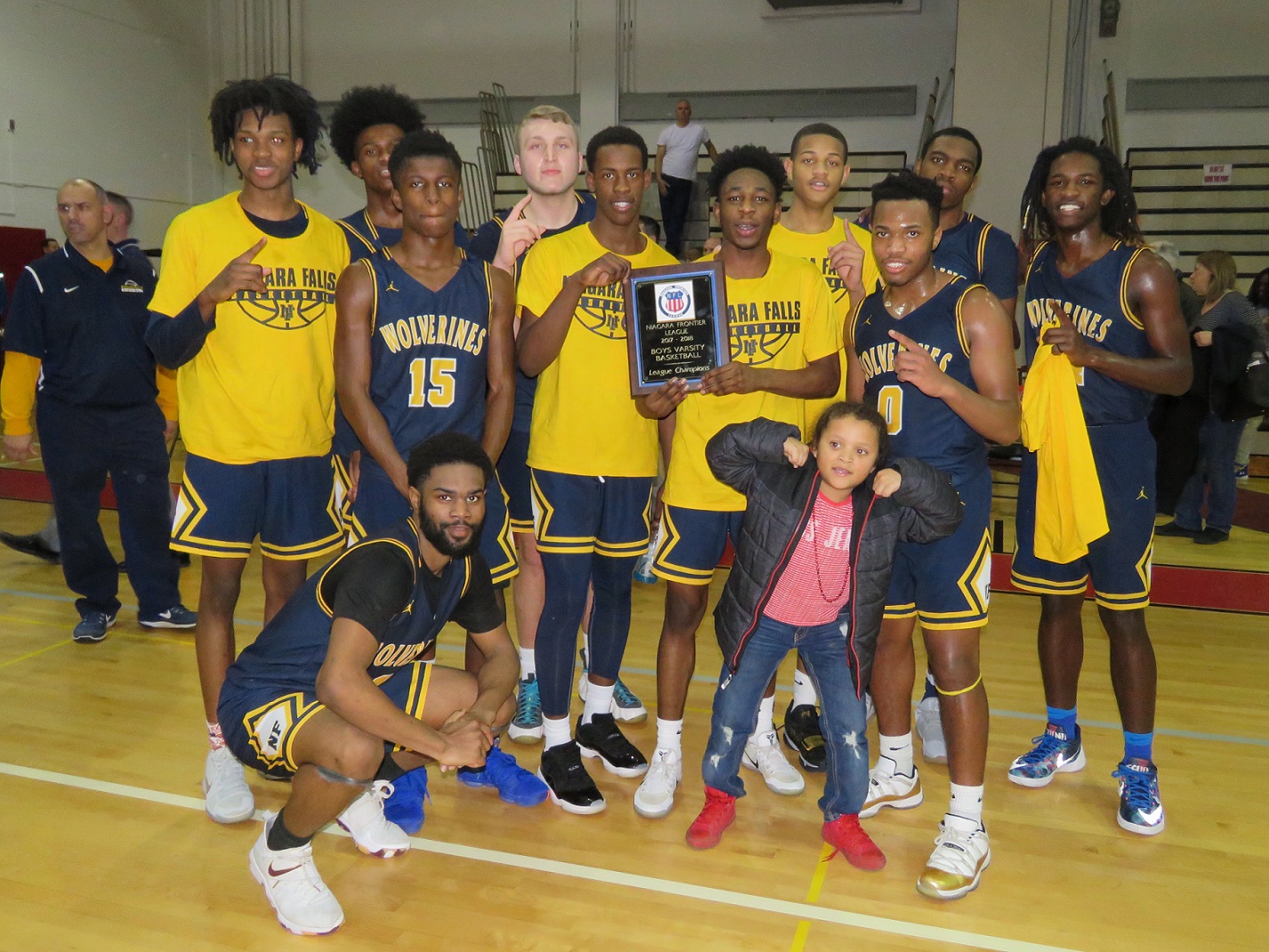 Fri, Feb 16th 2018 12:20 am
Lockport wins girls title; Gayle leads Wolverines to boys title
By David Yarger
Tribune Editor
Niagara-Wheatfield High School hosted the Niagara Frontier League basketball championships Thursday night. The games featured the Niagara and Frontier division winners going head-to-head to determine a true champion of the league.
The girls championship featured the Lockport Lions from the Niagara division and the Kenmore East Bulldogs from the Frontier division. The night rounded out with the boys championship between the Niagara Falls Wolverines of the Niagara division and the Lewiston-Porter Lancers of the Frontier division.
Lockport 47, Kenmore East 35
In the first game of the night, Lockport came out of the gate strong defensively and never trailed.
The Lions made life difficult for the Bulldogs, as almost every shot Ken-East took was contested and sometimes blocked.
Elizabeth Mullane led the Lions in the first quarter with 6 points and helped Lockport hold a 13-10 lead after one.
In the second quarter, Ashlynn Johnson scored 6 points off two 3-pointers to help extend the Lions lead as high as 11. The Bulldogs continued to stay close, though, as they trailed by 7 at the half, 25-18.
In the third quarter, Kenmore East began by sinking two buckets to cut the lead to 3.
Lockport didn't make their first field of the half until 2:35 left in the third quarter, but the bucket by Daizha Webb extended the lead to 6. Following a Bulldogs bucket, Johnson then added another trey, and the Lions went into the fourth quarter leading, 32-25.
In the fourth quarter, Webb and Johnson nailed back to back 3-pointers to extend the lead to 9. Lockport eventually sealed the game on the free throw line, draining seven free throws.
For the Bulldogs, Carianne McCarthy led the team with a game-high 14 points, while Serena Sordetto and Lexi Lagattuta added 10 and 7, respectively.
For the NFL champion Lions, Webb and Johnson each led the team with 13 points, while Mullane added 9.
Also, the title returns to Lockport after the Lions split the crown with Kenmore West in 2015-16.
The teams sectional opponents are still to be determined after the Section VI seeding meeting on Saturday. 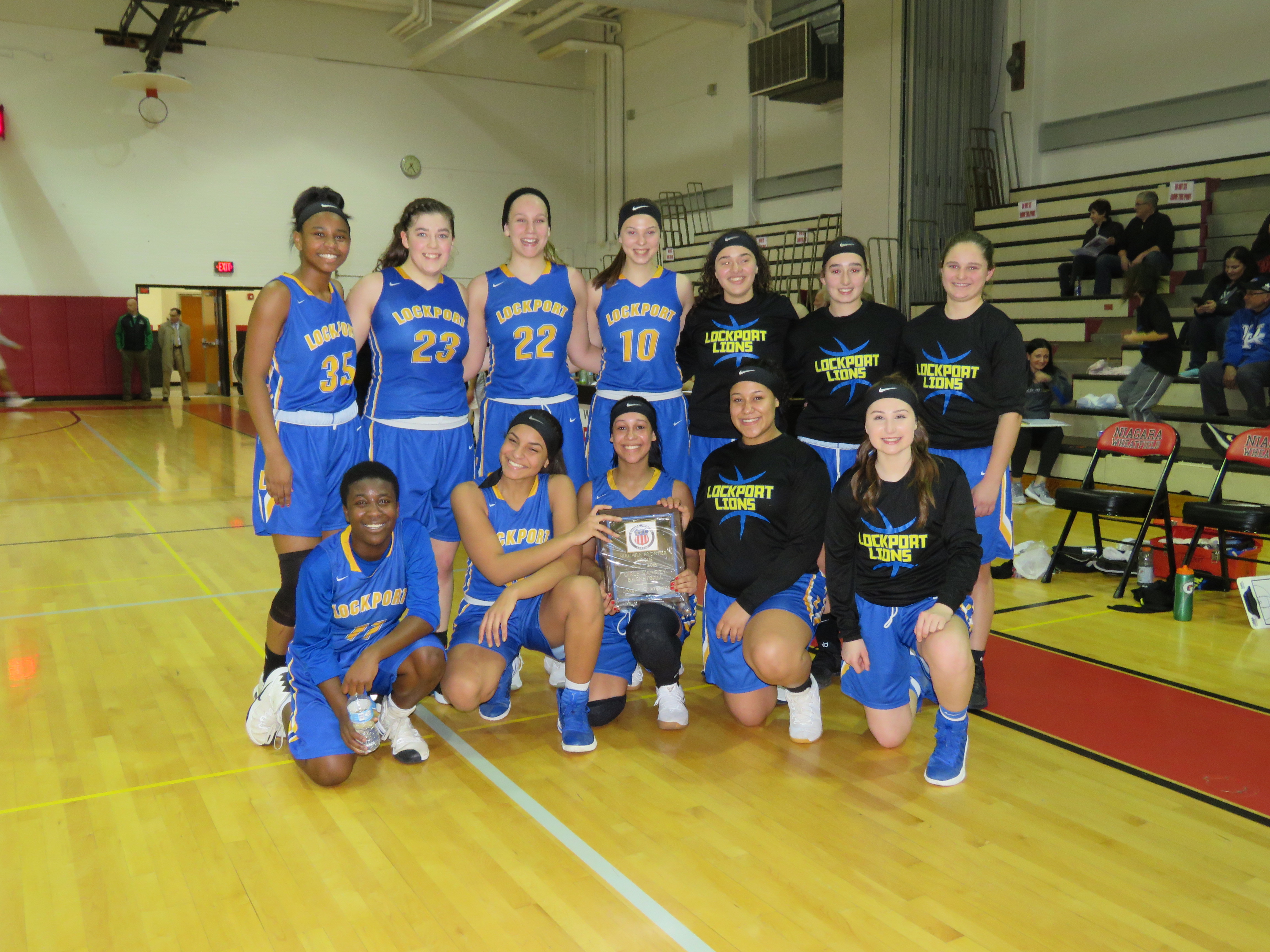 The Lockport girls basketball team poses with their Niagara Frontier League championship plaque. (Photo by David Yarger)
Niagara Falls 76, Lewiston-Porter 46
The Niagara Falls Wolverines were dominant Thursday night, as they cruised to a Niagara Frontier League title win over Lewiston-Porter, 76-46.
The Wolverines got up 9-0 before Zach Clayborne nailed the first field goal for the Lancers. With the score 9-2, the Falls closed the quarter on a 14-5 run, highlighted by 10 Roddy Gayle points.
In the second quarter, the Wolverines didn't let up, as Tazaun Rose, Moran Montgomery and Willie Lightfoot each had 4 points in the quarter. At halftime, Niagara Falls led 37-16.
Out of the break at halftime, the Lancers began to show signs of a comeback, as they went on a 10-0 run to start the third quarter. The run cut the Wolverines lead to 11, and that's as close as the Lancers would come.
Gayle scored the next 7 points for the Wolverines, capped off by a high-flying alley-oop dunk that got the Niagara-Wheatfield gym rocking.
The 10-0 Lancers run was countered by an 11-0 Wolverines run to extend the lead to 22.
The second half was very physical, as both teams were in each other's faces several times. Both teams were able to stay composed, though, as an ejection would've resulted in a one game suspension, and the next game for both teams are sectional playoff games.
In the fourth quarter, Josiah Harris scored 13 of his 16 points, including four 3-pointers, three being consecutively.
For the Lancers, Will Duff scored 6 of his team high 10 in the fourth quarter. The loss dropped the team's final league record to 8-5.
For the Wolverines, it's their 15th NFL title since 2000. Niagara Falls coach Sal Constantino was happy for his players completing an undefeated (13-0) league season, but said he's focused for the next game in the playoffs.
"For the kids it means a lot. They're excited and stuff ... first time ever we've done the crossover championship game. They get a plaque at the end, it's big for them. For me, I keep telling these guys, 'Today was the biggest game of the year until the next game.' Friday night will be the biggest game of the year," Constantino said.
As the game got close in the third quarter, Constantino called a timeout and he said it was strictly for composure.
"I just wanted to tell our guys to keep their cool. Obviously, I think at one point they realized we were the better team and I'm gonna politely call it physical play ... there were some bad things going on out there. I just wanted our guys to keep their heads and we don't wanna get tossed out of a game and end up missing the next game," Constantino said.
The eighth-grader Gayle led the Wolverines with 21 points. Gayle performed on the big stage Thursday night, but Constantino said he's looking for that output almost every night from the young Wolverine.
For the Lancers, coach Matt Bradshaw gave credit to the Wolverines, especially Gayle.
"They're a good team. Roddy Gayle is a phenom. Not only does Roddy Gayle have the talent but he's a hard worker. He's on the floor; I got a lot of respect for that kid. ... He works as hard as anybody on that floor," Bradshaw said.
After a tough loss, Bradshaw made sure to keep the confidence up in the locker room heading to sectionals.
"We played hard. ... We can control our effort and our effort is good. We're sitting good. I'm very confident going into the game against Lake Shore. They're a very good team, but they're a four seed and we're a five seed for a reason. So, were pretty well matched.
"Playing in the Niagara Frontier League as one of the smallest schools in the league it's great for us come sectional time," Bradshaw said.
The Lancers are slated to play Lake Shore in the quarterfinals of the Section VI Class A2 playoffs, but a time and location will be decided on Saturday at the Section VI seeding meeting.
For the Wolverines, they are locked in as the No. 1 seed in Class AA. They are tentatively slated to host the winner of the No. 8 versus No. 9 seed game. Game times are still to be determined.
Categories
School feature Sentinel Sports feature Tribune