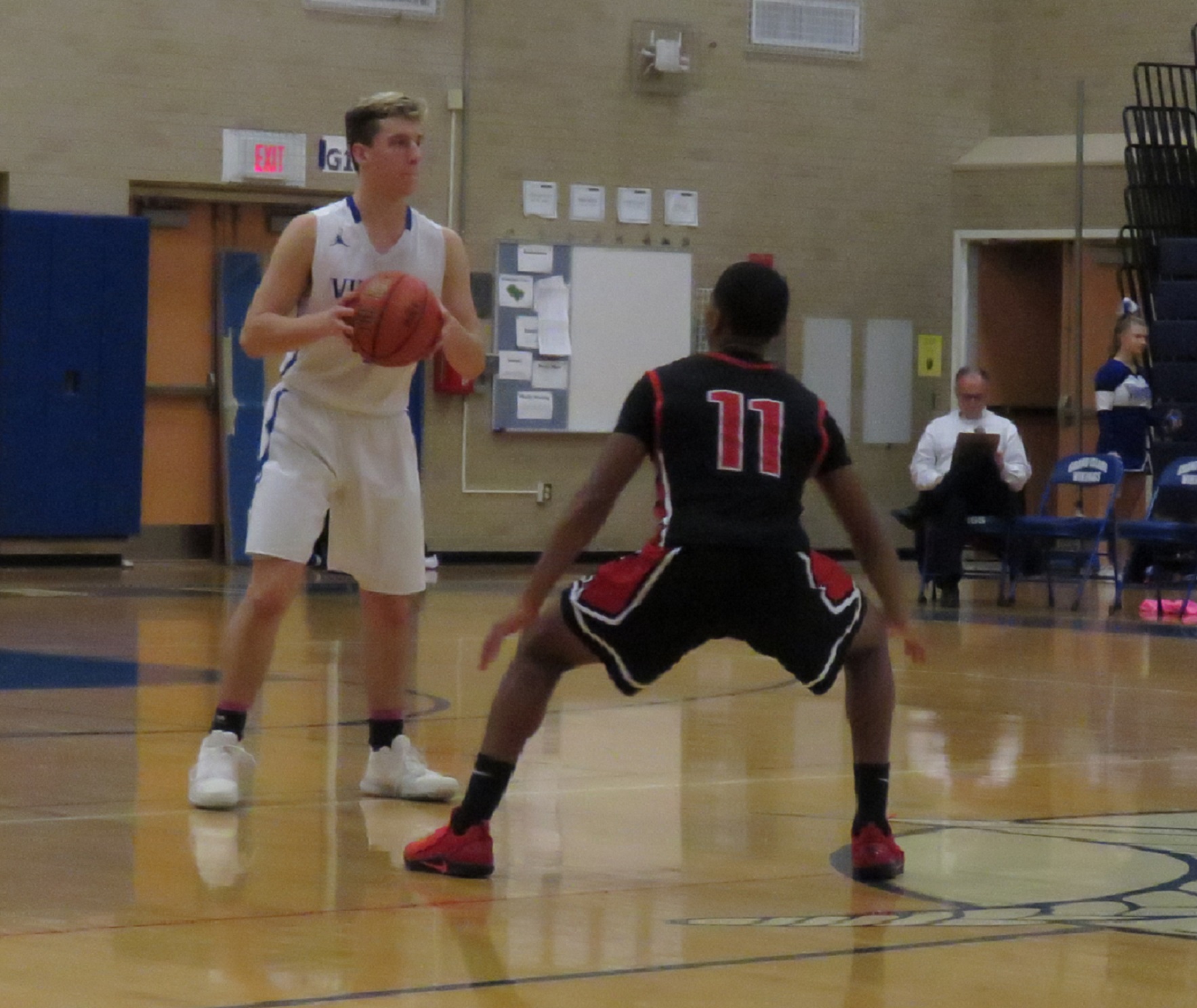 Thu, Feb 8th 2018 12:35 am
Vikings hold Falcons to 30 points; 15 in each half
By David Yarger
Tribune Editor
Grand Island coach Ron Krysztof will tell anyone his team's ability to shoot the 3-pointer is critical. Wednesday night versus Niagara-Wheatfield, they only made six, a little below their season average, but all six came at key times to spark a Vikings win.
The Vikings defeated the Falcons 51-30 Wednesday night for their second consecutive win.
The game was also the second consecutive one for Vikings senior forward Liam Carey, who returned from a recent injury on Tuesday night.
Krysztof praised Carey and said his team has a different face with him on the court.
"We started off 5-1-1 with him, I give us that one (at the end) because he missed a lot of the Wilson game because he hurt his shoulder. Then, I think we went 2-7 without him; he missed nine games. Then, he comes back; we win our first two. ... I try to explain to people, he was averaging 17 (points) and 17 (rebounds), but him just being out on the court makes us better.
"He moves the ball, ... he rebounds very well, he comes over and blocks shots or affects shots. He does a lot of little things. He's our press breaker ... so, it's not even about scoring, it's all the things he does on the court. It just makes us a better team," Krysztof said.
Carey, who's currently playing on a 10-15 minute restriction, had 4 points on the night and was all over the court offensively and defensively.
Carey was also key in creating open 3-pointers for Cam Sionko and Derek Callen, who combined for 24 of the Vikings 51 points.
The first quarter didn't start well for Grand Island, as the Vikings converted just two field goals.
Anthony Ruffino led the Falcons in the first quarter with 5 points, and N-W led after one quarter, 7-4.
In the second quarter, the Vikings began to show their shooting ability. Down 11-8, the Vikings embarked on a 13-0 run, highlighted by 8 Sionko points, including back-to-back 3-pointers to give the Vikings the lead. After two quarters, the Vikings led, 21-15.
In the third quarter, the Falcons fought back behind Davon Ware's 7 quarter points. James McVay also added 4 in the quarter.
The Vikings continued to shoot the long ball, though, as Callen and Sionko each drained 3-pointers. The Vikings led after three quarters, 31-26.
In the fourth quarter, Grand Island began to put the game on ice. With a 31-28 lead, Jason Messing made a jump shot and then Sionko drilled his final trey of the night, which sparked a 20-2 run to seal the deal.
After a rough offensive first quarter, Kyrsztof said he adjusted the offense from a spread to more of a 41, which put Carey at the high post, giving him the ability to attack the rim or pass the ball to open shooters, which he did numerous times the remainder of the game.
"It was Cam or Derek kept getting a lot of passes and hit a couple of big shots off the reversal pass, which was huge for us," Krysztof said.
Krysztof added that fatigue was seen throughout the game with turnovers, as both teams played the day before.
For the Falcons, frustration continues to mount, as Wednesday night's loss is their eighth consecutive loss. Coach Erik O'Bryan was blunt after the lackluster offensive performance.
"Grand Island played well defensively, but we have not had any ounce of chemistry in our offense in about five or six games. Not an ounce of it. And you can tell," O'Bryan said.
O'Bryan did think the score didn't reflect the outcome of the game, as the team had the GI lead cut to three at one point, but second chance opportunities is what did the Falcons in.
O'Bryan said the team must weather the storm, as they play again at 6:30 p.m. tomorrow versus Kenmore East.
"We played well defensively for three quarters. We had some fight in us tonight, so it's something to build off of. ... We haven't had fight in weeks and I actually felt like I was on the sidelines fighting with them today. ... There's no drawing board at this point in the season and we can't reinvent the wheel right now, so either the kids gotta buy in and get some chemistry or were gonna go down blaming each other," O'Bryan said.
Ware led the Falcons with 9 points, while Ruffino and McVay added 7 apiece.
For the Vikings, it's their first time with consecutive wins in two weeks and Krysztof said he wants to take the confidence the team has now and use it to finish the year strong.
"We have a chance to move up in the sectionals now, ... but now, what we have; we want to try and get a home game on that Wednesday before we have to go to Friday for the quarterfinals. So, being at home would be huge.
"If we could get one of the next two games, I think that'll afford us a home game. Now it's just getting into good position to play a couple sectional games," Krysztof said.
Sionko led the Vikings with 16 points, while Messing and Callen chipped in 9 and 8 points, respectively. Their next game is senior night at 6:30 p.m. Friday versus CSAT.
Categories
Dispatch School School feature Sports Sports feature Tribune