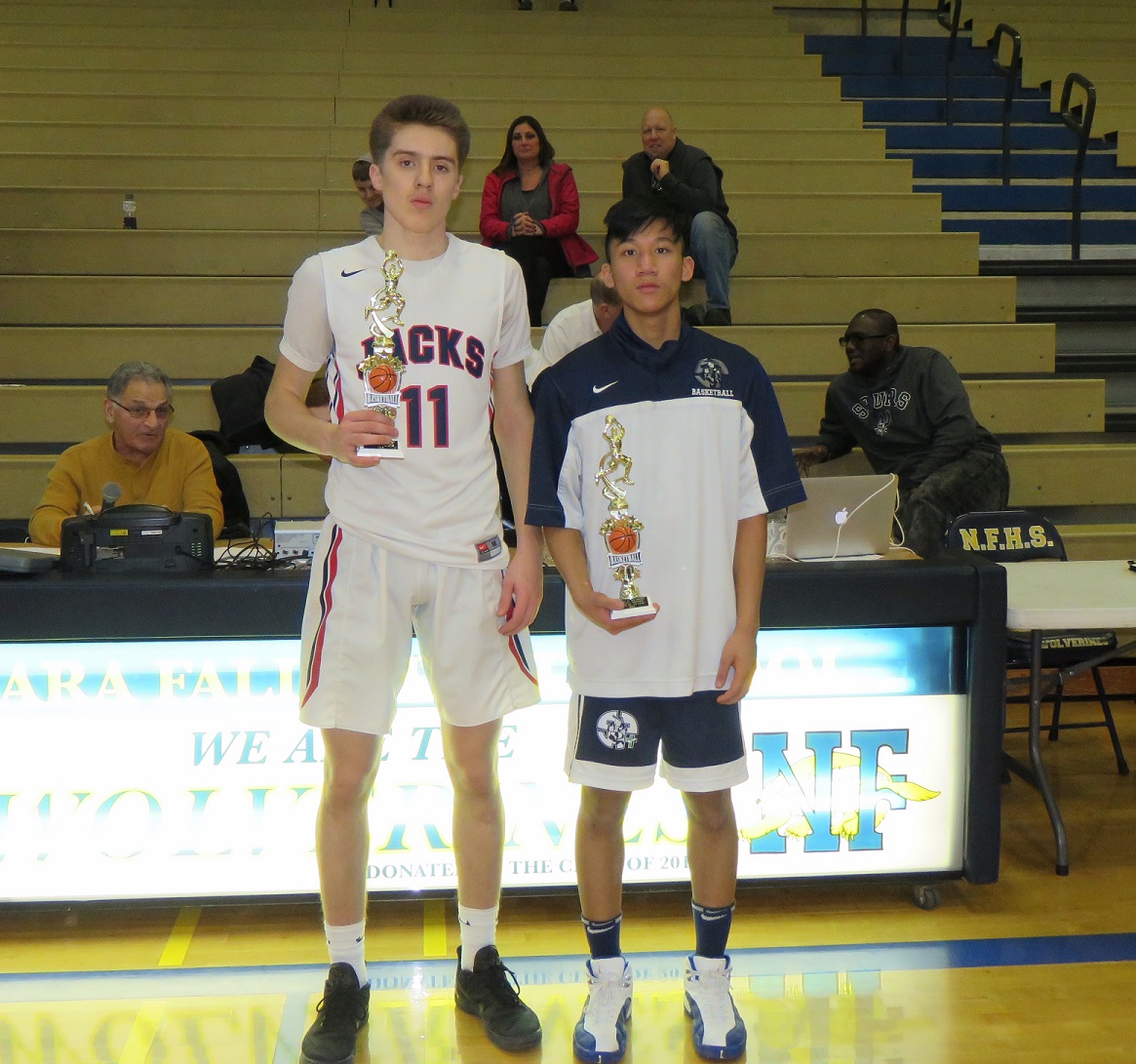 Players of the game from North Tonawanda versus St. Paul. Left, Trevor Book of NT and Jerwyn Tutanes of St. Paul. (Photo by David Yarger)

HS Hoops: Battle of the Border games come down to wire

Sun, Feb 4th 2018 12:30 am
Three of four games end with single-digit differentials
By David Yarger
Tribune Editor
For the third year in a row, the Battle of the Border brought talent from north of the border in Ontario to Niagara Falls High School to face off against some of the best that Western New York has to offer. Although only three Canadian teams played in this year's classic, the players from Canada represented their side of the border well, winning two of the three games. There were also some familiar faces from last year's battle who returned to the Wolvarena for another bought with an American high school. Here is a full recap from the action on Saturday.
Aquinas Institute 59, St. Francis (Ont.) 42
The first game of the classic was the only one that didn't come down to the final seconds. St. Francis returned last year's player of the game, Jack Riddell, along with Sam Braithwaite. Riddell had his way from behind the 3-point line last year, but this year he was held to just 7 points in a losing cause.
St. Francis led at halftime 23-21, but Aquinas used a big 20-4 run in the third quarter to take and extend their lead. Steven Mahar played a big part in the Lil Irish's comeback, as he won player of the game honors with 11 points and 7 rebounds.
For St. Francis, the 3-ball was unsuccessful compared to last year's performance. Tyrell MacLennan was awarded player of the game with 9 points and 8 rebounds. 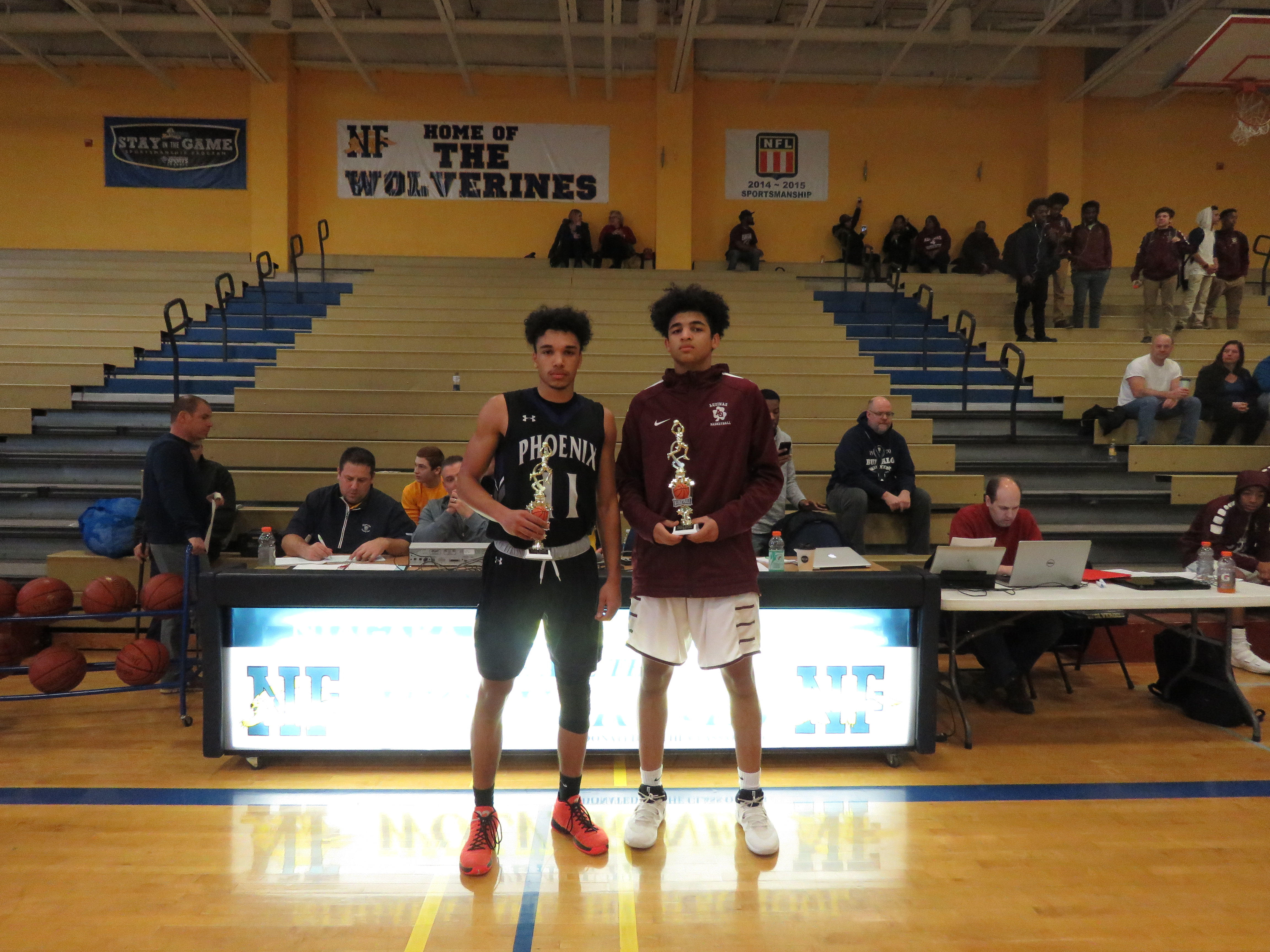 Players of the game: left, Tyrell MacLennan of St. Francis and Steven Mahar of Aquinas. (Photo by David Yarger)
St. Paul 55, North Tonawanda 54
The second game of the BOTB was one of the most thrilling, as North Tonawanda saw their comeback bid fall just short versus St. Paul. The Patriots led most of the game, including a lead as high as 15 points before halftime.
North Tonawanda made their run in the third quarter, as Dante Moultrie scored the first 10 points of the second quarter for the Jacks. NT went on to win the quarter, 19-8, and trailed after three, 40-39.
Walter Wisniewski gave the Jacks their first lead, as he drained a 3-pointer to start the fourth quarter, which Trevor Book followed with a jump shot to give NT a 4-point lead.
The Patriots came back, though, as Will Schmahl gave St. Paul the lead back, then player of the game Jerwyn Tutanes drilled a trey to make it 48-45.
With the score 50-49, Sean Ferry drained a 3-ball to give the Jacks a 52-50 lead.
The lead didn't last long, though, as Tutanes nailed a trey to answer right back.
After two Book free throws, last year's player of the game for St. Paul, Victor Kariuki, put the game on ice with a driving layup to win it, 55-54.
For the Patriots, Tutanes led with 25, Kariuki had 15 and Schmahl added 13.
For the Jacks, Book was awarded player of the game with a game-high 26 points, while Moultrie added 13.
St. Joes 73, Lake Shore 66
In the lone game between two American teams, the squads followed the NT-St. Paul thriller perfectly. The game featured back-and-forth action along with a few slam dunks thrown in.
Lake Shore led for majority of the game, as they were led by big man Jon Park, who won player of the game for the Eagles with a game-high 28 points.
Park brought the house down in the fourth quarter, as Jay Brueckl drove to the hoop on a fast break, saw Park coming from behind and threw a pass of the backboard, which Park caught and slammed home, sending the BOTB attendees into a frenzy.
Unfortunately for the Eagles, their fun didn't last much longer.
With the score 64-58, in favor of Lake Shore, St. Joes embarked on a 13-0 run, highlighted by a Kevin Durkin 3-ball to give the Marauders the lead and then a Jack Capen layup to help extend the lead. The Eagles had no answer for the Marauders run.
Along with Park, Josh Buchanan had 16 points and Brueckl added 15.
For the Marauders, Capen won player of the game honors with 20 points, while Durkin added 15 points. Also, Will Ostrowski and Trey Boling chipped in 11 and 10 points, respectively. 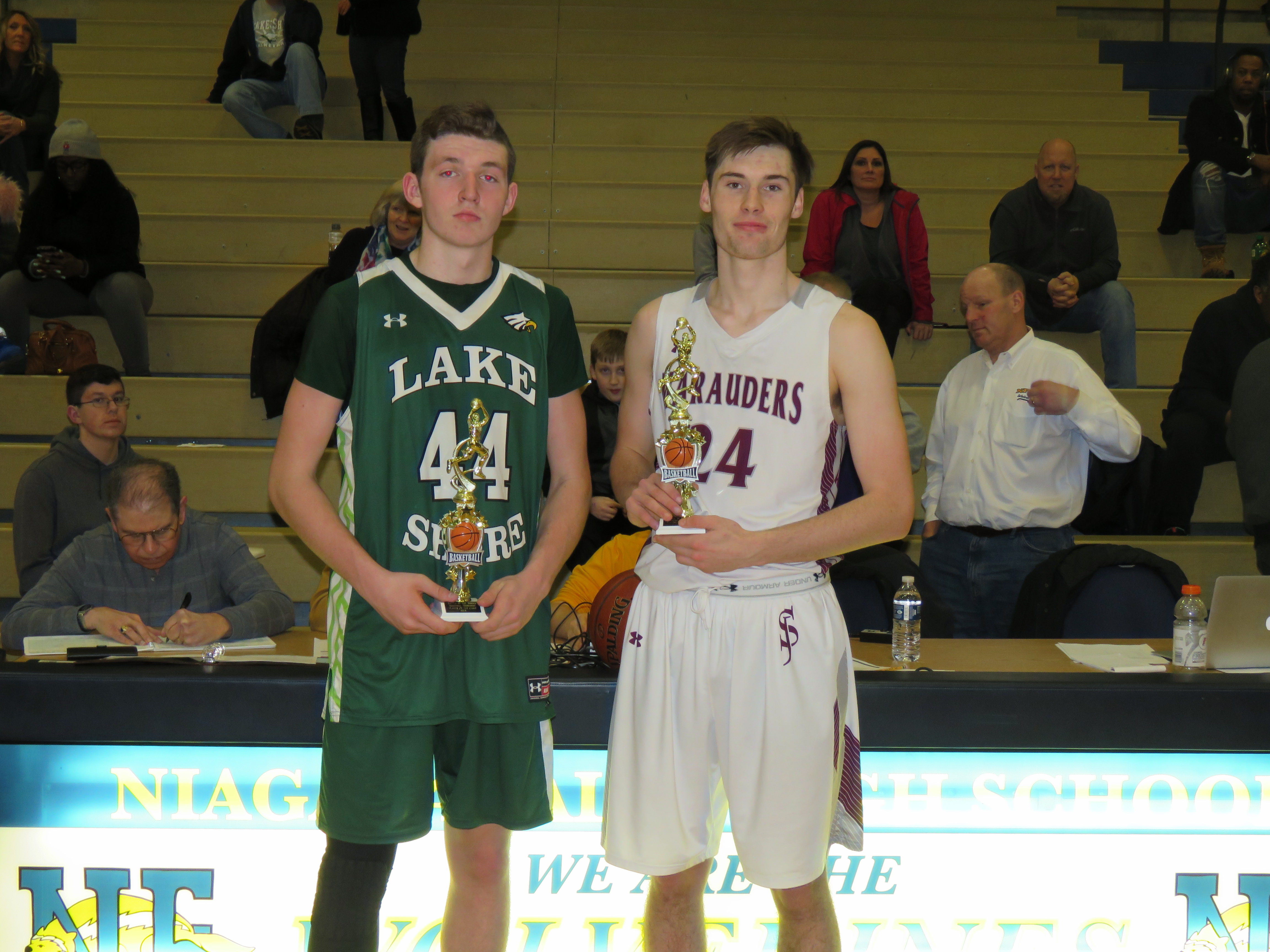 Players of the game: left, Jon Park of Lake Shore and Jack Capen of St. Joes. (Photo by David Yarger)
St. Michaels (Toronto) 50, Niagara Falls 49
In the final game of the BOTB, St. Michaels from Toronto traveled to Niagara Falls for a rematch against the Wolverines. The Falls won the first matchup up in Toronto, and St. Michaels was looking for revenge Saturday night.
The Blue Raiders got off to a hot start, as Aleer Aleer-Leek had 8 points in the first quarter, including a 3-pointer at to beat the buzzer. The team led 17-12 after one.
After the Falls tied the score at 19 with a Roddy Gayle layup, the Blue Raiders went on a 11-0 run, capped off by a Kyle Duke-Simpson 3-pointer. St. Michaels went into halftime leading 32-22.
The Wolverines didn't go down without a fight though, as eighth-grader Willie Lightfoot's 6 points drew the Falls a little closer. Josiah Harris also hit his first trey of the night, but Rory Stewart answered for the Blue Raiders and St. Michaels led 43-37 after three quarters.
Quran Dubois stole an inbounds pass for the Wolverines and layed it up and in to cut the Blue Raiders lead to 1. Harris followed that with his third 3-pointer to give the Wolverines their first lead since it was 3-0.
The Blue Raiders scored the next 5 points, though, as Nana Akuamoah-Boateng sank a shot and then Aleer-Leek drained another 3-pointer to give St. Michaels a 50-47 lead.
Gayle sunk two free throws to make 50-49 and the Wolverines had an opportunity to score with little time left, but NF was unable to get a good shot off, resulting in the end of the game.
For the Wolverines, Harris won player of the game with his big 9 points off three 3-pointers. Gayle led the way with 11 points.
For the Blue Raiders, Aleer-Leek led with 13 and Akuamoah-Boateng chipped in 11 points. 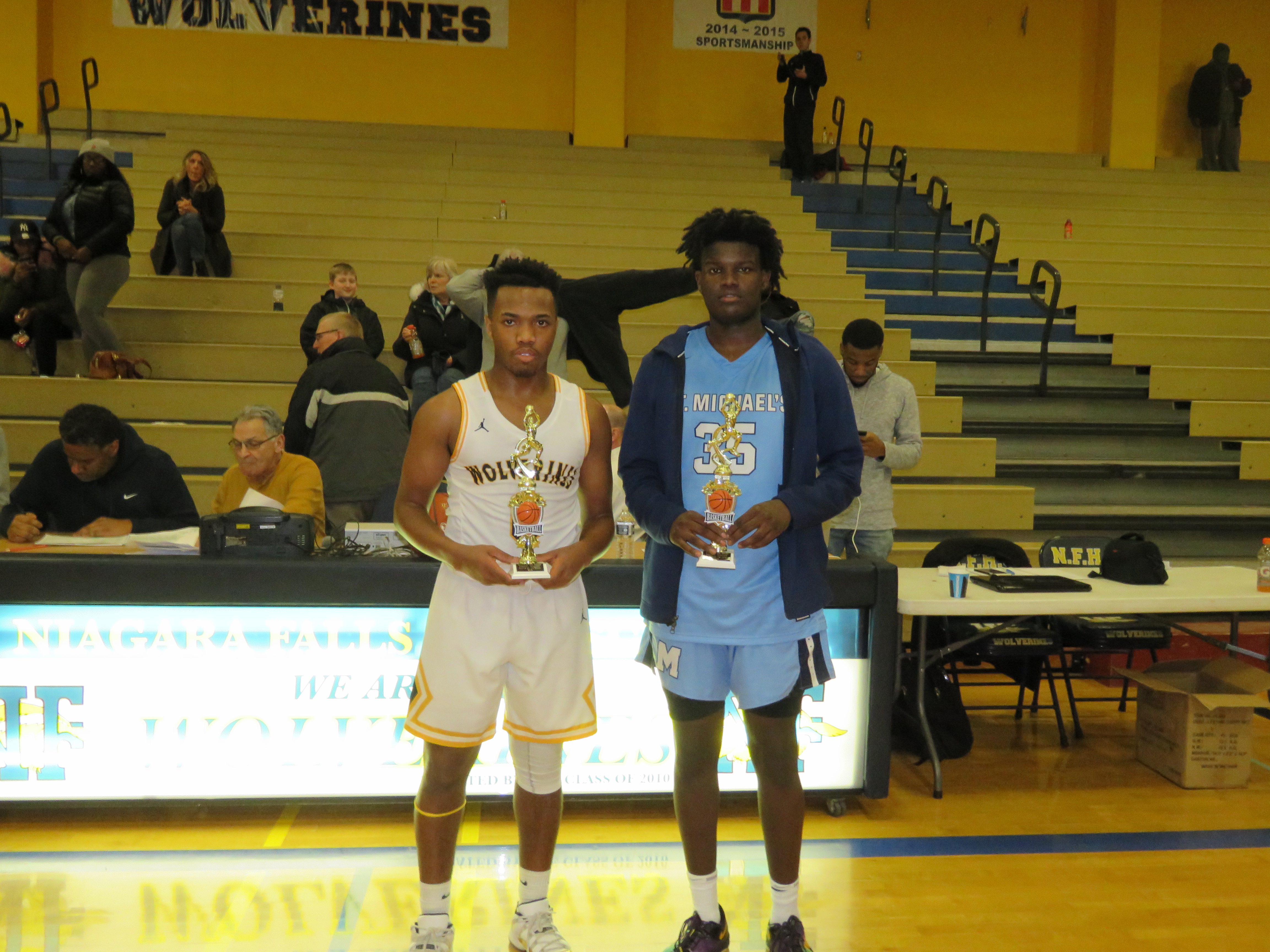 Players of the game: left, Josiah Harris of Niagara Falls and Aleer Aleer-Leek of St. Michaels. (Photo by David Yarger)
In the end, the BOTB drew fans from local and afar and no fan was left disappointed by the action. The third straight year of the classic lived up to its billing and showcased some of the best local talent and talent just a few miles north of the border.
Categories
NFP School Sports Sports feature Top News Features