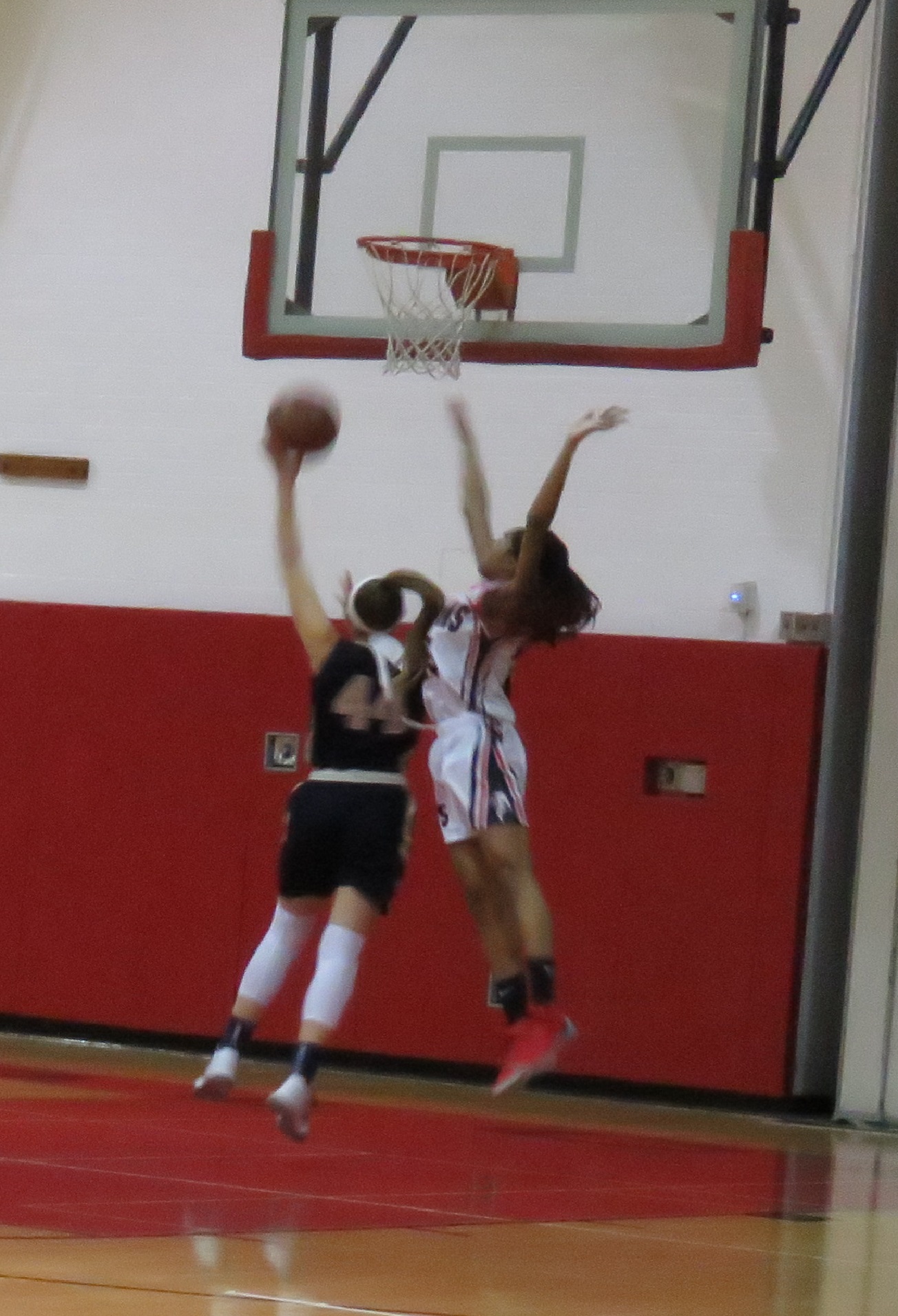 Mon, Jan 29th 2018 11:20 pm
Two Falcons' guards combine for six 3-pointers in win
By David Yarger
Tribune Editor
In basketball they say you live and die by the 3-pointer. Niagara-Wheatfield's girls basketball team didn't necessarily live or die by it Monday night versus Kenmore East, but when they made them, they were in big spots.
The Falcons defeated the Kenmore East Bulldogs, 60-50, Monday night at Niagara-Wheatfield. It was the first time the two teams met all season.
Originally, Niagara-Wheatfield looked like they'd pull far away from the Bulldogs, but Kenmore East continued to fight and claw their way into the Falcons lead, eventually cutting it to 9 points late. The Falcons' lead reached as high as 23 points.
In the first quarter, Jenna Bailey got the offense started, drilling back-to-back 3-pointers for the team's first field goals of the game. Following a basket by Brianna Zayatz, Taylor Benton nailed her first 3-pointer and quickly extended the lead, 12-3. The Falcons won the quarter, 16-9.
In the second quarter, Benton and Bailey continued to extend the lead, as they combined for 8 of the 15 points in the quarter. The Falcons defense also caused chaos for the Bulldogs, as N-W went into the half up 31-13.
In the third quarter, the Bulldogs seemed to make adjustments. Serena Sordetto did it all for Ken-East, as her 11 points in the quarter cut the lead to 12 at the end of the third quarter. Sordetto finished the game with a game high 27 points, including five 3-pointers.
For the Falcons, Bailey hit two more 3-pointers in the third, but turnovers were a key in the Bulldogs comeback.
Coming out of the third quarter break up 42-30, Bailey nailed her third 3-pointer of the game, extending the lead back to 15.
The Bulldogs constantly answered, though, as Sordetto and Alexis Lagattuta made shots down the stretch.
Kelsey Lachowski split a pair of free throws near the end to make it 60-50, and after a missed 3-pointer by East, that was it.
For the Falcons, Benton led the way with 19, while Bailey added 15. Coach Gary Jackson said the two's ability to shoot the long ball plays a key in the Falcons offense.
"When you have a tenth-grader in Jenna Bailey, who has no fear whatsoever; I gave her the green light. I told her 'Just shoot.' She could miss three in-a-row and still shoot and start dropping them.
"What happens then is Taylor is on the opposite side and it opens it up for Taylor. When it opens up for Taylor, then it opens it up down in the paint for LeGary (Jackson). So with them opening up the defense, it allows other people to score. ... Even if they miss, it gives LeGary a one-on-one where she can beat anyone in this league in a rebound one-on-one. ... It is big to have them shooting," Jackson said.
Jackson gave credit to the comeback of Kenmore East, crediting halftime adjustments, as well as the play of Sordetto. Jackson also noted two of his players were in foul trouble and that led to him pulling the defensive pressure just a bit.
The Falcons were also playing their fourth game in five days, fresh off a loss Saturday versus Grand Island. Jackson felt the win was big for the team to get some confidence back after what's been a long stretch of playing.
"It feels really good. We played North Tonawanda, a scrappy Niagara Falls; kind of tired, legs were gone. We played Grand Island and tried to play through without the excuses and we did, we lost. But we had a day where we rested, no practice, no anything. Our legs were back and we seen what are capable of. ... That win was big to get us back moving," Jackson said.
The team has no time to rest, though, as they battle North Tonawanda again, tomorrow.
Jackson said he'd like to see the individual defense get better, and also to limit the number of turnovers with better passes.
With the win, Niagara-Wheatfield increases their league record to 7-2, just one game behind Lockport and Grand Island atop the standings.
The Falcons have won five of their last six games, and they look to increase that total at 6:30 p.m. tomorrow at North Tonawanda.
Categories
School feature Sports Sports feature