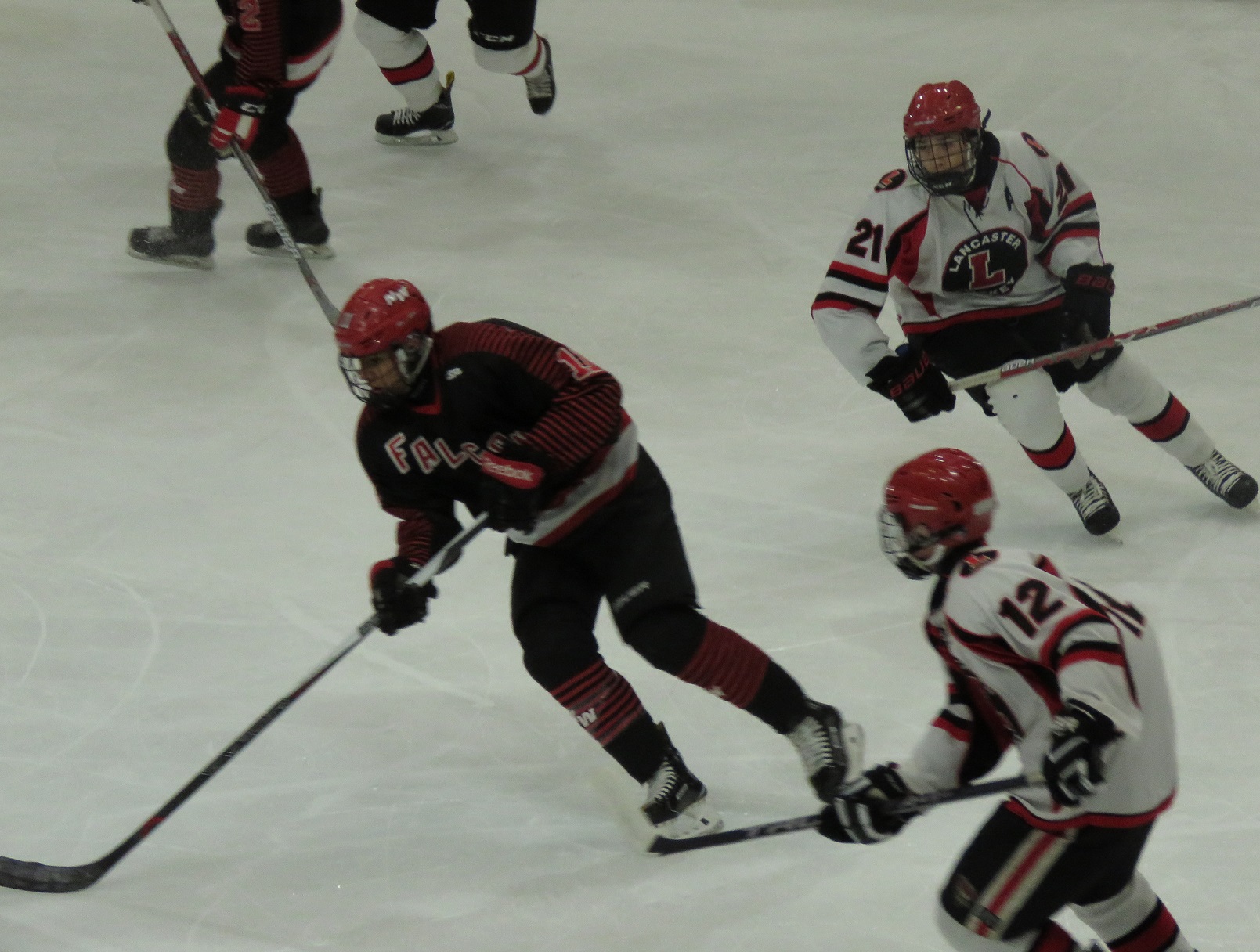 Falcons forward Chace Woods skates away with the puck during a game versus Lancaster at Harbor Center on Saturday night. (Photo by David Yarger)

by yarger
Sat, Jan 20th 2018 09:35 pm
Senior scores one goal and assists another in win
By David Yarger
Tribune Editor
Niagara-Wheatfield head coach Rick Wrazin knows when his team is at its best. On Saturday night versus Lancaster, he saw some good things, but said his team was outplayed. Regardless, the Falcons won their third straight division game over the Legends, 2-0.
Senior Chace Woods played a part on both goals, scoring the first and assisting the final goal. Woods also just missed two more goals and also set up two shots that were saved or just wide.
Woods got things going for the Falcons over five minutes into the first period. Woods wound up for a slap shot from "his spot," as Wrazin called it, and executed perfectly, as the puck went over the right shoulder of the Legends goalie and into the top left corner of the net, giving the Falcons a 1-0 lead.
Woods nearly scored a second goal with a little 5:10 remaining in the first. The shot was identical to the first goal, but this one rang of the goal pipe.
Lancaster put pressure on late, but N-W goalie Peyton Siegmann came up clutch with several saves.
Early in the second period, Woods was at it again. Woods received a pass from Michael Lotempio and dished it to Nick Peters who put the puck in the back of the net, making it 2-0 Falcons.
The Falcons had a couple more opportunities in the period, as Woods and Caleb Lee couldn't connect on a 2-on-0. Then, Chris Tobey deflected a Legends pass off his body and had a clear breakaway. Tobey was unable to finish.
Once again, Lancaster made life difficult for the Falcons at the end of the period, but Siegmann was there to make every save.
The third period was mostly quiet, other than a few situations. Woods hit the goal pipe once again, just missing by inches.
The Legends had a 5-on-3 power play, but the Falcons were able to kill the penalty without any hiccups.
Late in the game, Lancaster was able to get a puck past Siegmann, but the goal was waved off due to interference, saving Siegmann's shutout with just over a minute to go.
The Legends outshot the Falcons, 18-11, but as the final horn sounded, the scoreboard read, 2-0, in favor of Niagara-Wheatfield.
Opportunities were aplenty for Woods today, but seeing some of them hit the goal pipe or go just wide could be aggravating. Nevertheless, Wrazin was pleased with Woods performance and said the senior knows where to be at all times.
"He's a goal scorer; he should have more than he does, and I know he's a little frustrated by that. But, he puts himself in good spots and ... we were fortunate he was able to get that one and it was a great shot," Wrazin said.
Wrazin said he felt his team didn't play to its highest level, and there is still work to be done as the team moves forward.
"The message is to play the right way, because we let the game get to a one-and-done back-and-forth game in the second period, and it benefitted us for a while; we got some good scoring opportunities, but then they started taking over and we talked about getting back to what we do and we never got back to it.
"For us, the big thing is, our kids know how we want them to play and that's how they have to play if they wanna be as good of a team as they can," he said.
The win extends the Falcons record to 11-3-1-1 overall, and 8-1-1-1 in Division 1 Federation play. The team is also only two points behind first place Williamsville North, but Wrazin said his team is only focused on the next task at hand and not who's where in the standings.
The Falcons next contest is back at Harbor Center at 6:30 p.m. Saturday versus Canisius.
Categories
School School feature Sports Sports feature