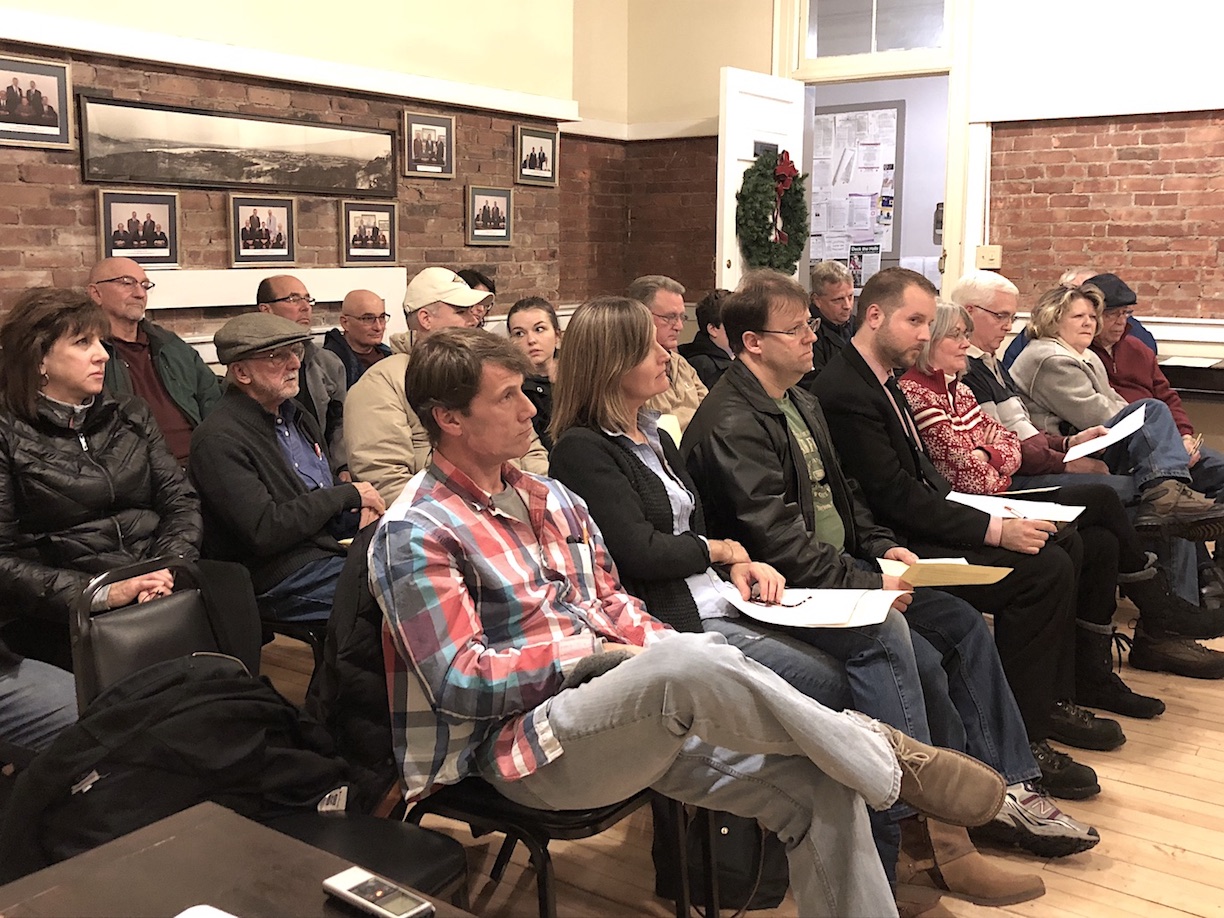 by jmaloni
Wed, Dec 13th 2017 07:00 am
3 board members not in favor of house off a hill
By Joshua Maloni
Managing Editor
Almost two-dozen Village of Lewiston residents came to the Zoning Board of Appeals meeting Tuesday night to oppose a dimensional variance request for a new build at lot No. 210 on South Third Street. Many hands were raised to voice an opinion but, before anyone had a chance to speak, ZBA Chairman H. John Ritter essentially took the words out of their mouths. He said he couldn't vote in favor of a municipal code alteration, which, he said, would "devalue" the neighboring properties.
About a half-hour later, board members Peter MacLaren and George VanHoose joined Ritter in voting "No" to Benjamin Homes' request for a variance.
The property owner, Ben Wojtowicz, sought to change the required front yard setback from 20 feet to 14 feet (zero feet from the right of way), with a 5-foot side yard setback. The lot slopes downhill, and the goal in asking for a variance was to push a new build closer to Third Street.
Wojtowicz was represented at the ZBA meeting by Jim Fittante of Fittante Architecture. Fittante said, "We're actually seeking the variance to help improve this project and move it away from the bank, to be less invasive on the bank. We're looking to move it closer to the road, which already has a large setback."
Fittante said the property has "already been an approved single-family lot for over 45 years. ... It's not a development. ... It's already a single-family lot. It's been on the tax roll for over 45 years." Jim Fittante explained the area within the green box is buildable. The black outline is how much Benjamin Homes intended to use. The bottom picture is where the applicant sought to move the structure upon receipt of a variance.
Ritter, and Third Street neighbors, said the problem is that the lot, though labeled and taxed as buildable, is not practically viable. In fact, Ritter said a building constructed on that property would, essentially, hover above Cayuga Street residences.
He noted someone with enough money could build a house on the side of the Grand Canyon, "that doesn't mean it's safe for everybody that has to respond to a fire; it doesn't mean it's safe for the people that live below it.
"This lot, to me, is not buildable, safely, for the people that are down below."
Walter and Susan Lattka live at 220 Cayuga St., below Wojtowicz's property. He said, "I have made significant improvements to my home (new roof, siding, exterior painting) and landscaping projects. But granting this variance, the proposed house is going dominate the slope, which my house is at the bottom. My property value is going to significantly reduce."
Lattka also referenced a 2000 letter from then-Village of Lewiston Fire Inspector Blair McEvoy. A ladderman for more than 30 years, McEvoy wrote, "Building a structure on the piece of property in question will become a firefighter's nightmare. In the event of a 'working' fire at this location, a quick escape from either the roof or the inside could be disastrous to fire personnel. A quick drop from a roof or escape from a window could result in a drop of 50 feet or more."
"The occupants would face the same scenario, yes?" Lattka asked.
He continued reading McEvoy's letter, "You then must imagine what it would be like to have flaming debris raining down on rooftops below."
"My house and our neighbors," Lattka noted. Walter Lattka addressed the Zoning Board of Appeals.
Additional concerns were raised about the land. Ritter said a new build "is going to cause an erosion problem, I feel. That's my personal opinion."
Village of Lewiston projects coordinator W.E. "Skip" Hauth submitted a letter to the ZBA wherein he described the slope as frail and instable.
Jim Hull arrived with Kelly Gilbert, who lives at 301 Cayuga St. He said, "When you run your hands over the surface of that area, the soil's very grainy - almost like a cinder. And to be honest with you, I think that's because a large portion of it is ground-down rock. If you just lightly run your hand over it, you can start a little slide - anywhere on that hillside. Walking on that hillside creates incredible movement of soils on the surface."
Ritter said voting "Yes" to the variance and moving the house up would result in the loss of the existing guardrail, which is above the lot and curves around the bend of the road.
"The guardrail is there for a reason," Ritter said. "If you take it down, you're bound to have a car on your front porch." Pictured is the guardrail.
Fittante said Benjamin Homes could build a bigger structure within the existing footprint - without any variances - but it was Wojtowicz's intent to erect a smaller, one-story building, in keeping with neighborhood aesthetics, and then sell the house and grounds to someone else.
The architect, a member of the village's Historic Preservation Commission, suggested a house would improve the surrounding area in that it would absorb and redirect stormwater more efficiently than the existing foliage.
He said he sought a variance before doing a geological evaluation of the lot grounds so as to know where to drill and examine. Fittante said he will not design a house or stamp architectural drawings for this parcel if the land isn't geologically sound or is unbuildable.
ZBA member Michael Swanson said granting the variance was a better option, so as to push the house away from the bank.
"This project will move forward whether we grant the variance or not," he said. "There will be a building."
Swanson and colleague Bart Klettke voted "Yes" on the variance request.
Following the meeting, Fittante said, "I think it would've been a better project with the variance. ... I really don't think it was a win for the village."
The Morgan Lewis Village Boardroom inside the Red Brick Municipal Building was filled, in part, because of the efforts of Lewiston resident Brian Michel. The son of a famous local journalist - and an outspoken opponent of the Grand Island tolls - Michel has invited neighbors to join the "P.R.I.D.E. of Lewiston" (preservation, restoration, integrity, development, economy) community watchdog group. 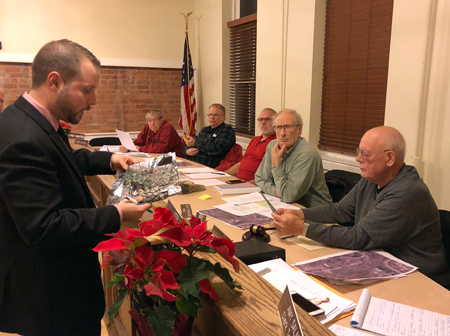