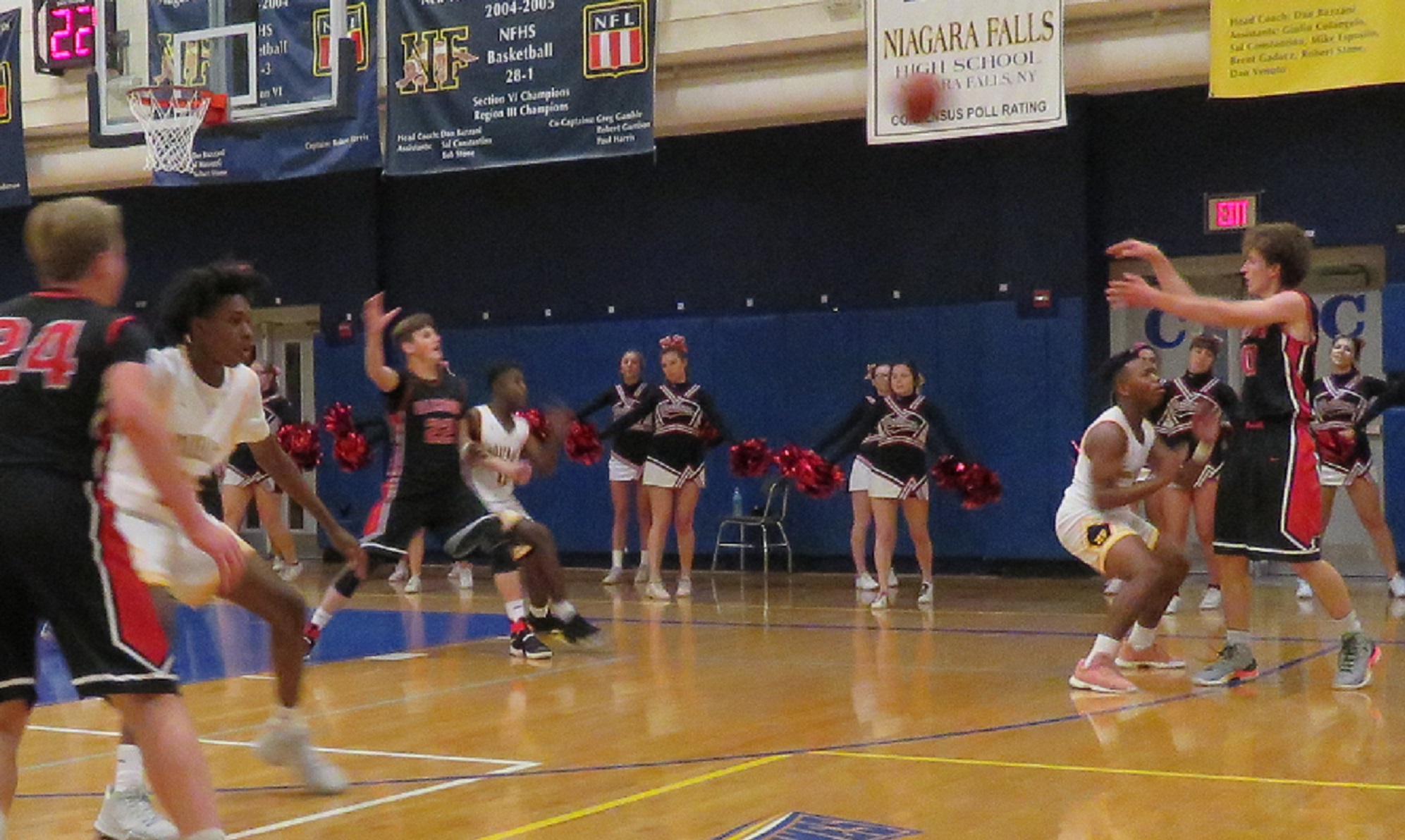 Billy Scullion of the Falcons posts up his defender as he receives a pass from Zack Stanley. (Photo by David Yarger)

Tue, Dec 12th 2017 11:00 pm
Wolverines lead entire game, never look back
By David Yarger
Tribune Editor
Niagara Falls High School has been a thorn in the side of Niagara Frontier League basketball teams for years. Tuesday night, the Wolverines proved to the Niagara-Wheatfield Falcons that trend is still alive, defeating the Falcons, 76-22.
The Falls got off to a quick 16-0 start behind two buckets from Syquan Ralands and Marquise Miller, as well as two 3-pointers from Tazaun Rose. The Wolverines won the first quarter, holding the Falcons to one field goal, 18-2.
In the second quarter, Ben Devantier added 5 points to get the Falcons offense moving a little, but everything that the Wolverines put up Tuesday night seemed to find the bottom of the net. The Wolverines added 14 more points in the second quarter, and took a 32-9 lead into the half.
In the third, the Falcons had their best offensive quarter, but so did the Wolverines. Anthony Ruffino scored 7 of the 11 Wheatfield second quarter points. Ruffino ended up with a team-high 9 points. The Wolverines used an 11-0 run before the end of the quarter to extend their lead to 56-20. The run was highlighted by eighth grader Roddy Gayle, whose tomahawk slam dunk rose the crowd to its feet.
In the fourth quarter, it was like the first quarter all over again, as N-W only amassed two more points, while the Wolverines added 20 more points, resulting in a 76-22 final.
Niagara-Wheatfield coach Erik O'Bryan spoke highly of Niagara Falls, saying they may be the best team on their schedule this season. He added, the team shouldn't get down about the loss, as it's still early and there are many more games to play.
"We're not going to let it ruin us," O'Bryan said. "It is what it is. It doesn't matter if you lose by 10, 1 or 5; it doesn't matter. It's just a matter of picking up the pieces and moving on. We get to get on the floor again Thursday night, then we have another league game this Friday."
O'Bryan mentioned to his team to remember they have one-up on other teams, because they played a league game versus Kenmore East last week and won. He reiterated the team's goal is to get to Buffalo State (where Section VI championships are played) and the loss versus Niagara Falls shows the team has work to do.
Niagara Falls, known for their chaotic defense that causes turnovers, garnered praise from O'Bryan.
"It's really hard to simulate that pressure during practice. You can throw nine guys out there, and it's still tough to simulate," O'Bryan said.
For the Falcons, Devantier finished with 5 points, while Nick Clouden, Davon Ware and James McVay all added to the score sheet. The Falcons record drops to 3-1 overall and 1-1 in league play. Their next game is on the road at Cardinal O'Hara at 6:30 p.m. Thursday in the "Public vs. Private Challenge." The following night, N-W will go back on the road to face North Tonawanda at 7 p.m.
For the Wolverines, 10 players scored in the rebounding win after the team took a tough defeat to the hands of The Park School, Saturday night.
The Wolverines were led by Miller, whose effort rebounding offensively and defensively, as well as game-high 13 points, all payed dividends for the Falls. Niagara Falls coach Sal Constantino said Miller, who didn't play much in the Cataract Classic due to illness, showed a lot of what he can do tonight.
"He's obviously over what was bothering him," Constantino said. "He's an energy guy. We play him as a post, and he's truly undersized, but the fact of the matter is, he's athletic, aggressive and what you saw tonight he can give us."
Constantino gave credit to O'Bryan and the Falcons, saying, "The score doesn't dictate how hard the kids from Wheatfield played. I've never seen an Erik O'Bryan coached team that didn't really put in effort and didn't really play hard. So, they were a little outmanned tonight, but I'm sure they'll be around and they're gonna surprise some people."
Four players scored in double figures for the Wolverines, including Miller, Josiah Harris with 12, Moran Montgomery with 11, and Rose with 10. The Wolverines' record increases to 2-2 on the season, and their next game is at home versus North Tonawanda at 6:30 p.m. next Tuesday.
Categories
School feature Sports Sports feature