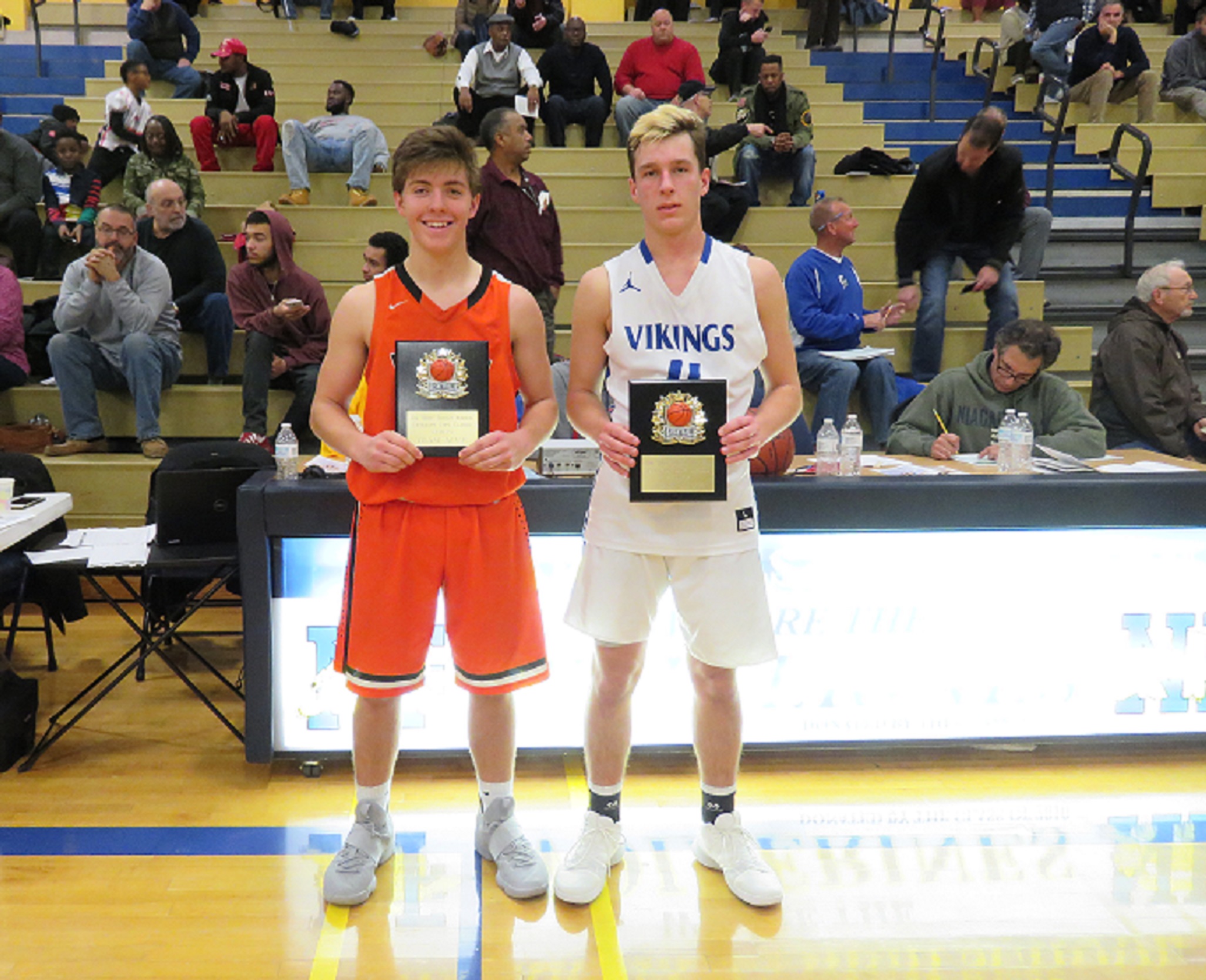 Sat, Dec 9th 2017 11:50 pm
Final day of 18th Cataract Classic finishes strong
By David Yarger
Tribune Editor
In the second and final day of the 2017 Cataract Classic, the schedule provided a slate of six games that provided everything from close overtime games to teams showing their strength in victory. Games started at noon and the final horn sounded around 10 p.m. To catch up on the day and night's action, here is a recap of the final day of the 18th Cataract Classic.
Nichols 52, Medina 35
In the first game of many, Nichols walked away the victor versus Medina, 52-35. TJ Banaszak led Nichols with 14 points, on his way to game MVP honors for the team. On the losing end, Jalin Cooper had a game high 17 points, all of which came in the second half. Medina struggled to find their identity offensively, and Nichols was able to hit from 3-point range eight times on the other end, solidifying their road to victory. For Nichols, Aidan Horan, Chris Stineman and Hugh Purks all chipped in 9 points in the victory. 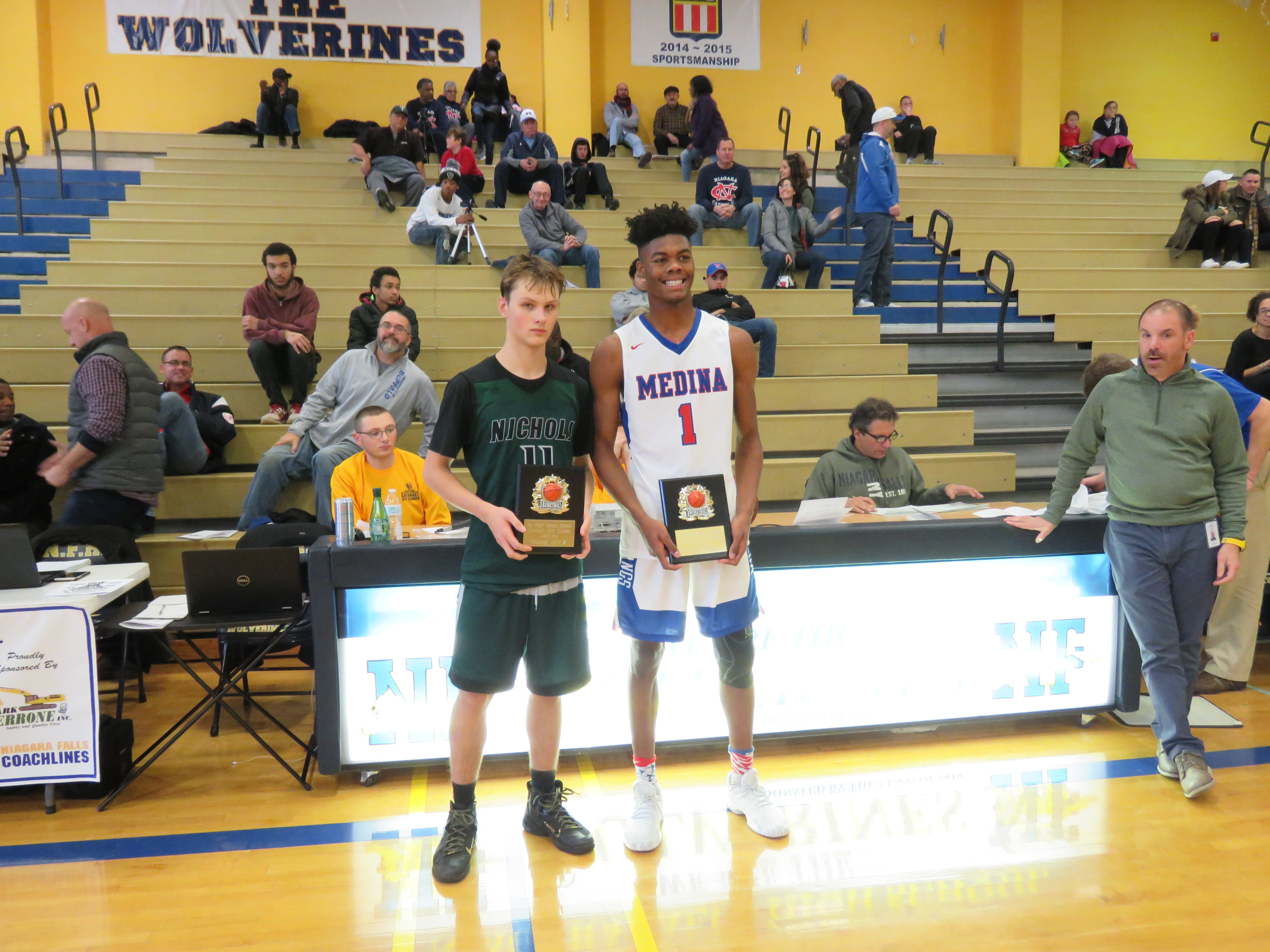 Left to Right: Game MVP winners, TJ Banaszak of Nichols, and Jalin Cooper of Medina. (Photo by David Yarger)
Franklinville 65, Niagara Catholic 59 OT
In what was undoubtedly the most entertaining game of the two-day tournament, Franklinville pulled through in overtime to squeak a win away from Niagara Catholic, 65-59. Niagara Catholic led for majority of the first three quarters, but in the fourth it was back-and-forth on each possession. If one team made a shot, the other would do the same. With the score tied at 53-53 and under a minute left, both teams had opportunities to seal the deal, and didn't execute. A Franklinville turnover gave NC the ball with 19.3 seconds left. Jalen Bradberry, the game MVP for NC, hoisted a fade away three that went off the side of the rim, giving Franklinville another opportunity. With 1.1 seconds left, the Panther launched a high inbounds pass that went off the court divider at half court, resulting in a turnover and Patriots ball under their own basket. On the inbounds Jaemon Turner's 3-pointer was no good and the teams went to overtime. There, Franklinville showed its dominance, as Isaac Kopp banked in one of six 3-pointers on the day, giving the Panthers a 58-54 lead. Game MVP Sam Erickson took over from there, scoring the team's final 7 points. Erickson finished with a game high 26 points and also scored his 1,000th career point in the win. For the Patriots, Bradberry finished with 15 points and Hakim Siner added 13 points and 16 rebounds. 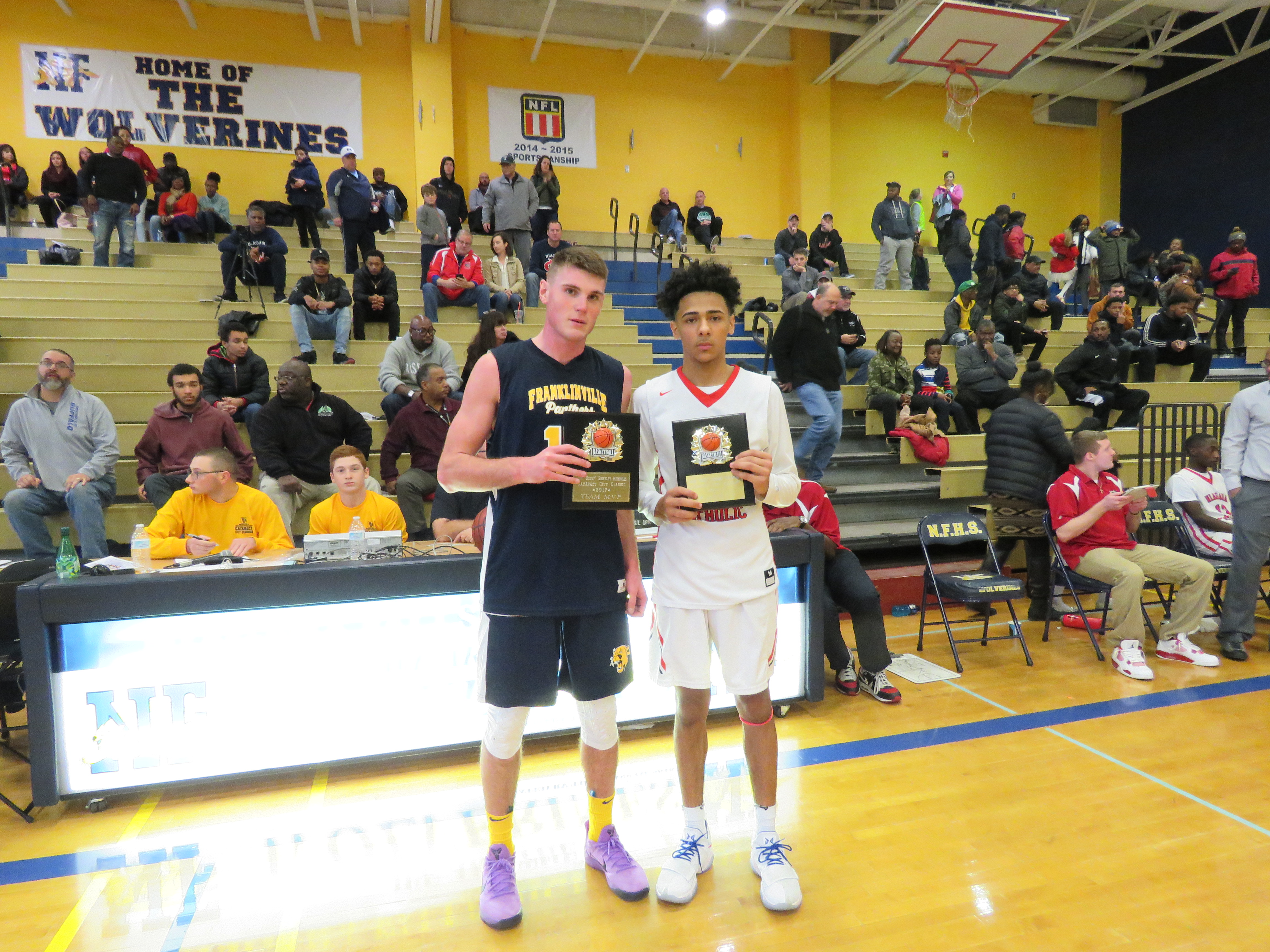 Left to right: Game MVP winners, Sam Erickson of Franklinville, and Jalen Bradberry of Niagara Catholic. (Photo by David Yarger)
Buffalo East 66, Amherst 45
In the third game on Saturday, Buffalo East was tested for about three quarters versus Amherst before they began to pull away in the fourth quarter and win 66-45. Game MVP for East, Willard Anderson scored 10 of his game high 24 points in the fourth quarter to ice the game. For Amherst, game MVP Daesean Ashley kept the Tigers in the game with big shots and a team high 18 points. Ashley scored 8 of the 18 in the second quarter, which was key for the Tigers only being down three at halftime. For East, Waunya Shaw and Justin Allen each chipped in 15 points in the win. 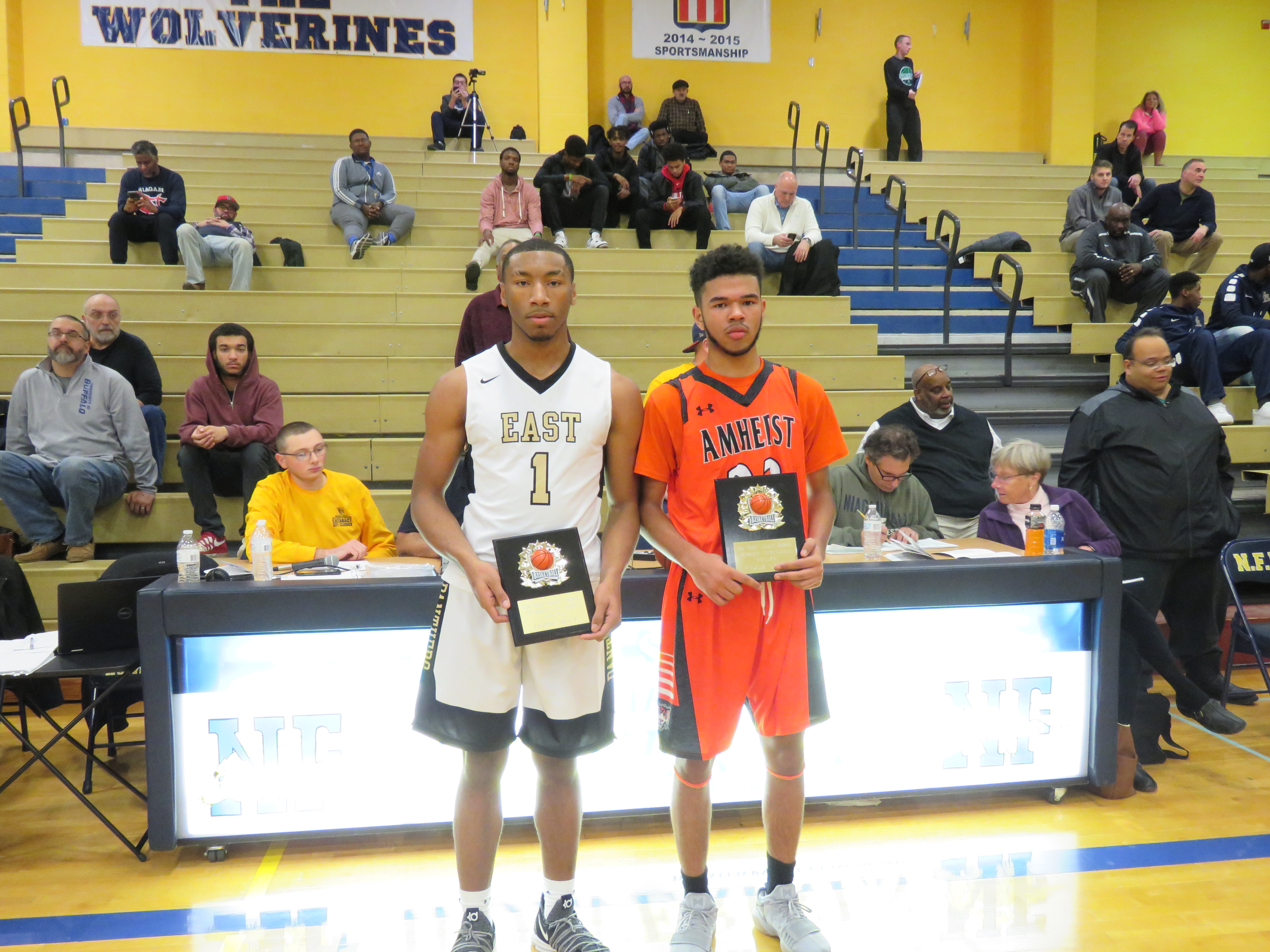 Left to right: Game MVP winners, Willard Anderson of Buffalo East, and Daesean Ashley of Amherst. (Photo by David Yarger)
Wilson 55, Grand Island 53
In the fourth game of the day, Wilson was minus one of their better players in Steve Frierichs and fought to come away with a 55-53 win over Grand Island. Wilson's game MVP Nate Fox hit two 3-pointer's during the game to give the Lakemen leads. He later helped seal the deal with four free throws. It looked as if the Vikings would pull away early, as Cam Sionko scored 8 of the teams first 16 points. Grand Island had a 16-9 lead after one quarter. From then on the Vikings became dependent on the 3-point ball, and Wilson was able to get stops and cut into the Vikings' lead. After halftime, Grand Island came out with a 23-22 lead, but it didn't last long as Fox drained a 3-pointer to give Wilson the lead. The Lakemen went on a 9-0 run in the fourth quarter, grabbing a 47-43 lead. The closest the Vikings came was within one, 50-49, but a missed free throw cancelled the opportunity to tie. Sionko hit another 3-pointer late to cut into the lead, but in the end it was too late and Wilson was able to put the game on ice at the free throw line. Sionko received game MVP honors for the Vikings with a game high 28 points. For Wilson, Fox had 24 points on six 3-pointers, while Jake Miller added 11.
Monroe (Sec. V) 64, Williamsville North 48
In the second to last game of the classic, Monroe dominated from the tip. In the 64-48 win over Williamsville North, the Redjackets never trailed, and got off to a 15-0 start before the Spartans recorded their first field goal. Monroe took a 41-14 lead into halftime. The Redjackets were led by Jonathan Jones, whose red-hot shooting from behind the arc earned him game MVP honors for his team. Jones finished with 24 points. Also, for the Redjackets, Tyquil Glasgow chipped in 12 points. On a rough day offensively for the Spartans, Greg Poland took home game MVP honors for the Spartans with a team high 12 points. Jonathan Abaya added 8 points for the Spartans in the loss. 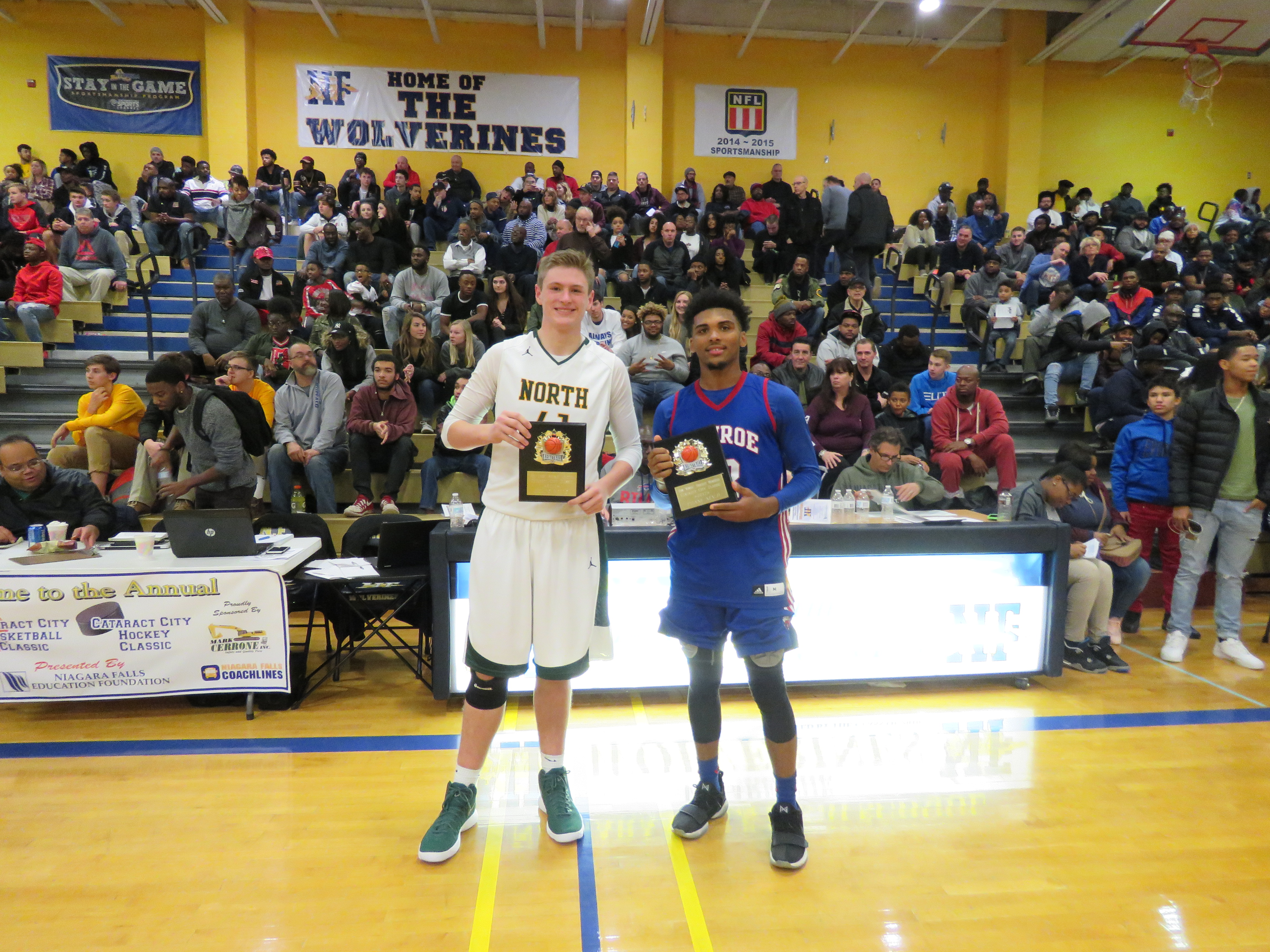 Left to right: Game MVP winners, Greg Poland of Williamsville North, and Jonathan Jones of Monroe. (Photo by David Yarger)
Park 68, Niagara Falls 50
The grand finale of the Cataract Classic was a hyped-up matchup between Park and Niagara Falls. On Saturday night, the Pioneers of Park dominated the Wolverines, who were playing their second game in as many nights. Park never trailed in the game, and extended their lead as high as 27 points. With eight players over six feet tall, Park used its height to their advantage, outrebounding the Falls offensively and defensively, and using their length to score in the paint. The height also limited what the Wolverines could do offensively. Park, labeled as one of the top schools in Western New York, also couldn't miss offensively. The team hit seven 3-pointers, four of them from game MVP Brandon Smith. Smith finished with 21 points. Also for the Pioneers, Daniel Scott chipped in 13 points and Ebuka Nnagbo had 12. For the Falls, Taylor Sanders led the way with 11 points, on his way to game MVP honors. Also, Josiah Harris had 9 points off three 3-pointers, and Quran Dubois and Willie Lightfoot added 8. 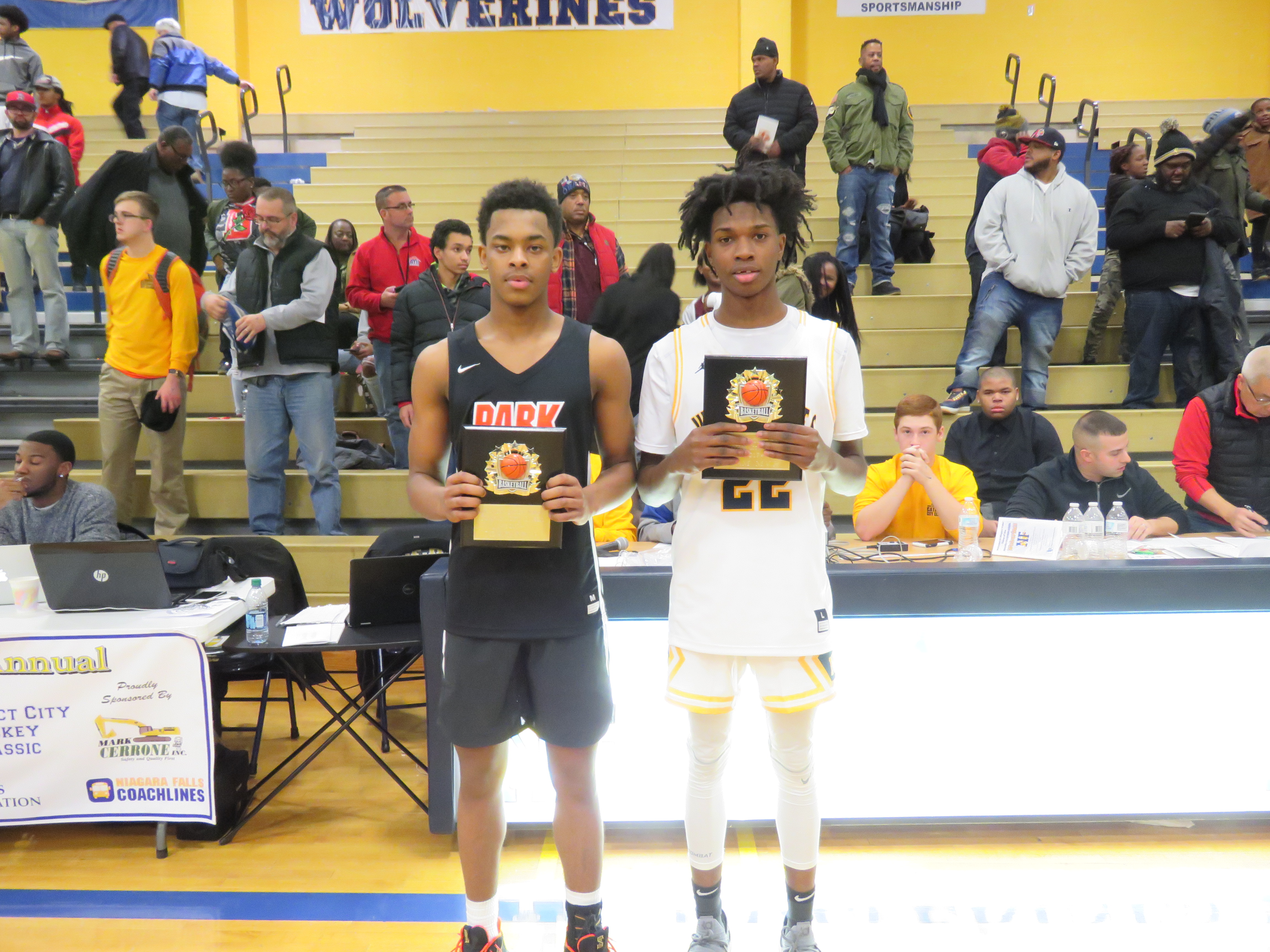 Left to right: Game MVP winners, Brandon Smith of Park, and Taylor Sanders of Niagara Falls. (Photo by David Yarger)
In closing, the two-day Cataract Classic was able to not only show off local and surrounding talent, as well as providing an entertaining slate of games for the community, but also raised funds that go back to students within the Niagara Falls School District. The Niagara Falls Education Foundation has guaranteed that the proceeds from the tournament go to scholarships and athletic and academic opportunities for students in the Niagara Falls district. The 18th annual classic once again lived up to its billing, provided ooh's and aah's to the crowd, and continued to raise funds for a good cause.
The Cataract Classic continues on the ice at Hyde Park Ice Rink on Dec. 29 and 30, as Niagara Falls, North Tonawanda, Lewiston-Porter and Amherst will all battle in the fifth annual Hockey Cataract Classic.
Categories
School School feature Sports Sports feature