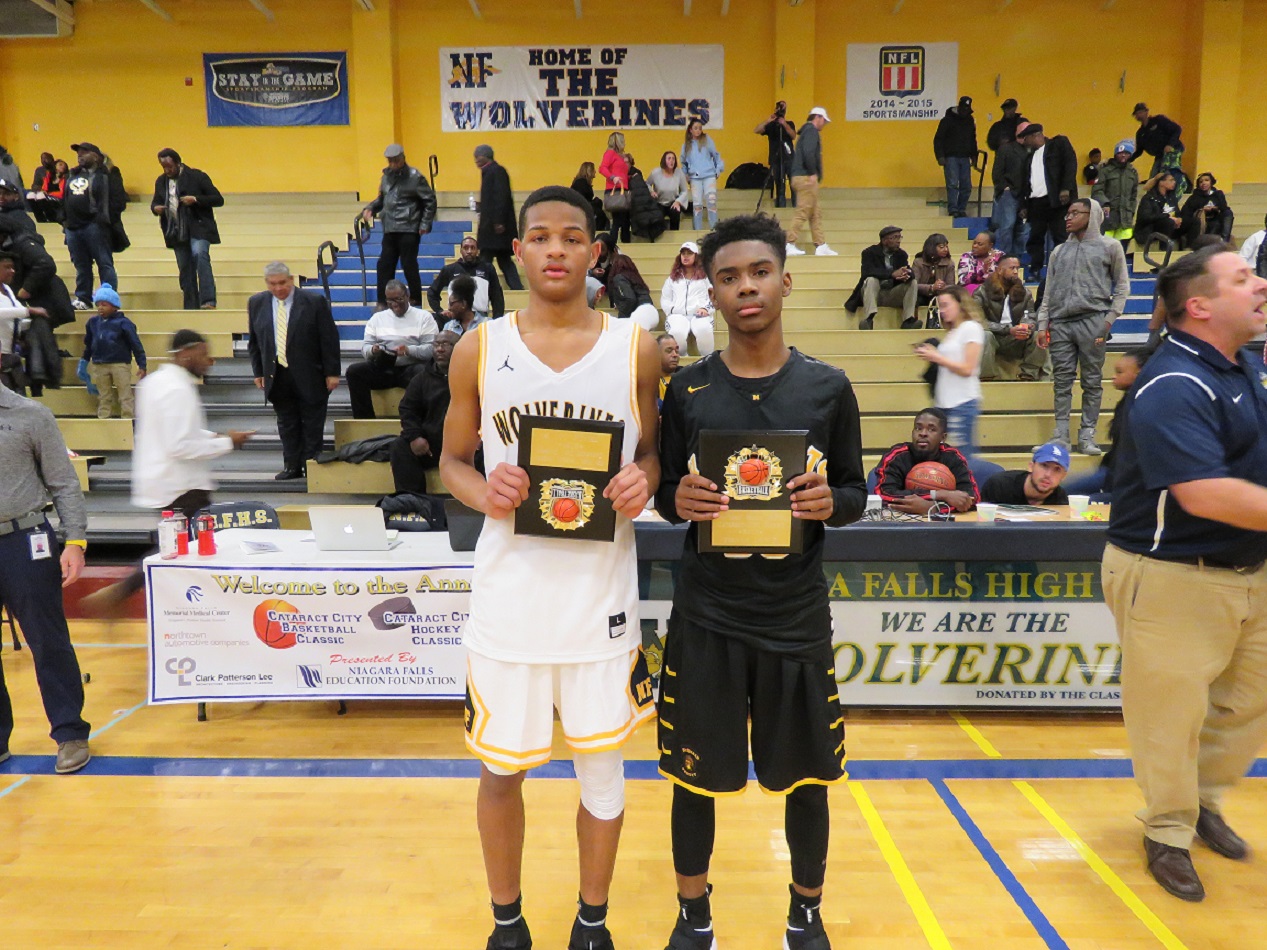 Fri, Dec 8th 2017 11:15 pm
Sweet Home squeezes out a win; Roy-Hart pulls away late; Falls takes over in second half
By David Yarger
Tribune Editor
Day one of the 18th annual Cataract Classic lived up to the hype its amassed over the years. On Friday night, fans got to see six teams in three different games that all brought entertainment to the table. With another full slate of games on tap for Saturday, here's a recap of the first three games of the Classic from Friday night.
Sweet Home 70, Lewiston-Porter 56
The Sweet Home Panthers knocked off the Lewiston-Porter Lancers in the first game of the Cataract Classic, 70-56, behind big games from game MVP Stephon Trueheart and Maurice Robertson. Trueheart and Robertson chipped in 18 and 16 points, respectively. The game was back and forth throughout, as the Lancers held a 22-21 lead in the second quarter. After a Trueheart 3-pointer, the lead was Sweet Home's for good. Trenton Scott scored 11 points in the third quarter and was able to cut the Sweet Home lead to three, but Sweet Home eventually extended their lead to as much as 17. Scott received game MVP honors for the Lancers with a game-high 24 points. Zachary Clayborne added 13 points in the loss for the Lancers. 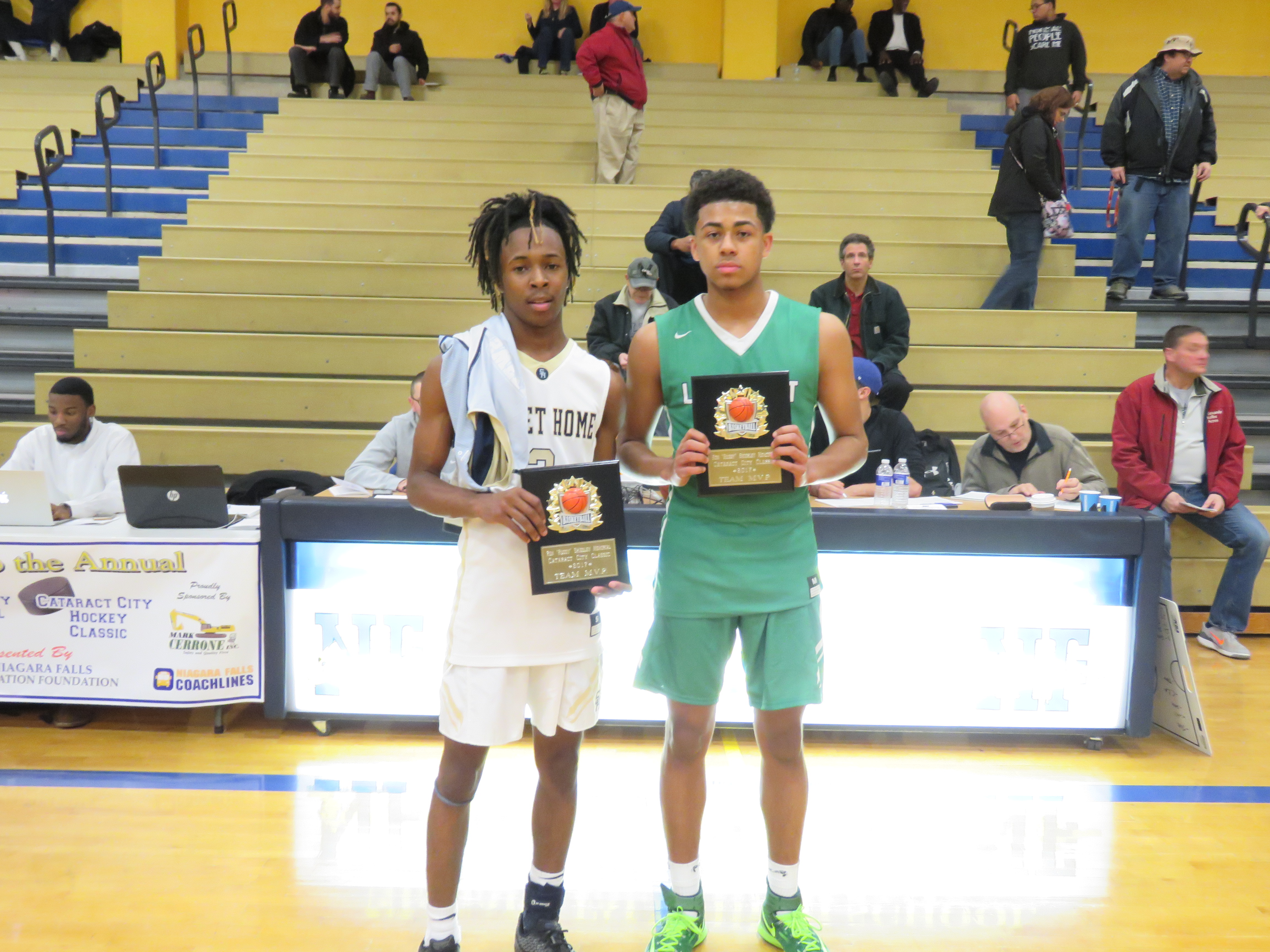 Left to right: Game MVPs Stephon Trueheart of Sweet Home, and Trenton Scott of Lewiston-Porter (Photo by David Yarger)
Royalton-Hartland 45, East Aurora 37
In the second game of day one in the Cataract Classic, Royalton-Hartland defeated East Aurora, 45-37, behind the shooting of leading scorer Jacob Bruning, who had 18 points. Bruning, on his way to game MVP for the Rams, scored 7 of his 18 in the fourth quarter to put the game on ice. There was not a lot of offense to talk about in the game, as both team's defensive pressure limited offensive opportunities. Bruno Tillman won game MVP honors for East Aurora with 11 points, while Connor Boss added 12 in the loss. 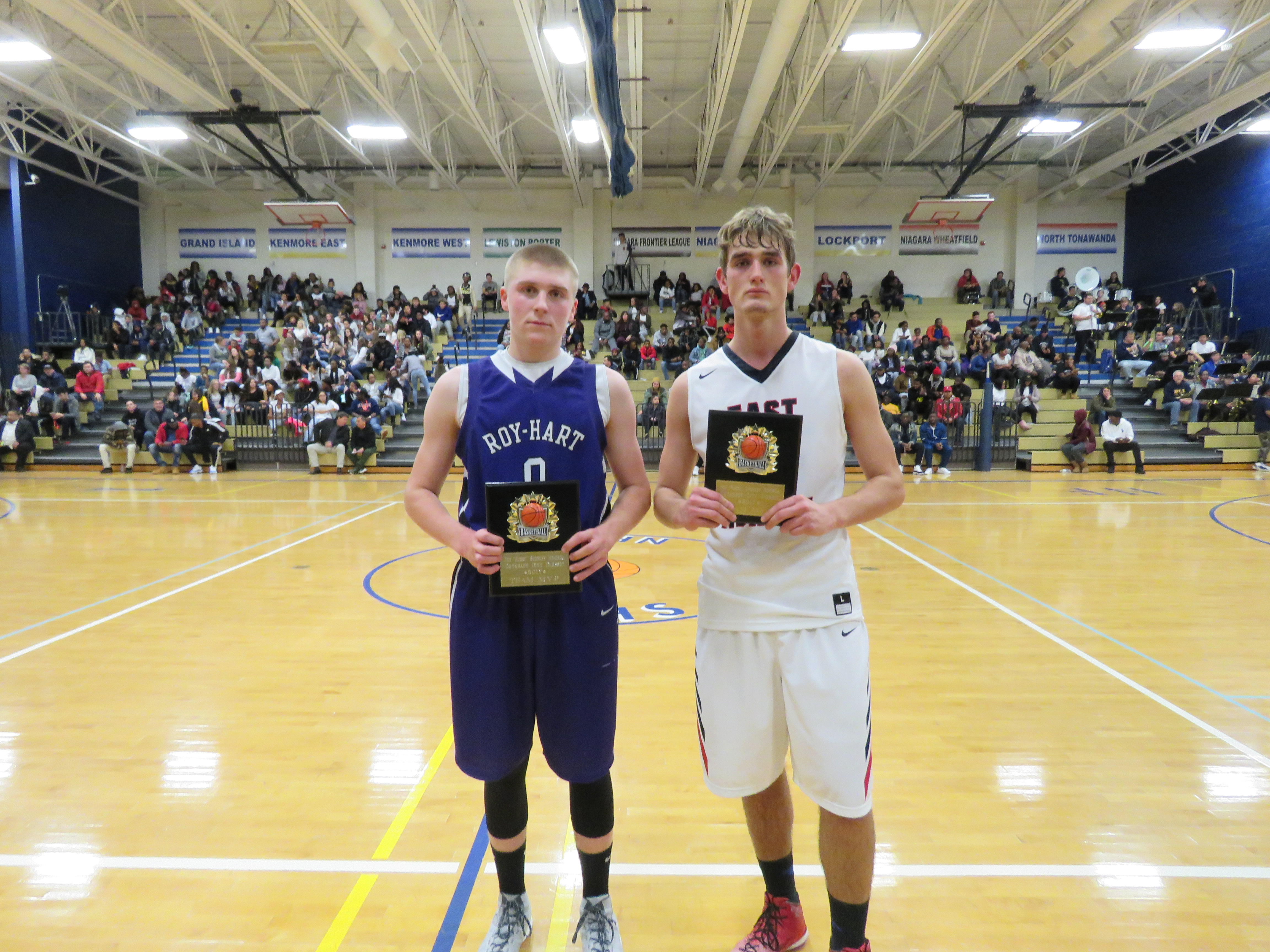 Left to right: Game MVPs Jacob Bruning of Royalton-Hartland and Bruno Tillman of East Aurora. (Photo by David Yarger)
Niagara Falls 76, McQuaid Jesuit 54
In the nightcap of day one, the Niagara Falls Wolverines defeated McQuaid Jesuit of Section V, 76-54. The Wolverines were led by eighth-grader Roddy Gayle who had a game-high 17 points, on his way to game MVP honors for the team. Gayle brought down the house in the fourth quarter on an alley-oop dunk from fellow eighth-grader Willie Lightfoot. The Wolverines had nine players score in the win, including 13 from Quran Dubois, and 11 from Tazaun Rose and Moran Montgomery. For McQuaid, the team was led by Kobe Long who scored a team-high 15 points, on his way to game MVP honors for the team. Jermaine Taggart chipped in 12 points, and Josh Purcell had 9 points.
The Cataract Classic is back in action tomorrow with six games on tap. Starting at noon Medina will go head-to-head with Nichols. Following that, Franklinville will face Niagara Catholic at 1:30 p.m. Amherst will follow versus Buffalo East at 3 p.m. Wilson versus Grand Island is slated for 4:30 p.m. Williamsville North will battle Monroe High School out of Rochester at 6 p.m. Finally, the Wolverines will take on the Park School out of Buffalo at 7:30 p.m. to cap off the 2017 Cataract Classic. Game times after game one are subject to change, depending on the length of each game. Admission is $5, but for students who show proper school identification it's $3.
Categories
School School feature Sports Sports feature