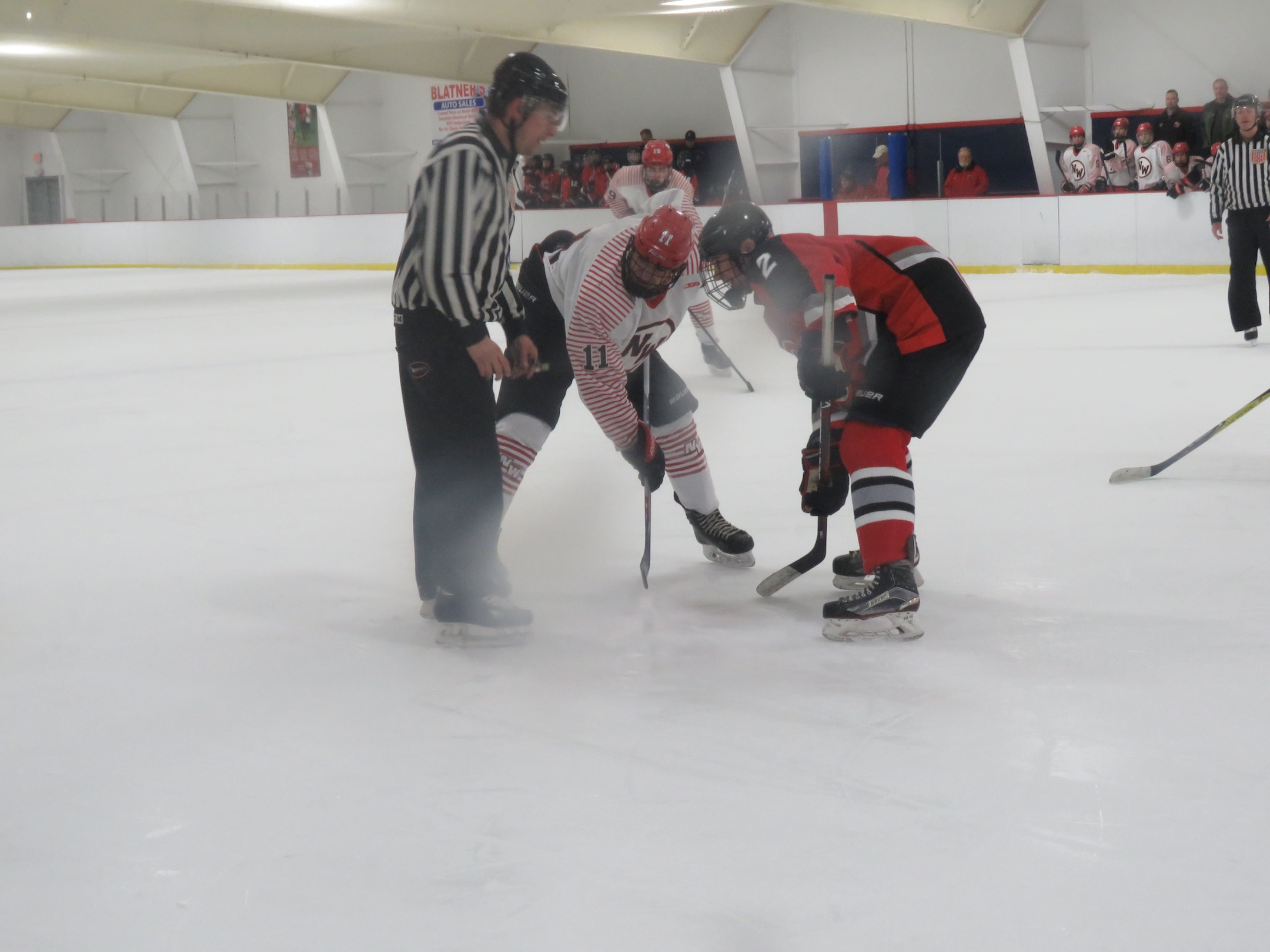 Chace Woods duels for a faceoff with Clarence's Noah Corry at Tuesday's Division 1 contest at the Hockey Outlet. (Photo by David Yarger)

Thu, Dec 7th 2017 01:40 pm
Falcons pick up their first division win of season
By David Yarger
Tribune Editor
On Wednesday night, the Niagara-Wheatfield Falcons displayed superb defense versus Clarence throughout the course of the game. They needed the effort for all 45 minutes of play, and they got it. The Falcons defeated Clarence 2-1 in Section VI Division 1 action.
Wheatfield got on the board early, as a lofted puck neared the goal crease. As the puck was coming down, Chace Woods batted it out of the air and past the Clarence goalie to give the Falcons a 1-0 lead.
Most of the first period was played in the Clarence zone, as Chris Tobey just missed on a breakaway late in the period, and then a two-on-one was snuffed out shortly after.
In the second period, the Falcons kept pressure on the Red Devils, but off a faceoff in the Wheatfield zone, Adam Zaffram put one behind Falcons goalie Peyton Siegmann to tie it up at one.
Around two minutes later, Dominick Pulli got the lead back for the Falcons off an assist from Nick Peters and Zack Belter. This gave Wheatfield a 2-1 lead that they'd hang onto for the remainder of the game.
The finish wasn't easy for the Falcons, as Siegmann made several saves to preserve the 2-1 lead. The Falcons had a five-on-four opportunity early after a 10-minute misconduct and four-minute major penalty, but a penalty on Wheatfield made it an even four-on-four. The game got chippy late, as there was various pushing and shoving around the goal crease.
The Falcons' defense was put to the task with 1:55 left, as they were called for roughing, sending Peters to the penalty box and giving the Red Devils a six-on-four opportunity after pulling the goaltender. Clarence was unable to get one by Siegmann, who made 18 saves in the win, and the defense held their ground for the final two minutes to preserve the win.
Coach Rick Wrazin talked to his team about the final two minutes during two timeouts called, one by N-W and one by Clarence.
Wrazin said, "We talked about what we thought they were gonna do, how we had to play in our zone and defend it; about guys coming off the faceoff and making sure we're not leaving anyone open. The big thing on it was ... at that point in the game it's about leaving everything out there and we talked to the guys about doing that when guys are blocking shots; we probably blocked three shots in that last two minutes. Positionally, we were very strong ... it's about defense first."
The win is also the first division win of the year for the Falcons and it moves their record to 2-0-1. Wrazin said the win was necessary for his team.
"It's one we felt like we needed. It is early and we like to think that every game along the way is building towards what you wanna be at the end of the year. It's a great win for us and a bigger win because of how we played," Wrazin said.
Next up for the Falcons: they'll take a trip to Mount Vernon, NY to face off against two teams they've never seen before, in Scarsdale High School and John Jay High School, both from Section I. Wheatfield will face Scarsdale on Saturday at 1 p.m. at the Ice Hutch Ice Rink, then come back Sunday to face John Jay, Section I runner-up last season, at 1 p.m. at the same venue.
Wrazin said the trip is more then just about hockey, and it'll be nice to see what his team can do.
"It's a great trip for the boys in terms of team building and doing stuff together. You always come closer as a team on a road trip, but as far as the hockey part goes, it's a good opportunity for us to get some of the newer guys on the ice. It's a good opportunity for us to work on progressing to what we wanna be at the end.
"Going down there and not knowing anybody might actually be a little bit of a help, because we're not gonna be adjusting to anything we see somebody else do, we're just gonna concentrate on what we want to do," he said. 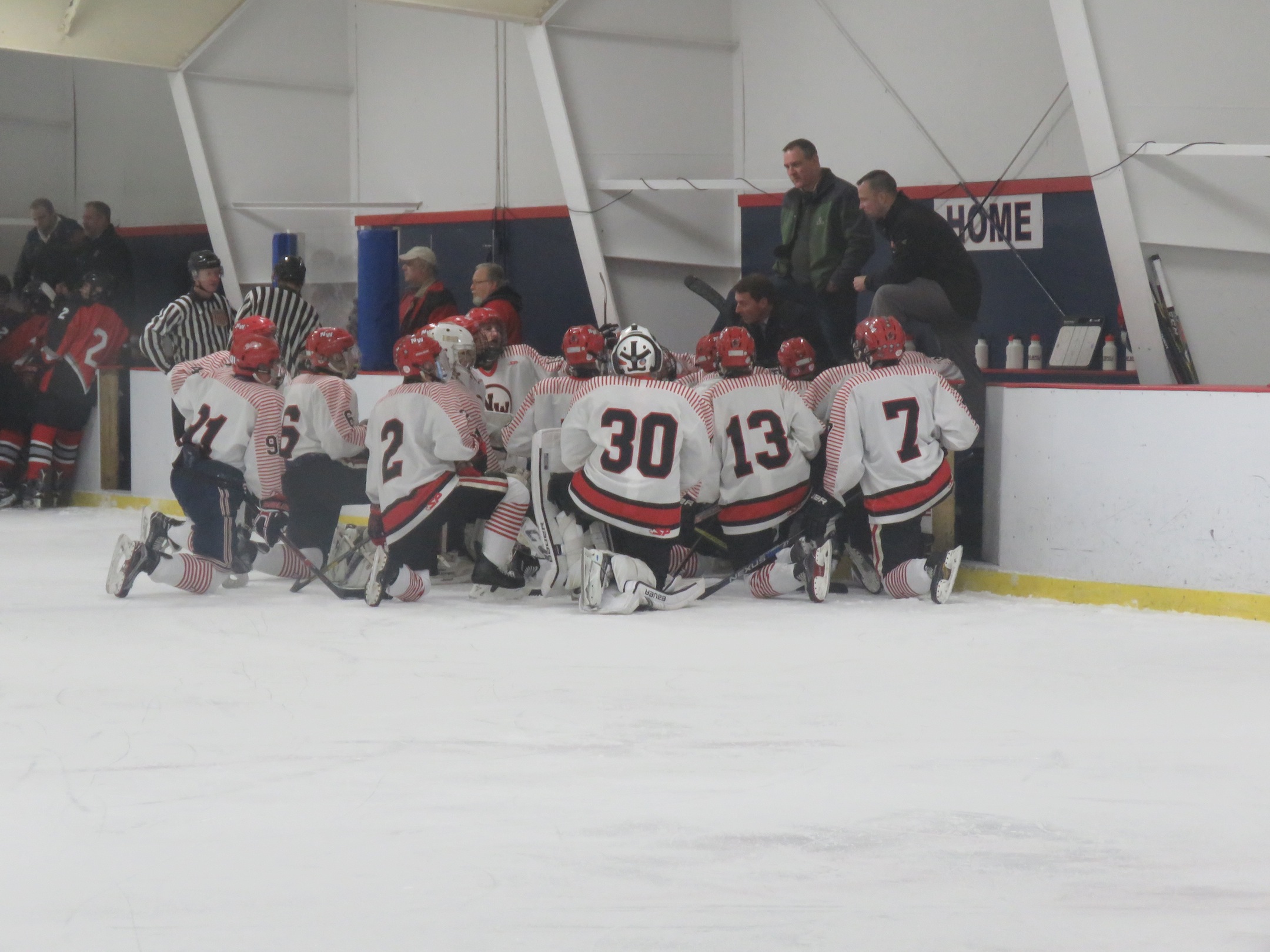