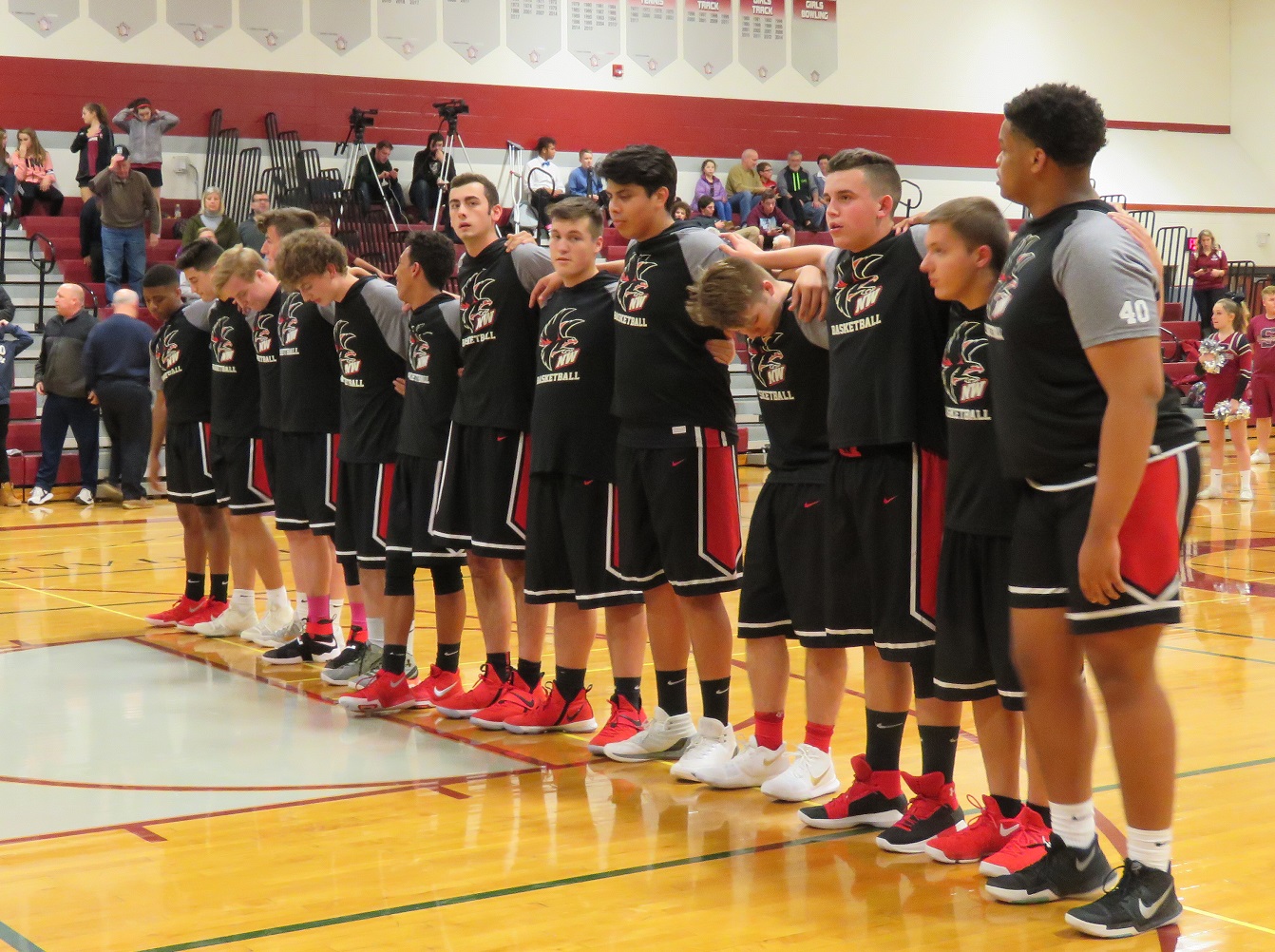 Tue, Dec 5th 2017 10:45 pm
Third quarter run fuels Niagara-Wheatfield comeback
By David Yarger
Tribune Editor
Playing two games in as many nights demands a lot out of basketball players from high school to pros. On Tuesday night, the Niagara-Wheatfield Falcons played their second of three games in a row. Fatigue was shown early, but as the game went along, the Falcons seemed to gain energy and pull through for their second straight win.
The Falcons defeated the Starpoint Spartans on the road, 48-41, behind a huge comeback run in the third quarter.
Coming off a 69-51 win versus Kenmore East on Monday, the Falcons struggled to find their identity offensively and defensively to start Tuesday. Ben Devantier got the scoring started for N-W with a 3-pointer right from the get go.  Devantier had six in the quarter, and after the first the Falcons held a slim 12-10 lead.
The wheels fell off completely in the second quarter, as Wheatfield was held to one field goal in the quarter, an Anthony Ruffino 3-pointer with under 1:30 left in the half. Coach Erik O'Bryan called the sequence "awful."
"It was like an old man game out there for that second quarter," O'Bryan said. "Get a stop, walk up, shoot, jog back, shoot, both teams jog back. It was just awful."
As bad as the quarter was for the Falcons, Starpoint only extended the lead to six, taking a 21-15 lead into halftime. From there, everything changed.
As the third quarter started, O'Bryan constantly reminded his team saying, "one goal," signifying all the team cared about was winning and not to get discouraged by the scoreboard.
The Falcons listened and embarked on a 14-0 run that gave them a 29-26 lead. A big and-one layup from Nick Clouden capped off the run, while 3-pointers from Zack Stanley and Ruffino helped the cause.
It wasn't just offense that stepped up during the run though. With a full court press that lasted the entire second half and in-your-face defense, the Falcons were all over Starpoint, causing turnovers, bad passes and tough shot opportunities. O'Bryan also elected to go with a smaller and quicker lineup in the second half that wreaked havoc on the Spartans offense. O'Bryan praised his defense and noted the difference from year's past.
"We went through some lull period and then all of a sudden our defense just stepped up for us and we get two or three steals and six points now. We haven't had that for years... not something as explosive where we can go and get points that quick," O'Bryan said.
O'Bryan added, it was important when his team came out in the third quarter on the big run and changed the tempo into its favor.
N-W went on to win the third quarter 22-9 and take a 37-30 lead into the final quarter.
In the fourth quarter, the Falcons struggled to close the door, with a couple poor decisions late mixed in with turnovers, but the defense continued to step up. In a game where a plethora of fouls were called, Ruffino and Devantier fouled out in the fourth. The Falcons didn't budge with their two leading scorers on the night off the court, and they held on to secure their second straight victory, 48-41.
Effort and intensity gets overlooked when looking at a box score, and on Tuesday a few Falcons came off the bench and contributed substantial minutes to the team's win. Stanley, who started the second half, finished with six points, while Jared Domaradzki, Billy Scullion and Jordan Parks contributed highly on defense and kept the offense flowing smoothly. O'Bryan praised the bench for what he called, "an outstanding job."
"We talk about it all the time. One goal: just win. Practice time is when you go at each other to earn those minutes, at the game it's all for on, one for all. ...You might not get the credit in the paper, but you're gonna get the credit in the locker room. That's the only place it matters.
"After the game, our leaders Anthony (Ruffino), Davon (Ware), Ben (Devantier), Nick (Clouden), were in these guys' faces giving them high-fives. That's what we need, we need those minutes. It might not be next game, it could be two games down the road, but they're ready at any point," O'Bryan said.
Ruffino finished with a game-high 17 points, while Devantier added 13 in the win.
Niagara-Wheatfield's schedule will give them a test to see what they're all about in the coming weeks, as their first eight of nine games are on the road. O'Bryan praised the fans who showed up for Tuesday's road game. Chants from the Niagara-Wheatfield "Black Hole" fan group could be heard throughout the 32-minute battle.
"Shout out to our fans that come and support. We have a great group of guys that come out and support and a great group of kids. I couldn't be happier with going to practice with what we have going on right now," O'Bryan said.
The Falcons are now off to a 2-0 start for the first time in over 10 years, and they're back in action, on the road at 7:30 p.m. Wednesday night versus Alden High School.
Categories
School School feature Sports Sports feature