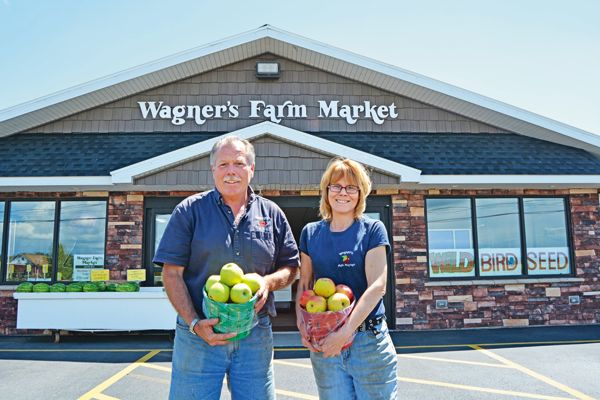 Wagner's Farm Market and Grill owners Peter Wagner and Amy Wagner Winkelmann display some of their homegrown apples in front of the store's new façade.

Wagner's grows over its 50-year history

Fri, Jun 30th 2017 06:05 pm
By Lauren Zaepfel
Tribune Editor
Wagner's Farm Market and Grill is celebrating its golden anniversary in 2017.
The 50-year-old, family-owned business, located at 2672 Lockport Road in Sanborn, is known to offer its customers everything from fresh-picked apples to blooming flower baskets and homemade meals. But it didn't start out that way.
Amy Wagner Winkelmann, who owns the business with her brother, Peter, said, "My mom and dad started this store in 1967. I was only 5 at the time."
When her parents, Lester and Sally, opened up shop, Wagner's consisted of only one, smaller building, Amy said.
In fact, the original store space now serves as the back room of the current establishment, which features a farmer's market, greenhouse and restaurant.
"So as the business grew, we added," Amy said. "That was always my dad's thing: If you had money, you put it back in. When he saw a need for something, it was added. When we needed more room, the front was bumped out. ... When we needed a separate apple room, all of our apples are in one room by themselves, that was added. When we needed a greenhouse ... we added a green house."
Both Amy and Peter agreed Wagner's is known for their homegrown apples.
"We specialize in apples," Amy said.
Wagner's has roughly 80 acres where a variety of apples are grown, as well as pears, prunes, sweet corn and many other types of fresh produce, Amy said.
In addition to selling the food harvested from the Wagner's farm, "We deal with other local growers," Amy said.
"Whatever we can by local, we buy local," she added.
But Wagner's offers more than just fruits and vegetables.
"There's a little bit of variety," Amy said. "When people come here it's not just produce. There's other goodies."
Amy bakes homemade desserts, including cookies, brownies, turnovers, fruit pies, ice cream pies and her famous "pocket pies," which are small pies that were given a nickname by local workers who often pick them up at Wagner's for lunch.
On one side of the market area is a greenhouse, which offers a variety of flowers, while Wagner's Grill is stationed on the other side.
At Wagner's Grill, customers can order anything from Perry's Ice Cream to homemade hamburgers topped with fresh veggies.
"It's like farm to table in the best sense," Amy said. "I take the lettuce and tomatoes from this (market) side and I cut them up for the restaurant to have on your burger."
Amy said the meat is ground on site.
The quality doesn't stop there.
"We still use Wardynski hot dogs," Amy said. "We don't cut back on quality. So we slice our own roast beef here. I cook my own corned beef here for Rueben sandwiches. I make my own soups, we make chili. So there's a little bit of everything going on."
The front area of the store was rebuilt and renovated after a transport truck plowed into the establishment a year ago. Thankfully, no one was hurt, but the building suffered.
"The whole front is new. The ceiling all had to be redone, because the force of the truck, it just shook everything," Amy explained.
Wagner's is now equipped with a brand-new façade.
The grill, which opened in 1984 and consisted of only 12 bar stools at a counter, features much more space and a dining area.
Additional updates to the grill are scheduled for this summer. New menu boards are slated to arrive within the next week-and-a-half or so and on July 10, booths will be added to the seating area.
"We're going to change the feel of it in here, make it a little cozier," Amy said.
Wagner's offers a personalized touch to the customer experience.
"We try and teach people every day," Amy said. "If people ask me questions, I want to be able to answer them."
She added, "I like to educate people on what time of the year stuff is available, the best time to buy it, the cheapest time of the year to buy it, the peak of the season and also how to cook it.
For instance, she said, people have asked her when they can buy fresh, local cherries, "And I say you figure around Fourth of July for a homegrown cherry," Amy said.
Peter said what's special about Wagner's comes down to "mainly the people. The people we deal with, the other farmers that we partner with and buy from, and working with family," he said.
"We like to have that personal connection with people," Amy said.
Peter said, his son, after graduating college, returned to work at Wagner's and has been doing so over the past year or so, taking the family business into another generation.
When asked how it feels that Wagner's has reached its 50th anniversary, Peter said, "It's a milestone, no doubt about it. Any business nowadays is a lot of work, and 50 years is something to be proud of."
Categories
Food Second Helping Tribune Tribune feature Tribune HP Feature List