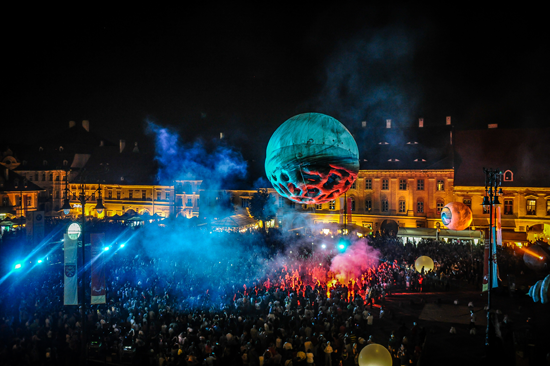 "Big Bang" will make its U.S. debut, at Artpark, this summer. (Photo provided by Artpark & Company)

by jmaloni
Sat, Jun 10th 2017 10:00 am
By Joshua Maloni
Managing Editor
As she enters her second full season as Artpark & Company's executive director, Sonia Clark is "so encouraged" about the state of the organization, its fiscal status, and the slate of activities to be put forth this summer for the community and guests from all over the world.
"We received so much support to go in the direction that was set out last year, and it's going to be a very, very strong year," she said Monday. "We're going to actually be in a much, much stronger financial position, and I think we have some incredible programs, all of which received very strong support."
In particular, she noted the recreation of Gene Davis' "Niagara 1979" "was fully supported by the community." The 43,680-square-foot "Painted Parking Lot" returned thanks to a successful $20,000 Kickstarter crowdfunding campaign.
When the community rallies behind a public art project this way, Clark said, it signifies people are on board with similar types of endeavors.
Indeed, since Clark took over for George Osborne, the man who resurrected a stagnant Artpark and created a concert series that's won countless awards, more attention has been placed on visual and performing arts.
Last year, Clark brought in a bevy of national and international singers, dancers, artists, flying fairies and a parade of "Baila Brazil" performers. New installations were planted in Lewiston's state park, new educational initiatives were put in place, and more people less inclined to attend concerts visited Artpark.
In terms of funding, "We also received our first-ever grant from the National Endowment for the Arts at Artpark (this year). Many people don't know that, but we were never supported by NEA," Clark said.
That organization, in partnership with M&T Bank, "I Love NY" and the Niagara Falls Bridge Commission, provided Artpark & Company with more than $100,000 to bring France's "Big Bang" by Plasticiens Volants to the U.S. for the first time. The visually stunning outdoor show will cap off the season on Sept. 2.
Artpark also will welcome one-man band Cyro Baptista to Lewiston at the end of July, thanks to $50,000 from the University at Buffalo Creative Arts Initiative.
"He's a very well-known and much-beloved percussionist, who has worked with Paul Simon and Michael Jackson and Sting and you name it," Clark said. "He brings a cornucopia of relationships and music.
"He's going to have a collaboration with a local artist, Shasti O'Leary Soudant; they're going to build a new installation in our Percussion Garden that was started last year. So, it's great to see that grow, and exponentially so." 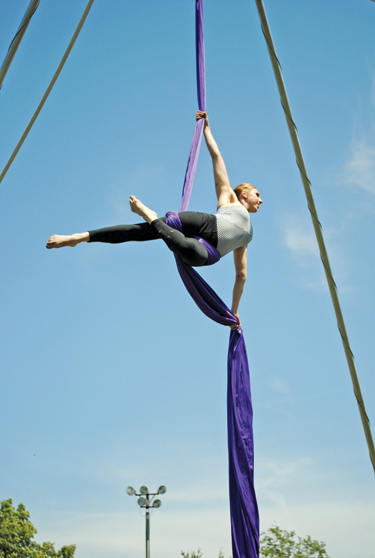 Pictured is one of the new performers for this year's Fairy House Festival. She works with Buffalo Aerial Dance. (Photo provided by Artpark & Company) 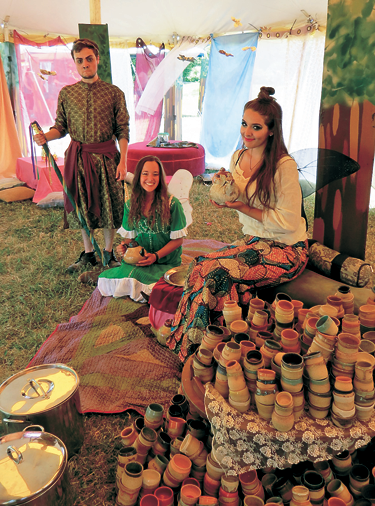 Pictured are some of the characters from last year's Fairy House Festival at Artpark. (File photo)
This year's Fairy House Festival has expanded into an all-day event, and was renamed the "Summer Solstice Celebration."
"Artpark is meant for the outdoor celebrations," Clark said. "Outdoor celebrations using the cultural assets, the imagination; I think there's no better place than Artpark to do those kinds of celebrations."
The seventh annual Fairy House Festival will kick things off at noon on Saturday, June 17. Programming for children and families will run until 4 p.m.
From 4-7 p.m., the solstice will be observed with live outdoor performances by Slyboots Circus, Buffalo Aerial Dance, spoken word artists, dancers and actors in Emerald Grove.
The renowned Lehrer Dance will then perform from 7-8:30 p.m. in the Mainstage Theater.
Finally, a sunset after-party will take place on the theater terrace and in the woods until midnight.
Clark said she's optimistic more people will attend non-musical events this summer, thanks to positive word-of-mouth from those who tried out new programs and activities last season.
She noted "Big Bang" is "actually selling really well" for a show that's three months away, and "Maybe that's something from last year, that they have a little more trust (in the performances)."
Of course, the concerts are still the top draw at Artpark.
Clark acknowledged it's getting harder and harder to book top musical acts for "Tuesdays in the Park."
"It definitely is a very big challenge," she said, noting area casinos are booking more and better acts, Darien Lake (working with Live Nation) has poached several former Artpark headliners, and even the Albright-Knox Art Gallery has an A-list outdoor show this summer, with a triple bill featuring Tonic, Collective Soul and Our Lady Peace.
Plus, acts are asking for almost twice as much money as they did just a few years ago.
Still, "I think our concerts are pretty strong," Clark said. "We still are booking. We still have two more concerts, we're hoping (to announce). I think, overall, I feel pretty good about the series."
Artpark produces the "Tuesdays in the Park" concerts, while Funtime Presents has taken over the former Wednesday night series. The latter is now known as "Coors Light Concerts," and features acts performing on different days of the week.
Funtime also books acts for Canalside and the Town Ballroom in Buffalo.
"I think our partnership with Funtime is going pretty well," Clark said. "We decided to make these concerts for a slightly smaller audience. And Volbeat (the first act on May 20) showed us it actually works really well. It was a very good atmosphere. Financially, it worked out for everybody. And it was just a better setup."
For more information on Artpark's summer season, or for tickets, visit www.artpark.net. 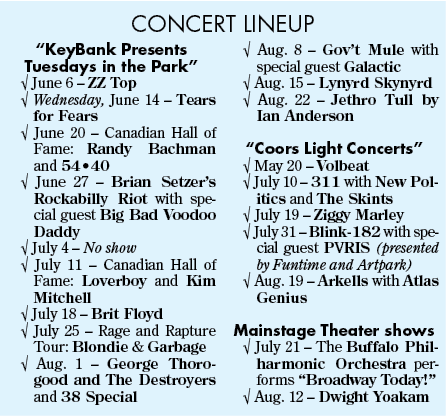