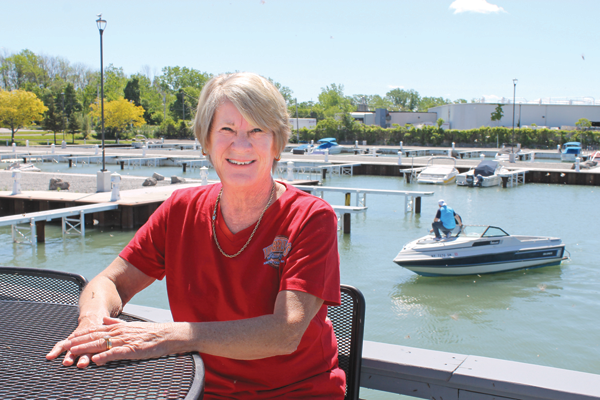 Christy Vukelic sits outdoors at Lumberjack's Patio Grill, the restaurant she co-owns with her sister, Carol Tallichet. The restaurant, at 1000 River Road, North Tonawanda, is adjacent to Gratwick Riverside Marina.

Fri, Jun 9th 2017 03:05 pm
Restaurant combines local menu, scenic waterfront venue
Story and photos by Karen Carr Keefe
Lumberjack's Patio Grill is finding its niche along the Niagara River and drawing customers who love the food and the view.
"We're excited. We're happy to be in our fifth year," said co-owner Christy Vukelic. "The City of North Tonawanda has been good to us, and we're trying to be good back."
Vukelic, who owns the restaurant with her sister, Carol Tallichet, is a Tonawanda native who grew up along the Niagara River. She and Tallichet not only run Lumberjack's, they also manage and collect dock fees for the city-owned Gratwick Riverside Marina. "We've had a great working relationship with the City of North Tonawanda, Vukelic said. The city and Lumberjack's share proceeds from both the restaurant and the marina.
Over the past five or six years, the city has dredged the marina, put in new docks and installed new lighting, electrical, walkways, pathways and landscaping with Niagara River Greenway funds, grants from the state and federal governments and city coffers, said North Tonawanda Mayor Arthur Pappas. "It's all new,"
He said the total cost of the renovation has been $3,150,350. Of that, $308,000 came from the New York State Dormitory Authority; $687,000 from the federal government; $600,000 from Greenway funds; and $1,555,000 from the city.
The marina renovation is expected to be a boon for boaters and a draw for the restaurant. "This is really the first season it's been completed. Just about all the phases are done," Pappas said. All that remains are finishing touches, such as landscaping, he added.
In turn, Tallichet and Vukelic, with private investment, have transformed the former Niagara River Yacht Club from a vacant building to a vibrant dining venue.
"Carol saw the building was empty - it had been vacant for about seven years. ... She saw the potential to put a restaurant in," Vukelic said. "It was part of Lumberjack's contract and arrangement with the city to upgrade the dock facilities. We lease this from them."
Portions of the dock facilities were open last year. "This year, we're fully ready to go." 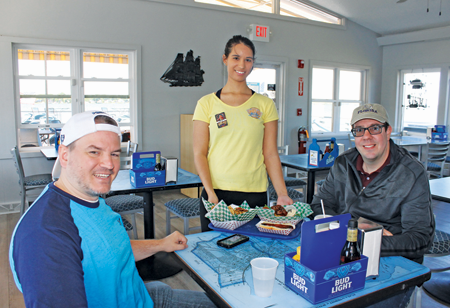 Delia Torres serves lunch to Jay Slater, left, and Tim Weibel of Grand Island at Lumberjack's Patio Grill. Shown below is part of a ceiling mural that shows historic scenes from the area near the current restaurant on River Road. 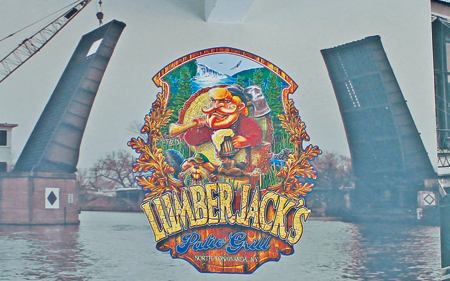 They do seasonal boat slips and jet ski slips. "One nice thing about our marina is we have the break wall, so the current isn't as bad as a lot of the marinas on the river," Vukelic said.
Lumberjack's has a menu that aims to please the local palate, with fish frys seven days a week. "We use Labatt's beer in our mixture, so we call it a Labatt-ered fish fry," Vukelic joked. She said some customers will order ahead for takeout.
The restaurant is open seven days a week, from 11 a.m. to 9 p.m. They open around Memorial Day and close around the beginning of October, mostly because of the change in weather and the availability of employees.
"All our food is local," Vukelic said. "We do Anderson's ice cream, Wardynski's hot dogs, Costanzo's rolls, Mineo & Sapio Italian sausage. Everything is done in house," she added. "Our burgers are never frozen - they're made every day, fresh." Their french fries are curly-cue fries, which are done in house. "We really try to use all local products."
Their serving staff and managers are local, too. "We contact the high schools to get most of our employees. Most of our managers are schoolteachers," Vukelic said.
From 4-8 p.m. on Saturdays, Deja2 performs at Lumberjack's. They describe themselves as "a stylish duo that plays music for all occasions, featuring diverse artists and covering standards, oldies, blues, rock, country and pop."
New to Lumberjack's menu are champagne splits. The restaurant serves beer and wine, but doesn't want to do a full range of alcoholic beverages.
"We're a family restaurant; we really don't want to be a nightclub," Vukelic explained.
Weekends are their busiest days. Being right next to Gratwick Riverside Park is a boost, as well. "We see a lot of business when the boat races come, and the concerts," she said.
"We can seat 158 people on our deck. We have a great deck - great sunsets," Vukelic said. "Inside, we can accommodate 63 people. Once the marina's full, we'll have a lot of boat action." She said boaters have access to restroom facilities that are strictly for them that the city has put up. Lumberjack's hopes to have two outdoor fire pits installed, with outside seating around them.
The customer base is varied and the reviews are good. "Yesterday, we had out-of-state people in who found us on Yelp. That was very encouraging," she said. "They're like, 'We love it here, rather than driving downtown to find a waterfront spot.' "
With the locals, Lumberjack's has its regulars. Yet the restaurant is still making inroads. "I guess it's amazing how many people don't realize that we're here - that are local," Vukelic said. As to the boaters, "We think they'll be here a lot," she said.
"We're just welcoming everybody. We sell T-shirts and hats. We are just here for the local people and anybody else. It's amazing, once we get going, how many people from Amherst and Williamsville will be our regulars once or two days a week," Vukelic said.
Pappas also takes an optimistic view of the site's potential.
"Now that the place is finished off, we're seeing if it does well, we're certainly hoping that the person in there is successful," he said. "We don't want to see anybody not be successful. The proceeds up to this point have not been what we expected, but we were hoping that this year, now with everything complete, that it will improve in terms of docking and restaurant intakes and so on," he said. "The city does get a certain percentage of the restaurant profits, and the same with the marina, so that now things are in order, we hope that it certainly will be successful."
"It's been kind of a long time in completing and things don't always go as fast as you'd like them to," the mayor said. "This started with a past administration and we've been working, taking over from where they left off and just moving it forward to completion. And now we hope that both the city and Carol Tallichet and her crew benefit," he said.
"We want everybody to benefit and we want it to be a nice place on the water," Pappas said. "It's got a magnificent view, and we want people to certainly be aware of it and hopefully patronize it, so that everybody's successful, including the ones that stop to eat and dock their boats."
Lumberjack's Patio Grill is located at 1000 River Road, North Tonawanda. 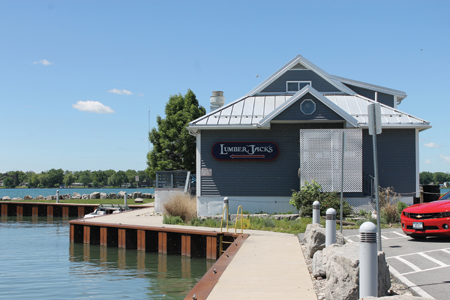