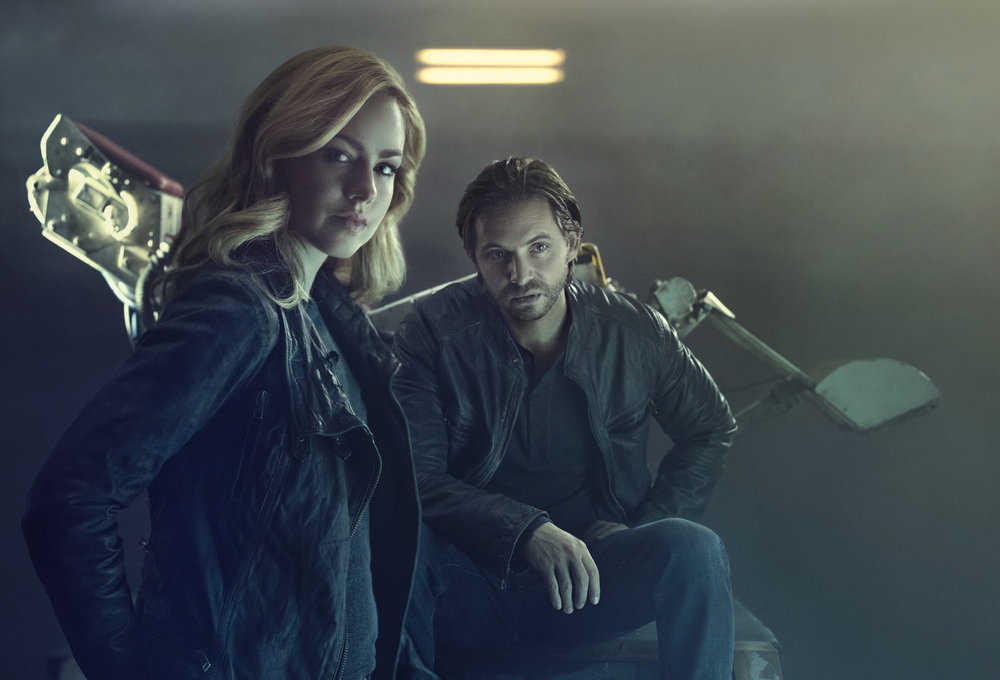 by jmaloni
Fri, May 19th 2017 07:50 am
Aaron Stanford and Amanda Schull praise Syfy's plan
Behind the Screens with Joshua Maloni
When a television show is as complex and action-packed as Syfy's "12 Monkeys," it can be hard to wait a week for the next episode. The plot demands attention to detail, and the gripping storyline leaves audiences eager to see what will happen next.
Thanks to streaming services such as Netflix, Amazon Prime and Hulu, the practice of "binge-watching" has become not just acceptable, but a regular habit for TV viewers.
Recognizing these points, the Syfy Network opted to roll out the third season of "12 Monkeys" as a three-night "binge-a-thon." All 10 episodes will debut this weekend, airing from 8-11 p.m. Friday through Sunday.
Series stars Aaron Stanford (James Cole) and Amanda Schull (Dr. Cassandra Railly) said they like this idea, and think fans will, too.
"I think it's a good thing, because that's the way I like to watch TV," Stanford said. "You know, I think as you said -- this show definitely, definitely lends itself to binge-watching. Every single episode ends with a huge cliffhanger and you can't wait to find out what happens next. And there's so much going on that if you're able to marry, string some of these episodes together, honestly it's much easier to follow what's happening, you know, if you can consume multiple episodes in one sitting.
"So I think it very much works for this show in particular. And I just think it's the future. It's clear that's how people want to watch -- that's what it's all moving towards -- and I think this is just a step in that direction."
That said, Schull said, "You don't have to binge every single episode in that sitting. You can TiVo it, watch a couple, take a break, come back, watch a couple more before in the morning, and then watch a couple more at night.
"You know, I, too, tend to watch a lot of my favorite programming more than one episode at a time. I think it's a little bit antiquated that people sit through weekly episodes now.
"And it was exciting also for us, because it had been a long time in the making. We had a very long hiatus between seasons two and three. And it's exciting for us to finally get it all out there -- the result, the product of our hard work and anticipation, and to finally be able to share it with the people who care about it as much as we do."
Catch up with "12 Monkeys" on the Syfy website.
Categories
Entertainment Entertainment Top Story TV and music