Shinny Clause, left, and Sire Jacobs stand in front of the grill inside Jay's Place.

Record number of votes cast in 2017

By now, we've all heard the phrase "Good things come in small packages."

When it comes to Jay's Place, it might be said, "Big flavor comes from a small kitchen."

Indeed, the eatery is compact. But what the diner lacks in tables and chairs it made up for in fan votes, easily taking the title in Niagara Frontier Publications' 2017 "Best Fish Fry Contest."

"Honest and truthfully, I wasn't really surprised," Shinny Clause of Jay's Place said. "If you've had our fish, then you would know exactly why people come to us."

"We do more of to-go orders than we do sit-down, because we're in such a small scale here," she added. "But's it nice. Hometown. We get a lot of people that are local consistently come - almost every day."

Clause said, "Haddock is what draws people in. Not cod."

"The quality that he does - he knows all the little secrets to bring out the flavor of fish," she said.

"I think we always had a great fish fry. I think he just brought it out the best (in the past year)," Clause noted.

She said the key to Jacobs' success is "The preparation."

"He takes pride in getting the fish ready beforehand. We can't give you all our secrets! But I do know he definitely knows how to handle his fish," Clause said.

Jacobs said, "I spend time with it. I just don't take it and throw it in the fryer."

"I starting doing the fish when I was 15, in Syracuse," at a restaurant so popular its fish fry preparation was almost an assembly line, Jacobs said. Cooks would utilize a row of large deep-fryers to drop, grab and serve product as quickly as possible. "On a Friday, they would go through 2,000 pounds of fish."

Today, with 17 years of fish fry dinners under his belt, "I do it the way I want to eat it," he said. 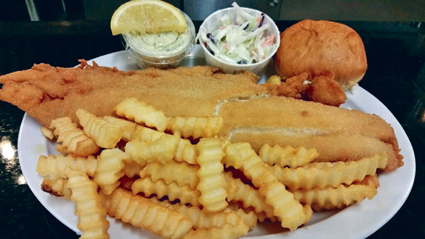 "That's the way we serve all of our food around here," Clause said. "We don't cut corners. It's nothing I wouldn't serve in my own home."

To that end, "He maintains the oil on a regular basis, and that's very important," Clause said. "If you get old oil, and you try to cook something in it, you had that horrible taste. It's like an aftertaste, almost. We take pride, because he takes care of the fryers so well. People comment that they know.

The restaurant is a popular breakfast destination, and offers two menu pages of morning meals. Fish is served on Fridays, year-round, and also comes in sandwich ($5) and platter ($11.50) form. Fries can be added to the former for just $1.25 more, while the latter includes scallops, shrimp and clam strips.

Sandra and John Eddy are two staunch Jay's Place supporters. In voting, she wrote, "The people are so friendly and the fish is sooo good." He noted, "It is so flaky," and "It comes with great sides."

"They were here when (the results were revealed)," she said.

"They've supported us all over," Clause added. "I think, when they know a good thing, they want other people to know about it." 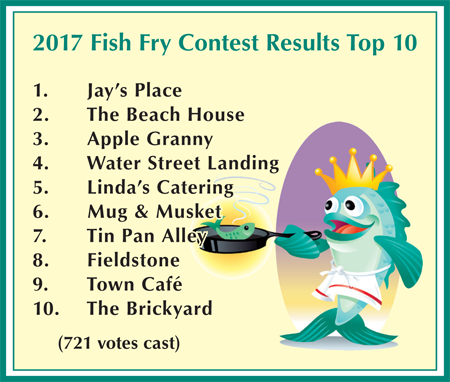