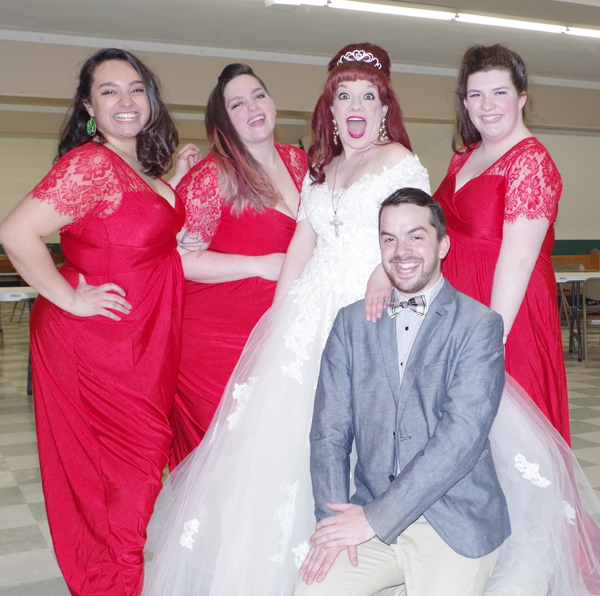 You're invited to 'Tony n' Tina's Wedding' at DoubleTree

Not only is there no fourth wall in Theatre in the Mist's upcoming production of the comedy "Tony n' Tina's Wedding," there are no walls of any kind.

Part scripted comedy, part improve, the show about the wedding of a Niagara Falls couple is so authentic, interactive and immersing that bride-to-be Tina Vitale, played by Maria Droz, said "You can bring a gift, if you like."

The show stars Michael Seitz as Tony Nunzio and Droz as Tina Vitale, a Bridezilla, who will tie the knot at the DoubleTree by Hilton hotel April 21-23.

"It's just like going to an actual wedding. There's laughter, there's tears, there's food, and there's drama," Droz said of the show. "So if you are coming to this wedding, be prepared to celebrate with the bride and groom, see some family you haven't seen in years, and catch up."

Whether they know it or not, the audience is in a supporting roll as well. Droz said the cast will drink, eat, talk and have fun with the audience just like at a real Italian wedding.

"As soon as we walk in the door for rehearsal, we are in character, and so throughout the entire rehearsal process, we have to come up with our character, down to our street address," Droz said.

The same applies on show night at the DoubleTree. Bucheker performed the show at Shea's and off-Broadway in New York City. He said when Tony and his groomsmen walk into the DoubleTree by Hilton, they are in character the moment they hit the ballroom.

"We cannot break character until we get in our cars and go home for the night," Droz said.

There is a plot and a script that is followed, but how it is followed is up to the cast. It makes for a different theater dynamic that audiences have loved for more than a decade that the show has been performed.

"On stage, you're larger than life. On stage, you have an entire audience to captivate, and they're watching you. When you're in something like a dinner theater, you're walking around and interacting with the audience. It is so important that you're constantly in character because you don't know who's watching," Droz said.

"If they see the gag coming, and they see it as a gag, they're not going to buy you," Bucheker said. "It should feel as real as possible so it's almost creepy to them at one point."

Droz thinks the audience will see people they know in the characters in the wedding.

"I think it's really cool because I'm Italian, in real life, and there's a lot of parallels between an actual real Italian wedding and this wedding," Droz said. "So I think people can relate."

Theatre in the Mist will present "Tony n' Tina's Wedding" for dinner and a show at the DoubleTree by Hilton, 401 Buffalo Ave., Niagara Falls. The "wedding" takes place for three shows April 21-23: Friday and Saturday at 7 p.m. and Sunday at 2 p.m. For more information, call toll-free at 877-856-0694 or visit www.theatreinthemist.org.